Arielle has been spending her time in lockdown getting creative with unexpected materials (Picture: Arielle Sidney)

Arielle Sidney, 22, is proving that your carrier bags don’t have to be doomed to gather dust in the cupboard under the sink.

Sure, you can actually keep using them for shopping. That’s one option.

Or, you can follow in Arielle’s lead and turn all those old bags for life into something amazing.

Arielle, a student at the University of California, has managed to transform different store bags into outfits – and the end results are genuinely impressive.

‘I was bored in quarantine and learning to sew sounded like a fun project,’ Arielle tells Metro.co.uk. ‘One day I went to Ikea with a friend and he suggested – more like dared me – to make an outfit out of the Ikea store bags.

‘As a joke, I decided I would do it. Fast forward a few months, I have made five of them.’

The student’s project began with a dress made from Ikea bags (Picture: Arielle Sidney)

The idea started as a joke (Picture: Arielle Sidney)

So far, Arielle has turned her hand to making designs from Ikea, Walmart, Target, Vans, and Trader Joe’s bags.

These aren’t just your average, hastily put together anything-but-clothes-party cover-ups, to be clear, but proper looks that could pass for a hyped-up streetwear label.

Each project starts with tearing apart the fabric bags and cutting out pattern pieces.

These are pinned, sewn, then Arielle tries the items on to check the fit.

This entire outfit is made from Trader Joe’s bags (Picture: Arielle Sidney)

‘The Ikea dress was the second ever garment I’d ever made so I had no idea what I was doing and it took me about three days,’ the student tells us. ‘I made a few accessories with the leftover fabric.

‘The Target outfit took about one and a half days it was a fairly simple outfit. The Vans outfit took three days – I did not have enough bags of the same design so mix-matching the design for the jacket took forever.’

Once each outfit is done, Arielle grabs her camera and snaps some cool pics and video for her TikTok.

And this one is made from Vans carrier bags (Picture: Arielle Sidney)

While the idea started as a joke, Arielle now hopes that her work will show people the hidden potential of items we usually chuck away without a second thought.

‘I decided to show the world you can make clothes out of literally anything,’ she explains. ‘The project also got me thinking about the number of bags I have from stores.

‘Maybe if stores only offered canvas bags rather than plastic bags, then if it breaks it can easily be recycled into clothing or rugs rather than more plastic being thrown away.’

Yes, that is a matching mini bag and earrings (Picture: Arielle Sidney)

The reaction online has been glowing. Along with praising Arielle’s skills, lots of people have commented to say they’ll be trying to make their own shopping bag outfits.

‘When I went to Ikea in the Ikea bags outfit both workers and shoppers loved it, a few even asked for photos,’ Arielle added. ‘Online almost everyone likes the outfits too.

‘It’s been really fun reading comments about how much people like them because when I posted them I had a very small following on TikTok and did not expect so many people to actually see the videos.’

What’s next for Arielle? More creative approaches to fashion, and spreading the word about slowing down our throwaway culture.

And finally, this dress used to be a bunch of Walmart bags (Picture: Arielle Sidney)

She tells us: ‘I plan to continue making clothes out of anything I can get my hands on.

‘So far I’ve made outfits out of a tapestry, curtains, bandanas, a canvas painting, and random pieces of fabric I’ve found at thrift stores and of course, recycled clothes.

‘I want to encourage people to recycle their old clothing by cutting it up and turning it into something else or even just dyeing. 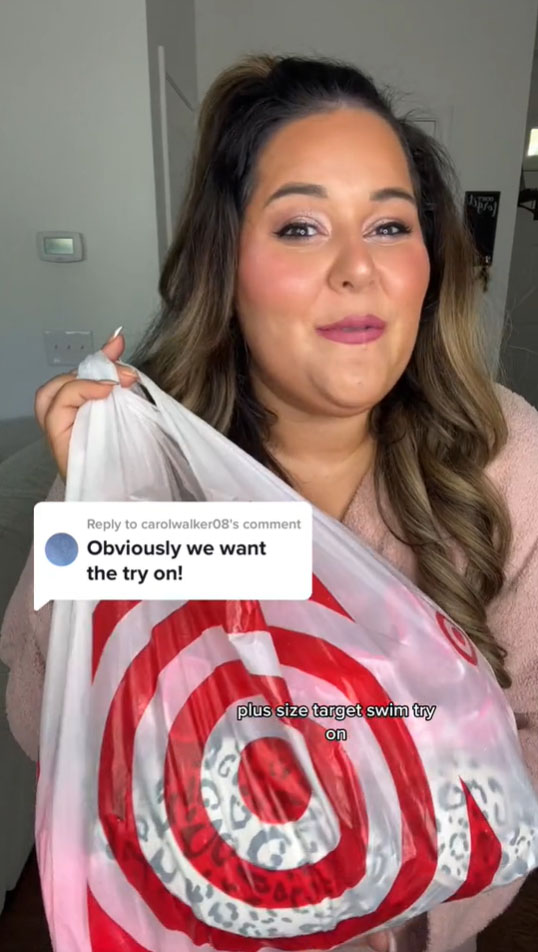 Plus-Size Target Haul: Flattering & Comfortable Except for One Item