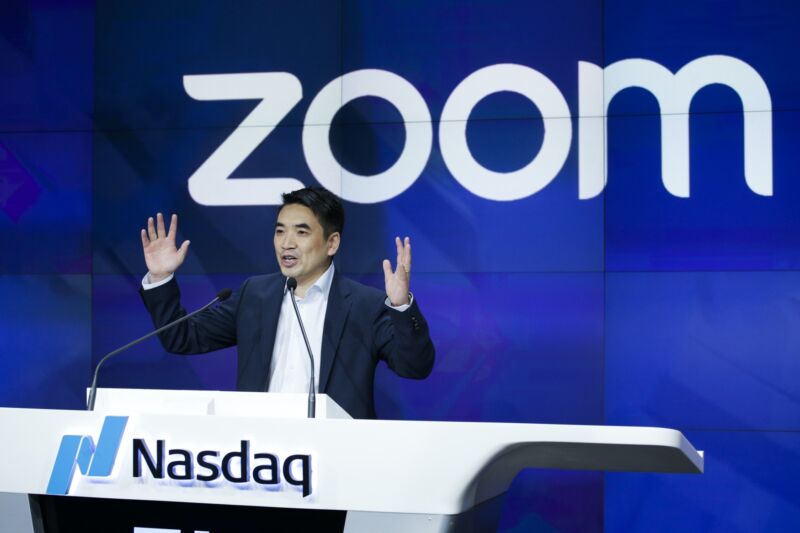 Enlarge / Zoom founder and CEO Eric Yuan speaks before the Nasdaq opening bell ceremony on April 18, 2019, in New York City as the company announced its IPO.

Zoom has agreed to upgrade its security practices in a tentative settlement with the Federal Trade Commission, which alleges that Zoom lied to users for years by claiming it offered end-to-end encryption.

“[S]ince at least 2016, Zoom misled users by touting that it offered ‘end-to-end, 256-bit encryption’ to secure users’ communications, when in fact it provided a lower level of security,” the FTC said today in the announcement of its complaint against Zoom and the tentative settlement. Despite promising end-to-end encryption, the FTC said that “Zoom maintained the cryptographic keys that could allow Zoom to access the content of its customers’ meetings, and secured its Zoom Meetings, in part, with a lower level of encryption than promised.”

The FTC complaint says that Zoom claimed it offers end-to-end encryption in its June 2016 and July 2017 HIPAA compliance guides, which were intended for health-care industry users of the video conferencing service. Zoom also claimed it offered end-to-end encryption in a January 2019 white paper, in an April 2017 blog post, and in direct responses to inquiries from customers and potential customers, the complaint said.

“In fact, Zoom did not provide end-to-end encryption for any Zoom Meeting that was conducted outside of Zoom’s ‘Connecter’ product (which are hosted on a customer’s own servers), because Zoom’s servers—including some located in China—maintain the cryptographic keys that would allow Zoom to access the content of its customers’ Zoom Meetings,” the FTC complaint said.

The FTC announcement said that Zoom also “misled some users who wanted to store recorded meetings on the company’s cloud storage by falsely claiming that those meetings were encrypted immediately after the meeting ended. Instead, some recordings allegedly were stored unencrypted for up to 60 days on Zoom’s servers before being transferred to its secure cloud storage.”

To settle the allegations, “Zoom has agreed to a requirement to establish and implement a comprehensive security program, a prohibition on privacy and security misrepresentations, and other detailed and specific relief to protect its user base, which has skyrocketed from 10 million in December 2019 to 300 million in April 2020 during the COVID-19 pandemic,” the FTC said.

No compensation for affected users

The settlement is supported by the FTC’s Republican majority, but Democrats on the commission objected because the agreement doesn’t provide compensation to users.

“Today, the Federal Trade Commission has voted to propose a settlement with Zoom that follows an unfortunate FTC formula,” FTC Democratic Commissioner Rohit Chopra said. “The settlement provides no help for affected users. It does nothing for small businesses that relied on Zoom’s data protection claims. And it does not require Zoom to pay a dime. The Commission must change course.”

Under the settlement, “Zoom is not required to offer redress, refunds, or even notice to its customers that material claims regarding the security of its services were false,” Democratic Commissioner Rebecca Kelly Slaughter said. “This failure of the proposed settlement does a disservice to Zoom’s customers, and substantially limits the deterrence value of the case.” While the settlement imposes security obligations, Slaughter said it includes no requirements that directly protect user privacy.

Zoom is separately facing lawsuits from investors and consumers that could eventually lead to financial settlements.

The Zoom/FTC settlement doesn’t actually mandate end-to-end encryption, but Zoom last month announced it is rolling out end-to-end encryption in a technical preview to get feedback from users. The settlement does require Zoom to implement measures “(a) requiring Users to secure their accounts with strong, unique passwords; (b) using automated tools to identify non-human login attempts; (c) rate-limiting login attempts to minimize the risk of a brute force attack; and (d) implementing password resets for known compromised Credentials.”

The FTC complaint and settlement also covers Zoom’s controversial deployment of the ZoomOpener Web server that bypassed Apple security protocols on Mac computers. Zoom “secretly installed” the software as part of an update to Zoom for Mac in July 2018, the FTC said.

“The ZoomOpener Web server allowed Zoom to automatically launch and join a user to a meeting by bypassing an Apple Safari browser safeguard that protected users from a common type of malware,” the FTC said. “Without the ZoomOpener Web server, the Safari browser would have provided users with a warning box, prior to launching the Zoom app, that asked users if they wanted to launch the app.”

The software “increased users’ risk of remote video surveillance by strangers” and “remained on users’ computers even after they deleted the Zoom app, and would automatically reinstall the Zoom app—without any user action—in certain circumstances,” the FTC said. The FTC alleged that Zoom’s deployment of the software without adequate notice or user consent violated US law banning unfair and deceptive business practices.

Amid controversy in July 2019, Zoom issued an update to completely remove the Web server from its Mac application, as we reported at the time. Advertisement

The proposed settlement is subject to public comment for 30 days, after which the FTC will vote on whether to make it final. The 30-day comment period will begin once the settlement is published in the Federal Register. The FTC case and the relevant documents can be viewed here.

The data deletion part of the settlement requires that all copies of data identified for deletion be deleted within 31 days.

Zoom will have to notify the FTC of any data breaches and will be prohibited “from making misrepresentations about its privacy and security practices, including about how it collects, uses, maintains, or discloses personal information; its security features; and the extent to which users can control the privacy or security of their personal information,” the FTC announcement said.

Zoom will have to review all software updates for security flaws and make sure that updates don’t hamper third-party security features. The company will also have to get third-party assessments of its security program once the settlement is finalized and once every two years after that. That requirement lasts for 20 years.