What could the future of the Internet look like? With the digital world of the 21st century becoming a pit of unwanted ads, tracking, paywalls, unsafe content, and legal threats, “Wayforward Machine” has a dystopian picture in mind. Behind the clickbaity name, Wayforward Machine is an attempt by the Internet Archive to preview the chaos the world wide web is about to become.

Internet Archive suspects what the Internet of 2046 looks like

The Wayback Machine from the nonprofit Internet Archive remains massively popular among netizens, journalists, and archivists interested in seeing how a webpage looked in the past, even when the page or entire websites are later removed. Users can simply browse to web.archive.org to save a webpage or browse to the copy of a webpage as it appeared at an earlier date. As such, the 617 billion-pages-strong Wayback Machine has become an indispensable digital asset since its inception in 1996.

Whereas Wayback Machine allows you to go back in time, this week’s Internet Archive has come up with a “Wayforward Machine” doing the opposite. Those visiting the Wayback Machine are now greeted with the following banner that claims to take you 25 years into the future.

“On the 25th anniversary of the Internet Archive, we’re looking forward to the year 2046. Will we have access to trustworthy information online? Will knowledge be free and open?” states the nonprofit.

At wayforward.archive.org, users can key in a webpage and hit “Go forward.”

In our tests, Ars expected to key in the URL to a webpage and see a modified version—how it may look 25 years later. To our disappointment, though, our tests revealed keying in virtually any webpage shows the same series of pop-up messages masking and blurring out the existing content of the webpage as it appears today: 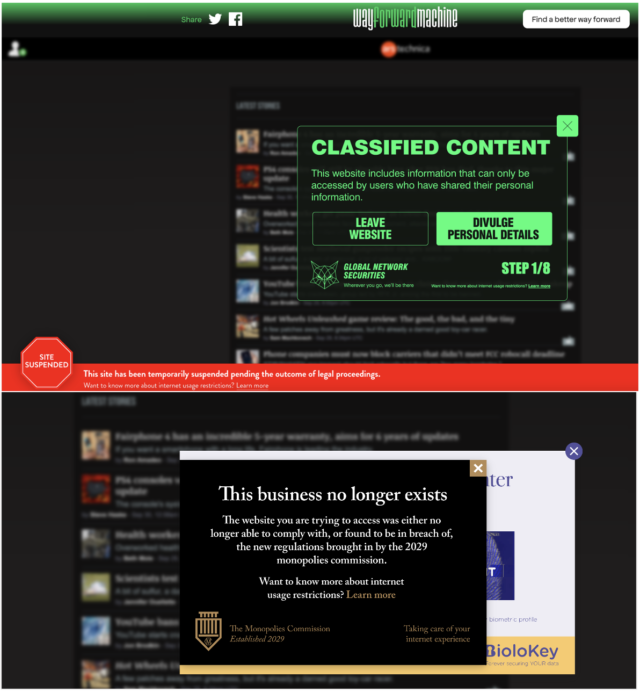 Ars saw a range of messages popping up on the Wayforward Machine after a URL was entered:

“Content on the site you are trying to access is protected by the Content Truth Gateway. We cannot guarantee the accuracy of free content,” followed by a dummy credit card payment form. Another message stated, “The content owner has made this content unavailable in your political block. The copyright on this material has been extended for an additional 200 years,” among others.

And then it becomes clear: the whole purpose of the satirical Wayforward Machine is to raise awareness about the ongoing threats to the Internet and to libraries like the Wayback Machine, which plays a prominent role in preserving historic content and the truth, as it appeared in the past.

Last year, four of the nation’s leading book publishers sued the Internet Archive over Wayback Machine storing scanned copies of copyrighted books and making them available to the public on a site called the Open Library.

“The Internet Archive is facing a lawsuit by a cartel of corporate publishers that threatens the age-old right of libraries to buy, preserve and lend materials to the public. To fight for a world where libraries and learners are empowered through access to information, join our #EmpoweringLibraries campaign,” reads the ‘IA2046’ landing page.

The initiative has been joined by privacy advocates and digital rights groups including the Electronic Frontier Foundation (EFF), Mozilla, Fight for the Future, and Wikimedia Foundation, among other major players.

For those who prefer to watch Wayforward Machine in action, here’s a video: