Enlarge / Turning the lens on ourselves, as it were.

Is Our Machine Learning?

There’s a moment in any foray into new technological territory that you realize you may have embarked on a Sisyphean task. Staring at the multitude of options available to take on the project, you research your options, read the documentation, and start to work—only to find that actually just defining the problem may be more work than finding the actual solution.

Reader, this is where I found myself two weeks into this adventure in machine learning. I familiarized myself with the data, the tools, and the known approaches to problems with this kind of data, and I tried several approaches to solving what on the surface seemed to be a simple machine learning problem: Based on past performance, could we predict whether any given Ars headline will be a winner in an A/B test?

Things have not been going particularly well. In fact, as I finished this piece, my most recent attempt showed that our algorithm was about as accurate as a coin flip.

But at least that was a start. And in the process of getting there, I learned a great deal about the data cleansing and pre-processing that goes into any machine learning project.

Our data source is a log of the outcomes from 5,500-plus headline A/B tests over the past five years—that’s about as long as Ars has been doing this sort of headline shootout for each story that gets posted. Since we have labels for all this data (that is, we know whether it won or lost its A/B test), this would appear to be a supervised learning problem. All I really needed to do to prepare the data was to make sure it was properly formatted for the model I chose to use to create our algorithm.

I am not a data scientist, so I wasn’t going to be building my own model anytime this decade. Luckily, AWS provides a number of pre-built models suitable to the task of processing text and designed specifically to work within the confines of the Amazon cloud. There are also third-party models, such as Hugging Face, that can be used within the SageMaker universe. Each model seems to need data fed to it in a particular way.

The choice of the model in this case comes down largely to the approach we’ll take to the problem. Initially, I saw two possible approaches to training an algorithm to get a probability of any given headline’s success:

The second approach is much more difficult, and there’s one overarching concern with either of these methods that makes the second even less tenable: 5,500 tests, with 11,000 headlines, is not a lot of data to work with in the grand AI/ML scheme of things.

So I opted for binary classification for my first attempt, because it seemed the most likely to succeed. It also meant the only data point I needed for each headline (beside the headline itself) is whether it won or lost the A/B test. I took my source data and reformatted it into a comma-separated value file with two columns: titles in one, and “yes” or “no” in the other. I also used a script to remove all the HTML markup from headlines (mostly some <em> and a few <i> tags). With the data cut down almost all the way to essentials, I uploaded it into SageMaker Studio so I could use Python tools for the rest of the preparation.

After that comes “tokenization.” AWS tech evangelist Julien Simon explains it thusly: “Data processing first needs to replace words with tokens, individual tokens.” A token is a machine-readable number that stands in for a string of characters. “So ’ransomware’ would be word one,” he said, “‘crooks’ would be word two, ‘setup’ would be word three….so a sentence then becomes a sequence of tokens and you can feed that to a deep learning model and let it learn which ones are the good ones, which one are the bad ones.”

Depending on the particular problem, you may want to jettison some of the data. For example, if we were trying to do something like sentiment analysis (that is, determining if a given Ars headline was positive or negative in tone) or grouping headlines by what they were about, I would probably want to trim down the data to the most relevant content by removing “stop words”—common words that are important for grammatical structure but don’t tell you what the text is actually saying (like most articles). 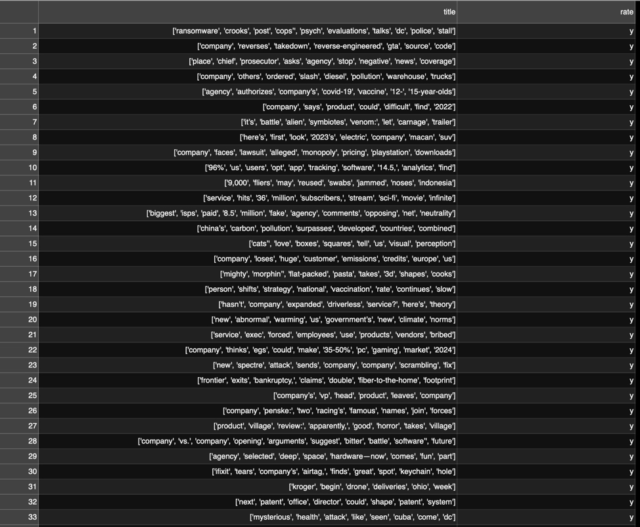 Enlarge / Headlines tokenized without stop words via Python’s Natural Language Tool Kit (nltk). Notice punctuation sometimes gets packaged with words as a token; this would have to be cleaned up for some use cases.

However, in this case, the stop words were potentially important parts of the data—after all, we’re looking for structures of headlines that attract attention. So I opted to keep all the words. And in my first attempt at training, I decided to use BlazingText, a text processing model that AWS demonstrates in a similar classification problem to the one we’re attempting. BlazingText requires the “label” data—the data that calls out a particular bit of text’s classification—to be prefaced with “__label__”. And instead of a comma-delimited file, the label data and the text to be processed are put in a single line in a text file, like so: 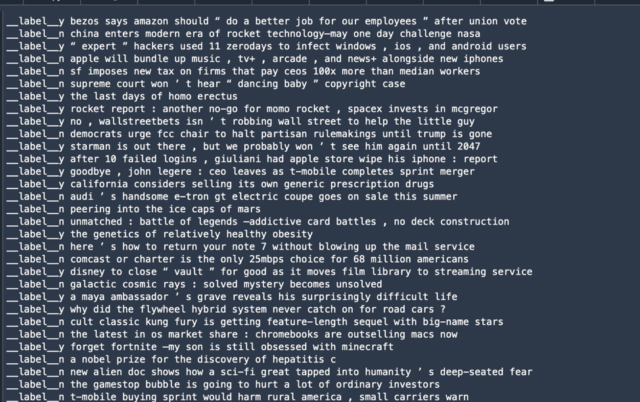 Enlarge / Data prepared for the BlazingText model, with headlines forced to lower case.

Another part of data preprocessing for supervised training ML is splitting the data into two sets: one for training the algorithm, and one for validation of its results. The training data set is usually the larger set. Validation data generally is created from around 10 to 20 percent of the total data.

There’s been a great deal of research into what is actually the right amount of validation data—some of that research suggests that the sweet spot relates more to the number of parameters in the model being used to create the algorithm rather than the overall size of the data. In this case, given that there was relatively little data to be processed by the model, I figured my validation data would be 10 percent.

In some cases, you might want to hold back another small pool of data to test the algorithm after it’s validated. But our plan here is to eventually use live Ars headlines to test, so I skipped that step.

To do my final data preparation, I used a Jupyter notebook—an interactive web interface to a Python instance—to turn my two-column CSV into a data structure and process it. Python has some decent data manipulation and data science specific toolkits that make these tasks fairly straightforward, and I used two in particular here:

Here’s a chunk of the code in the notebook that I used to create my training and validation sets from our CSV data: 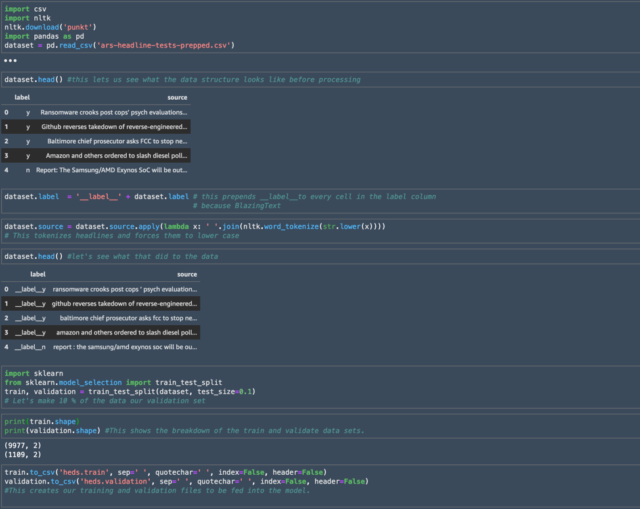 I started by using pandas to import the data structure from the CSV created from the initially cleaned and formatted data, calling the resulting object “dataset.” Using the dataset.head() command gave me a look at the headers for each column that had been brought in from the CSV, along with a peek at some of the data.

The pandas module allowed me to bulk add the string “__label__” to all the values in the label column as required by BlazingText, and I used a lambda function to process the headlines and force all the words to lower case. Finally, I used the sklearn module to split the data into the two files I would feed to BlazingText.

Hybrid Work Is Doomed – The Atlantic