With power comes pride. Consumed by a toxic ego, leaders tend to keep themselves central to every decision-making process they undertake, trying to color the company policies in their own image. Servant leadership principles such as “ Lead from Behind, Inclusive Approach, and Extreme Ownership” seem totally alien to them. In his classic, “Ego is the Enemy,” author Ryan Holiday cites examples of self-assured, obsessive, creative geniuses such as Steve Jobs and Kayne West,  known for their “my way or the highway” attitude.

On the contrary, servant leaders keep their hubris in check at every bend by making their employees feel valuable and comfortable. Servant leaders who believe in walking hand-in-hand with their employees as colleagues and not as their bosses. Stoic leaders who do not feel entitled or seek validation or gratification in the form of fatter paychecks.

This post attempts to find six different practices a CEO can adopt to make their employees feel like equals and not above them.

Servant leaders who lead with humility adopt decentralized decision-making practices, sit alongside employees, accept disruptions with open arms, and so on.  Let’s dive into these six different practices that CEOs can adopt to develop servant leadership styles without further ado.

For all I know, American best-selling author Cal Newport wouldn’t buy this idea as he reckons cubicles stand in the way of deep work. Newport’s book, “ Deep Work,” will convince you to give up on the idea of cubicles and look for isolated corners where distractions are minimal.

While Newport may dismiss the concept of cubicles, there is no arguing how CEOs of yesteryears have been leveraging the cubicle concept to bridge the CEO and employee gap. For starters, former intel CEO Andy Grove strongly believed that cubes facilitate CEO and employee collaboration. Over the years, several CEOs have tried to emulate his style of functioning and have been successful with it.

If you look at the present-day CEOs,  Facebook’s Mark Zuckerberg sits at a desk along with his employees, and so does Zappos CEO Tony Hsieh. Hsieh came up with a weird name, “Monkey Row”  ( as he dislikes the term “executive”) to describe the rows where he sits alongside his staff.  Likewise, you have former eBay CEO Meg Whitman and billionaire Michael Bloomberg who were zealous advocates of cubicles.

The biggest plus of sitting alongside your employees is that the CEOs get to know things they wouldn’t have if they were seated enclosed in their corporate suites. As Andy Grove admits in an interview with Businessweek’s profile, “the idea was to encourage constructive confrontation.” Simply put, when he was around, anybody could stop by and talk to him at length to the point that they could unabashedly speak their mind, as there was no fear of getting fired.

Living up to the spirit of the true servant-leadership model, some of the CEOs out there take just $1 a year as a paycheck. Why you may ask? One of the reasons could be that these CEOs have massive stock options and tend to make millions of them if the company is performing well.

I know what you are thinking? What if the company is not doing well? Simple: these CEOs get to pocket $1. I know such servant leaders are a rare species and the idea may sound a tad bit crazy; however, in one sense, it sends out a clear-cut message to the employees: “I don’t feel entitled. Or I am not seeking validation for my performance through fatter paychecks. All that matters to me is working towards company goals. Everything else is a byproduct. Period.” Some well-known leaders who drew $1 as paychecks include Sergey Brin, Larry Page, Mark Zuckerberg, Elon Musk, N.R Narayana Murthy, among many others. Interestingly, even Muhammad Ali Jinnah accepted only one rupee as salary when he was appointed the first governor-general of Pakistan.

In other words: Bridge the gap between boss and employees by participating in the latter’s routine activities.

One of the best examples of servant leadership could be in the form of CEOs who are more than happy to share employee washrooms, restrooms, and lunchrooms like the CEO of my company does. The idea is to do away with all sorts of barriers that make them look separate from their employees. One way to smell like your flock is to take a leaf out of Tesco PLC’s book – a company with operations spanning Europe, Asia, and North America and is the U.K.’s largest grocery seller. Guess what did the bosses of Tesco PLC do to smell like their employees? Implemented TWIST – Tesco Week in Store Together.

Shedding light on this program, author Jeffery Krames in his unique leadership book: Lead with Humility- 12 Leadership Lessons from Pope Francis, shares that the unique program brought all front-end executives and managers of distribution departments to focus on traditional store operations for a week, every year. As part of store operations, the managers and their direct reports managed all processes, from the back door to the shop floor. They also played the role of customer assistant:

Such collaborative leadership style brings people on the top of the ladder closer to those who do the actual work, not to mention helps them know customers inside-out. One can also take cues from former CEOs like Bill Hewlett, and David Packard, who regularly conducted MBWA – Manage By Walking Around. The idea was to hold informal discussions with their employees, which, in turn, would aid them to have a pulse on the inner workings of every department.

Inclusive leadership takes into account employees’ views and perspectives, mitigating their own biases and preferences to ensure informed decision-making.  Servant leaders hold an inclusive approach and do not consider diverse talent as a drawback.  In fact, they look at it as a competitive advantage that helps them drive organizational goals. P&G is a fantastic example of inclusive leadership. Geraldine Huse, CEO & chairman of the board, P&G Central Europe, believes the more diverse the team, the more debate and disagreement they have, the better the outcome.

In fact, Salesforce has taken it a step ahead by launching a module on inclusive leadership dubbed as “Trailhead” to help interested professionals hone their skills in this domain. Iliana Quinonez, director, solution engineering, and LatinoForce leader at Salesforce, is quite clear in the head as to what it means to be an inclusive leader as she pointedly states that the onus lies on the management to create a conducive environment where people can be vocal about their grievances without any fear.

A pragmatist has their pulse on the world and refuses to rest on laurels. When a firm becomes insular and decides to rest on its laurels, it dies from within. Intel is one of the globally renowned brands that chose status quo over pragmatism and then quickly pivoted to thrive. The company was almost on the verge of shutting down when it encountered a critical inflection point for its core product, memory chips, from Japanese manufacturers until it went ahead and launched a new flagship product: microprocessors.

Another example of a brand that chose status quo over pragmatism was Blackberry. Previously known as the king of mobile devices, the company is unlikely to reclaim its lost luster unless it becomes pragmatic and ushers in a few changes in the form of relevant strategies.

A pragmatic leader sees the world as it is and not as they wish to see it. Therefore, they show a willingness to experiment with disruptions, fully realizing that disruptions are the only way forward for companies in the future. Sitting on product leads, notably in the technology domain, is the perfect recipe for disaster.

To ensure a smooth decentralized decision-making process, leaders need to hire well-trained professionals who are quite capable of handling responsibilities.

Johnson and Johnson, a medical device and diagnostics company known for its baby oil and bandages, follows a decentralized structure. The company prefers local management to run its businesses because they feel they understand the customer better; in addition to being familiar with government and marketplace needs. And in case if they make mistakes, the whole organization doesn’t have to face the consequences.

Leaders lead from behind

Authentic leaders have their employees back. They willingly sacrifice their special privileges to ensure a better collaborative work environment. Consequently, they are more successful than self-absorbed leaders who tend to spend most of their time inside their heads, divorced from ground realities and employee viewpoints.

Real leaders who are known to roll up their sleeves and get their hands dirty are respected and revered in the business world. Wish to hone your leadership skills in the true sense of the word? Read books or take up a few leadership courses. It helps, for not everyone is a born leader.

Image Credit Inner Article: Provided by the author; Thank you!

Boosting Your Business Using Visuals That Resonate With Your Audience

Millennial Internet Tics Have Gone From Cool to Cringey

6 Benefits of Blockchain and IoT to Propel Market Growth

The Pros and Cons of a 4-Day Workweek 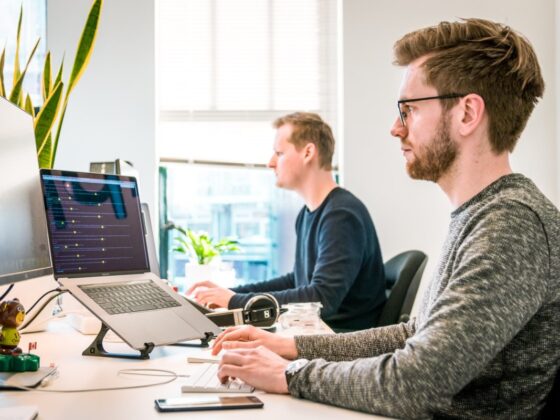 How to Advance Your Career as a Software Developer