WEST HAM fans have been BANNED from attending the club’s away trip to Rapid Vienna after ‘crowd disturbances’ against Genk.

The Hammers have also been hit with a £29,000 fine by Uefa, who have banned them from selling away tickets for their next Europa League match.

West Ham fans have been banned from attending the club’s away trip to Rapid ViennaCredit: Daniel Chesterton/phcimages.com

A Said Benrahma double looked to have put West Ham on the way to an away win in Belgium.

But then a late Tomas Soucek own goal meant the points were shared.

A flare was thrown onto the pitch after Benrahma’s second, which has cost West Ham £4,000.

But the other £25,000 penalty is following ‘crowd disturbances’ in the match, Uefa announced.

On West Ham’s website, it says the away tickets for the trip to Rapid Vienna are sold out.

But Uefa have now prohibited away fans from attending the European clash in Austria.

West Ham United can confirm that we have received an email late this afternoon informing us that we are subject to sanctions from UEFA in relation to our Europa League Group H fixture against KRC Genk on Thursday 4 November.

The Club has been fined 34,500 Euros and also informed that our supporters are unable to travel for our next Europa League away fixture.

The Club are urgently seeking clarification from UEFA, particularly given the extremely short notice of the sanction, which will impact our supporters who have already bought tickets and made arrangements to travel to Austria our match at Rapid Vienna in just over a week.

We are surprised to receive these sanctions and disappointed for the fans who have behaved impeccably and supported the team throughout and will now be unable to travel to the next away Europa League fixture.

The Club has requested the full written reasons from UEFA regarding these sanctions and have asked them to expedite our request given that further delay could impact supporters once again.

The Club fully appreciates that supporters will have booked return travel and accommodation in Austria and are stressing this in our dialogue with UEFA. We will update supporters as soon as we are able to with further information.

Finally, we would like to assure those supporters who have already purchased one of the 1,700 tickets that sold out our allocation for this game that they will be automatically refunded by the Club should UEFA rule the sanctions stand and that they relate to next week’s match in Austria. 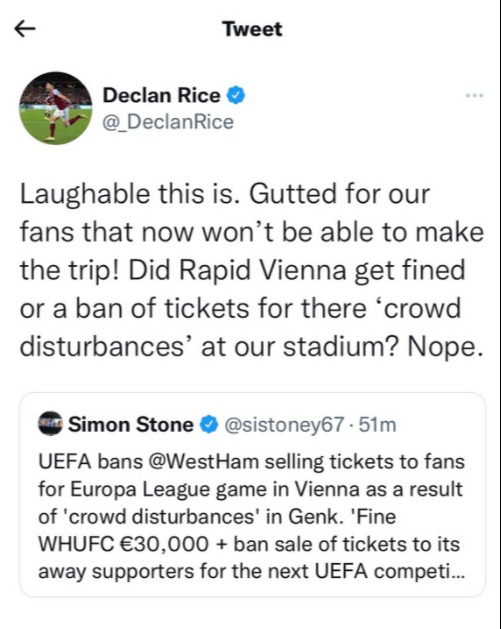 In a now-deleted tweet, Declan Rice, 22, posted: “Laughable this is. Gutted for our fans that now won’t be able to make the trip!

“Did Rapid Vienna get fined or a ban of tickets for there (sic) ‘crowd disturbances’ at our stadium? Nope.”

One Hammers fan lost his FINGER in a gruesome accident in Genk.

A video showed the end of the finger on the other side of a railing in the away end, with the apparent victim nowhere to be seen.

Fellow fans were heard urging stewards to put it on ice – with some claiming it took up to ten minutes for them to act.

It is understood the unhappy Hammer later received medical attention.

Witnesses in the away end believe the horror incident happened after Benrahma had scored the second goal on 82 minutes.

Fans were seen banging their hands against the metal fences during wild celebrations.