THOMAS FRANK switched from football manager to bar manager at the famous Brentford boozer The Griffin.

The Bees boss stunned punters by pouring pints as he stuck to a promise he made to me when the club were promoted to the Premier League. 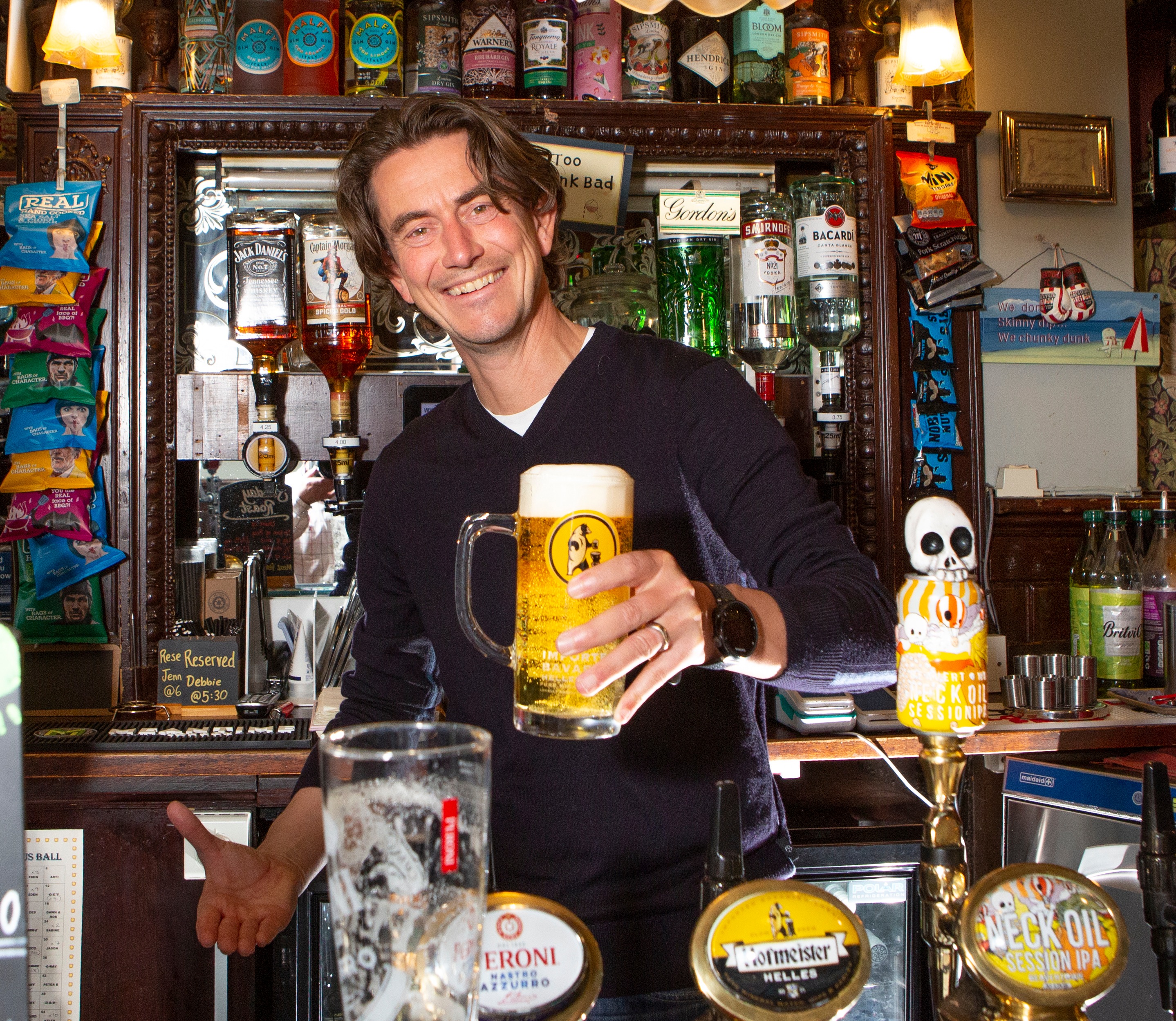 Frank shows off the perfect frothy head for a pint of German lagerCredit: DAVE PINEGAR 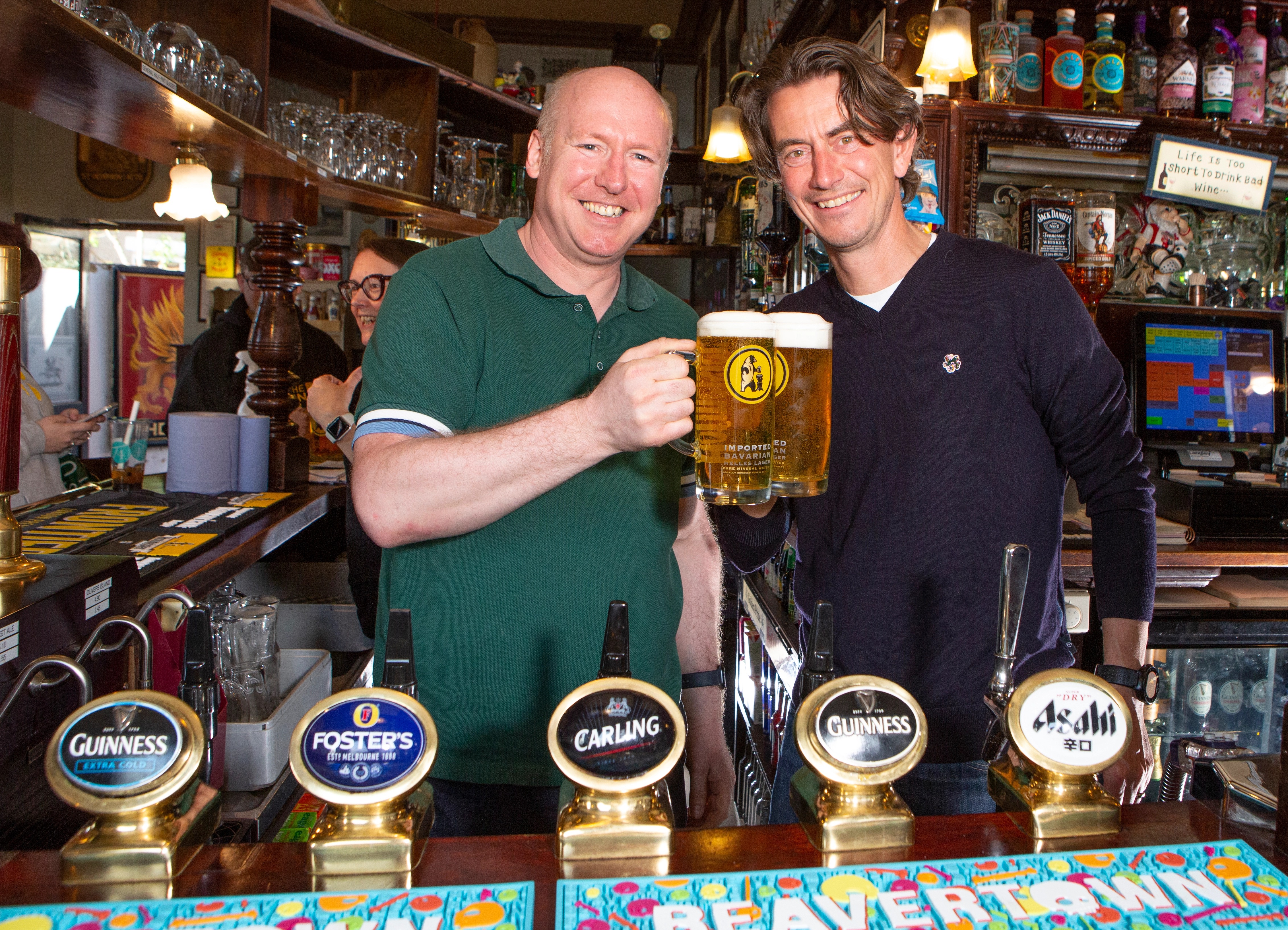 Frank pledged he would celebrate by having beers with me in each pub on the corners of the club’s old Griffin Park home.

But, because of strict Covid regulations, we were unable to organise the knees-up.

However, having ticked off enjoying drinks at The New Inn and now-closed The Princess Royal, we settled for afternoon jars at The Griffin to reflect on the club’s historic first season in the Premier League.

Landlady and diehard Brentford fan Claire Peleschka invited us behind the bar and Frank poured us Bavarian lager Hofmeister — and he did a grand job.

He laughed: “I’ll let you into a secret. I reckon I’d have been a bar tender had I not become a teacher and then a football coach!”

Claire said: “If this football management thing doesn’t work out, I could do with some extra staff.”

Apart from a small bit of “wastage” as some lager frothed up and spilled out of the top of the glass, it was an impressive effort before we headed to the sun-kissed beer garden to talk football.

Despite having the league’s smallest budget, the Bees hammered reigning world and European champions Chelsea 4-1 away, beat Arsenal 2-0, took a point off Liverpool and Tottenham and completed the double over West Ham.

And the club branded “just a bus stop in Hounslow” go into their last two games safe from relegation while their more illustrious opponents — Everton away today and Leeds next weekend — face the threat of crashing into the Championship.

Frank said: “It’s crazy. I don’t know how you rank the 50 biggest clubs in England. Is it history or the clubs’ current budgets? No matter which criteria you use, I’m certain we wouldn’t be there.”

I suggest to him Brentford are probably ranked a third or fourth tier club.

“But every Brentford fan is proud and hopefully we can recreate more magical moments but being in this position where we’re facing Everton and Leeds, who are fighting for their lives, is impressive.”

Apart from taking just one point in eight games in January and February, the Bees have never been in danger — although Frank admitted his wife Nanna had to get used to him being grumpy more often this season because of the extra defeats. 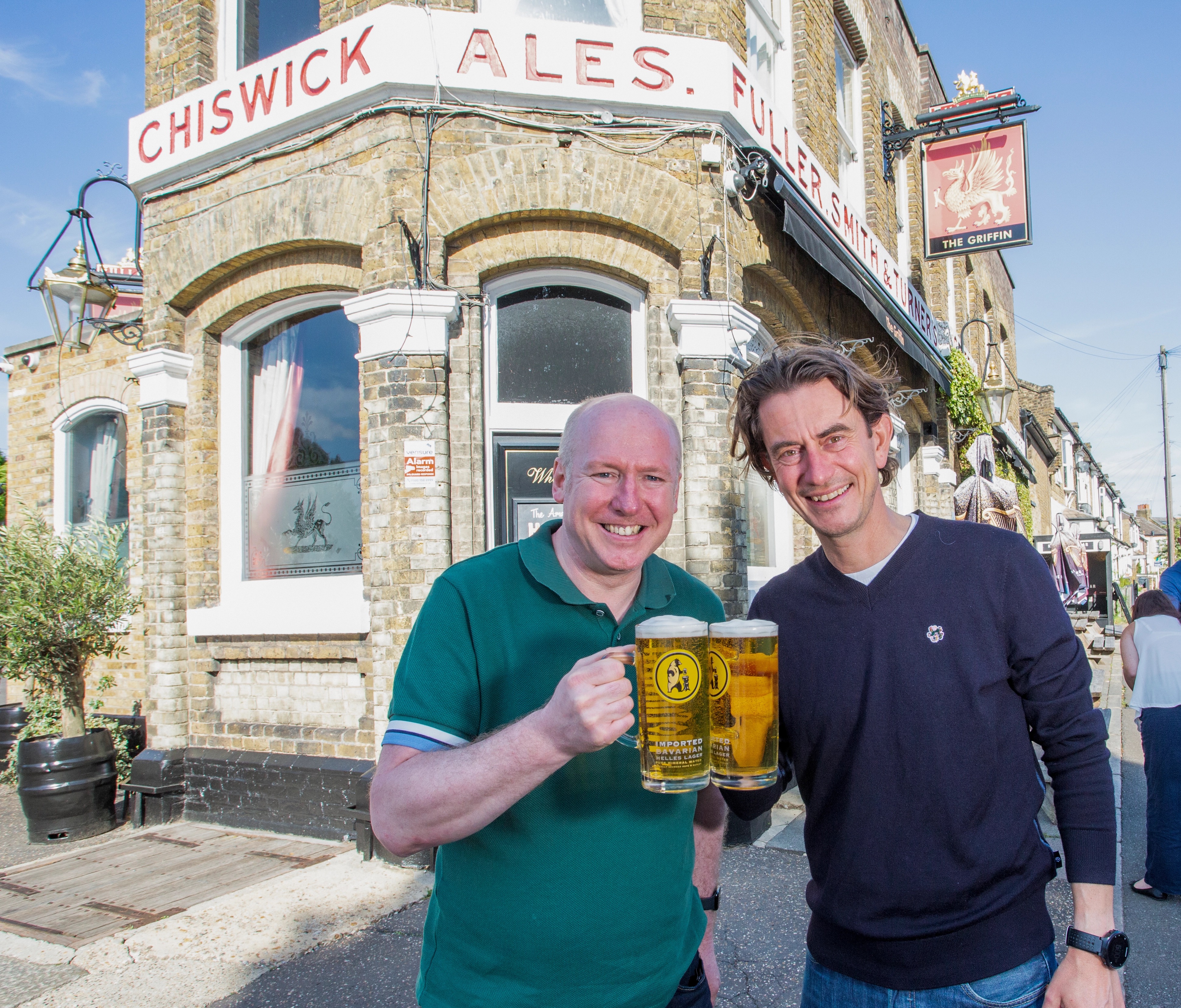 Thomas Frank and Justin Allen have one for the road at The GriffinCredit: DAVE PINEGAR 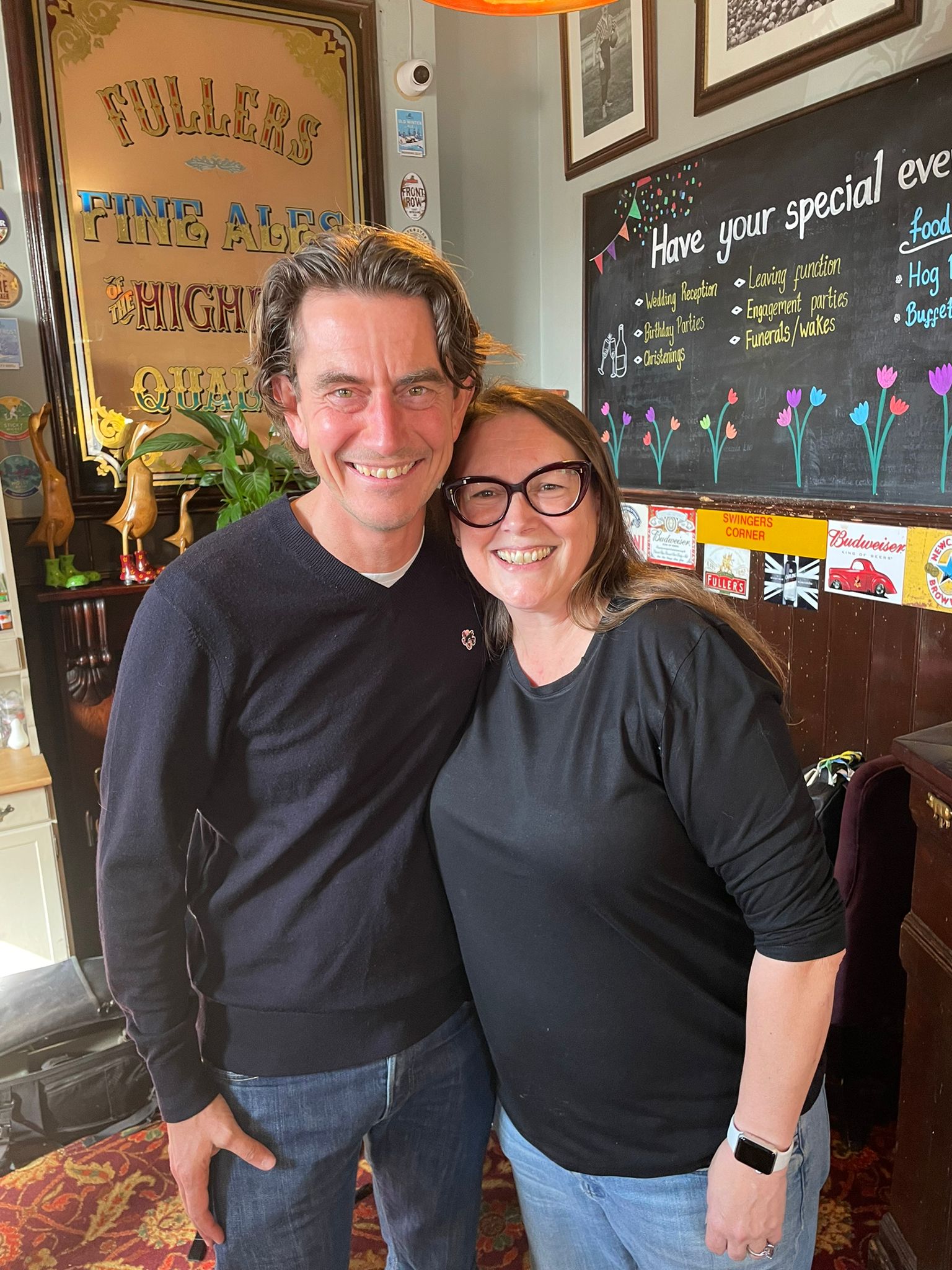 He said: “From day one, we’ve aimed high. I’ve liked our positive approach and we had  huge belief we could be a big asset to this division. We’ve gone into every game with the ambition to win.

“Beating Arsenal in our first-ever Premier League game in front of a full house at home was special and gave us confidence.

“But if you look at our performances throughout the season, they’ve been consistently high.

“We had a bad spell after Christmas when we had injuries but even then our performances were good.

“It was a brutal fixture list at that time as we were playing the likes of Liverpool, Manchester United, Manchester City and Arsenal. But once we beat Norwich, we didn’t look back.”

Indeed – six wins and a draw from their last nine games takes them into today’s clash at Goodison. 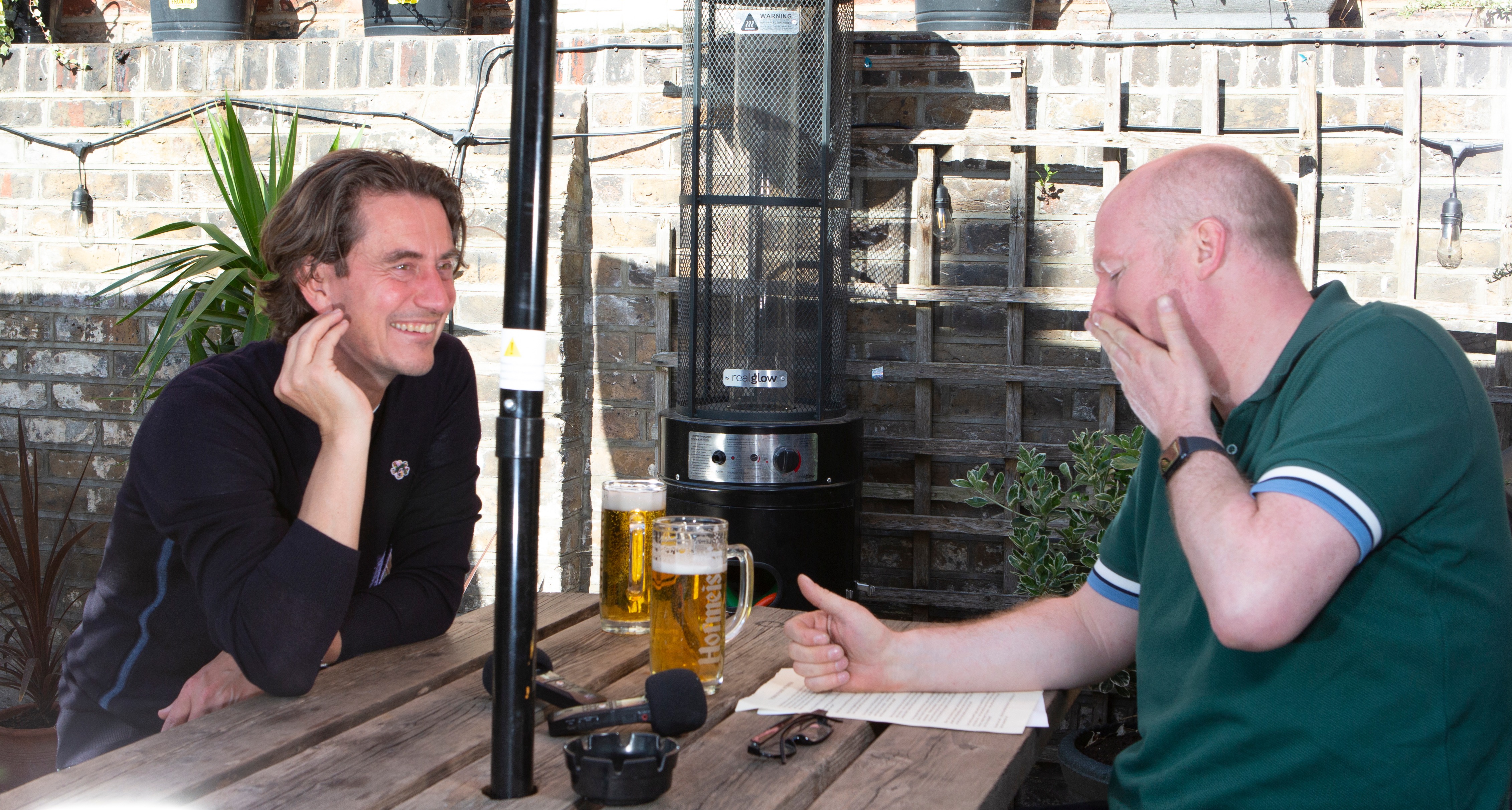 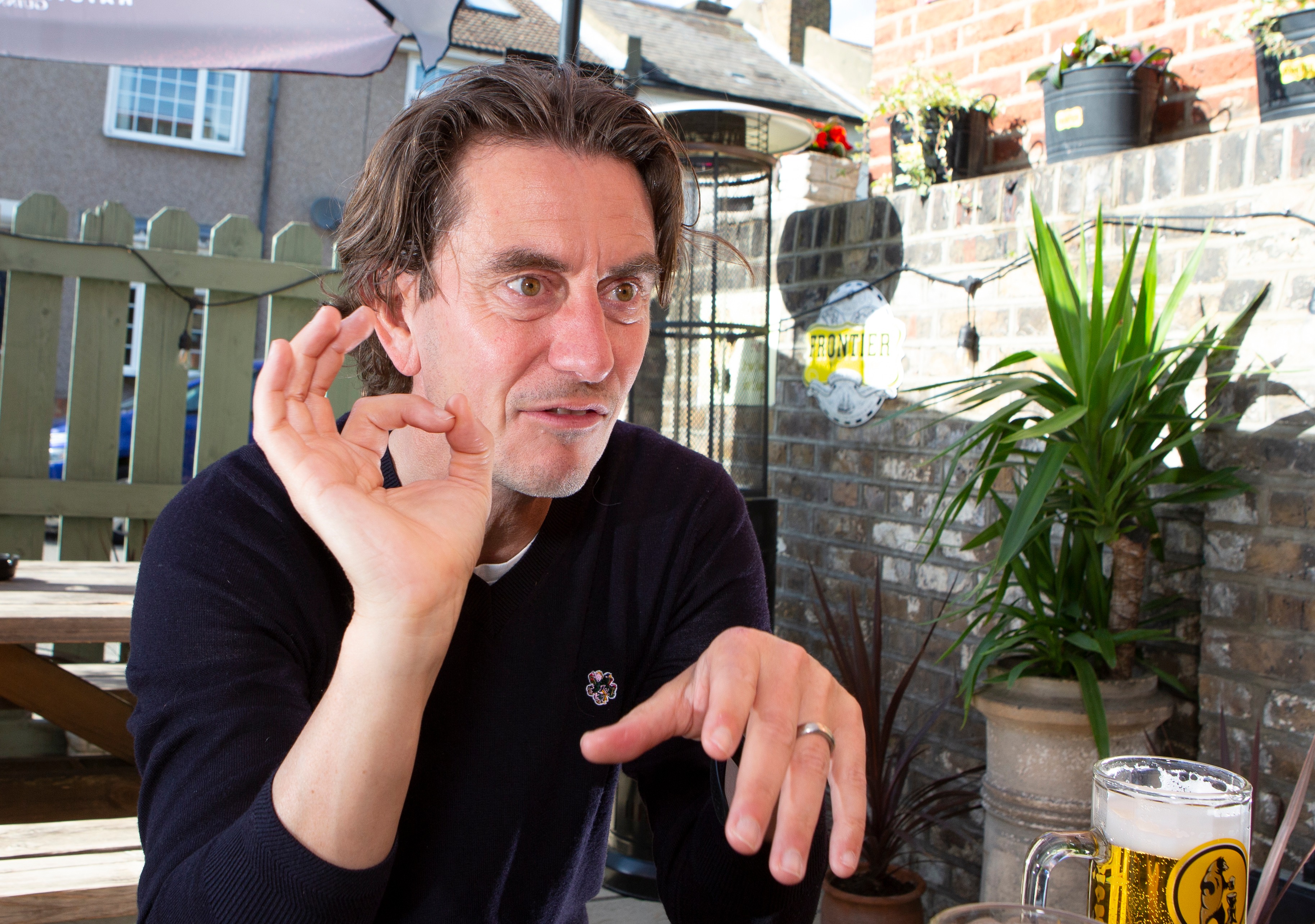 And it is no coincidence their upturn began with Christian Eriksen’s emotional return to football with the Bees seven months after suffering a cardiac arrest while playing for Denmark at Euro 2020.

Frank said: “Christian’s story has been remarkable. From the first game he started, against Norwich, he has been brilliant.

“He’s playing with an extra edge and freedom. He’s enjoying his football but has that desire to do the best he can.

“I almost feel as though Brentford are now everyone’s second favourite team because Christian plays for us.”

A Bees fan approached Frank at the pub and pleaded: “Whatever you do, make sure that Danish fella in midfield signs next season.”

Will he, I ask? Frank said: “I honestly don’t know but I’m positive and believe he might.

“Maybe that’s because I want him to stay so badly but he’s seriously considering Brentford among his options and to even be in that equation is great.  Many people don’t understand how much of a compliment that is to this club.”

While Eriksen is an established world-class player with vast top-flight experience, not a single member of the Brentford team had started a Premier League match before this season.

And two of them — Ethan Pinnock and Shandon Baptiste — even graduated through non-league. Centre-half Pinnock was at Dulwich Hamlet while Baptiste played for Hampton & Richmond.

Frank said: “When Ethan signed his first pro contract at Forest Green, who were then in the National League, he had just graduated with a PE university degree.

“So he could’ve ended up as a PE teacher but instead is now a Premier League footballer. 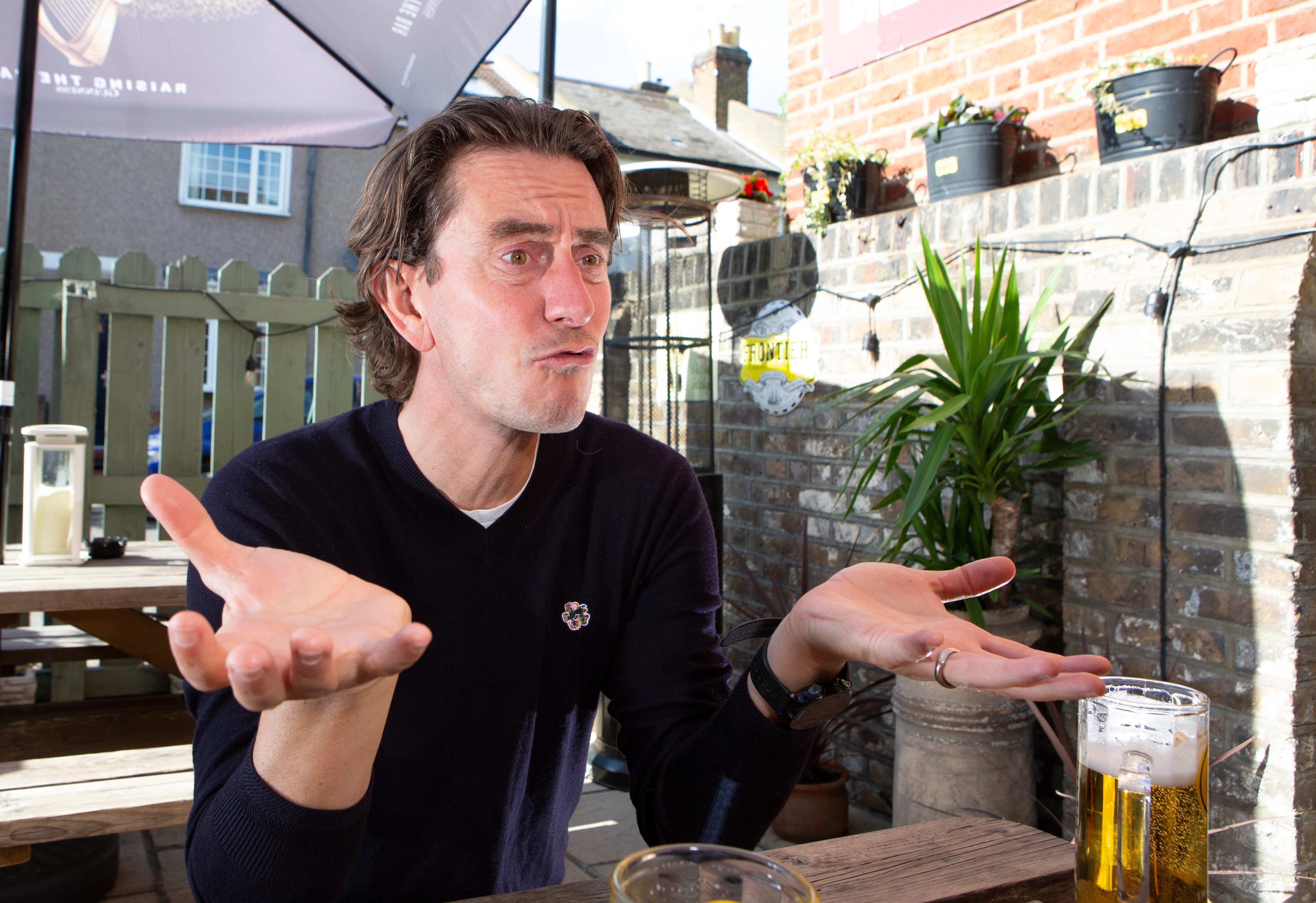 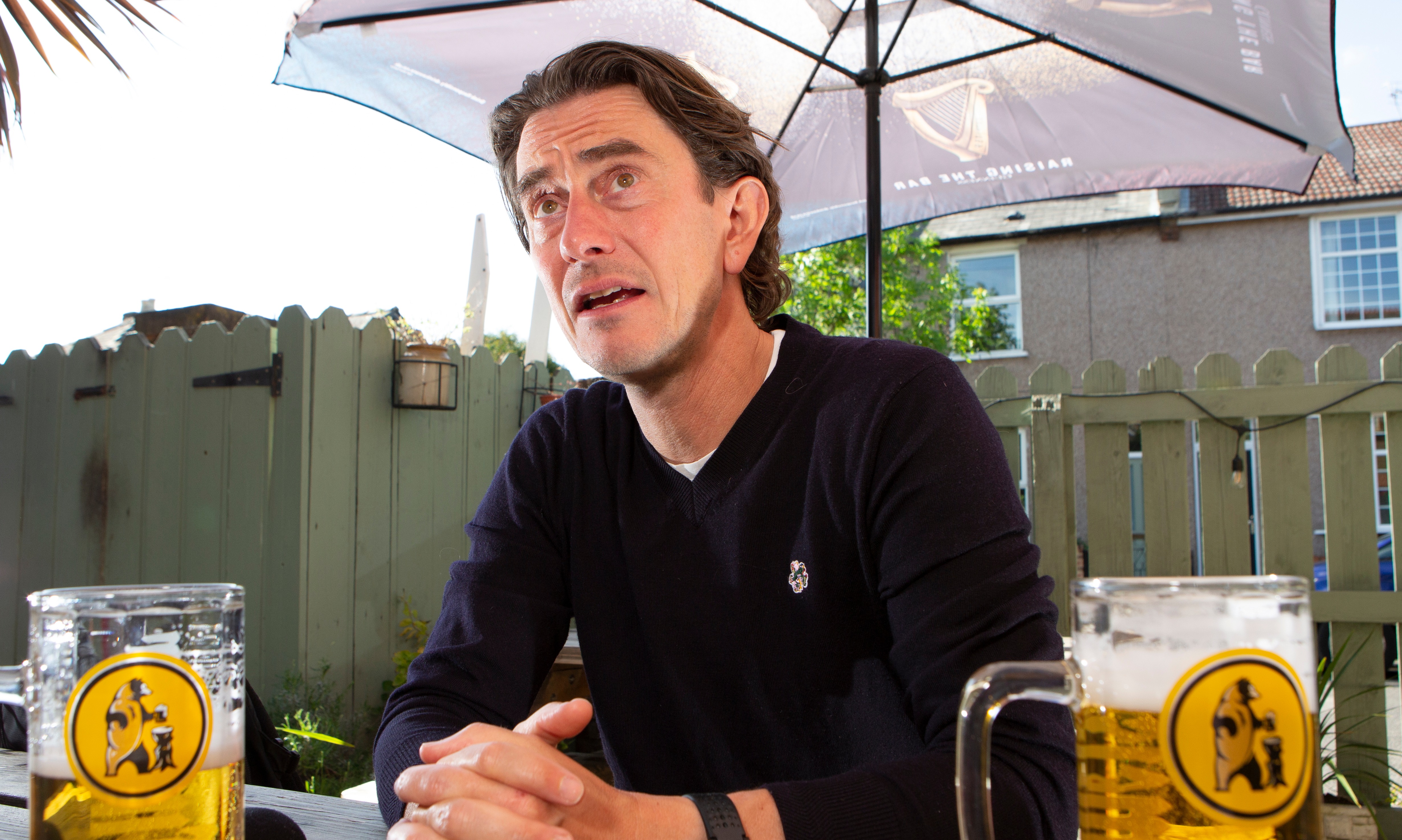 “Shandon, meanwhile, was injured last year but came back pre-season very strong and we thought, ‘Wow, we’ve got a player here.’ However, he got injured before the season started.

“Yet I saw enough to want to play him but then he had another setback. But he has come back again and should be proud how many Premier League minutes he’s played.”

Star striker Ivan Toney tore up the Championship with 33 goals last season and has managed to net 12 in the top flight with five assists.

And Frank said: “Firstly, Ivan is the world’s best penalty taker. He’s also a constant threat. His link-up play is outstanding. He sees the game so well and has good technical ability. He’s constantly improving his pressing. There’s more to come from him.”

Brentford famously had the BMW frontline of Benrahma, Mbeuno and Watkins. Only Bryan Mbeumo remains but he has had a fine season— having already made the same number of assists as Kevin De Bruyne with seven.

The Bees boss said: “He’s been unlucky because he holds the record of hitting the post more than anyone!”

While we enjoying the spring sunshine, Frank is clearly loving the Hofmeister and says: “I never knew about this lager — I think this seriously might become my go-to beer.”

It makes me think about the tradition for opposing managers to share a drink — quite often wine — after a match in the home boss’s office.

I ask Frank who he has enjoyed meeting the most in the Premier League. 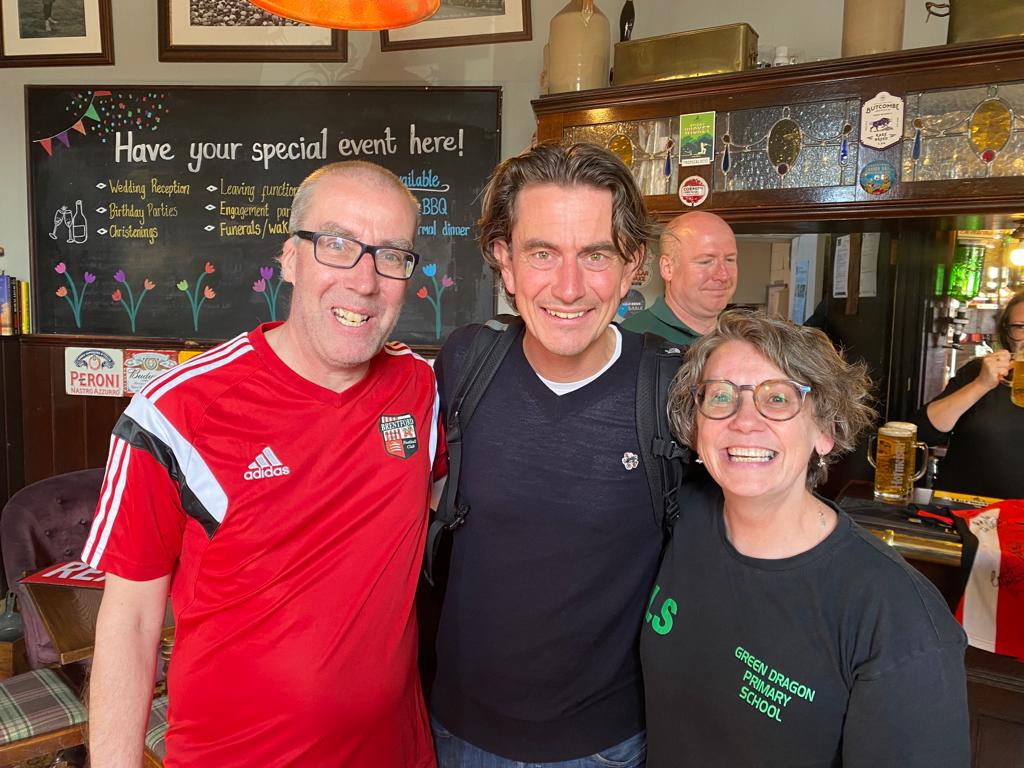 Thomas Frank mingled with fans like Eamon and Liz Sylvesters 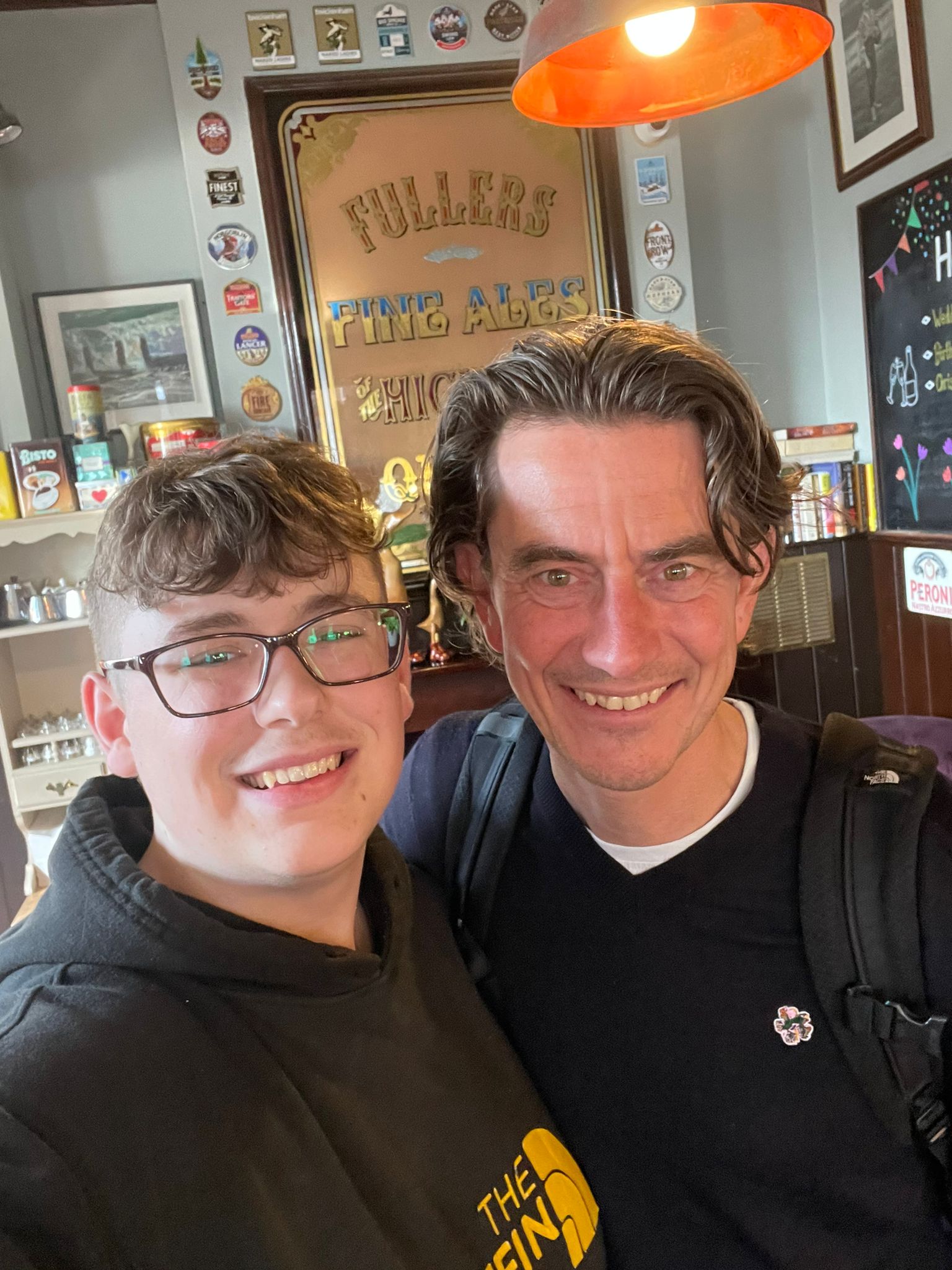 He said: “I don’t know how it was before but I think post-Covid that tradition hasn’t been so common.

“I would’ve loved to have shared a glass of wine with Sir Alex Ferguson because I knew he always invited people in.

“But it’s not the same any more because there are more foreign coaches now who don’t do that type of thing. I like that old tradition so I do invite people in.

“I’ve managed though to enjoy meeting David Moyes, my very good friend Dean Smith and Brendan Rodgers. It’s been a privilege to meet all of them.”

So what is the ambition now for next season? Having seen what Eriksen has added, there must be a desire to find other world-class gems?

He said: “Our first aim is to keep everyone and hopefully we can continue to get our recruitment right.

“It’s not a case of finding a gem no-one else knew about. Everyone will know a bit — but quite often we’ve been the first club in which helps.

“I don’t believe in ‘second-season syndrome’ for newly-promoted teams. Yes, it’s a miracle we’re in the Premier League but we deserved to stay up and why not perform well again and again?”

And his big dream is for this winter’s World Cup final to feature TWO Brentford players.

He said: “I want to see our keeper David Raya against Christian so a Spain v Denmark final with both of them still being Brentford players!”

Maybe the beer had finally got to Frank’s head there but after what the Bees have achieved anything is possible.

THOMAS FRANK could get the last laugh on Leeds after they goaded him in a video when they won promotion two years ago — ahead of Brentford.

Smug Liam Cooper and Scott Dallas were filmed singing “Mind The Gap, Thomas Frank” to boast about their 12-point margin over the Bees.

The video was posted on Leeds’ social media platforms before later being deleted.

But next Sunday, Brentford could send Leeds crashing back down to the Championship.

Punters in The Griffin pub pleaded with him to go easy on Everton today and then sign off their season by beating the Yorkshire club to hopefully send them into the second tier.

Frank laughed: “I want to beat BOTH of them” before diplomatically telling me: “I’m not on social media but I do remember someone showing me two years ago.

“Leeds are a massive club and I’ve always found them interesting as one of the giant English teams. I was very pleased when they got promoted because a club of their size and history should be in the Premier League.

“My focus is on ourselves to improve Brentford and I have no preference out of Burnley, Leeds and Everton who should get relegated.

“I also would like Everton to stay up simply because they’re a founder member of the Football League and have a big history. But you need competition and you must earn the right to be in the Premier League.”

WE selected a few questions that Bees fans wanted to be put to Thomas Frank.

Which player has surprised you most in the way he has adapted to the Premier League?

David Raya. I think he was good but he has shown he’s a top keeper in the Premier League — and deserved his Spain call-up.

Do you cycle to work like a lot of Danes?

In Denmark I used to cycle with my children to school every single day. That was my thing. I loved it.

London is a little bit too dangerous to cycle around. I’d love to do more mountain biking but am more of a runner.

What surprised or shocked you most in the Premier League?

When you are there pitchside, the tempo and pace of the transitiion is very impressive and the quality of the players. The media demands are also huge.