Tension was already high in the Championship play-off semi-final when Heckingbottom took the ball and tried to aggressively pass it to the Arsenal-linked Nottingham Forest defender.

The brawl came after Heckingbottom took issue with the length of time Forest were taking on throw insCredit: Alamy

Brennan Johnson, who scored Forest’s opening goal, took offence to the over-zealous actions of The Blades manager and ran over to confront him.

However, as a Sheffield United player pushed him back it then started a huge clash between the two sides players and benches.

Perhaps surprisingly, the only booking brandished for the whole incident was to Heckingbottom.

The score is currently 3-3 on aggregate between the two sides, with Morgan Gibbs-White levelling the scoring at the City Ground before John Fleck put the visitors ahead to drag the game into extra-time. 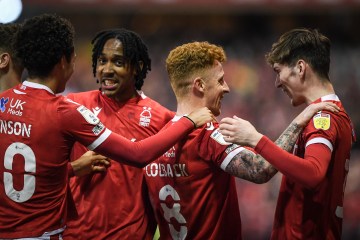 The first leg ended in a 2-1 win for Forest with Sander Berge’s 91st minute consolation halving the deficit created by Jack Colback and Johnson scoring either side of half-time.

The next goal could be pivotal in determining who can make it to Wembley for the play-off final.

Forest want to make their Premier League return after a 23 year absence, with their last season coming in 1999.

Meanwhile, Sheffield United are looking to bounce back from relegation immediately and copy Fulham in making an instant return.

From the other semi-final Huddersfield have already secured their spot in the final on 29 May.

The Terriers beat Luton Town to progress and will hope to make a return to the Premier League to reignite their love affair with England’s top division.

They spent two years in the Premier League between 2017 and 2019 when they were relegated in last place having amassed a measly 19 points.