MANCHESTER CITY manager Pep Guardiola hilariously jumped in front of the camera to wish BT Sport’s viewers a ‘Happy New Year’ ahead of the Arsenal game.

The defending Premier League champions travel to north London looking to extend their lead at the top of the table to 11 points.

Guardiola was giving his assessment ahead of the Arsenal gameCredit: BT SPORT 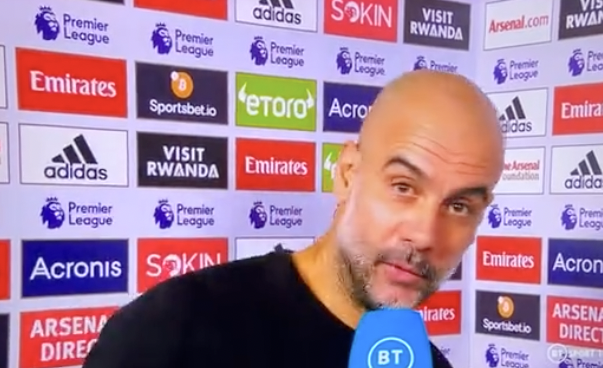 The Spaniard popped back into shot to wish the viewers a ‘Happy New Year’Credit: BT SPORT

But standing in their way are an in-form Arsenal team who haven’t lost in their last five outings and find themselves inside the top four.

Ahead of the highly anticipated fixture Guardiola was giving his assessment, and promptly walked off afterwards.

Guardiola then flew back in front of the camera and wished the viewers a ‘Happy New Year’.

One fan said on Twitter: “Very relaxed knowing he’s got a banter team to go out and batter.”

Another said: “This will be one of the greatest memes in the football world.”

A Norwich fan branded Guardiola’s well wishes as the ‘first meme of the year’.

Unfortunately for the Spaniard, his old understudy Mikel Arteta won’t be on the touchline due to Covid.

Arteta confirmed: “Albert will be in charge. With the rest of the team, it will depend on who is unavailable because there have been so many [Covid] issues in that department recently.

“Hopefully, everybody will be there to help as much as possible.

“We will be in touch but as well I want to give them the possibility, the responsibility and the freedom to make decisions on the pitch and to express themselves.

“It’s completely different being on that touchline with the players and the action than being at home.

“I’m going to be here to support and help in certain moments but they have to get the momentum of the game and communicate with the players themselves.”