Jean-Philippe Mateta had scored a sublime strike himself on the half hour, flicking home a backheel for his first Palace goal. 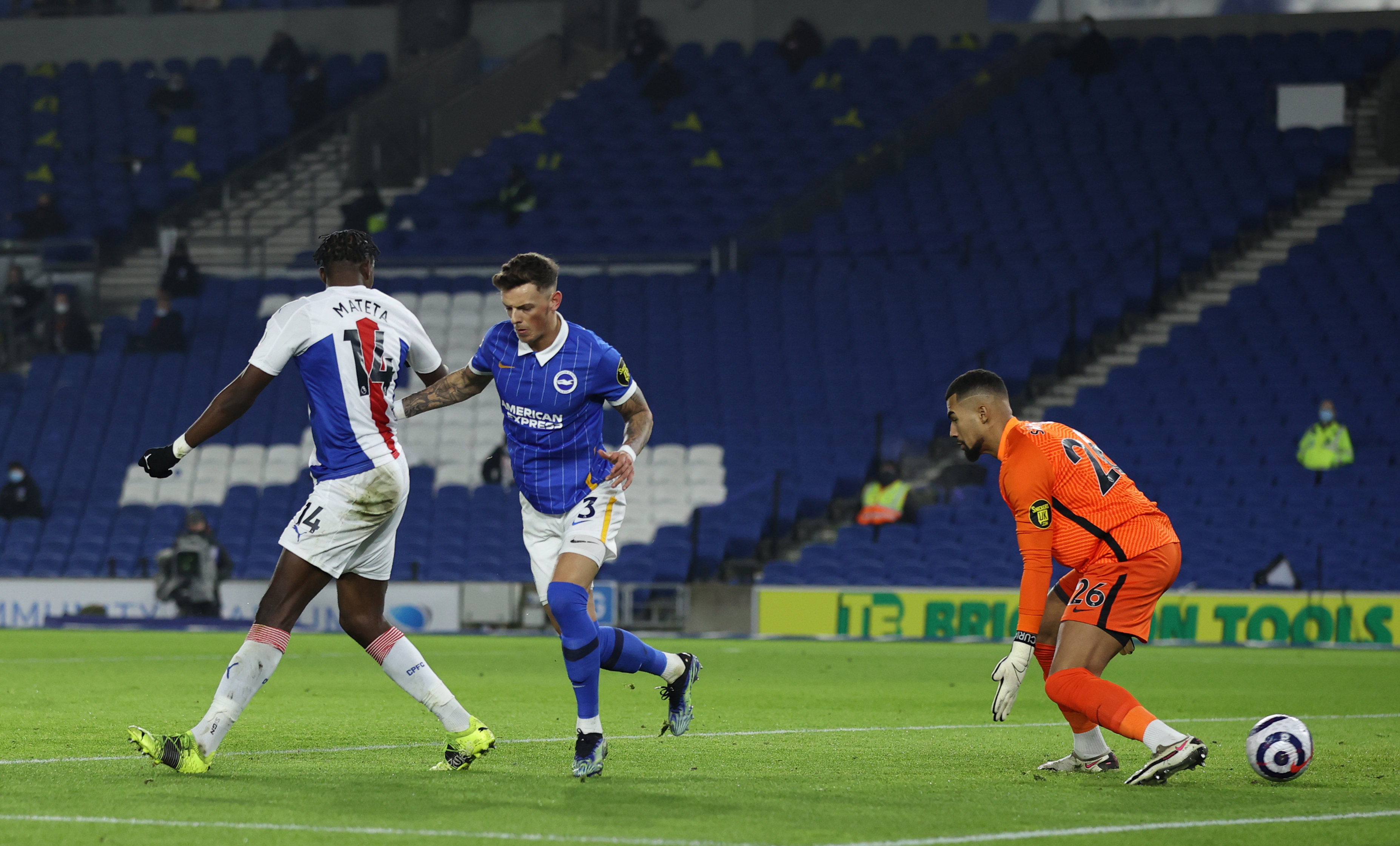 But when Joel Veltman crashed a leveller in the second half, this clash between rivals up and down the A23 looked set for a stalemate.

Sub Benteke had other ideas though, blasting a volley brilliantly into the far corner from an acute angle to win Palace their first-ever Premier League game on Monday under Roy Hodgson.

It moved the Eagles to 32 points and on course for safety.

But it left Graham Potter’s Albion just four points above the drop zone and with serious worries of being caught by resurgent Fulham.

Hodgson’s slack side had fallen behind by that time in each of their last three league fixtures, including the demoralising 3-0 home humbling to Burnley last time out.

No one was expecting fireworks from this derby, that is not really a derby given the 43 miles up the A23 between the two. 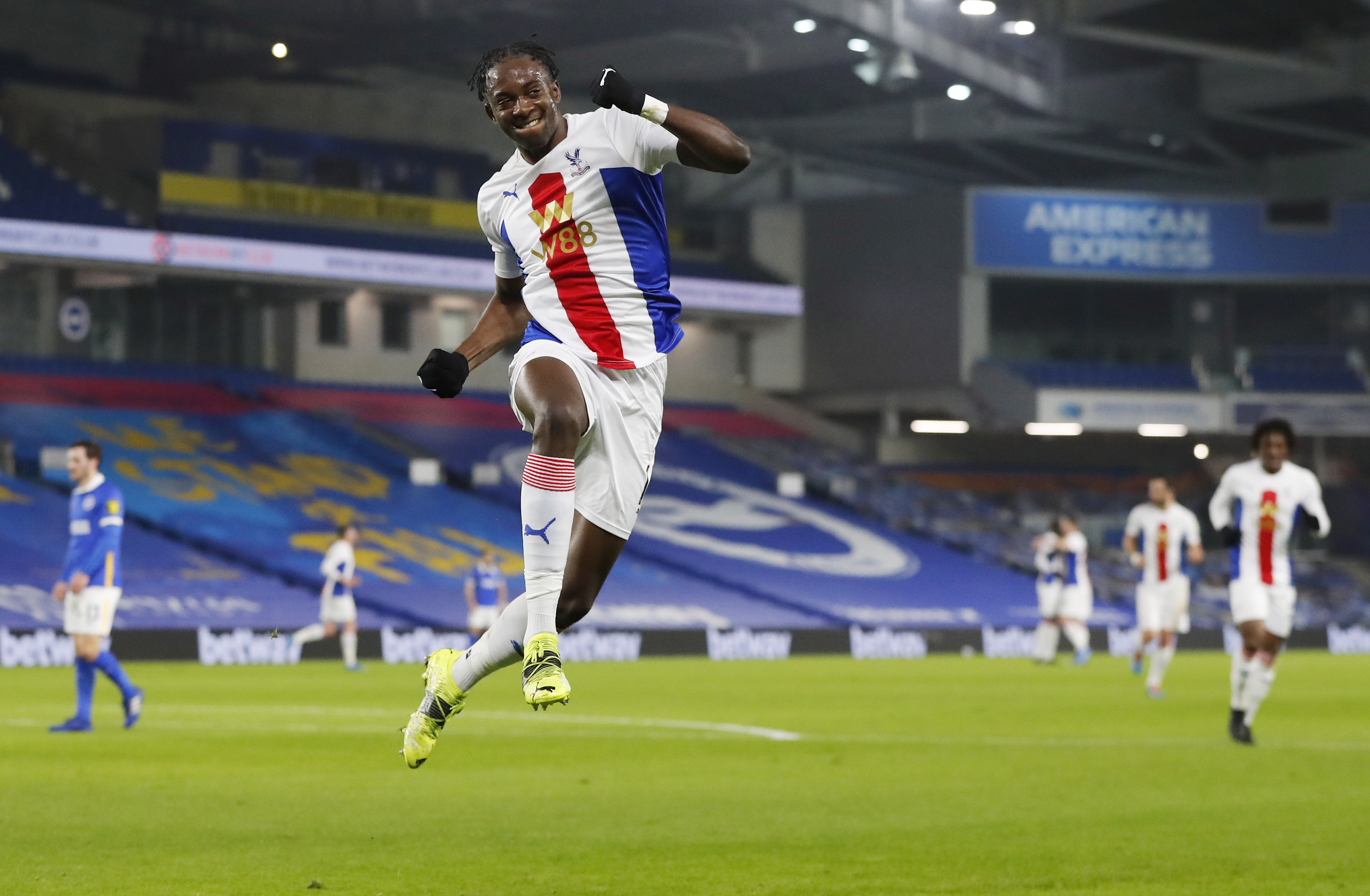 Jean-Philippe Mateta celebrates his goal, his first for PalaceCredit: EPA

That was the case for the best part of half an hour as neither side mustered a chance of any note.

But on 28 minutes, El Gatwicko finally took flight thanks to Mateta’s brilliance.

Cheikhou Kouyate played a long ball down the flank, allowing Jordan Ayew to race towards the byline, holding odd Dan Burn and then firing in a low cross.

Mateta reached the delivery ahead of Ben White and then showed a ballerina’s grace to backheel the ball on the turn through a surprised Robert Sanchez’s legs.

It was a breathtaking way for the Frenchman to net his first Premier League goal on what was only his second Palace start since signing on an 18-month loan from Mainz.

It came as a shock to Brighton, who had looked comfortable up to that point.

But their reaction for the rest of the half was poor, with Joel Veltman’s blast wide from outside the area the sum total of their response ahead of the interval.

Given the small gap to Fulham, Potter knew he had to do something.

So it came as little surprise when he sacrificed Steven Alzate for Danny Welbeck at the break.

The former England star had a good chance straight away as Veltman fizzed a low ball towards him, but Welbeck could not steer it on target from eight yards.

Welbeck did play his part in the leveller on 54 minutes, though.

Brighton worked the ball back to Pascal Gross, whose scuffed shot went into the ex-Manchester United man, who was tackled by Tyrick Mitchell. 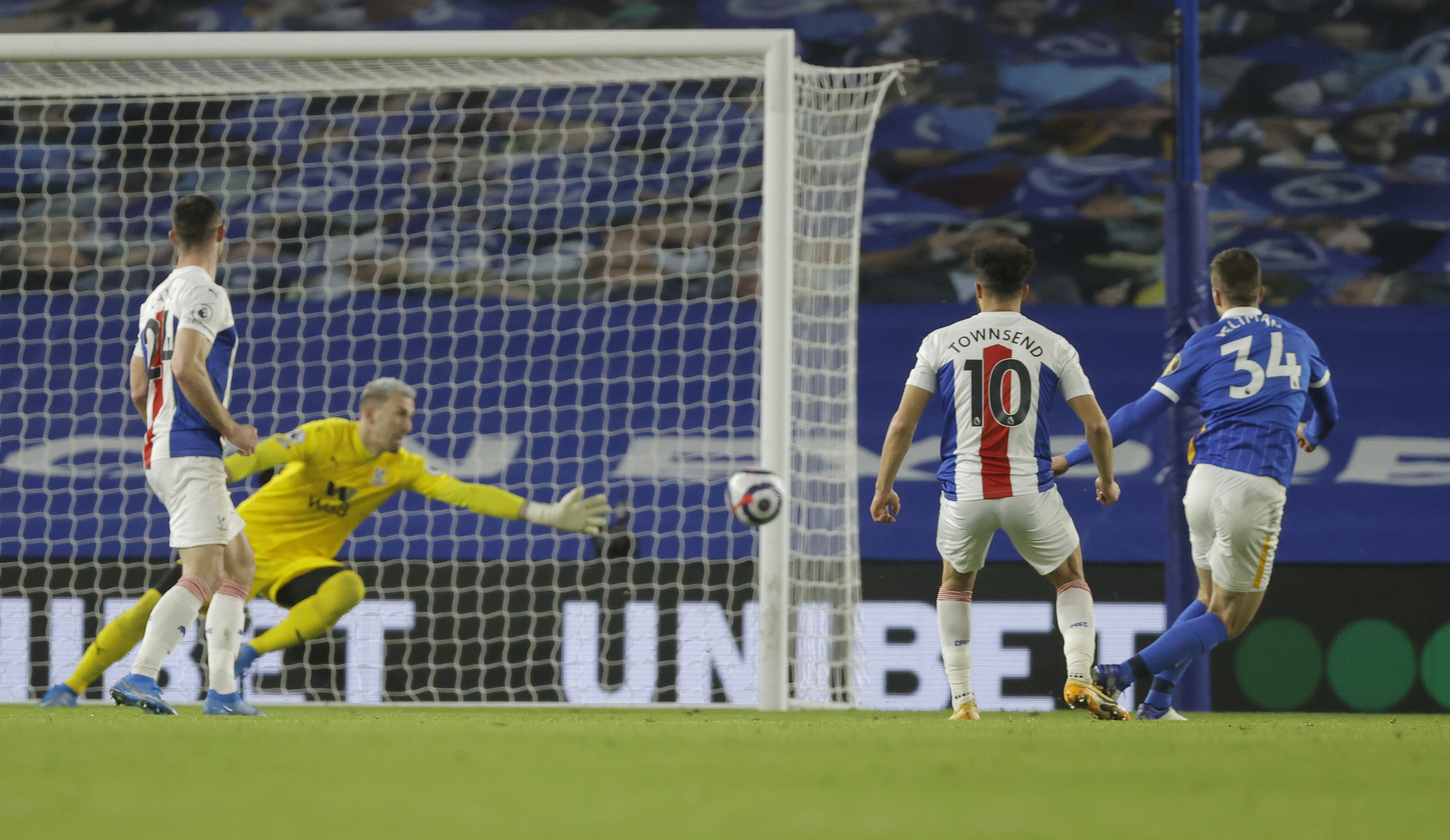 But the ball fell loose and there was Joel Veltman to hammer in off the post with his left foot.

It continued the Dutchman’s fine first season in English football.

His £820,000 arrival in the summer did not come with a lot of fanfare, particularly as he was expected to be back-up to whizkids Tariq Lamptey and Ben White.

Yet with Lamptey out injured since December, Veltman has deputised brilliantly, showing defensive nous and quality going forward to rightfully earn the status of ‘bargain buy’.

Albion pushed for a second but Welbeck and then Alexis Mac Allister were denied by heroic blocks from Kouyate and Ebere Eze respectively.

The hosts then wasted hat-trick of half-chances as Welbeck and Lallana, twice, leant back and boomed the ball over the bar.

Monday is certainly not fun day where these two are concerned. 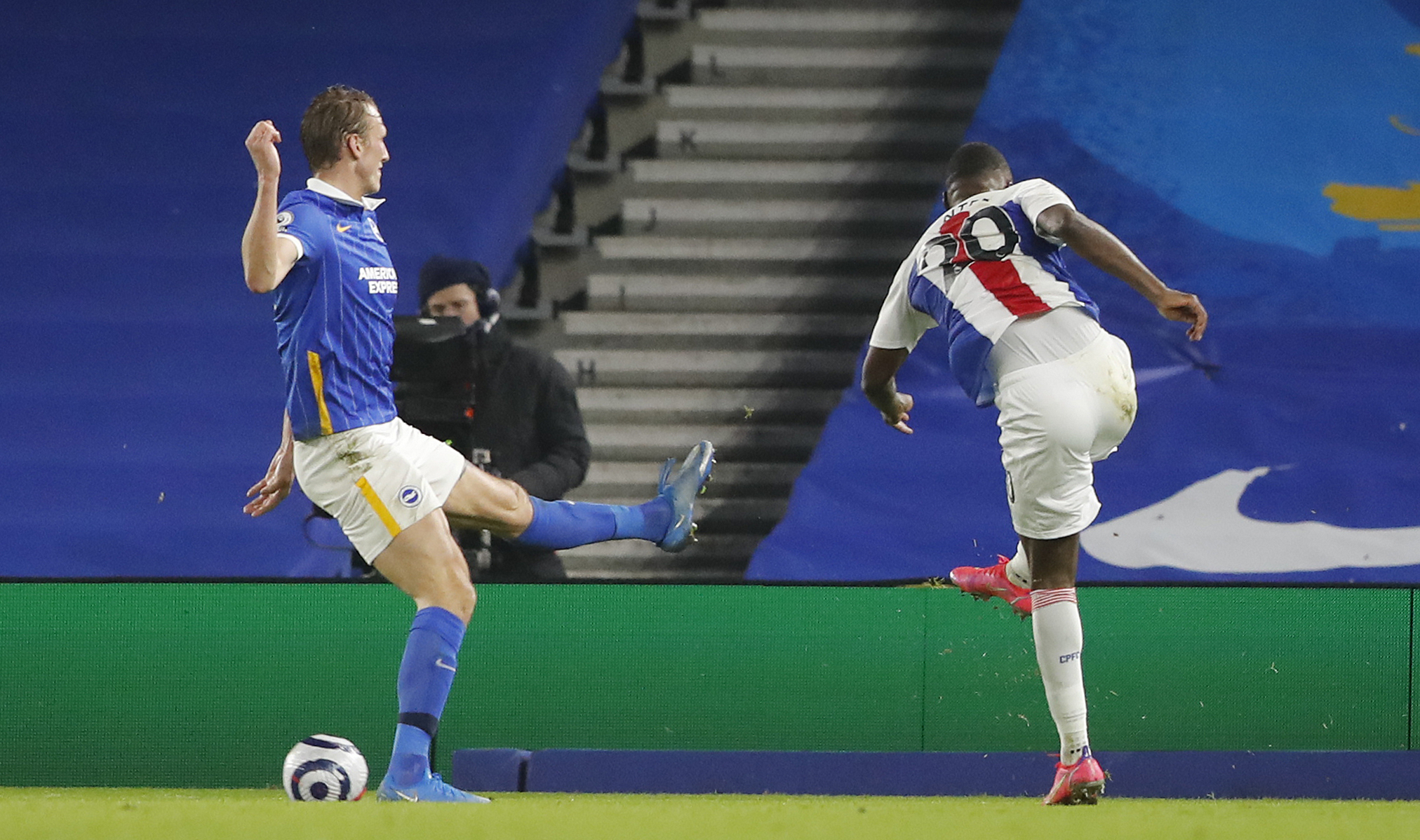 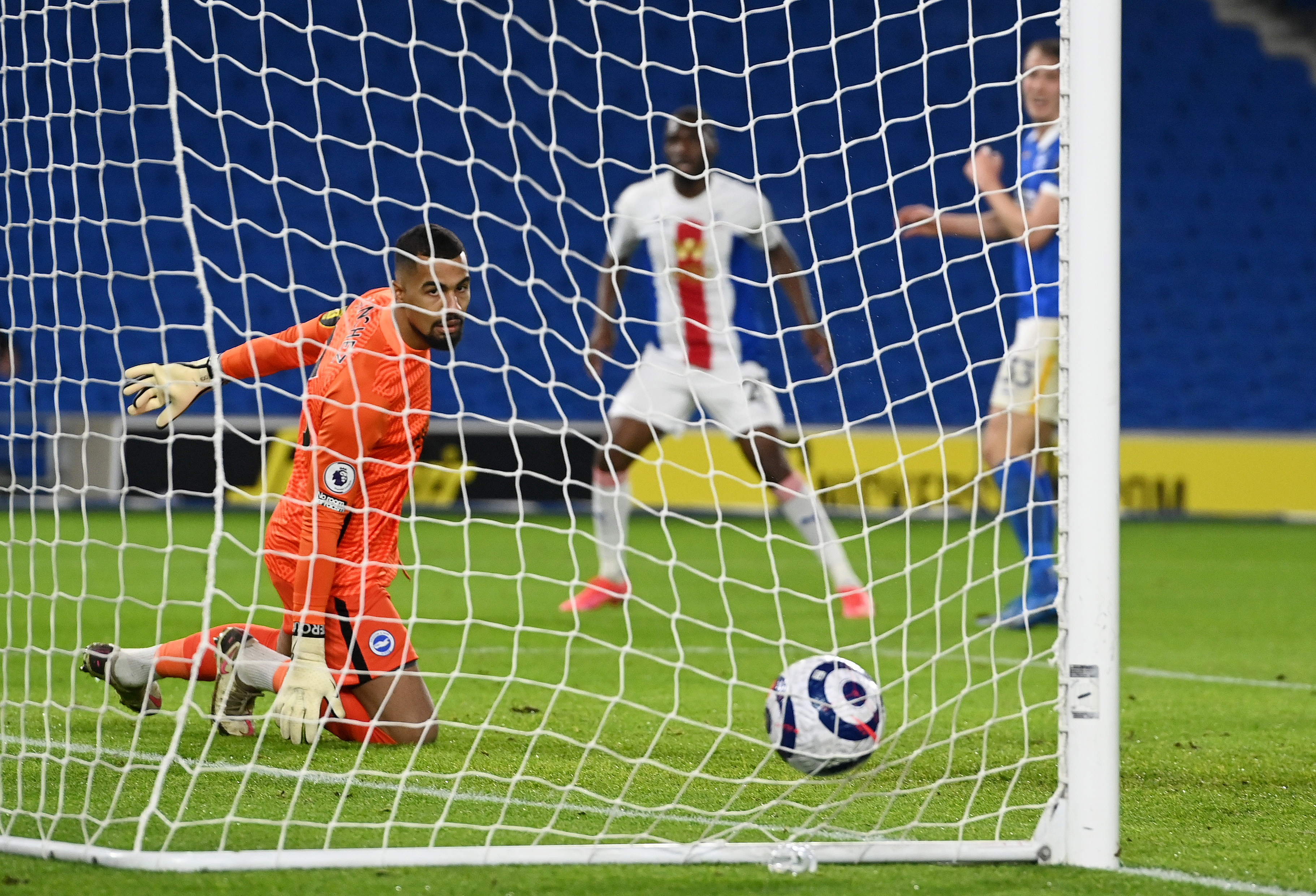 Christian Benteke won the game right at the deathCredit: Reuters