ADEMOLA LOOKMAN was on the receiving end of a strange booking after performing his trademark glasses celebration.

The Nigerian international, 24, moved to Atalanta in Italy in the summer from RB Leipzig.

The look on his face says it all… 🤷‍♂️ pic.twitter.com/RdM2LXf4V8

Ex-Leicester and Everton star Lookman seems to be enjoying life in Serie A and has scored three and produced the same amount of assists so far.

But he was left perplexed on Sunday after being bizarrely yellow carded after his latest goal.

The winger opened the scoring during Atalanta’s away trip to Udinese.

He then celebrated in his own unique style by cupping his fingers over his eyes. 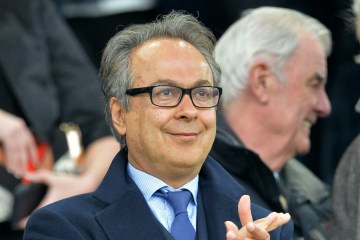 However, just seconds later he was visibly shocked as referee Daniele Doveri waved a yellow card at him.

The official then gestured that the booking was for Lookman’s celebration – something that left the former Fulham loanee completely perplexed.

He tried to protest before his Atalanta team-mates dragged him away as his manager Gian Piero Gasperini looked on in frustration.

Despite that strange scenario, Lookman’s side doubled their lead through Luis Muriel shortly after half time.

Lookman was then taken off by Gasperini in the 65th minute as his team appeared to be cruising towards the three points.

But there was more disappointment in store as the hosts started a fightback.

Udinese then levelled with 12 minutes to go courtesy of defender Nehuen Perez’s header.