Trapp was among the heroes that led Frankfurt to victory in the final against Rangers on Wednesday at the Ramon Sanchez Pizjuan Stadium in Seville. 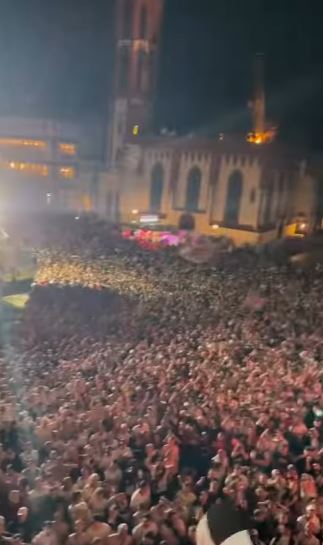 The Bundesliga outfit beat the Gers 5-4 on penalties when the German goalkeeper saved Aaron Ramsey’s spot-kick and set up Rafael Borre to beat Allan McGregor.

Celebrations then erupted in Spain following a dramatic encounter that went to the wire after a 1-1 draw that saw Borre cancelling out Joe Aribo’s opener prior to penalties.

The festivities continued in Germany as thousands of fans flooded the streets of Frankfurt to greet their heroes with loud chants.

The reception moved an emotional Trapp to tears as he watched along with his team-mates from a balcony with the trophy in their hands.

This is an exciting period for the 31-year-old, who joined Eintracht on loan after falling out of favour at Paris Saint-Germain in 2018 before signing a permanent deal a year later.

After winning the Europa League with his team the Germany international is expected to marry model fiancee Izabel Goulart.

Eintracht’s title celebrations proved to be very emotional for both the team and fans.

So much so that players gatecrashed manager Oliver Glasner’s post-match press conference.

Glasner was analysing his team’s triumph when a number of his players suddenly showed up and poured booze all over him in front of the media.

Reporters started to record the hilarious moment on their phones while the Eintracht players and manager laughed and sang ‘Campeones’.