The youngster has been a revelation at Nottingham Forest this season with a string of impressive performances helping them reach the Championship play-off final.

Spence, on loan at the City Ground from Middlesbrough, has caught the eye of a number of Premier League clubs.

Arsenal are among them, after his standout display knocked Mikel Arteta’s side out of the FA Cup.

But, just as Spurs pipped their North London rivals into the top four, they are also set to steal Spence from under their noses too.

Antonio Conte views him as a potential right wing-back upgrade as the Italian looks to invest heavily in his squad this summer. 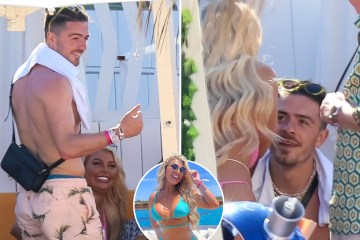 It is believed Conte is happy to let Emerson Royal leave and has made £15million Spence his prime target.

Spence’s ambition is to play at the highest level and Boro will sell to the highest bidder – Bayern Munich are said to have scouted the defender too.

Brentford are another club in the race to sign Spence and believe he would fit their playing style perfectly.

The Bees are also interested in another Forest star, Brennan Johnson, who has scored 18 league goals this season.

And like Spence his future may depend on whether Steve Cooper’s side are promoted in Sunday’s play off final against Huddersfield.

Spurs are also keen on Johnson who has been tipped to join a top six side by Wales manager Rob Page amid interest from Arsenal.

Tottenham are closing in on another winger with Inter Milan star Ivan Perisic set to snub Chelsea to join them.

Conte is aiming to revamp his squad this year with centre-back Alessandro Bastoni wanted along with a back-up for Harry Kane.

The Italian is also keen to get rid of deadwood which could see Tanguy Ndombele, Giovani Lo Celso and Harry Winks leave on a permanent basis this summer.