ARSENAL’s Europa League ambitions are hanging in the balance after conceding a disastrous stoppage-time equaliser. 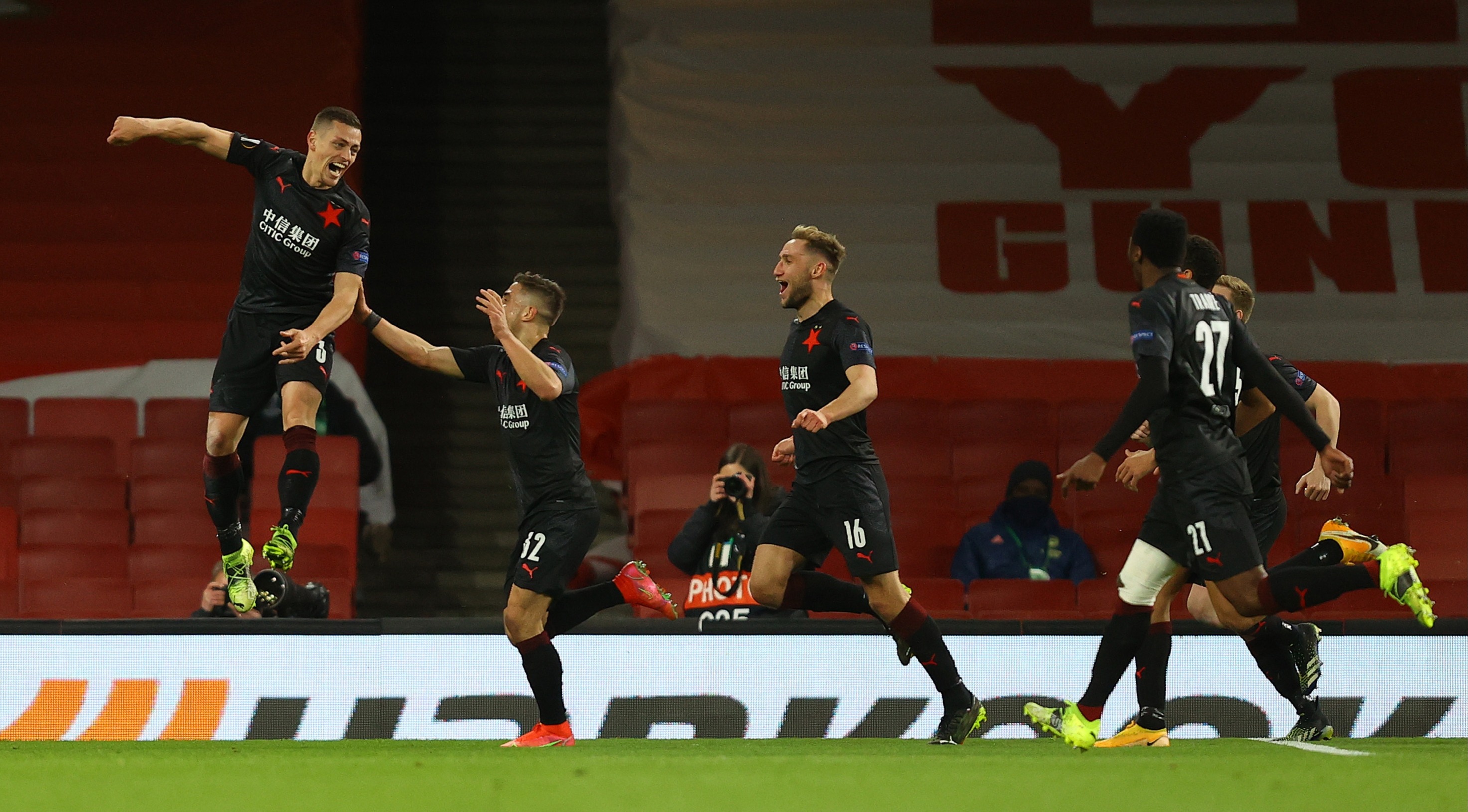 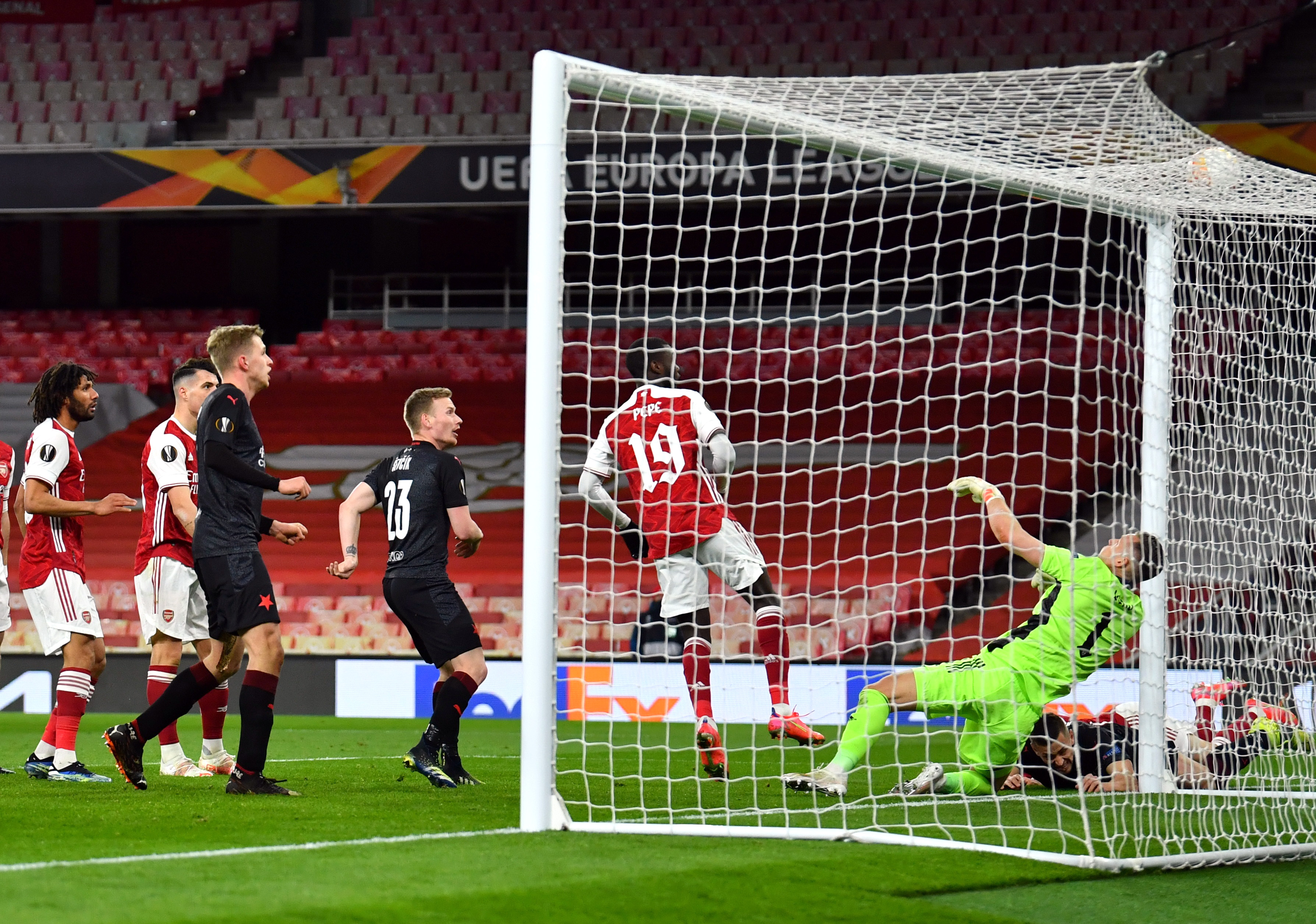 Arsenal were frustrated and face a huge task in next week’s second legCredit: Getty

But Arsenal’s record signing undid all his good work when he failed to clear a last-gasp Slavia corner to allow defender Tomas Holes to head in at the back post.

It was an absolute sickener for Arteta, who had been hoping that the backlash from Saturday’s Liverpool humiliation would be “the big punch in the face” that his team required.

But it wasn’t until he sent on Pepe and skipper Pierre-Emerick Aubameyang as late subs that he got the response he had been looking for.

The £130 million duo could have had few complaints about being benched following their recent half-hearted efforts.

And Aubameyang didn’t help his cause when he missed an absolute sitter within seconds of replacing Alex Lacazette.

But with time running out, Aubameyang pounced on Granit Xhaka’s long boot up the field to set up Pepe for a cool as you like finish into the far corner.

That should have been enough to leave the Gunners with a crucial advantage going into next week’s quarter-final second leg.

But now they have it all to do if they are going to survive in the competition which represents their last realistic chance of qualifying for Europe again next season.

Having already taken care of Leicester and Rangers in the previous rounds, Slavia arrived in North London confident that they didn’t have too much to fear from the tenth best team in England. 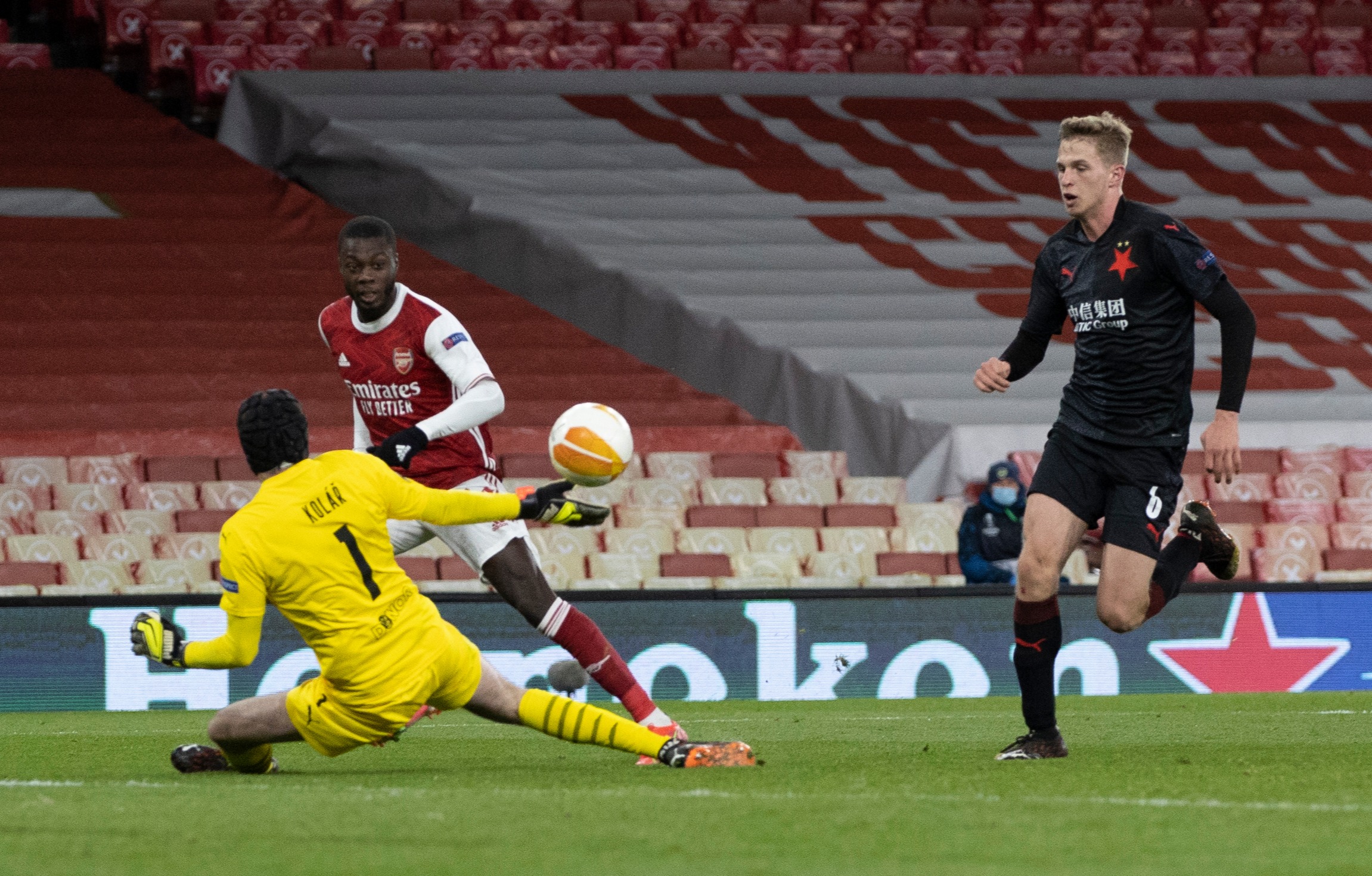 Nicolas Pepe scored what looked to be the winner in the 86th minute before a dramatic injury-time equaliserCredit: The Sun 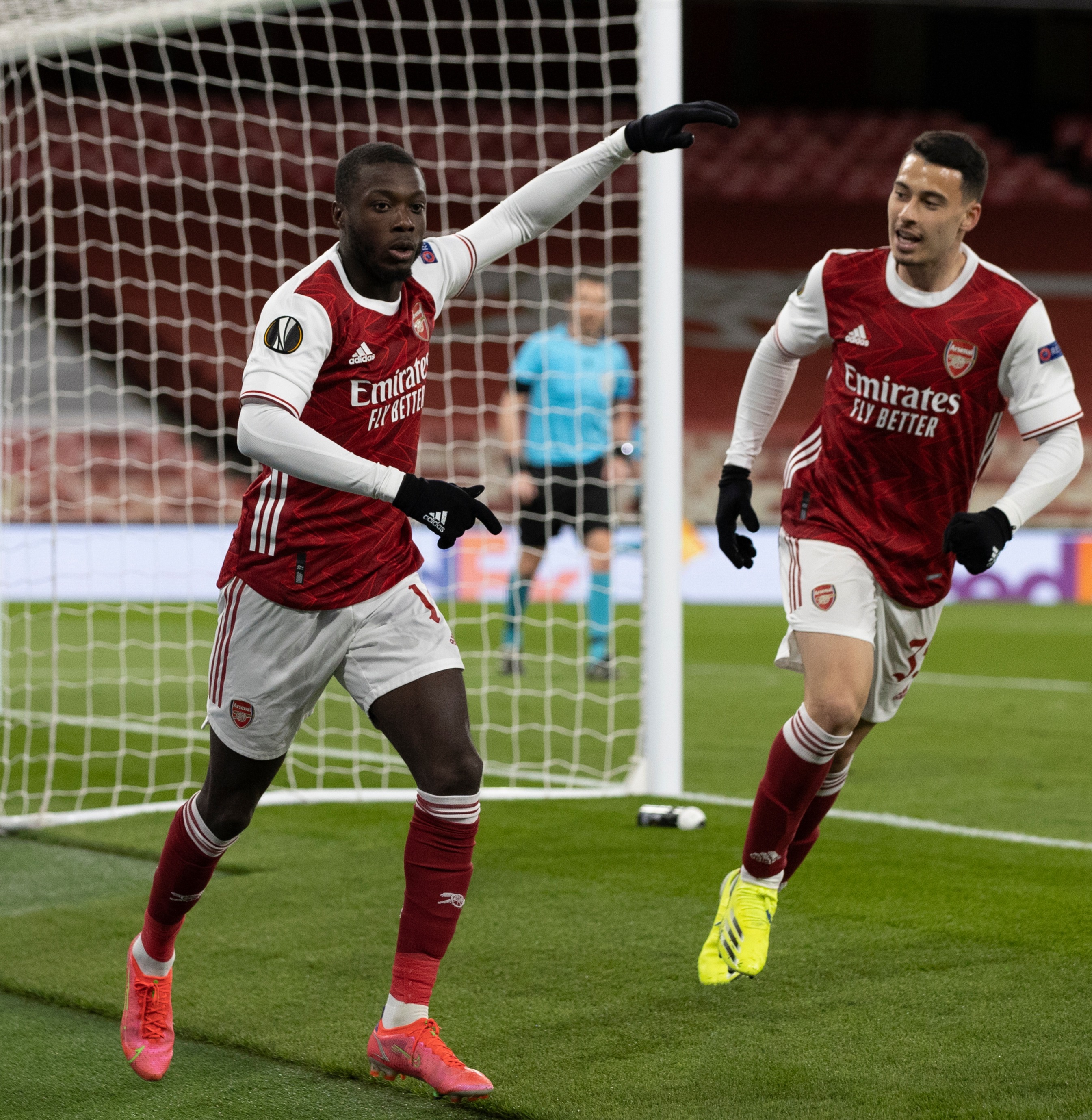 Nicolas Pepe celebrates his 86th-minute strike that looked like being Arsenal’s winnerCredit: The Sun

They are currently 14 points clear at the top of the Czech League and haven’t lost domestically in a 37-game run stretching all the way back to March of last year.

It is all a far cry from their only previous trip to the Emirates, when they hammered 7-0 in a Champions League group game back in October 2007.

Yet it wasn’t all straightforward for the Czech Champions, who were without all four of their recognised central defenders.

Among those absenstees was the veteran Ondrej Kudela, serving a provisional ban while Uefa investigates claims that he racially abused Rangers’ Glen Kamara last month.

Slavia have vehemently denied that accusation but didn’t exactly help themselves when their players failed to join Arsenal in taking a knee before kick-off.

At least they were able to welcome back goalkeeper Ondrej Kolar, playing his first game since his skull was fractured by Kemar Roofe’s head-high challenge during that stormy Ibrox encounter.

Kolar was wearing both a face mask and helmet to protect his injury yet showed no fear when he dashed out to prevent Lacazette from reaching Bukayo Saka’s early through ball. 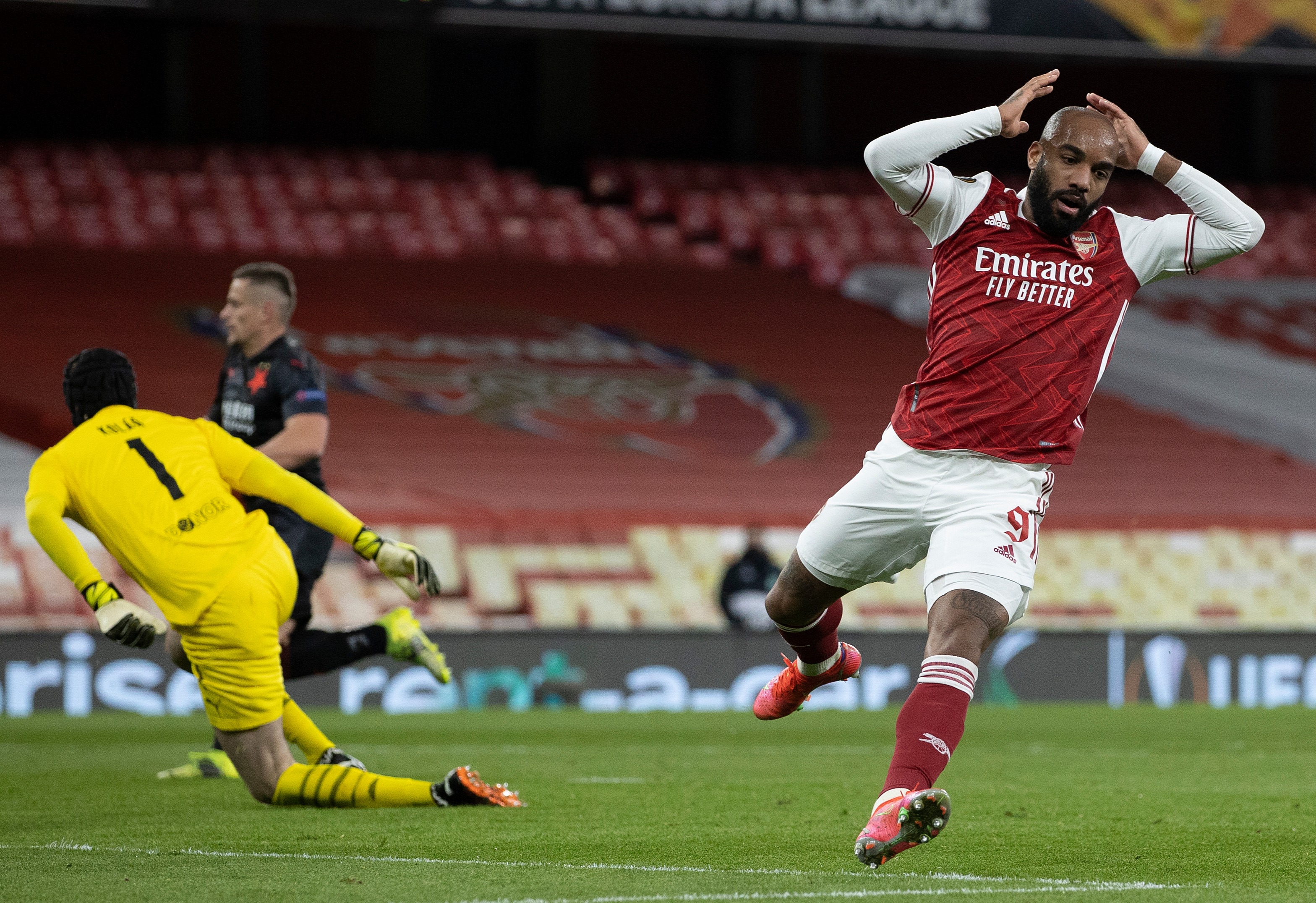 Alexandre Lacazette reacts to a missed chance at the EmiratesCredit: The Sun 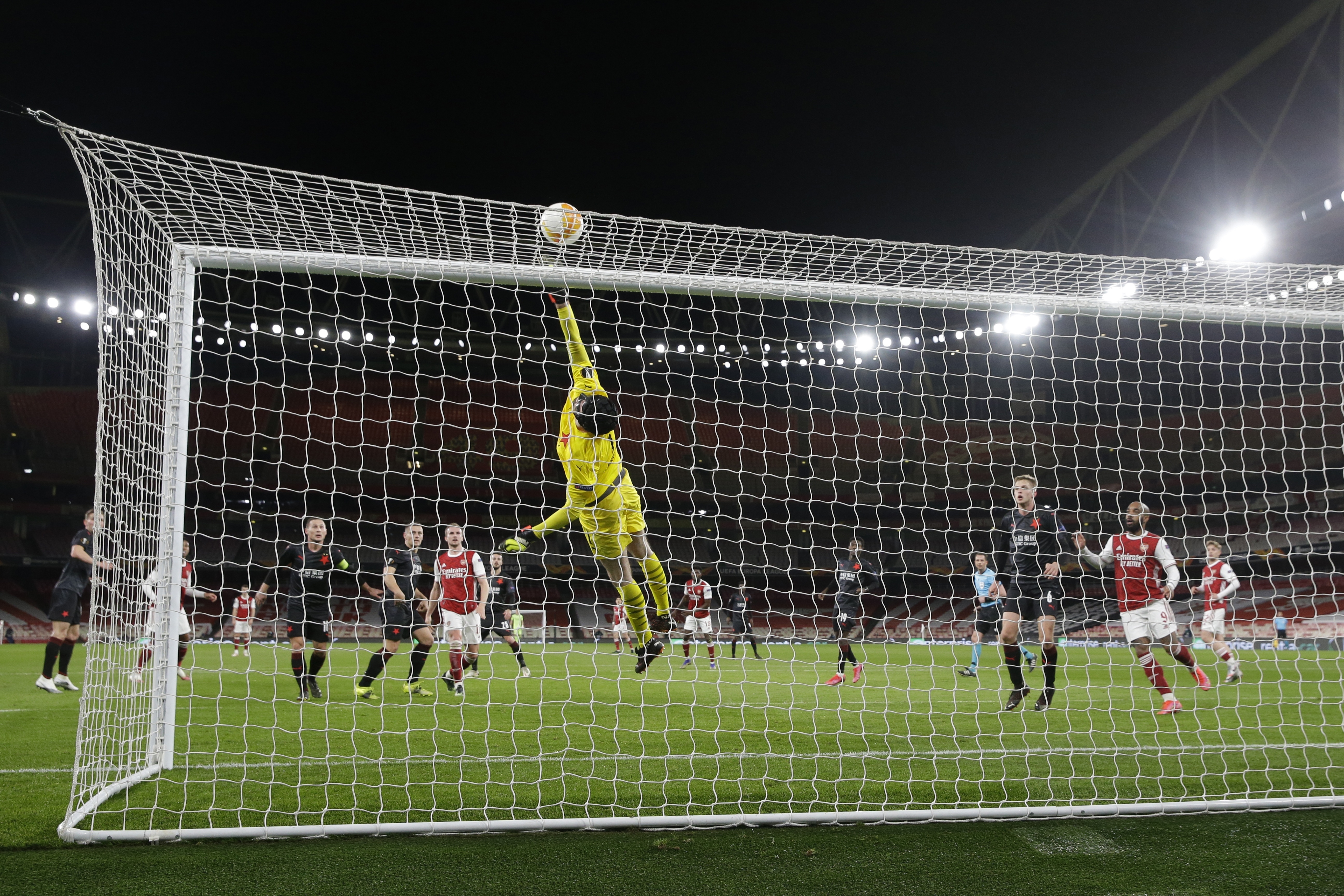 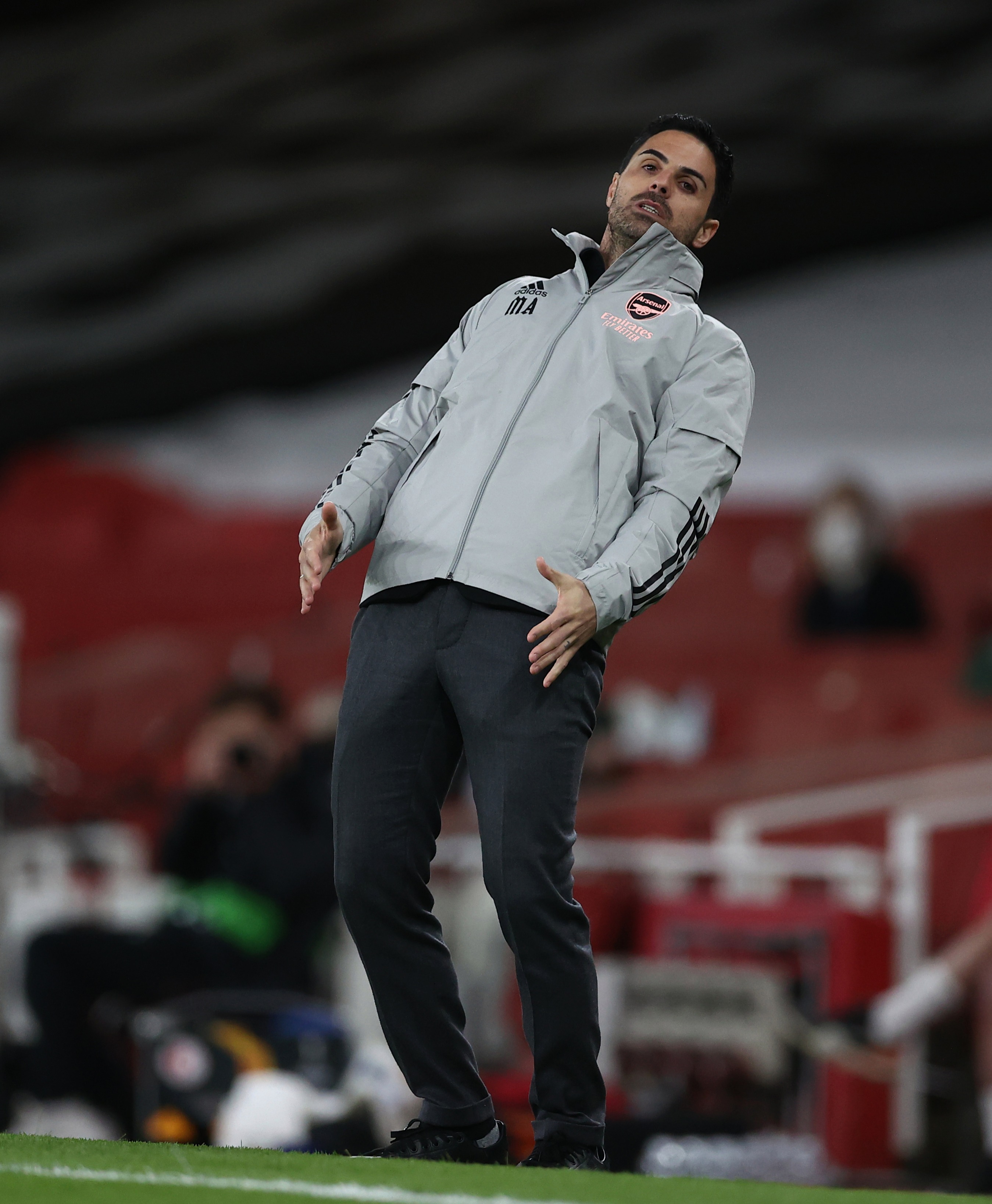 Mikel Arteta cut a frustrated figure for most of the nightCredit: The Sun

In fact it was Arsenal keeper Bernd Leno who had more to worry about during the opening exchanges when the dangerous Lukas Provod belted a vicious first time effort just over from the edge of the area.

Arsenal’s first attempt on goal didn’t arrive until the 25th minute, a tame header from Gabriel which was easily dealt with by Kolar.

And that inability to trouble their opponents’ makeshift defence was clearly getting to Arteta as he tried to elicit a response from his team.

They should have been ahead on the half hour when Rob Holding stepped out of defence to play Saka in on goal with a delicious pass.

But with only the keeper to beat and Slavia looking in vain for a linesman’s flag, the teenaged England star rolled his shot wide of the far post.

Holding tried to take matters into his own hands with a looping header from Cedric’s cross which forced a first save of the night from Kolar, arching backwards to tip the ball to safety from under his crossbar.

And Willian almost broke the deadlock with a 47th minute free-kick which struck the outside of the post after Saka had been dragged down on the edge of the area.

With Kieran Tierney ruled out by a knee injury for at least the next four weeks, Saka appeared to be the obvious candidate to deputise at left-back.

But Arteta clearly believes the youngster offers far too much going forward even if his final ball still occasionally lets him down.

Arsenal thought they had finally found a breakthrough when Lacazette muscled Oscar Dorley off the ball on the halfway line to give himself a clear run on goal.

But with an absolute eternity to weigh up his options, the striker fired against the bar with Emile Smith Rowe unable to connect with the rebound.

It was typical of Arsenal’s lack of killer instinct and now that carelessness could come back to haunt them next week.