ARSENAL’S move for Gabriel Jesus will go a long way to replacing the outgoing Alexandre Lacazette, who has moved back to Lyon on a free transfer.

But arguably the £45million Brazil star will not be the most important signing this summer for Arsenal.

Fabio Vieira could be the most important signing of the summer for ArsenalCredit: Getty

Fabio Vieira has joined Arsenal from Porto for £35millionCredit: Getty

That honour could well instead go to the 22-year-old Portuguese international midfielder Fabio Vieira, a name that immediately got the Gunners fanbase excited and not just because of his famous surname.

In truth, however, despite both being central midfielders, Fabio Vieira and Patrick Vieira are nothing alike in terms of playing style.

Fabio Vieira is very much a number ‘8’ who is most comfortable in an advanced midfield position when his side are in possession.

He has even spent time playing as a second striker for his side in Portugal. 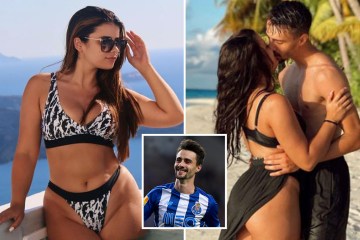 His £35million signing will change the way that Arsenal and Mikel Arteta plan to use their midfield going into next season.

1. Creativity in the final third

It will be fascinating to see how Vieira’s signing affects the way that Arsenal play in the build-up and attacking thirds of the game.

Last season we tended to see Martin Odegaard act as the main link between the midfield and the attack as he positioned himself towards the right side and in the channel.

Granit Xhaka and Thomas Partey were often positioned behind in something approaching a double pivot. 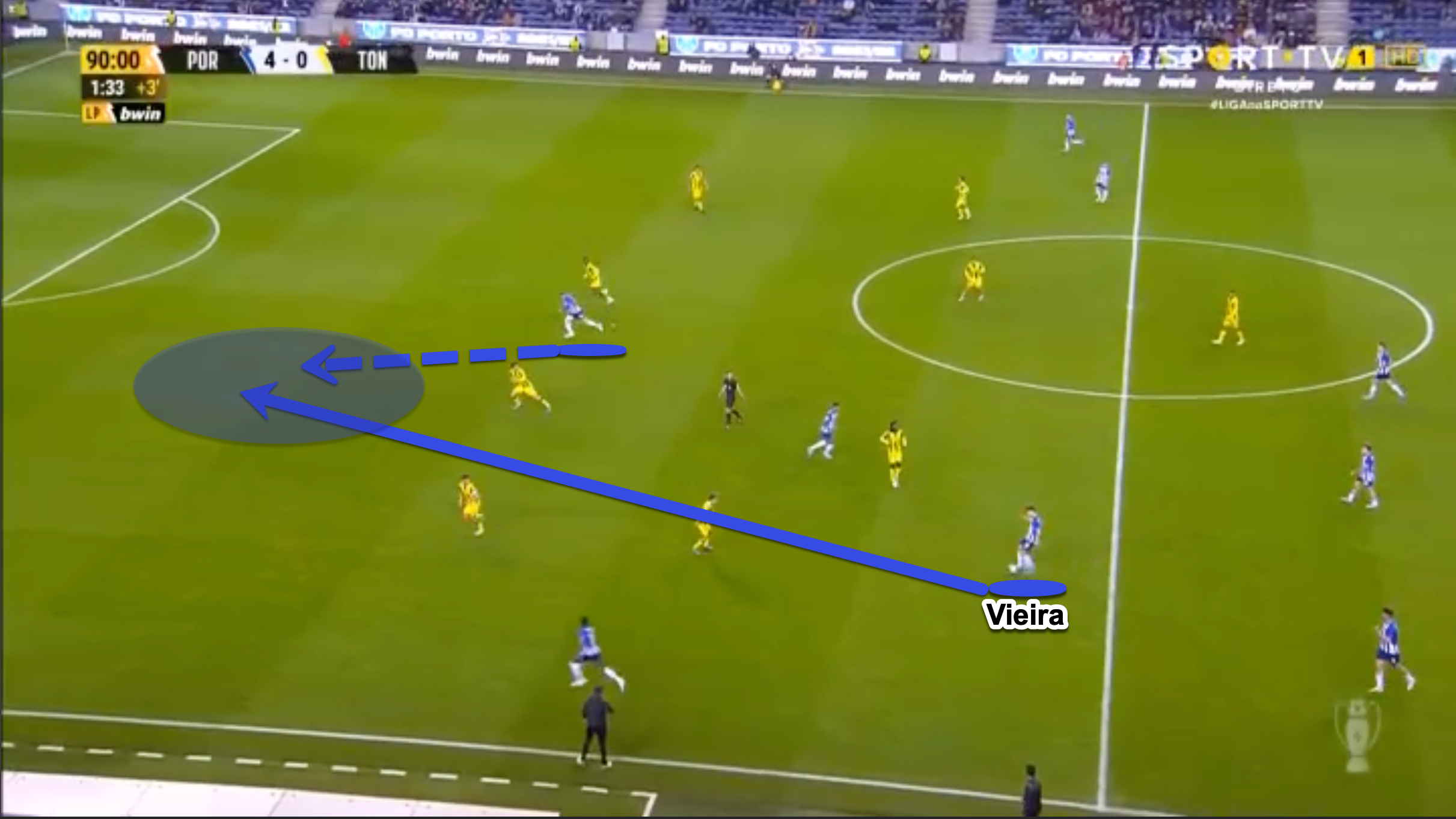 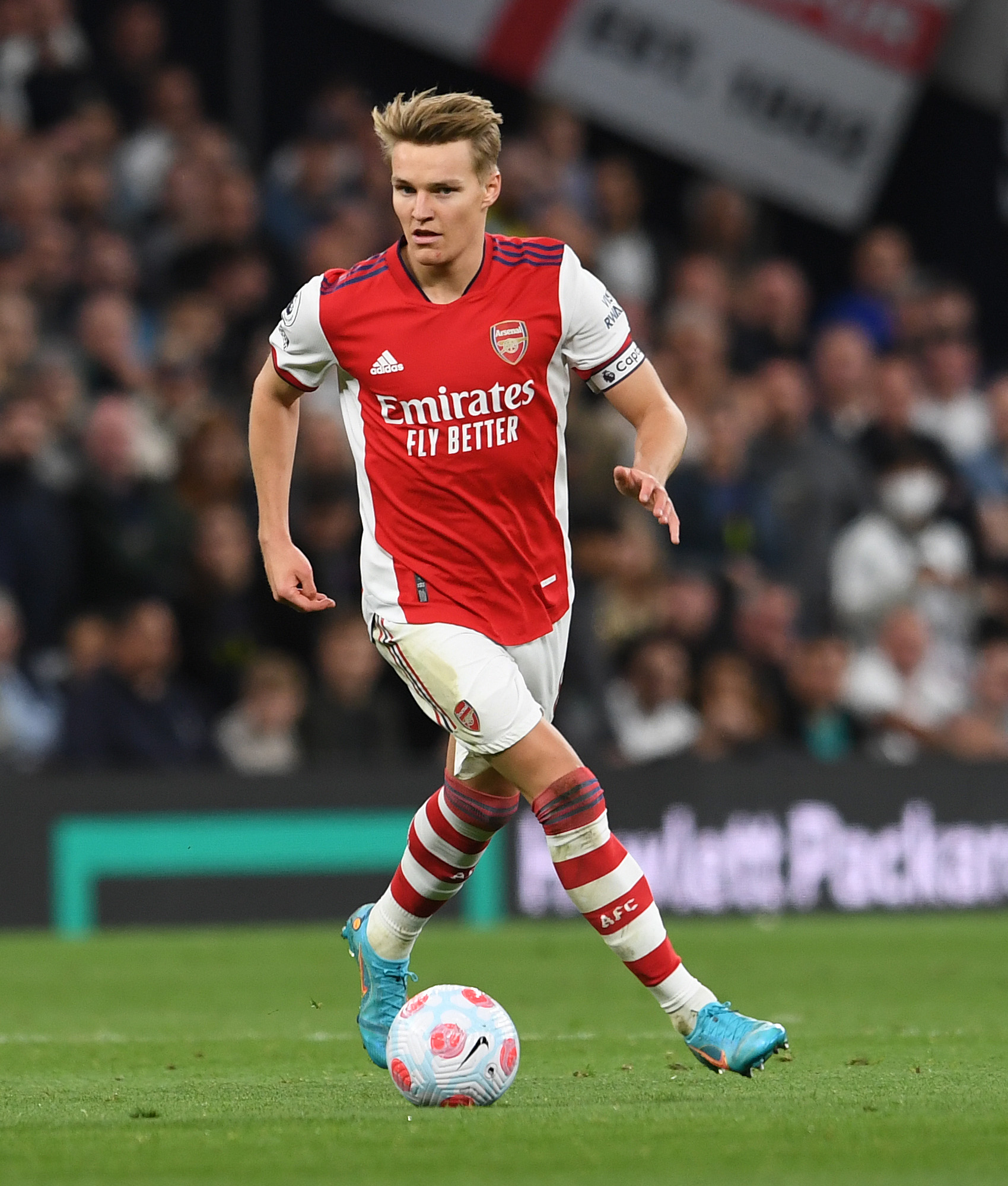 While Xhaka has the ability to change the angle of the attack through diagonal cross-field passes and Partey provides powerful runs that access space and disrupt the opposition defensive structure, neither is particularly creative in the final third.

There were games last season in which the opposition were able to negate the creative threat of Odegaard and this effectively shut down the Arsenal attack.

Vieira is a midfield player who understands how to position himself in space in the channels.

He also provides real threat either in terms of taking possession on the half-turn and driving forward at the opposition or when receiving the ball and then finding passing lanes that break the last line and release team-mates running into space. 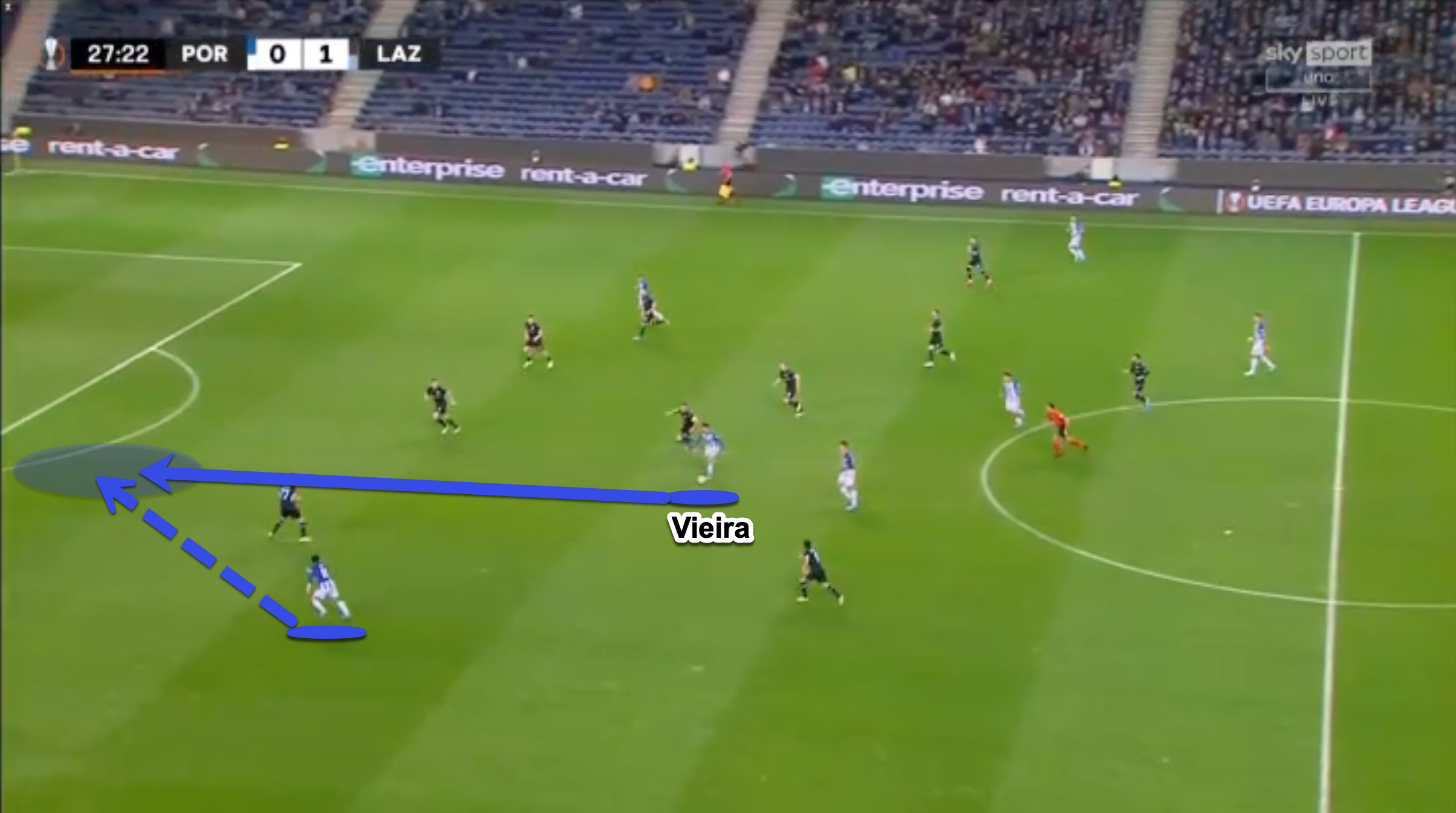 Vieira has the ball in the opposition half, and finds the space to play a well-weighted through ball

In addition, Vieira appears comfortable playing in the channel on the left-hand side of the pitch.

This should provide real balance to the Arsenal midfield with Odegaard having a preference for playing towards the right.

2. Active out of possession

There is always a risk when you look to change the structure of the midfield that you can be left without balance, either in the attacking or defensive phase.

And with either one of Partey or Xhaka likely to drop out to accommodate Vieira, there would be a concern that Arsenal would lose something defensively.

Odegaard is, of course, very active against the ball in terms of pressing aggressively and blocking passing lanes. 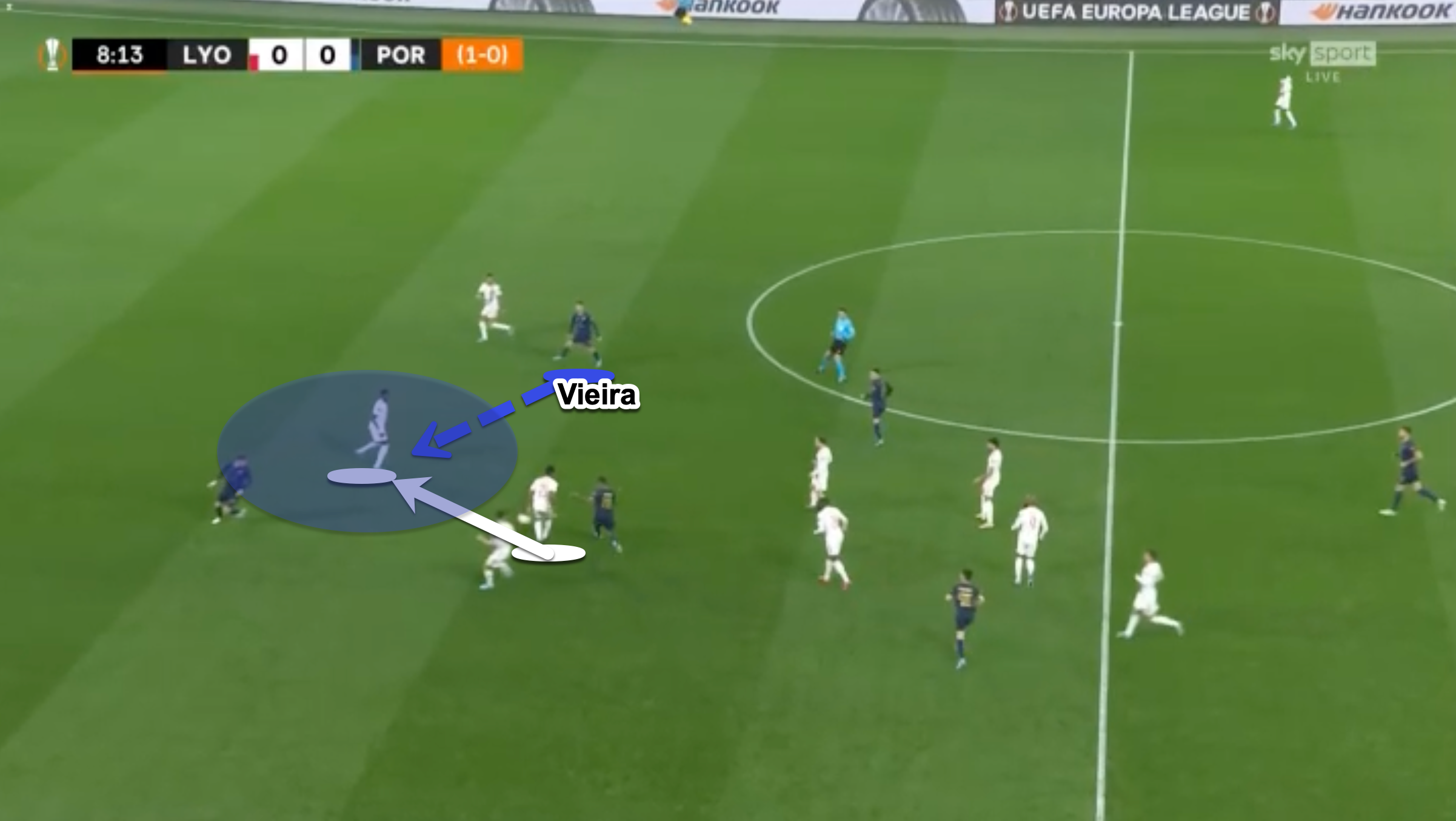 And Vieira is very much a midfield player in the same mould. He is willing to work hard against the ball and he is actually very strong when engaging in defensive duels and looking to win the ball back for his team.

Vieira is capable of playing in higher positions in the defensive phase and of looking to press the ball and engage the ball carrier.

He is quick and proactive in terms of looking to close down the player receiving the ball and he will be aggressive when it comes to getting to the ball and looking to make a challenge. 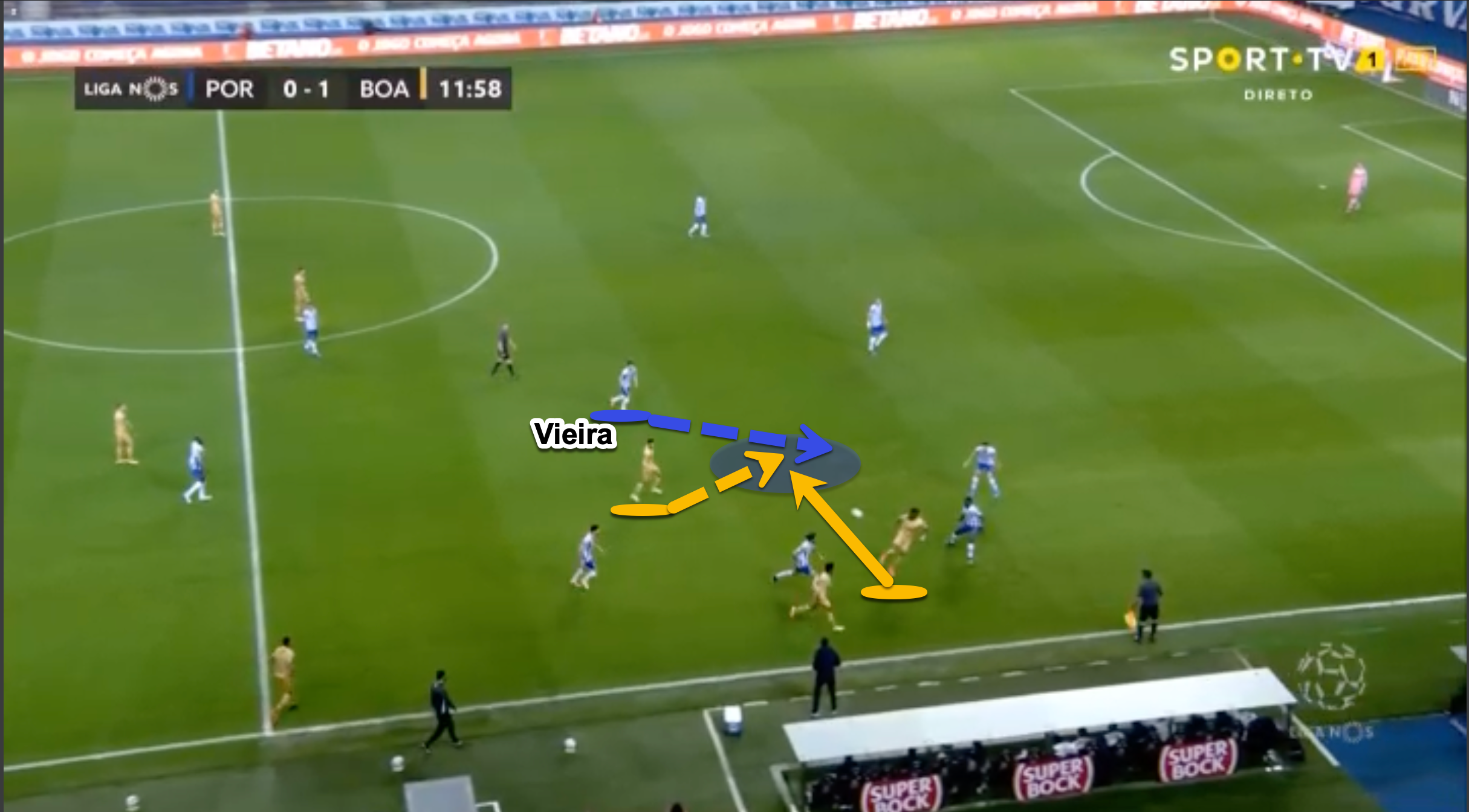 As the ball is flicked inside to release the runner, Vieira is quick and aggressive in getting across to challenge for the ball

The Portuguese midfielder is an intelligent player and he understands when there is value to step out in order to look for a challenge and when he should hold a deeper position and look to block passing lanes in the defensive block.

While Vieira is not the most physical of central midfielders, he does have good core strength and the ability to time his tackles in order to give himself the greatest opportunity to win the ball back.

The signing of Vieira signifies an attempt by Arteta to move more fully towards the system of play he learnt while working for Man City under Pep Guardiola.

In Vieira and Odegaard, Arsenal will have two midfield players who are capable of playing as the two free ‘8’s in a 4-3-3 shape and this will provide more balance to the attacking structure. 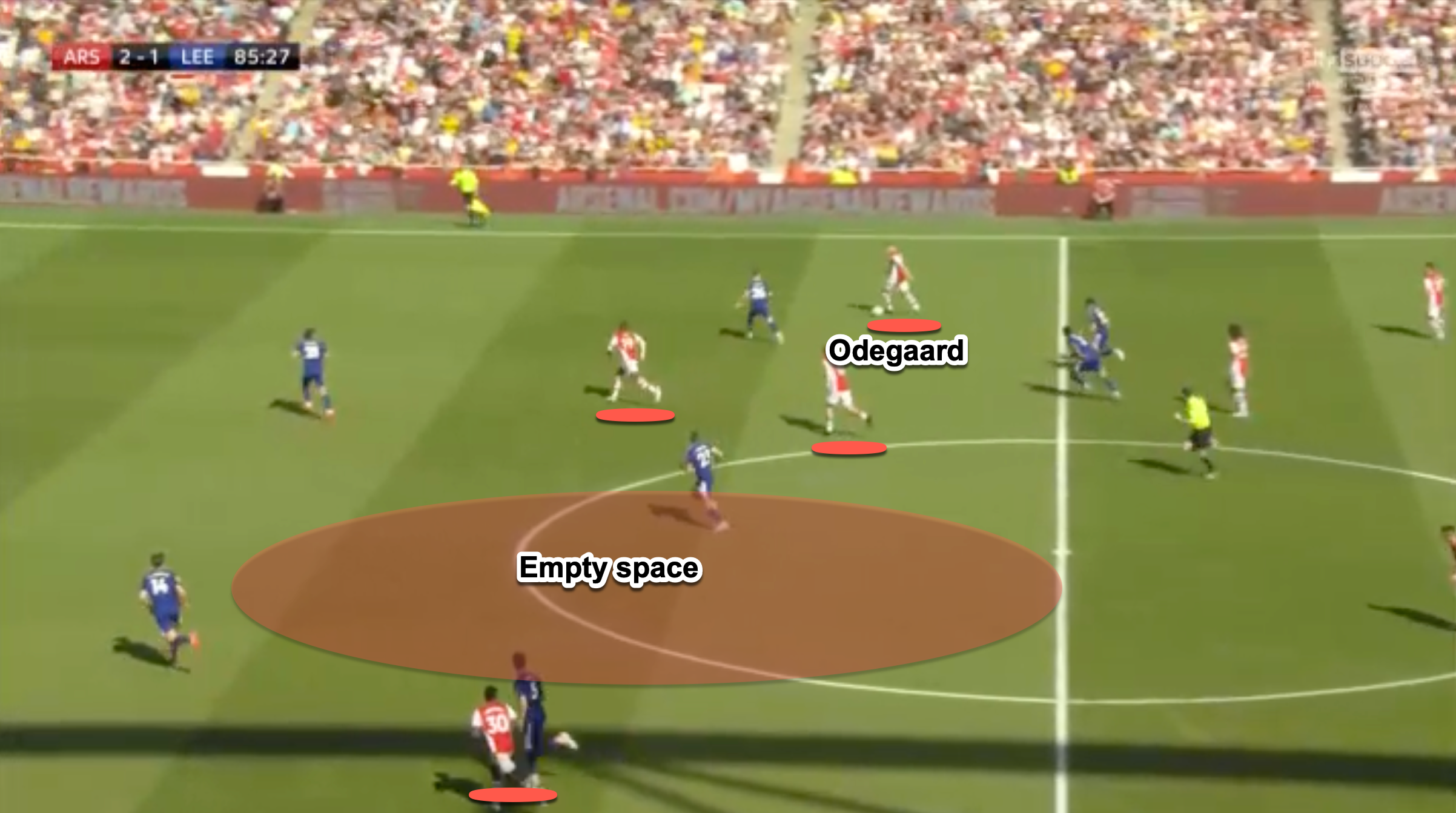 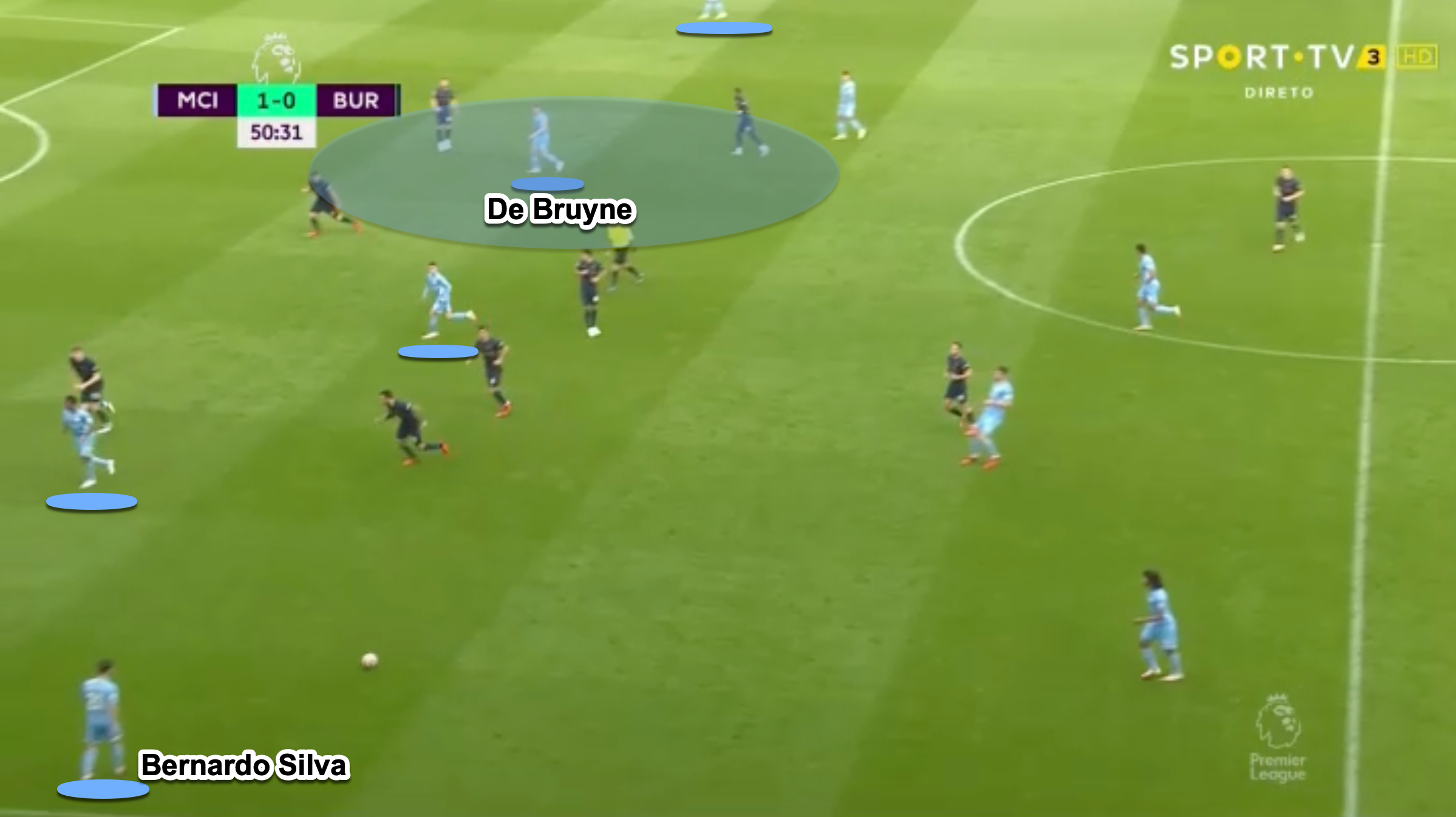 As Manchester City attack, Arsenal are occupying space across the width of the pitch

One of the features last season for Arsenal under Arteta was that of the three main midfield players only Odegaard would look to occupy high positions on a regular basis.

Both Partey and Xhaka showed that they were willing to support from behind and make runs to support but it was the Norwegian international that took the bulk of the responsibility for joining the midfield and attack.

During his time at Man City, Arteta would have grown accustomed to having the likes of David Silva, Bernardo Silva, Ilkay Gundogan and Kevin De Bruyne, all of whom were capable of playing as the ‘8’ and linking the midfield and attack.

With Vieira and Odegaard playing together, the midfield players for Arsenal will be more inclined to push forward to occupy space and create dangerous situations in the final third and around the penalty area.

As we said, Arsenal could well have already landed their most important signing of summer.

Vieira is dynamic, creative and good defensively – and might also mean Arteta can finally move on from Xhaka. What’s not to like?