They are football’s equivalent of tragicomedies. Own goals litter the football landscape with an intoxicating mixture of laughter and tears. When Sergio Reguilón sliced the ball spectacularly past Hugo Lloris with a swing of his right foot it was the 37th own goal of this Premier League season and the 1,000th in Premier League history. Reguilón’s own goal was an appropriately calamitous way to hit this landmark. There was certainly no need for any adjudication panel to decide whether he had got the last touch. His sliced volley would not have looked out of place on Hackney Marshes on a Sunday morning, prompting Gary Lineker to tweet: “As own goals go, that’s an absolute worldy from Reguilón.”

The very first Premier League own goal was not quite as spectacular but it was equally disastrous. Nottingham Forest goalkeeper Mark Crossley had made headlines by saving a penalty from Lineker in the 1991 FA Cup final and he would become the only keeper to blot Matthew Le Tissier’s record from the spot in 1993, but his own goal in September 1992 was the archetypal goalkeeper howler. Crossley had comfortably caught the ball from a tame header by Colin Hendry. He was under no pressure and there was not a soul near him when he inexplicably rolled over and literally threw it into the net. “I was a young lad and was making lots of mistakes,” he later recalled. “Little did I know that it was the Premier League’s first own goal and it would become a famous pub quiz question. I always get that one right.”

When discussing keeper catastrophes there has to be a mention of Aston Villa’s Peter Enckelman. Ten years after Crossley’s costly error, Enckelman was responsible for an epic mistake. Monday 16 September 2002 will be forever etched in the hearts of Birmingham City fans as it was their first meeting with Aston Villa in the Premier League, and the first Second City league derby since 1987. The Blues were 1-0 up thanks to a goal from Clinton Morrison when, with 13 minutes remaining, Olof Melberg took a throw-in back towards Enckelman, who inexplicably allowed the ball to roll over his foot and trundle into the Villa goal.

“It should have been the easiest thing in the world to control,” Enckelman told the BBC. “But the next thing I knew I had missed it and it was in the net. I honestly don’t think I touched the ball. I made a blunder and that’s it. I know the rules – a throw-in cannot go straight in.” Unfortunately for Enckelman, the referee David Elleray judged that he had made the slightest of touches on the ball and gave the goal – to Enckelman’s dismay and the delight of the crowd at St Andrews.

A Birmingham City fan shows his appreciation to Aston Villa keeper Peter Enckelman after his gaffe in 2002. Photograph: Andy Hooper/Shutterstock

Garry Flitcroft was the first outfield player to score an own goal in the Premier League, his calamity coming just a week after Crossley’s. Peter Reid attempted to clear a corner but only succeeded in hitting it straight at Flitcroft before it ricocheted into the net. Reid tore into the teenager, which was a little harsh as he was equally culpable for the cock-up. It was the only goal of the game and gave Middlesbrough the three points, no doubt adding more fuel to Reid’s unjustified fire.

Manchester City fans would become accustomed to watching their players find the wrong net, led by the man who tops the Premier League charts as the only player to reach double figures for own goals. If there was an annual award for the footballer who scores the most own goals in a season, it would have to be called “The Richard Dunne Trophy”.

His first was a classic. It was December 2004 and City seemed to be coasting to a 1-0 win over bottom of the table West Brom, who had been reduced to 10 men as early as the 17th minute and were rarely venturing out of their own half. In the 85th minute, Paul Robinson punted a long ball forward more in hope than expectation. There seemed to be little danger but, as David James came out of his area to deal with the ball, it cannoned off Dunne and was already over the line by the time Robert Earnshaw followed it into the net. As an exercise in shooting oneself in the foot, it was a masterpiece. 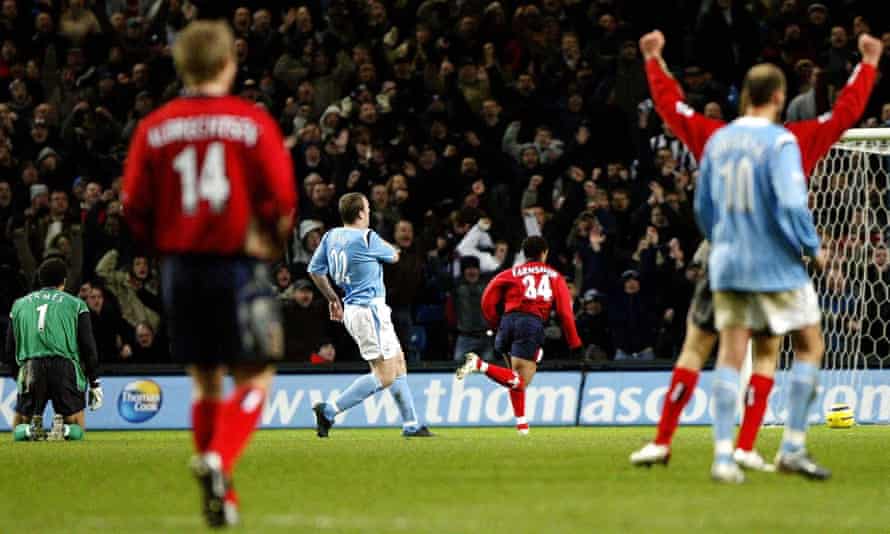 Richard Dunne puts the ball into his own net against West Brom. Photograph: Dave Kendall/PA Images

Dunne was at it again a few weeks later, this time in the Manchester derby. He was involved in the opening goal of the game, tackling Wayne Rooney and seeing the ball ricochet into the net. He was not credited for that goal but his name was on the scoresheet within seven minutes, hacking a cross into his own net. Even though Dunne added another four own goals to his collection before moving to Villa in 2009, he won City’s player of the year award four years on the trot and was made captain in 2006. City fans were clearly a forgiving bunch.

Vincent Kompany took over as Manchester City captain and, while he was not nearly as prolific as his predecessor at the wrong end, one of his three own goals was truly spectacular. Away at Fulham in December 2013, Kompany had already scored to put City 2-0 up but he then made a complete Horlicks of cutting out a cross at the near post with his left foot, only contriving to slice the ball into the air before it looped rather apologetically over a helpless Joe Hart and into the far corner to bring Fulham level.

Fifty-two players have scored at both ends in the same match, Issa Diop becoming the most recent as West Ham lost 3-2 to Newcastle earlier this season. It is a star-studded list that includes Gareth Bale, Wayne Rooney and even David Beckham, who quickly made amends for the only own goal of his Premier League career at Ewood Park in August 2001 through a quickly taken free-kick that had Brad Friedel vainly back pedalling as the ball sailed over his head.

Kompany’s error at Craven Cottage was one of a record-breaking 49 own goals during the 2013-14 season, when he was joined by other luminaries such as Mikel Arteta, Dimitar Berbatov, Harry Kane, Michael Carrick, John Terry and Kolo Touré. Martin Skrtel overshadowed them all by scoring four, which remains the most by an individual in a single Premier League season.

Skrtel is joint second behind Dunne on the all-time list of Premier League own goals alongside Phil Jagielka and his fellow Liverpool centre-back Jamie Carragher. The low moment for Carragher came in September 1999, when he scored two own goals in a 3-2 defeat to Manchester United. And as his fellow Sky Sports pundit Gary Neville is always keen to point out, both were scored in front of the Kop. In 508 Premier League matches, Carragher scored just three at the right end, so his goals column is in negative territory. 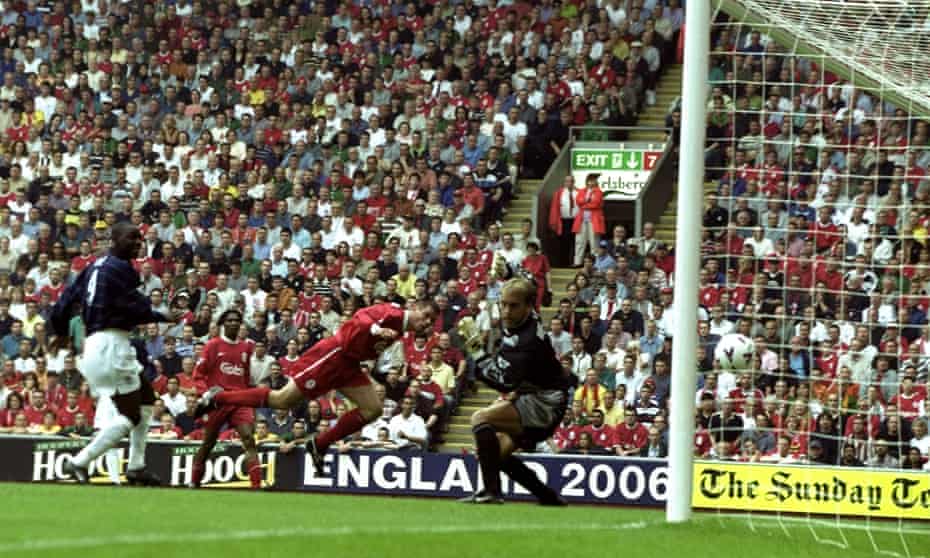 Jamie Carragher heads the ball into his own net against Manchester United at Anfield. Photograph: Ben Radford/Getty Images

Leicester hold the record for the most own goals in a season, having been responsible for eight of the 37 own goals scored in 2003-04. Those own goals cost them eight points and pretty much ensured their relegation. Their top scorer that season, Les Ferdinand, scored just 12 goals, while Paul Dickov and Marcus Bent were the only other players to score more than eight. By contrast, Cardiff City managed to play in the Premier League for two seasons without scoring a single own goal. Forty-nine clubs have featured in the Premier League and they are the only one to never have found their own net.

As one of the six ever-presents in the Premier League, Everton have accumulated the most own goals of any club, with 53 – six more than Aston Villa. Funnily enough, Dunne started his career at Goodison but never scored an own goal during his five seasons at the club. After leaving City, Dunne continued his uncanny habit of putting the ball into his own net, with three more during his three years at Villa. In October 2014 he scored his tenth and final own goal in QPR’s game against Liverpool. Although, to be fair, he was not alone in this game. Stephen Caulker and Steven Gerrard also found the wrong net in Liverpool’s 3-2 win.

Sunderland were even more incompetent in their 3-1 defeat to Charlton in February 2003, delivering a masterclass in tomfoolery. Not once, not twice, but three times they contrived to score own goals in seven barely credible first-half minutes. As manager Howard Wilkinson mournfully reflected afterwards: “There’s not a lot you can do about that. It was unbelievable. I’ve never been involved in a game, or watched a game, where there were three own goals.” 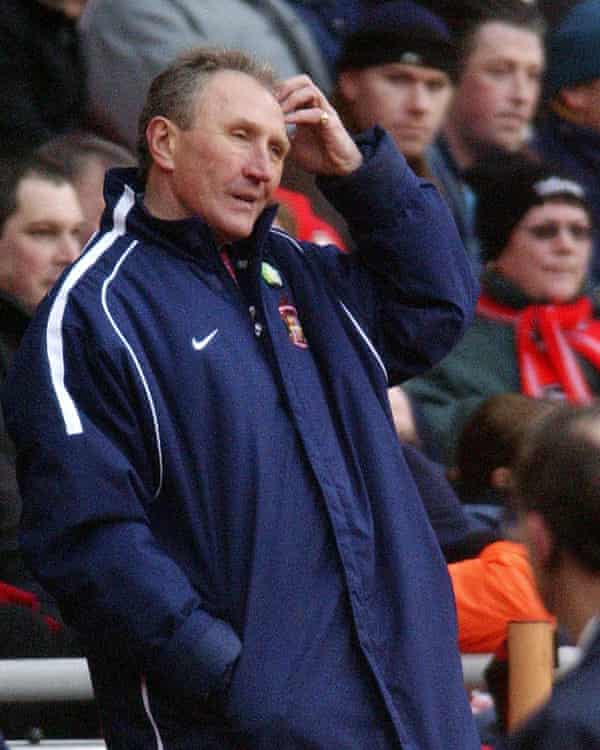 It all started in the 24th minute, when Stephen Wright put an end to a game of penalty area pinball by planting it into his own net. Not to be outdone, Michael Proctor scored two own goals in quick succession for Wilkinson’s beleaguered men. The defeat meant that Sunderland were consigned to the bottom of the table, a position they made their own. Sunderland did not win a single point in their remaining 12 games, finishing on a paltry 19 points, which was the lowest total in Premier League history at the time. In fact, they only scored three goals in their last six home fixtures, matching their quickfire trinity of own goals on that fateful February afternoon.

If Dunne is the clear leader in terms of sheer numbers, then Crystal Palace defender Tony Popovic is almost certainly in pole position for aesthetics. He conjured up one of the most remarkable efforts against Portsmouth in September 2004, just a few months before Dunne opened his own account. Popovic performed what could be best described as a scorpion own goal. A harmless ball into the box was acrobatically hooked into the net by the Australia international with a nonchalant flick of the leg followed by a rueful flick of his hair. If it had been scored at the right end it would have been a stroke of genius, but it was more a stroke of generosity to his startled opponents. In fact, it was not dissimilar to Reguilón’s effort. Both will undoubtedly be included in the various compilations that will be assembled to mark the first 1,000 own goals of Premier League history.