ROSS STEWART is known as the Loch Ness Drogba.

And the Scottish striker hopes the League One monster that is Sunderland finally show their teeth in tomorrow’s play-off final against Wycombe at Wembley. 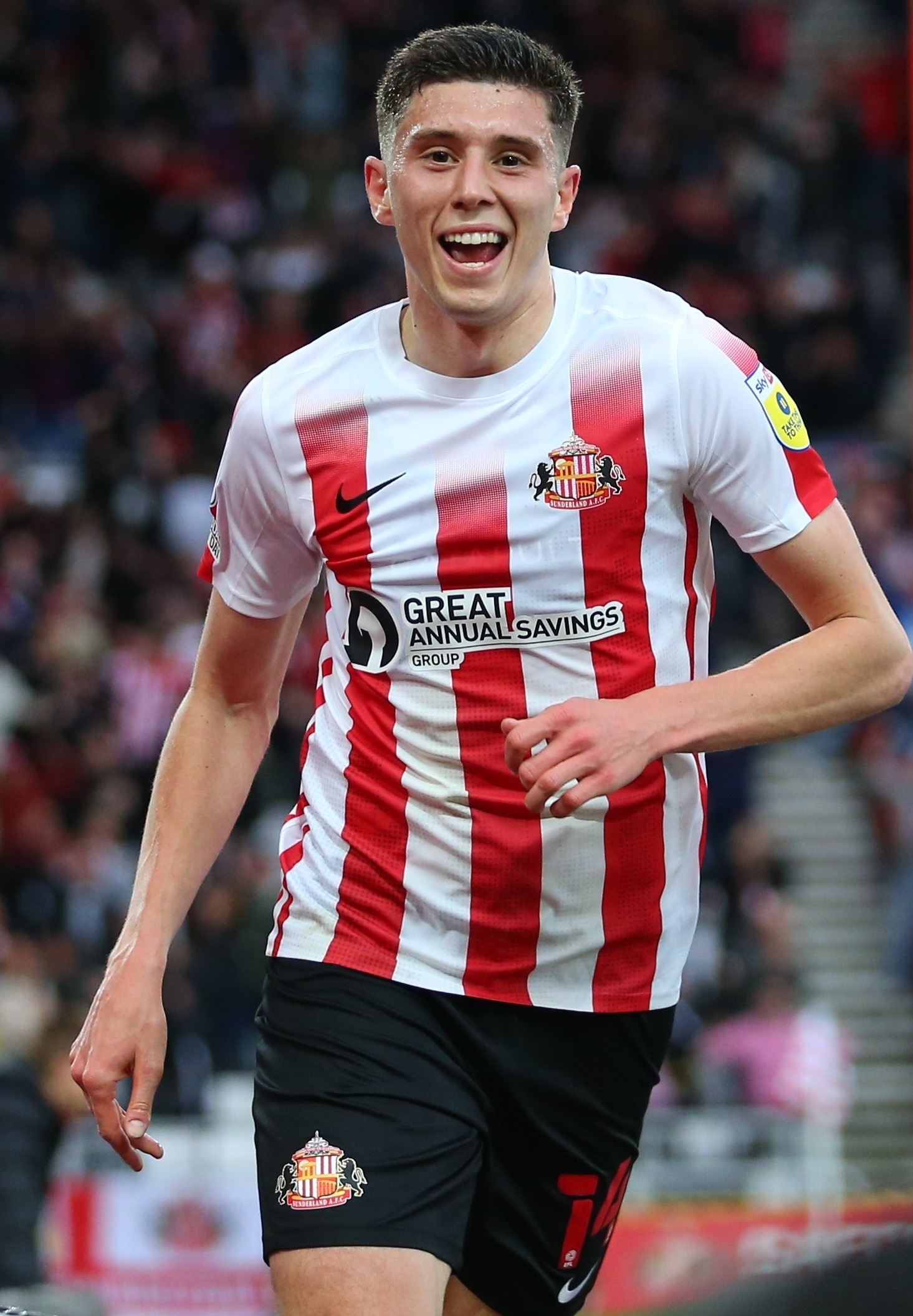 The Black Cats have been stuck in English football’s third tier for FOUR seasons now following their back-to-back relegations from the Premier League.

But they stand potentially 90 minutes away from promotion back to the Championship at the third play-off attempt.

And Stewart has provided them with some much-needed bite this season — scoring 25 goals.

Stewart, 25, told SunSport: “When I signed here in January 2021, I knew Sunderland were massive but didn’t realise how much so until I got here and saw the stadium and everything which goes with the club. 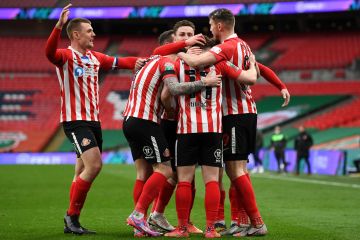 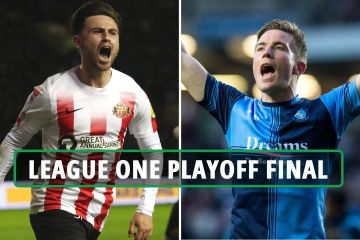 “The fans are so passionate and that has been see this season with the numbers that have been coming to our games up and down the country.

“It’s a club that’s probably way too big for this division — and we know how important this game is because it could take them halfway to where they should be, which is the Premier League.”

It is difficult to argue with that when you consider Sunderland boast the biggest average home attendances outside the top flight (31,426) and are even the 13th best-supported team in the country.

Stewart missed out on playing under the arch when the Black Cats got there last season in the Papa John’s Trophy as they beat Tranmere because he was an unused sub following his return from a hamstring injury.

But that game was played behind closed doors due to the pandemic.

The striker is no stranger to playing in front of large crowds in big stadiums, having played against both Old Firm clubs in Scotland during his time at Ross County and for Sunderland at the Emirates in the League Cup earlier this season.

Yet, although Stewart scored against Celtic, tomorrow will be beyond doubt the biggest game he has ever played in

This has been the best campaign of Stewart’s career.

And he said: “This is a season I’ve really enjoyed. I’m so happy to have stayed fit for all of it as well.

“I’m buzzing with my goals return. My first target was to get double digits, then to add five on to that and then another five. To have got to 25, I’m really happy with that.

“But I’d love to add to that at Wembley — but getting promotion would be the big icing on the cake for me.”

Stewart’s rise from Scottish youth football to today is quite a story.

Having heartbreakingly been released by Celtic as a kid, his dad paid £500 on top of a whip-round from Albion Rovers fans six years ago to allow the club to sign him from Kilwinning Rangers for £1,500 because they were skint.

The striker said: “I’ve sorted him a free ticket for Wembley — but would like to think I’ve paid him back now.

Stewart had so desperately wanted to make it a Celtic but was released when he was 16 because he had not beefed out enough to their liking.

I’m lucky to be here with the pathway I took but I want to play at the highest level I can and that’s the biggest motivation.

He said: “Like any youngster at Celtic, I had always wanted to play in the Old Firm game but unfortunately I was released. I was a late developer and had not grown physically strong enough at the time.

“When I joined as a kid, it was probably the best feeling I had ever had — to be at one of the biggest two clubs in Scotland.

“But, in the end because I hadn’t grown enough physically, I didn’t really play much in my final year.”

But rather than become disillusioned, Stewart stuck at it and joined Partick Thistle before playing senior football with Ardeer, Kilwinning, Albion Rovers, St Mirren, Alloa on loan before making his real breakthrough with Ross County — winning promotion with the club to the SPL.

He said: “I always knew I could play football. When you drop out of the system some people can think it’s not for me but I clawed my way back.

“I’m lucky to be here with the pathway I took but I want to play at the highest level I can and that’s the biggest motivation more than anything.”

THE Black Cats have never won a play-off campaign. Here is their tale of woe in the end-of-season shootout lottery.

Back then the club that finished 20th in the second tier went into a promotion-relegation play-off with the teams that finished third, fourth and fifth in the old third division. Sunderland, 20th, faced Gillingham over two legs and drew 6-6 on aggregate but were relegated on away goals.

Despite this defeat, the Black Cats went up to the top flight because Swindon were stripped of their victory after being found guilty of 36 breaches of EFL rules and the Robins were relegated to the third division for good measure.

An incredible eight-goal thriller had to be decided by penalties which also proved to be an epic. Fourteen spot kicks were taken with Michael Gray seeing his one saved by keeper Sasa Ilic and the Addicks went into the Premier League.

Having lost 3-2 at Selhurst Park, the Black Cats thought they were heading to the final 2-0 up at home through Kevin Kyle and Marcus Stewart strikers but Chris Powell netted in the last minute to force extra-time. Jeff Whitley missed the decisive spot-kick.

Aiden McGeady put the Black Cats in charge with a first-half goal but Nathan Thompson levelled with eight minutes left to force extra-time. Jamal Lowe put the Addicks in front but McGeady levelled at the death before Sunderland lost again 5-4 on penalties.

Having lost 2-0 at Sincil Bank, Sunderland roared back to level the tie 2-2 by netting two early goals at the Stadium of Light through Ross Stewart and Charlie Wyke but Tom Hopper scored to break their hearts in the second half.

Stewart was signed by Lee Johnson — who he enjoyed playing for before the ex-Sunderland boss was sacked — but is loving life playing for fellow Scot Alex Neil since he took over in February.

Since the former Norwich and Preston boss took over, the Black Cats have only lost one of his 17 games in charge, winning nine.

And Stewart said: “The manager has been excellent. You have to give him big credit.

“The one thing he has done since he came in is to shore up the defensive part of the team.

“We have been getting results and not getting beat. We have only lost one game since he has been here.

“He has really turned the club round in a sense and got us fired up. The players are really enjoying working and playing for him. 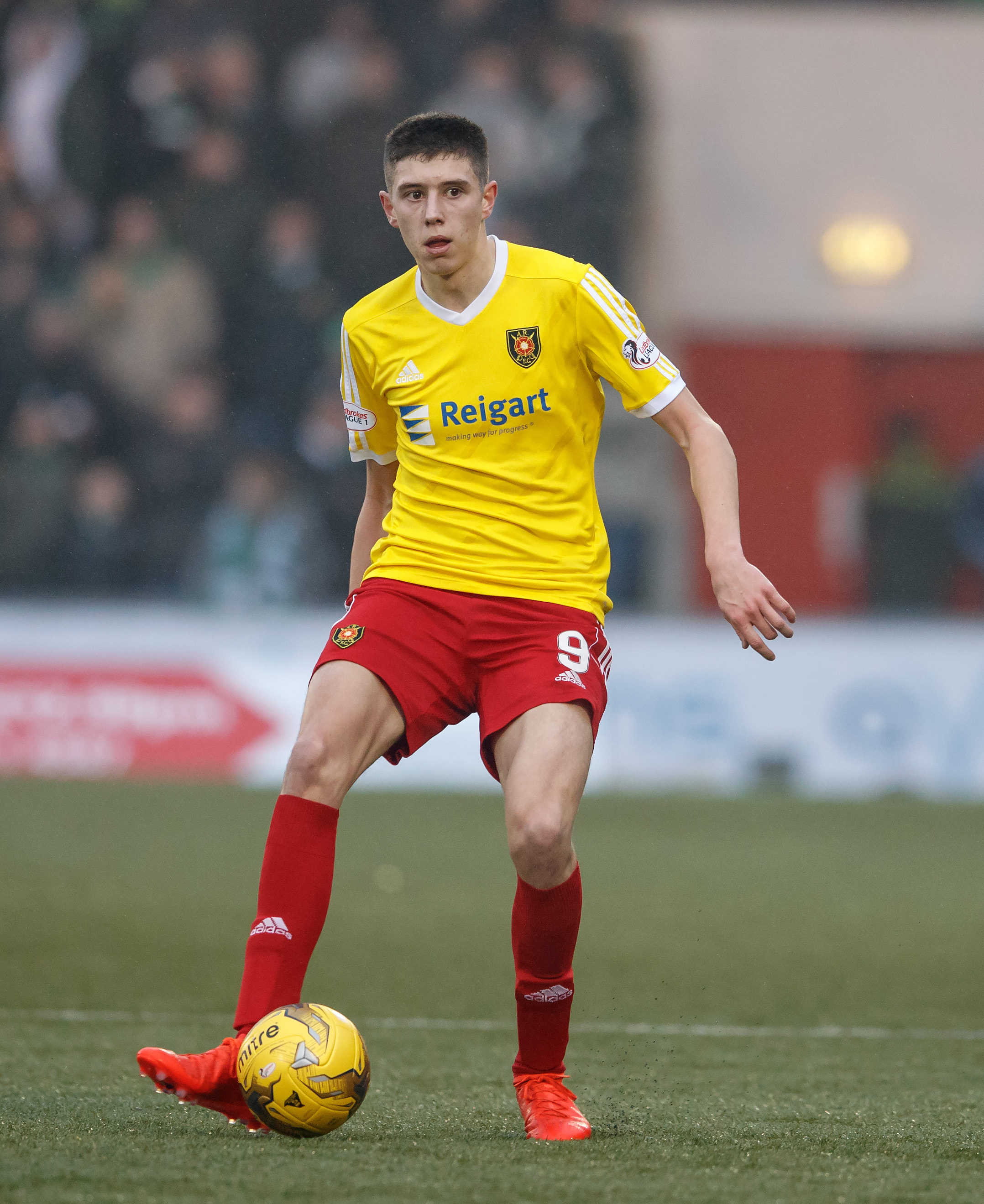 He rose through the ranks in Scottish footballCredit: Kenny Ramsay – The Sun Glasgow 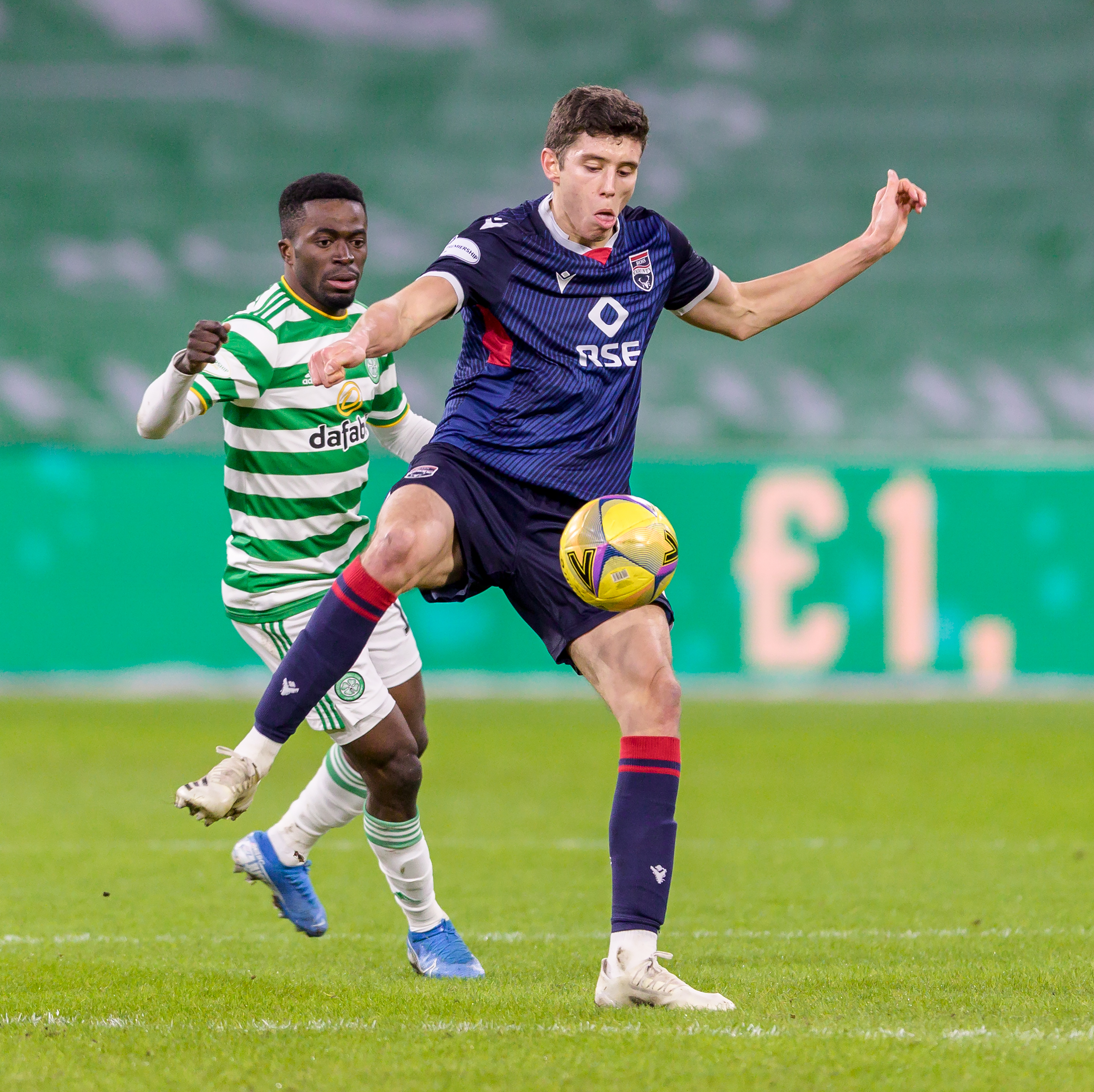 In action for Ross County against boyhood club CelticCredit: The Sun 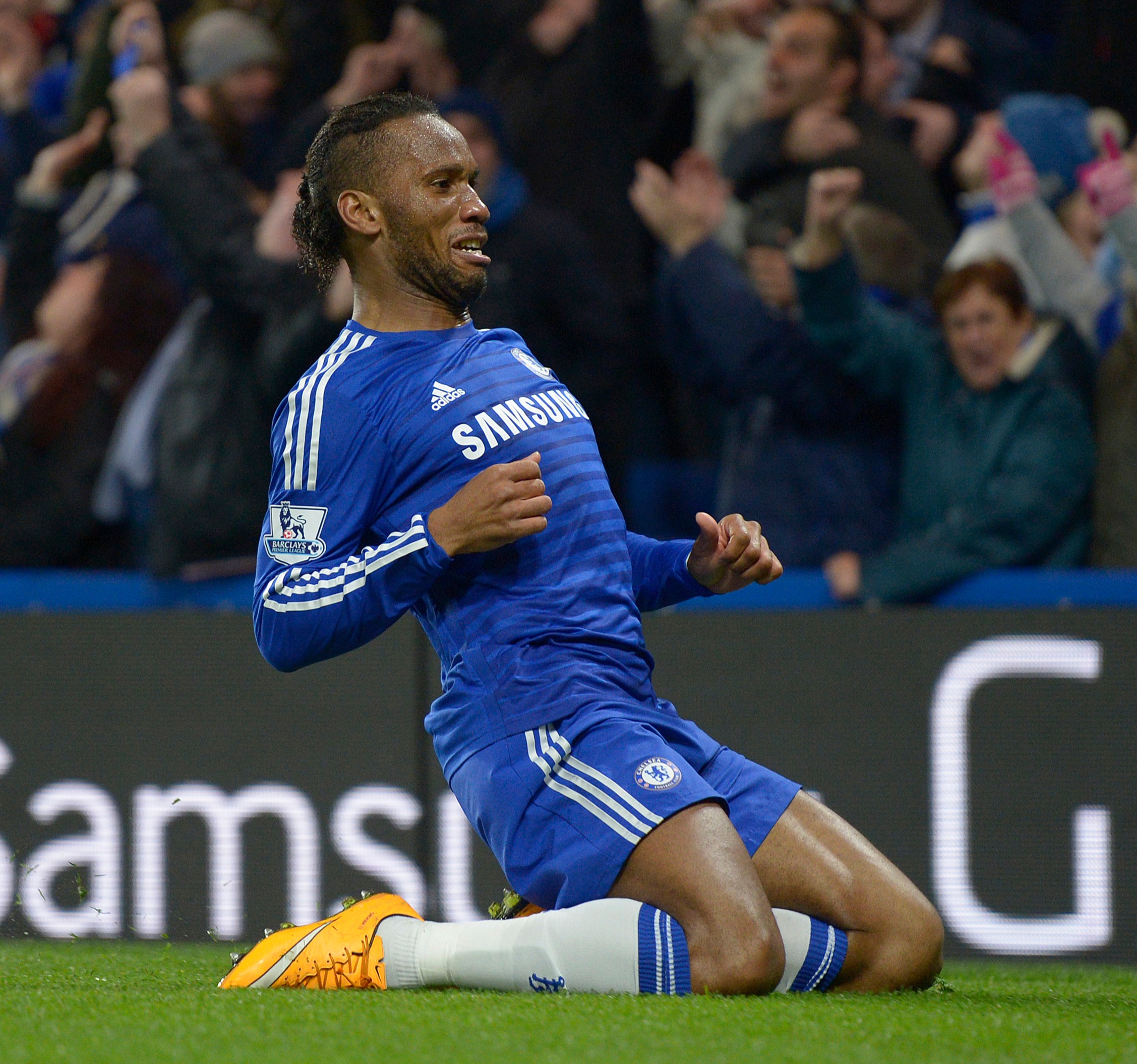 “His training is really good, the recovery, the tempo and high intensity. Everything we do has been great.

“He has been a breath of fresh air for a few boys and you can see that with the performances.”

Stewart has no idea who coined his nickname “The Loch Ness Drogba” — which he loves — but revealed that his favourite player growing up was Thierry Henry.

He said: “Arsenal was my team as a kid because I loved watching Henry.”

Maybe now he is currently living in Newcastle, they should call him: “The Tyneside Thierry.”

But I think those Wearside Mackems might have something to say about that!