CHELSEA have been handed a major boost in their pursuit of Jules Kounde after Sevilla reduced their asking price for him, according to reports.

The departures of Antonio Rudiger to Real Madrid and the loss of Andreas Christensen to free agency has left Chelsea looking light-weight in defence, leading them to pursue a move for Kounde.

Kounde in action for France in their UEFA Nations League game against DenmarkCredit: Getty

The Blues wanted the Sevilla defender last summer, but failed to agree a deal for him due to Sevilla’s asking price of £68million.

However, this summer things appear to be different as Sevilla’s new asking price has been set at £55million.

According to Marca, the Spaniards will not negotiate below this line and will play hardball after seeing other deals for Diego Carlos, Darwin Nunez, and Aurelien Tchouameni come out to high values.

Sevilla earned £26million for the sale of Carlos to Aston Villa, while Benfica are set to receive £85million from Liverpool for 22-year-old Nunez. 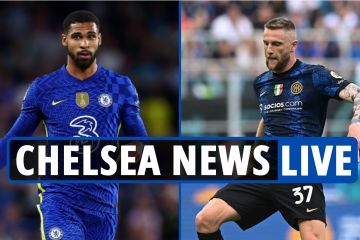 La Liga champions Real Madrid are also said to be forking out more than £85million for French midfielder Tchouameni.

Kounde, 23, represents an investment for the future, but with two years left on his current deal in Spain the club can afford to be stubborn with their valuation.

They signed Kounde in 2019 for around £22.5millon from Bordeaux, so would gain a significant profit if Chelsea pay the full £55million price tag.

Kounde has earned nine caps for the French national team, including one appearance in an unfamiliar right-back role at last summer’s European Championships.

He has played 133 times for Sevilla, scoring nine goals.