SEBASTIAN VETTEL could remain in F1 next season after the retiring star held talks with F1 CEO Stefano Domenicali.

The Aston Martin driver announced plans to step away from the sport after 15 years before last month’s Hungarian Grand Prix.

After 15 years driving in F1, Vettel’s departure will leave a hole in the sportCredit: Rex

There was an outpouring of affection for the German after his retirement announcement, not least from his friend and former rival Lewis Hamilton.

But his time in the sport may not be done after fans tipped him for a leadership role within F1 after he spent years campaigning for issues like the environment.

And Domenicali also signalled that could be on the cards after he held talks with Vettel. 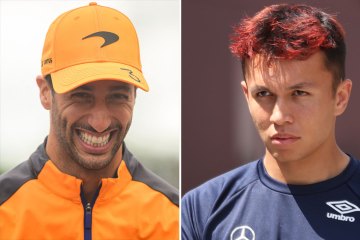 The F1 chief told Bild: “Among other things, we talked about his decision and the future. Sebastian will always be associated with Formula 1. And of course, we want that connection to remain close in the future.

“If he is interested in becoming part of our system and the approaches fit together, I would of course welcome him here.

“But we already know that, after the season, he wants to sort himself out and enjoy time with his family.”

Bild suggested that the new role could revolve around his recent activism in the areas of environmentalism, diversity and social issues.

Vettel did hint himself in his post retirement interviews that he could stay close to the sport – as well as pursuing other interests.

The 35-year-old told Sky F1: “I have lots of interests. Some are very close to racing, and maybe they will take up more room in the future, and some have nothing to do with racing.

“So the answer is it’s a little bit unknown. As even though you have these plans and so on, there’s no guarantee that they will all work and make me happy.”

It’s been a big week for F1 legends with Vettel’s long-time rival Fernando Alonso also announcing he is on the move.

The Spaniard is replacing Vettel at Aston Martin as the English constructors moved quickly to fill the void in their team.

In contrast, Alpine’s attempt to replace Alonso were completely catastrophic.