The Red Devils boss says the players must accept responsibility after a string of individual errors led to a trouncing in West London.

Ten Hag was frustrated on the touchline during the 4-0 defeat and described the performance as ‘rubbish and poor’ afterwardsCredit: Alamy

Ten Hag, 52, highlighted a lack of belief in the squad and insists they need more “quality” signings.

After the embarrassing loss, he told BeIN Sports: “It’s rubbish, and it’s poor. We need higher standards than that, that’s clear.

“We have to deliver and we didn’t. We have to change, that’s quite clear.

“35 minutes you concede four goals. It is not possible. The team has to take the responsibility. I feel really sorry for the fans. We let them down. 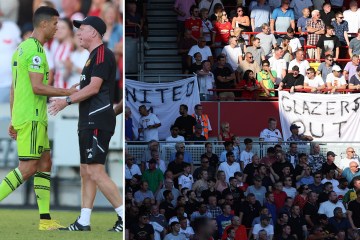 “You have to take responsibility on the pitch. As a team and as individuals, that’s what we didn’t do.

“What I asked them to do is play with belief and play with responsibility for their performance. That is what we didn’t do.”

In the tenth minute, a routine save slipped through De Gea’s hands to reward the Bees with an opener.

The Red Devils defence crumbled and defensive howlers kept coming as each of the FOUR goals added to Ten Hag’s woes.

The Dutch gaffer was asked if the current crop of players were fragile when talking to Sky Sports.

He added: “That is the truth. We have to see that and work on that. It is not only when we stick together and work hard that we overcome that. We have to believe in ourselves and as a team.

“The manager is responsible as well. He is the main responsibility and I take that, I will work on that. I will give them belief but they have to give it themselves.

“It is about individual mistakes – it is clear. It cannot happen but it did and we have to take it out.

“We need new players, quality players. We are working on that and we will do our best to convince them to come.

“In Man United we have to serve high standards but we act today.”

Odds on Ten Hag being the first Premier League manager to be sacked were drastically slashed at half time and one bookmaker even PAID OUT.