RANGERS got Ibrox rocking once again – as they produced a show-stopping comeback performance to make it into the play-off round of the Champions League.

Goals from James Tavernier, Antonio Colak and Malik Tillman ensured that Gers made a full recovery from last week’s blip in Belgium against Union Saint Gilloise.

Malik Tillman jumps for joy after scoring the winnerCredit: Reuters 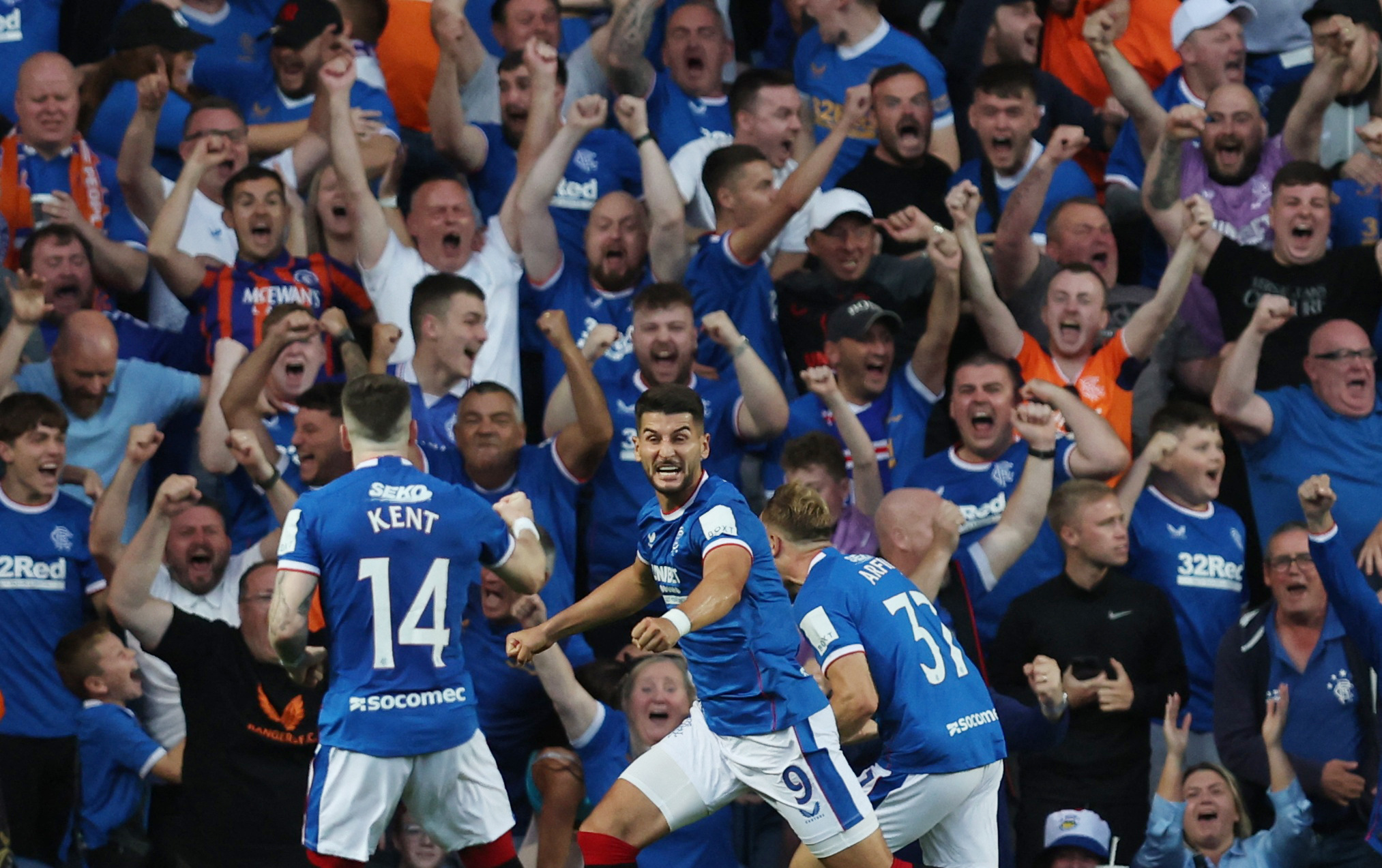 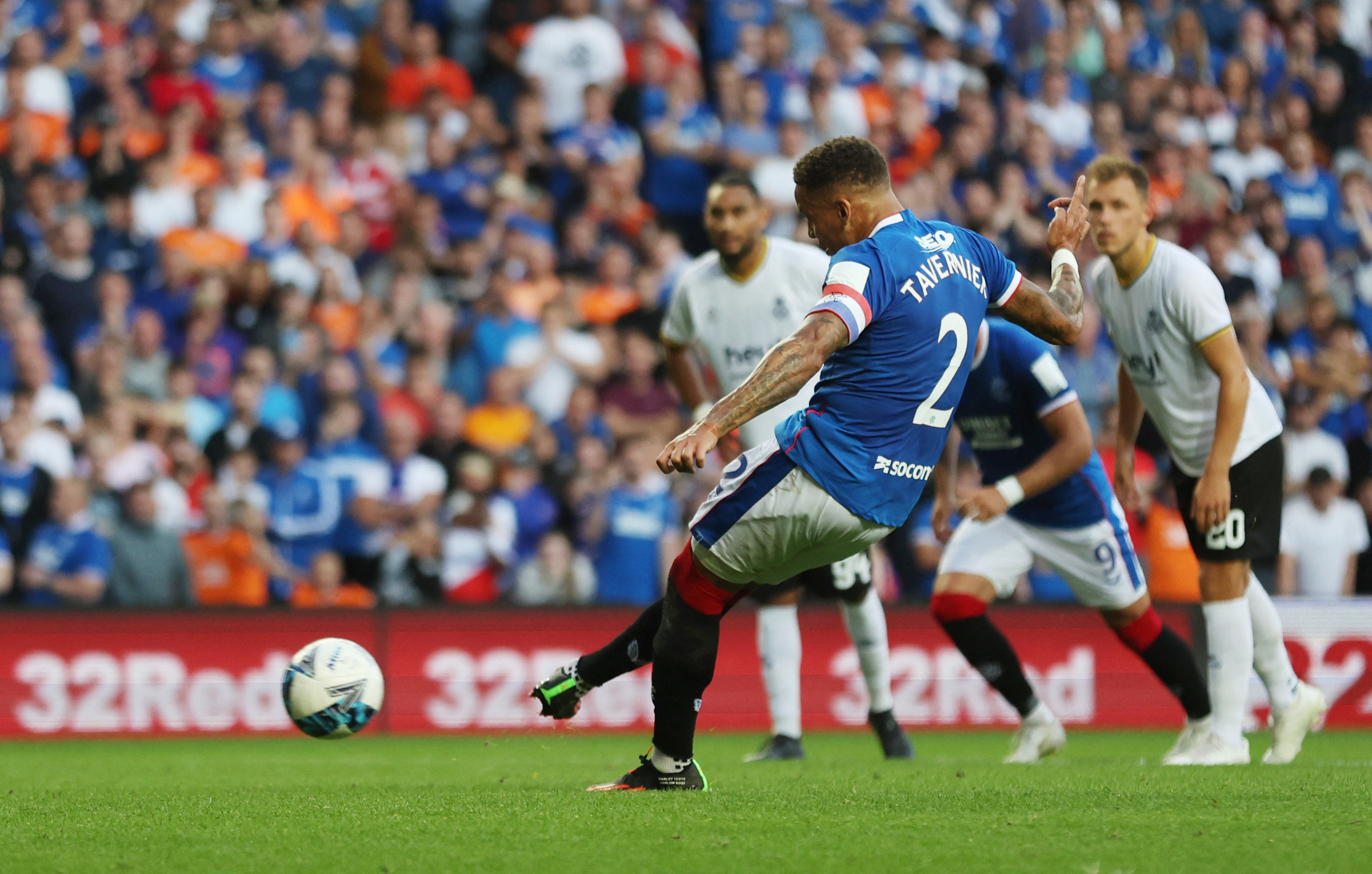 James Tavernier dispatches his penalty to open the scoringCredit: Reuters

Giovanni van Bronckhorst kept faith with Jon McLaughlin and opted against starting Alfredo Morelos, instead giving Colak another run after his opening his account for the Ibrox club at the weekend.

Tom Lawrence, Scott Arfield and the fit-again Ryan Kent came into the starting XI for the Light Blues as Glen Kamara, Ryan Jack and Rabbi Matondo made way from the previous week in Leuven.

Gers enjoyed the majority of possession in the opening third of the match.

But USG went dangerously close in the 20th minute when Siebe Van der Heyden was left completely unmarked in the box but he glanced his header wide of McLaughlin’s goal.

Colak then almost opened the scoring just before the half hour mark for the hosts with a header that forced Union goalkeeper Anthony Moris into his first save of the night.

Lawrence was a particular thorn in the side of USG, providing a constant threat with his dribbling and direct running at the Belgian defence.

He had a lovely effort fly just round the post in the 33rd minute, as a goal seemed to be just one more chance away with every attack.

As the half ticked towards a goal Rangers became a bit more sloppy in possession as they chased an opener.

And the visitors almost nicked a goal three minutes before half-time but McLaughlin and James Tavernier were able to combine to halt the progress of a neat passage of play by USG’s front line.

Within seconds, Rangers had the slice of luck they needed – and earned.

A hopeful ball in from the left side by Borna Barisic was handled by Van der Heyden and the referee wasted little time before pointing to the spot.

Up stepped Tavernier who made no mistake whatsoever to give the home side the lead at the interval.

Van Bronckhorst’s decision to keep faith with Colak and put Lawrence in from the start paid off in full for Rangers’ equaliser in the 57th minute.

The Welshman was the creator and after a cross originally found Arfield, who forced Moris into a point-blank save, Colak was on hand to nod the ball home from barely two yards out.

Ibrox was now in full voice and minutes later Tillman neatly picked out John Lundstram who forced Moris to tip a goal-bound effort out for a corner.

In the 72nd minute, Rangers’ task almost became a lot more difficult but the referee’s assistant intervened to prevent James Sands from receiving his marching orders, having won the ball in a 50-50 and originally being shown a second yellow.

Just as van Bronckhorst was preparing to throw on Morelos with just over ten minutes to go, Tillman popped up – quite literally – to outleap the goalkeeper and head home Barisic’s lofted first-time delivery for his first Rangers goal.

Simon Adingra fashioned a half-chance for USG to equalise and force extra-time in the dying embers as Rangers switched off, but his shot was eventually deflected into the hands of McLaughlin.

Jean Lazare Amani was sent off for USG well into stoppage time.