THE fans belted out God Save the King.

But despite his heroics Allan McGregor just couldn’t save Rangers.

Allan McGregor thanks Rangers fans after the final whistleCredit: Getty 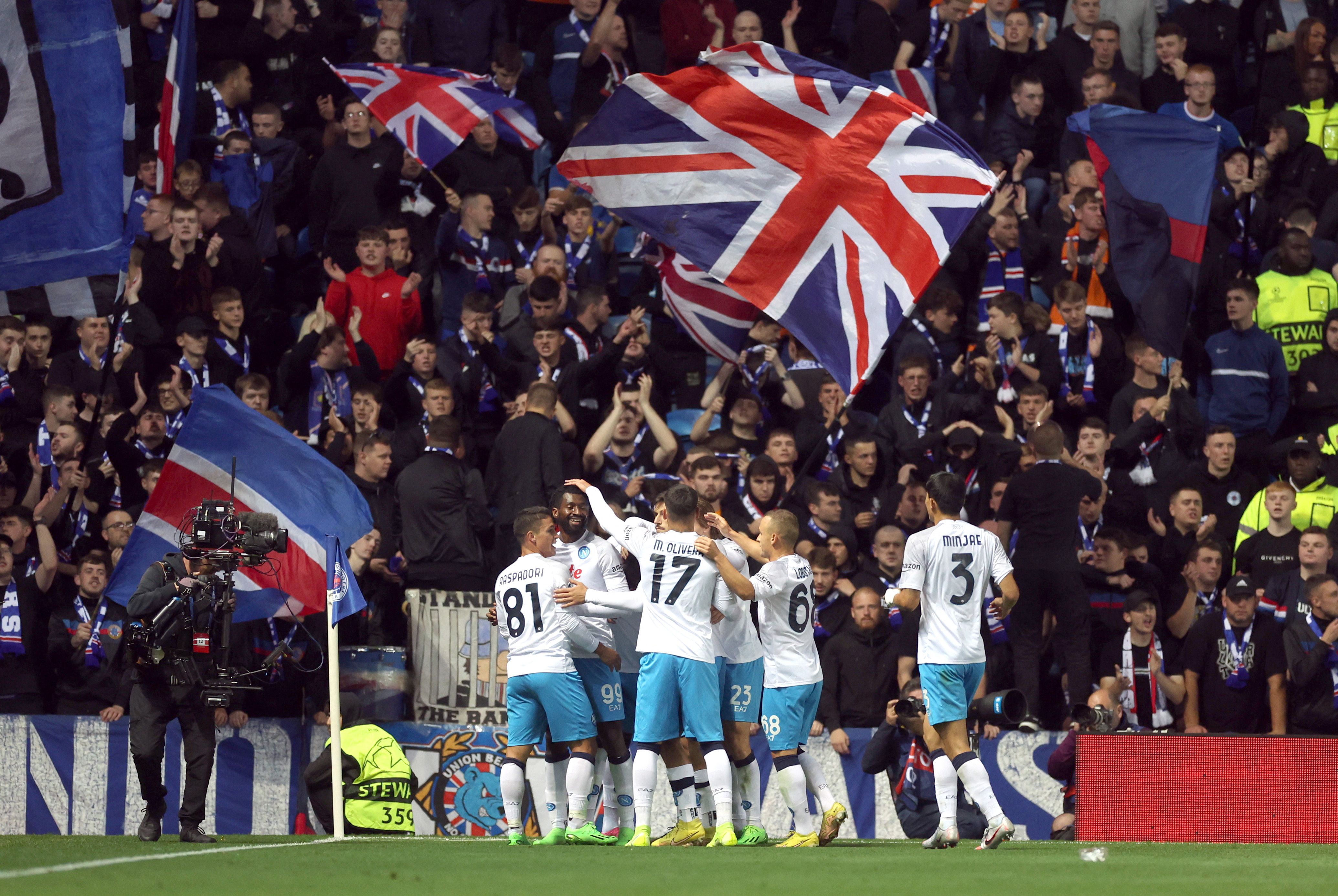 The veteran 40 year-old keeper returned to action and made TWO sensational penalty stops after the Ibrox side were reduced to ten men.

But on a night of high drama controversial Spanish referee Antonio Mate Lahoz awarded Napoli a THIRD spot-kick which they scored.

The Italian side took full advantage of the extra man with two more goals against Giovanni Van Bronckhorst’s side.

And to run salt into Rangers’ wounds the official awarded a late penalty to the Ibrox men – before changing his mind.

It was a cruel outcome for the Dutchman and his side – and McGregor in particular – on the night when he became Rangers’ oldest ever player to play in the Champions League.

Van Bronckhorst said before the game he fundamentally wouldn’t change his football philosophy. But that didn’t mean he wouldn’t tinker with it.

And who could really blame him when it came to switching from his usual back-four to a more defensive back-five?

After back-to-back 4-0 defeats to Celtic and Ajax, he had to shore things up somehow against Italy’s impressive Serie A league leaders.

It made tactical sense to drop John Lundstram in between James Tavernier and Connor Goldson to give this side more protection.

With Ryan Jack and Steven Davis deployed in defensive roles in midfield there was far more solidity to the line-up than there has been lately. Picking Alfredo Morelos was also a huge call.

Antonio Colak could argue he hasn’t done a lot wrong this season, with seven goals to his name already.

But the truth is the Croatian striker hardly got a kick in the Old Firm game or in the Amsterdam Arena.

If Rangers were going to cause Napoli any problems they needed Morelos’ muscle and physicality.

The question was whether or not he’d be match sharp enough when it mattered in front of goal.

This was the Colombian’s first start of the season with his manager questioning his commitment to getting fully fit just a few weeks ago.

Morelos has clearly grafted his way back into Van Bronckhorst’s plans and regained his trust.

But it’s still going to take him time to get back to the player the club’s supporters know and love.

He had a great chance to score inside the first minute when he was picked out inside the Napoli six-yard box by a wonderful cross from Tavernier.

It was the type of opportunity he usually makes the most of, as the club’s record European goalscorer.

But with the crowd on its feet expecting him to hit the net he unfortunately glanced his header wide of the target.

Morelos appeared to get his timing all wrong as he jumped for the ball and you had to put that down to his lack of game-time recently.

It was the same with another chance just seconds before the end of the first-half. Scott Arfield did brilliantly to take the ball out of the sky and lay it back to Morelos with a lovely cushioned touch.

But this time his team-mate swiped at the ball and missed it altogether.

In all fairness, though, in between those two big moments for Rangers, Napoli were terrific throughout the first 45 minutes.

Polish attacker Piotr Zieliński – wearing No20 – was a constant threat whenever he got on the ball.

The same with 21 year-old Georgian superstar Khvicha Kvaratskhelia, wearing No77.

Zieliński rattled Allan McGregor’s post early on before setting up Giovanni Simeone with another chance which brought a good save from the recalled Ibrox goalkeeper.

Rangers fans also had their hearts in their mouths two or three times before the interval with terrific cross balls fired across goal.

The best one came from Zieliński which forced Goldson into some sensational last-gasp defending right under his own crossbar.

Van Bronckhorst had to be delighted with how his side were competing ahead of the second-half.

Napoli had their moments. But so did Rangers.

Just like at the start of the first-half, Rangers had a brilliant chance to score right at the beginning of the second.

Arfield just couldn’t sort his feet out quickly enough after Tavenier headed the ball down to him with his shot flying wide.

Soon at the other end McGregor was beating away a decent effort from Kvaratskhelia before Goldson flashed a header wide. But the high drama was on its way.

In 57 minutes Napoli hit Rangers on the break with Simeone racing through on goal before going down inside the box under a challenge from Sands.

The defender – who had only been booked moments earlier – was shown a second yellow card and then a red with Napoli awarded a penalty.

Up stepped Zielinski with McGregor diving to his right to made a stunning save – only for Matteo Politano to slam home the rebound.

VAR spotted he’d run into the box before the spot-kick was taken and the goal was disallowed.

But cruelly it meant Zielinski had another go at beating McGregor from 12 yards. Incredibly the veteran goalkeeper made ANOTHER save as Ibrox erupted.

Almost unbelievably, though, Napoli would get a third penalty within just ten minutes with Borna Barisic penalised for handball inside the box. This time there was nothing McGregor could do.

Politano took responsibility this time and the Rangers goalie guessed correctly again, but just couldn’t keep it out.

It was heartbreaking for Rangers and McGregor in particular and with ten men the task became too much.

In 84 minutes Napoli made it 2-0 with Giacomo Raspadori firing into the net from outside the box before Tanguy Ndombele added a third.

Even then Rangers never gave up and Lahore awarded the home side a penalty for handball in stoppage time. Only to look at the VAR monitor and overturn his decision.