MICHAEL Carrick denied there had been any input by new interim coach Ralf Rangnick into the side he put out at Chelsea on Sunday.

In truth, despite the surprise decision to bench Cristiano Ronaldo in favour of a front three of Marcus Rashford, Jadon Sancho and – as a false nine – Bruno Fernandes, that seemed very much the case. 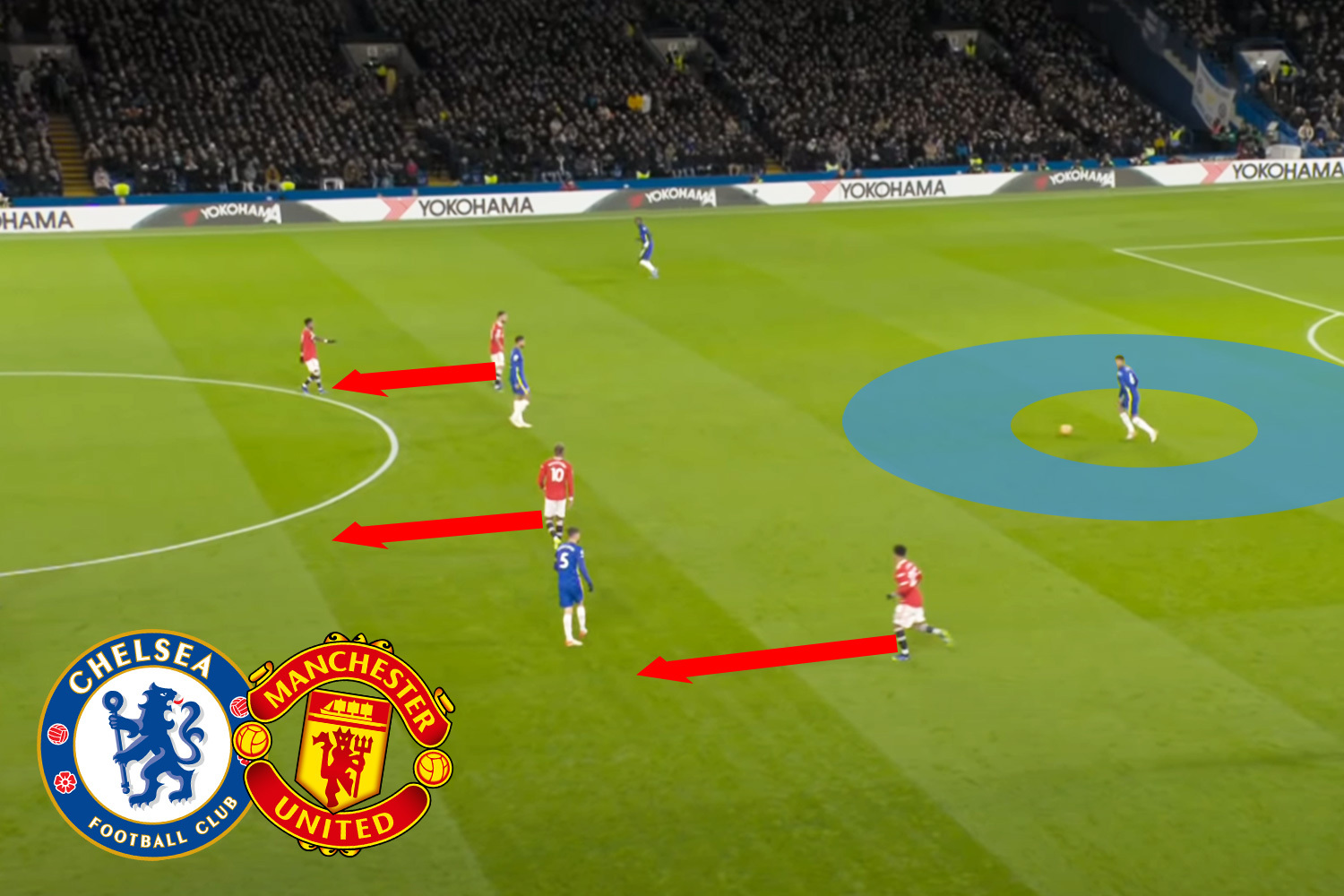 Manchester United dropped off to allow Chelsea possession on Sunday

United dropped off to allow Chelsea domination of possession and despite cashing in on Jorginho’s blunder to go ahead, were hanging on for a draw at the end of the game.

Whether the German will be able to have an immediate effect for Thursday’s game with Arsenal at Old Trafford is also unclear.

United hope to get Rangnick’s visa processed swiftly but it still means a maximum of two full training sessions ahead of the match.

But what United fans can expect is a radical change in approach – and a signal that Rangnick’s side will be much more similar to protege Jurgen Klopp’s Liverpool than some of the stuff they have been served up with under Ole Gunnar Solskjaer.

That will probably mean the sort of aggressive high press Liverpool have used with less frequency in the past two seasons, although it is something that is still in the Anfield locker. 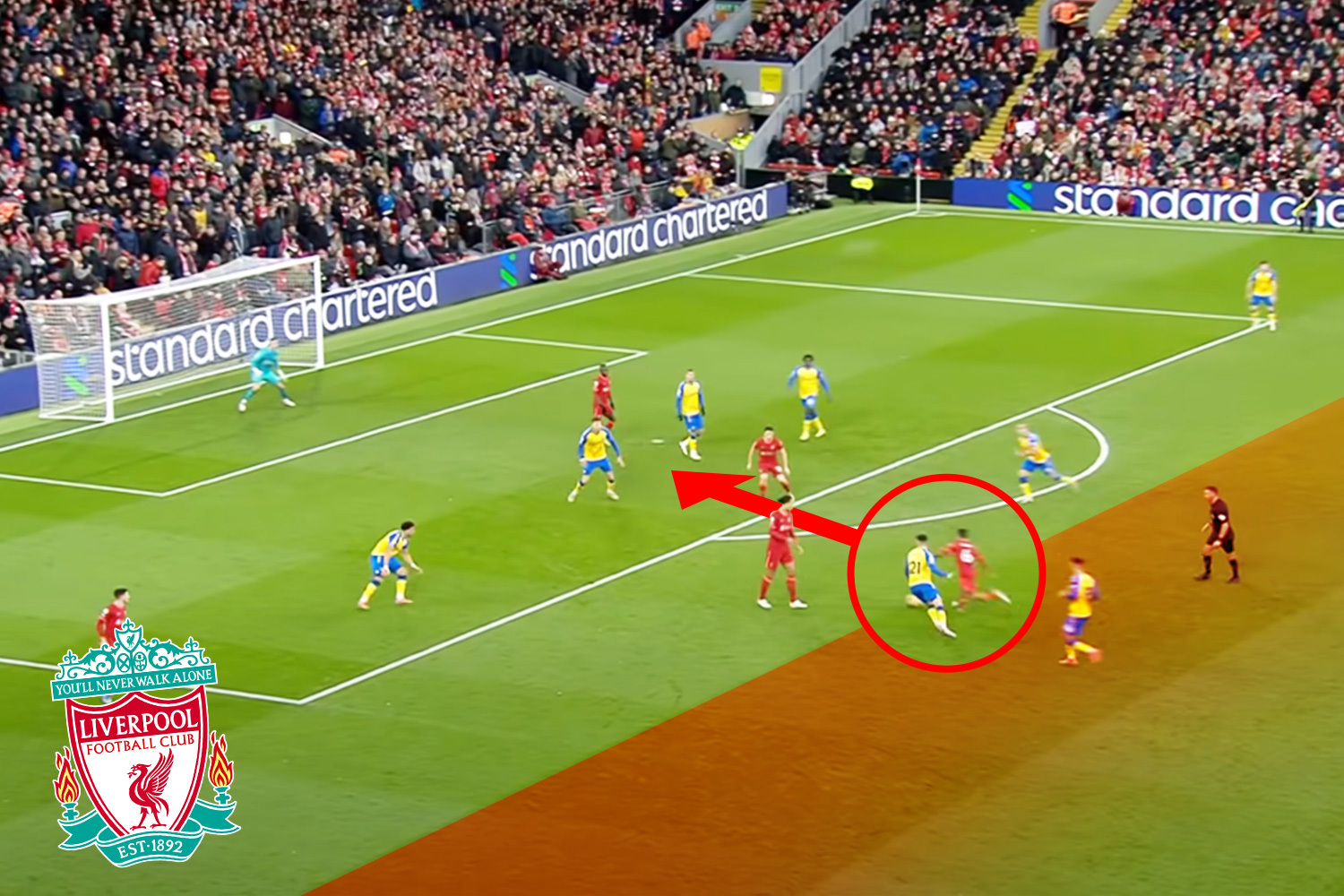 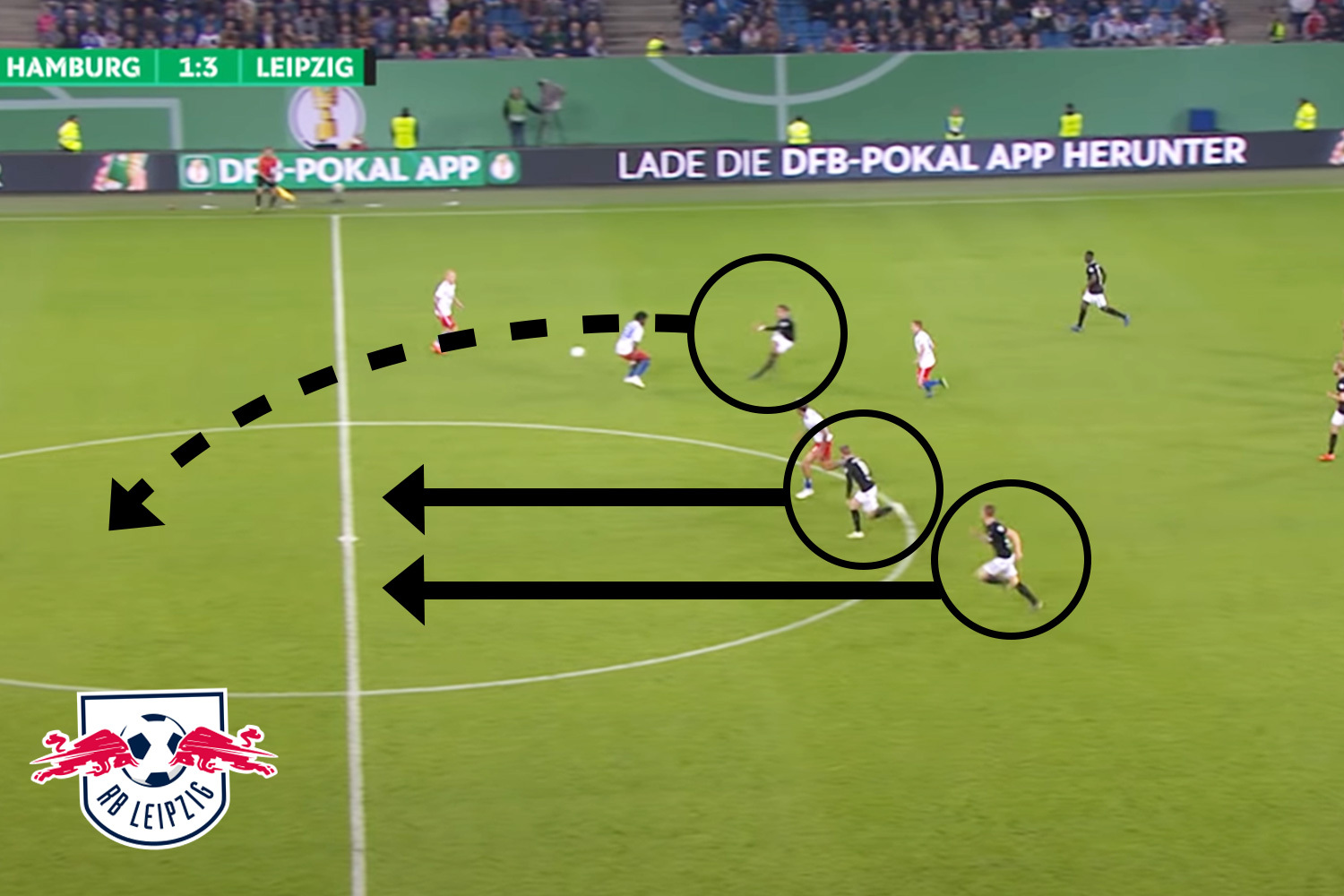 Rangnick has always believed that winning the ball back early is a critical element in the game-plan, that forcing errors and turnovers high up the pitch increases the opportunity for chances and goals.

That means, too, numbers up in support – normally from a basic 4-4-2 formation – when the ball is won back.

You won’t have too many loiterers in a Rangnick team, especially in midfield.

What that might mean for Ronaldo, at 36, or Paul Pogba long-term will certainly be interesting to see.

If the message gets through on Thursday, you can expect to see Rashford and whoever operates with him to put Arsenal’s central defenders Gabriel and Ben White under far more pressure.

But Rangnick’s sides in Germany, Hoffenheim and Leipzig in particular, tended to operate with “inverted wingers” – nominally wide players who operated in more narrow areas behind the front duo – to help both the press and the intensity. 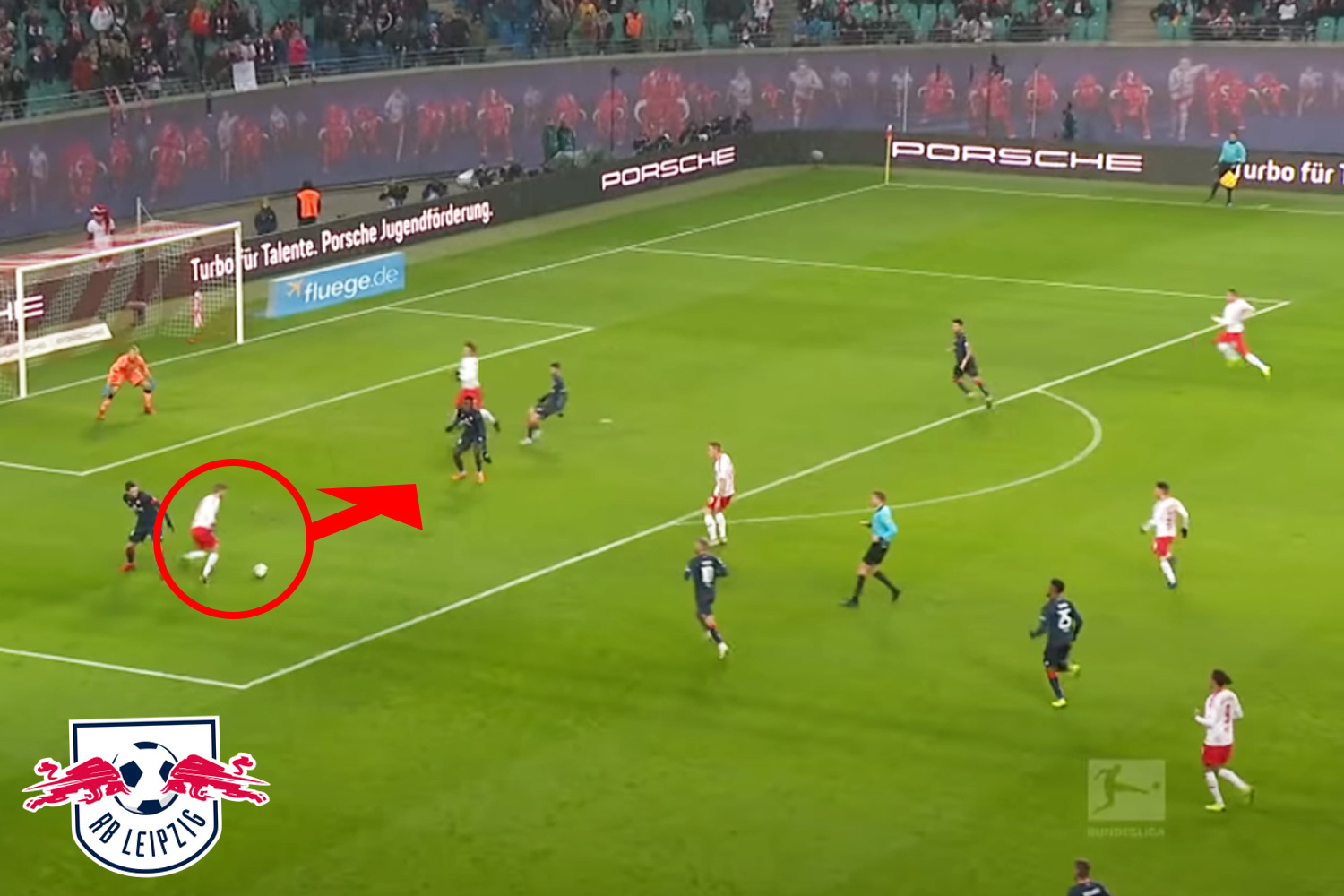 Timo Werner was expert at cutting inside under Rangnick at Leipzig 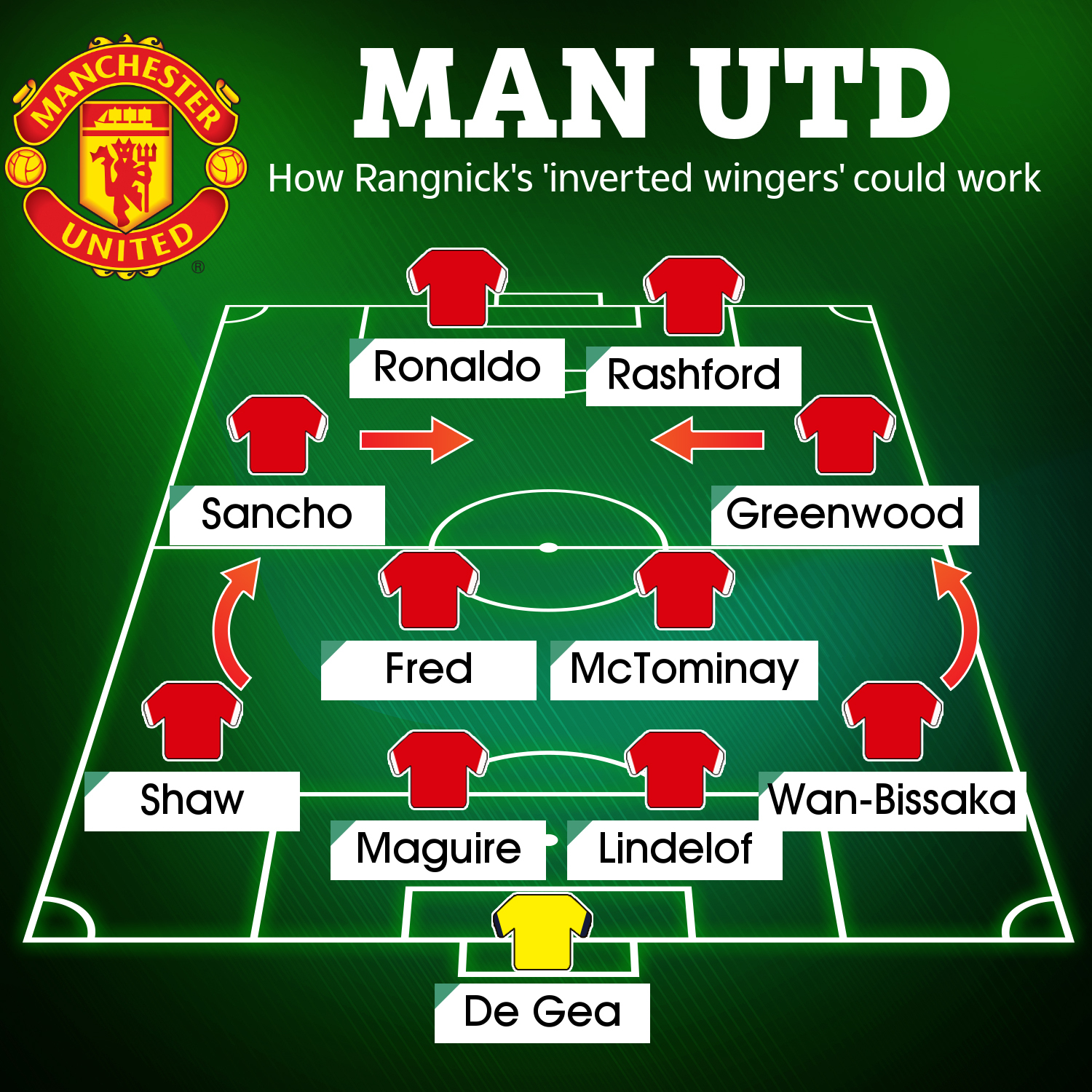 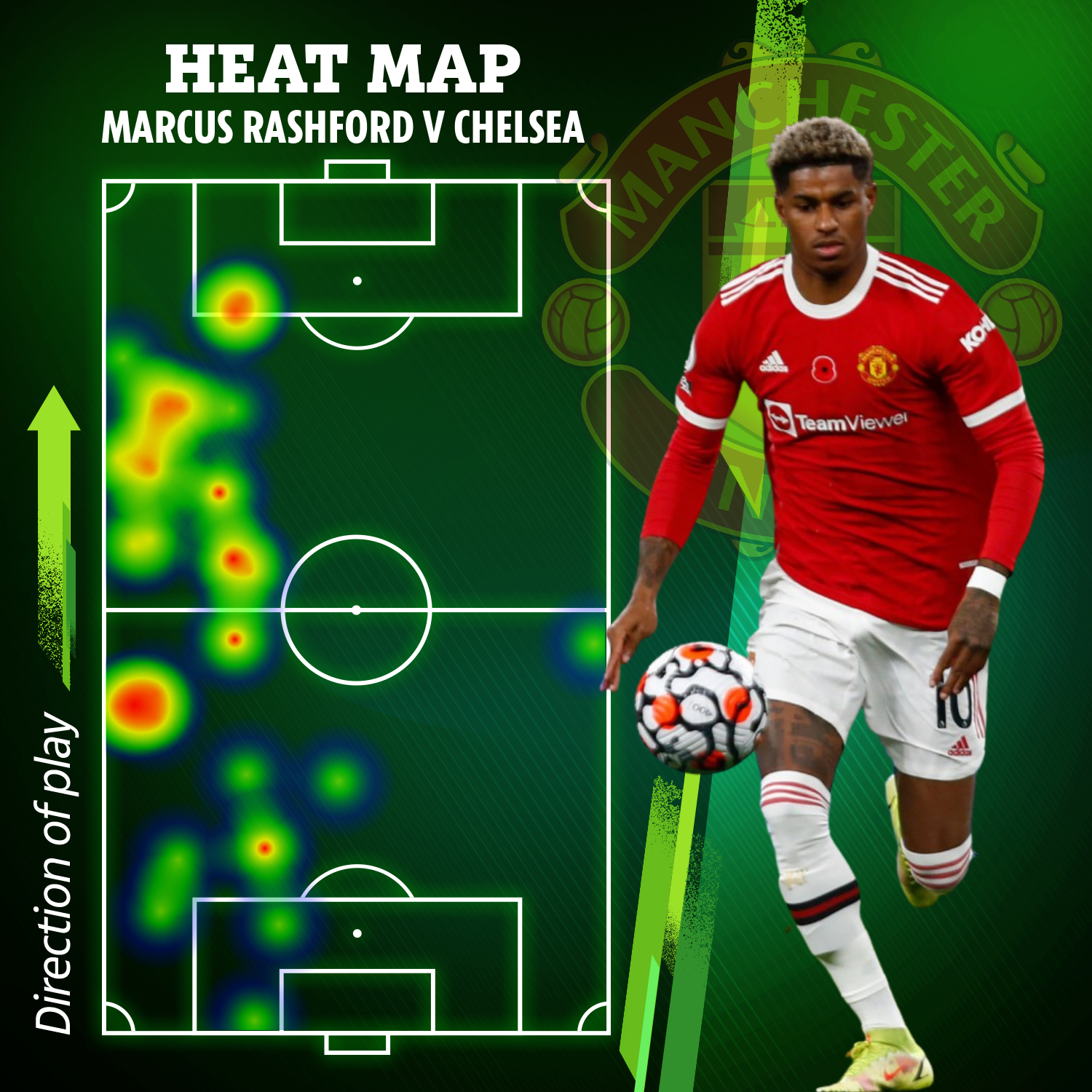 Marcus Rashford would find himself deployed more centrally under the German

If that is how United play, Rangnick will instruct Sancho and, potentially, Mason Greenwood, to prevent Arsenal playing short to Thomas Partey and Albert Lokonga.

At the same time, the United full-backs will stay wide, seeking to prevent Emile Smith Rowe and Bukayo Saka being the Gunners’ “out-balls” although it will see the Arsenal full-backs as the easy passing option.

Rangnick is not set in his shape, so can operate with just one striker and an extra man in the second line of the pressing “trap”.

But what United players and fans alike can anticipate is that expectation of extra effort and intensity from the outset.

Rangnick wants to force opponents into playing difficult passes into crowded areas, to manufacture an early – and potentially flawed – decision.

Pushing his own full-backs into more advanced roles squeezes the space as well, adding to the sense of a blanket of shirts suffocating opponents as they attempts to play out.

And while the press is about winning the ball, Rangnick is equally keen to see won possession utilised at speed as well.

In the Bundesliga, Rangnick ordered his teams to try to capitalise on regained possession by playing forward rather than square and to create shooting opportunities within just 10 seconds of getting possession.

So no more passing for the sake of passing while winning the ball back merely to have possession would go counter to everything the new interim boss will preach. 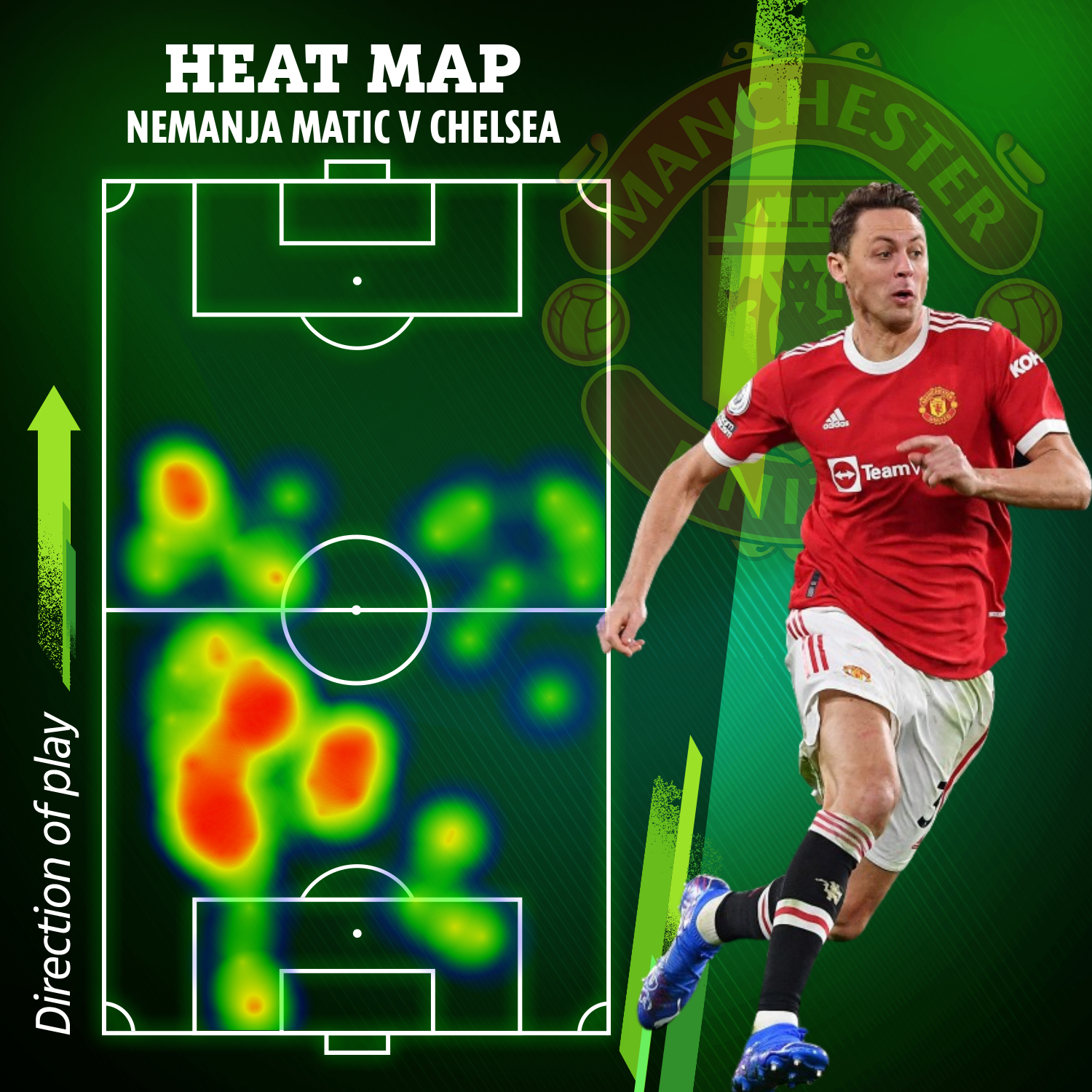 If there is an impact on Thursday, that will be clear from the amount of attempts at goal, balls played to Rashford in particular – or Ronaldo if he is utilised in a central role – with the wide players expected to race up in support and run in behind, operating in a much more narrow shape.

With his own full-backs pushing on, there will be an onus for the midfielder holders – likely to be two from Fred, Namanja Matic and Scott McTominay – to fill the void behind them.

That will see them having to move into defensive roles out wide on occasion and might be among the biggest changes for the players to take on board.

It does have plenty of risk and jeopardy, especially given the limited time to work on the training ground over the next few weeks with the relentless programme of games in December.

The other issue, as Rangnick’s role with the first team is only supposed to run for six months, is whether the players are ready to buy into the approach and sacrifice themselves physically. 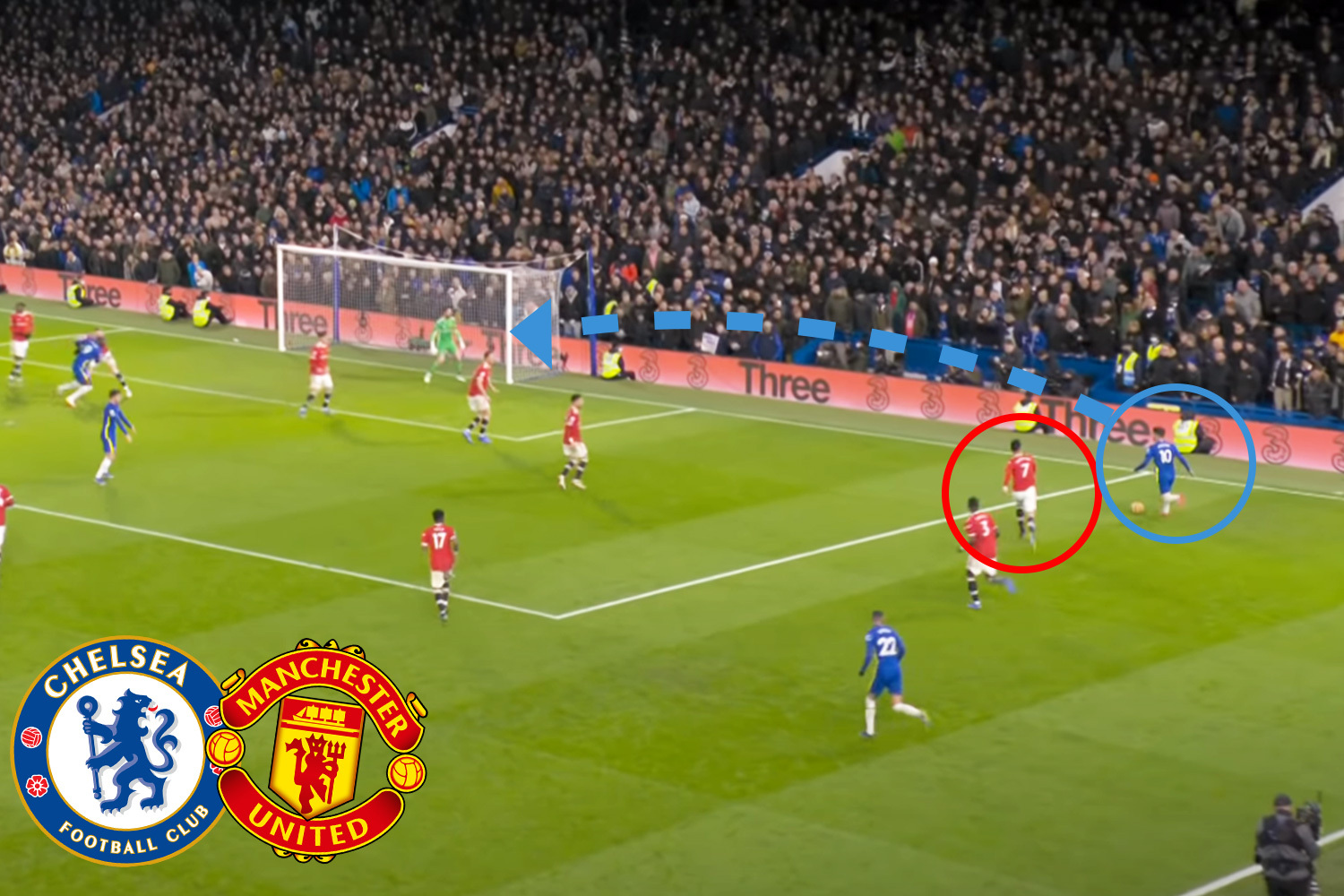 There will no longer be the classic Mourinho-style “low block”, which gives players the chance to rest in games.

Instead, high energy football will be demanded – arguably more in keeping with United standards and traditions.

It requires fitness, freshness and hunger from players, an approach that many Old Trafford fans have been crying out for.

But it is not unreasonable to suspect that such a sea-change will take weeks at least, if not months, to be fully immersed into a squad.

Expecting it all to change on Thursday would be somewhat unfair. The United supporters, though, will be looking for the first signs of a new cast of mind.