If Harry Kane really is making his Tottenham swansong at the King Power Stadium, he will have wished it could come with stakes rather higher than a fraught battle to cling on to seventh place. The emotions will be inescapable and the motivation to provide one last star turn presumably huge. Winning at such a difficult venue would be bittersweet for Kane and Spurs, given how costly the collapse of their away form has been to their campaign, with only two wins in their last nine. Such an outcome would also be deeply frustrating for Leicester, who are still in with a credible shout of Champions League qualification given Chelsea face a tricky assignment at Aston Villa. Kane and company may sense vulnerability with the Foxes emerging from two intense, draining face-offs against Thomas Tuchel’s side, but even a win will not clear the clouds of uncertainty over the club as summer approaches. NA

It may not be the bauble they were hoping to pick up on the final day, but Harry Kane and Mohamed Salah will both still be keen to claim the Premier League Golden Boot. The Spurs and Liverpool forwards are level on 22 goals, with Man Utd’s Bruno Fernandes four goals back on 18.

Thank you for your feedback.

2) A fond Etihad farewell for Agüero

With their excellent record of 11 wins and four draws in 17 games on the road this season, it’s not beyond the realms of possibility that Europe-chasing Everton could poop Manchester City’s title coronation party. Whatever the outcome on Sunday, the enthusiasm of the 10,000 fans allowed in to see their team lift the Premier League trophy will not be dimmed. Fitness permitting, the game will mark Sergio Agüero’s final home appearance for Manchester City and Pep Guardiola is hopeful the Argentinian will have recovered sufficiently from an adductor strain to make an appearance. Whether he plays or not, after 10 years and 258 City goals he is guaranteed an emotional send-off. We can but hope Noel Gallagher doesn’t rock up at the Etihad Stadium in a bid to steal his thunder. BG

Of the three teams vying for the last two Champions League spots, Chelsea have the toughest assignment on the final day. On the flip side, they are also the only side with a fall-back option, since they could still qualify for next season’s tournament by winning this year’s edition. N’Golo Kanté will be central to their attempt to beat Manchester City in the final, so Thomas Tuchel must think carefully about whether to risk him on Sunday against Aston Villa, just five days after he was forced off by hamstring concerns against Leicester. Villa were energetic and robust in their midweek win at Tottenham and with Jack Grealish back in the groove and home fans back in the stands, Dean Smith’s men will make Chelsea fight for anything they can get. PD

Arsenal are threatening to mock those who claimed, a mere three weeks ago, that their hopes of playing European football next season had gone up in smoke. They have a good chance of securing seventh place and a Europa Conference League berth if they beat Brighton on Sunday, but spending Thursdays in the continent’s new third-tier competition would scupper any hopes of clearing the midweek diary for a Liverpool-style resurgence. Perhaps that need not be such an issue. A league table for the Premier League’s last 23 rounds would put Arsenal second only to Manchester City, suggesting the club’s comeback may be quietly under way after all – even if it has not always felt that way. Winning a fifth straight league game may or may not book them a ticket to some of football’s less celebrated citadels, but it would certainly strengthen the argument that Mikel Arteta’s side are gathering momentum for next season. NA

Timing is everything. Liverpool seem to have got their act together at exactly the right moment to salvage some success from a miserable season, even if their central defence still looks brittle. Barring a huge Leicester win over Spurs, victory at home against Crystal Palace will be enough for Liverpool to secure a top-four finish. Then again, winning at home against lowly teams adept at sitting deep and striking on the counter is exactly the sort of task that Jürgen Klopp’s team have bungled throughout the campaign. Former Liverpool forward Christian Benteke has gone on a sudden goal spree with Palace, scoring four in his last four matches. Another unloved figure at Anfield, Roy Hodgson, is taking charge of his final game as a manager. He could be forgiven, even acclaimed, if he masterminded one last win, flipping metaphorical Vs at supporters who never loved him and stalling Liverpool’s top-four charge at the last. PD 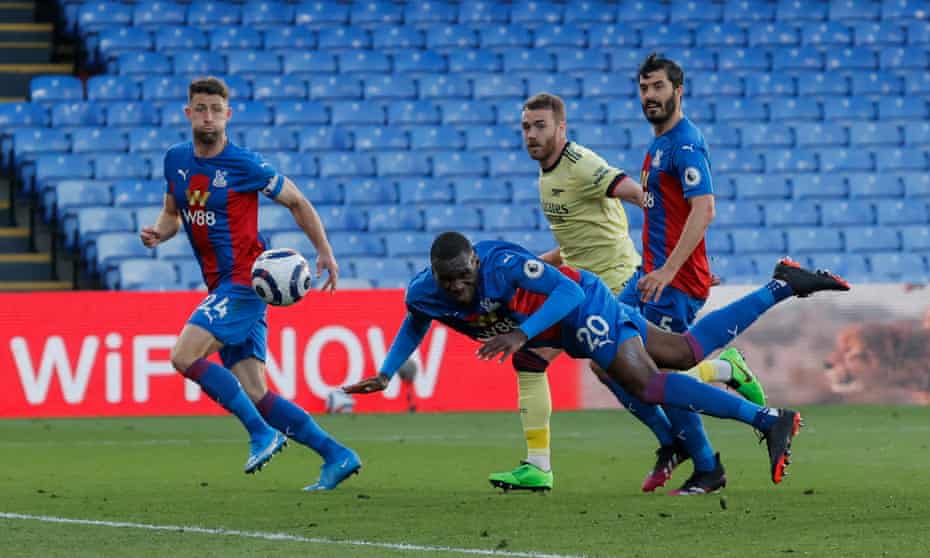 After winning at West Brom, a single point at home to Southampton will be enough for West Ham to nab this season’s final Europa League qualifying spot. Should they get the required result, the good news is they will go straight into the group stages of the competition, avoiding a repeat of the double humiliation in 2016 and 2017, when they were twice eliminated in the qualifying rounds by their unlikely Romanian bogey team, Astra Giurgiu. Should West Ham find themselves comfortably leading with a few minutes to go, arguably the most gripping entertainment at Sunday teatime will be the unseemly scramble between Tottenham, Everton and Arsenal to avoid seventh place and a spot in the Europa Conference League. BG

At one point, Fulham against Newcastle on the final day seemed destined to be a relegation showdown. It will be nothing like that and, ignoring the hosts’ rotten form, the comfort with which Steve Bruce’s side finish the season owes plenty to the loan addition of Joe Willock. He seeks a seventh goal in as many games on Sunday and will have a tough decision to make regarding his future afterwards. Does he carry this good feeling back into pre-season at Arsenal and have a crack at cementing a regular berth at his boyhood club? There would certainly be a sense of unfinished business if he left Newcastle now: sometimes a player and club just fit. As long as all parties can agree a deal, it would appear cannier to stay in the north-east for now, and continue to shine in an environment that clearly suits him. Another year of this form would send Willock’s stature soaring. NA

Three days before getting the opportunity to win his first trophy as Manchester United manager, Ole Gunnar Solskjær risks exposing his most influential players to potential injury at Molineux. It’s unlikely he will take that chance, despite the prospect of completing an unbeaten away record for the Premier League season and regaining a winning feeling after picking up one point from their last three matches. Solskjær’s selection at centre-back on Sunday will be particularly interesting, bearing in mind either Eric Bailly or Axel Tuanzebe is likely to play in the Europa League final if Harry Maguire does not recover from injury in time. Does Solskjær need to see one of them in action one last time alongside Victor Lindelöf before deciding? Will he play them both on Sunday to preserve Lindelöf, at least? Either way, do Wolves have a fit forward capable of providing a worthwhile test? PD 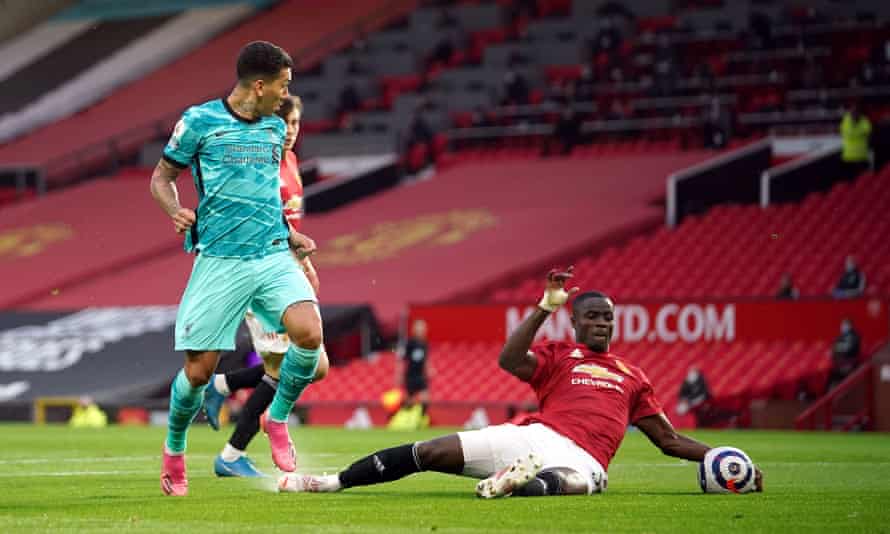 Eric Bailly could feature in the Europa League final for Manchester United if Harry Maguire does not recover from injury. Photograph: Dave Thompson/PA

9) Could Dyche be tempted to south London?

Sean Dyche was typically non-committal about his future when talking before Burnley’s defeat to Liverpool on Wednesday but claimed to be flattered by speculation linking him with a move to Crystal Palace, where he is among the bookies’ favourites to succeed Roy Hodgson. Dyche has a year left on his contract with Burnley, who have made no secret of their desire to keep him at Turf Moor with promises of overdue support in the transfer market. Still, if Palace’s interest is real, it would be no surprise to see him leave Turf Moor. With as many as 16 Palace players out of contract in June, the prospect of a change of scenery and a blank canvas to work on might prove a temptation too far. BG

10) Big Sam bows out against Bielsa

In what might prove to be his last gig as a Premier League manager, Sam Allardyce finally broke free of his mould, leading a highly entertaining, incorrigibly hapless outfit to relegation. At Elland Road his team will no doubt aim to go out with all guns blazing, and will probably shoot themselves in the foot a few times. Marcelo Bielsa, meanwhile, could enhance his manager of the season credentials by inspiring a win that could realistically lift Leeds to an eighth-place finish in their first season back in the top flight. No one has defied gloomy pre-season expectations more than Patrick Bamford, for whom another top performance might just persuade Gareth Southgate to bring him to the Euros. PD