NOTTINGHAM FOREST have confirmed the appointment of Filippo Giraldi as sporting director ahead of a major reshuffle at the struggling Premier League club.

The newly promoted side are sat rock bottom of the table after eight games.

Giraldi has joined Forest as their new sporting directorCredit: Getty

And owner Evangelos Marinakis is keen to take drastic action with manager Steve Cooper, CEO Dane Murphy and recruitment chiefs George Syrianos and Andy Scott all at threat of losing their jobs.

The first move of the reshuffle has been to bring ex-Watford technical director Giraldi to the club.

Giraldi’s nine-year spell at Watford came to an end at the end of 2020 following the club’s relegation from the Prem in the previous season. 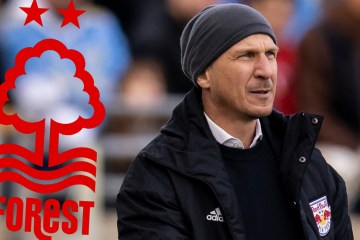 The Italian will take up the role as sporting director at Forest.

He could have a new manager to work with soon.

Struber, 45, worked as a coach at the Red Bull Salzburg academy before impressing at Barnsley in the 2019/20 campaign during an 11-month stint that saw him help them to Championship survival.

He has been in charge of MLS outfit NY Red Bulls since October 2020.

And he is also highly-rated by former Manchester United interim Ralf Rangnick.

Struber turned down the chance to be an assistant under Rangnick at Old Trafford back in December in favour of staying in the United States.

But Struber remains a huge fan of English football and is determined to work there again in the near future.

Alongside Struber, ex-Liverpool, Newcastle and Everton manager Rafa Benitez is in the frame to get the job should it become available.