Second-division games in Malaysia don’t make many international headlines but that changed in March when the Myanmar under-23 winger Hein Htet Aung gave a three-fingered salute after scoring for Selangor II. Popularised by The Hunger Games film franchise, this gesture of resistance was adopted by pro-democracy protesters in Thailand and Hong Kong in 2014 and then by Myanmar, after the military took back power in a coup on 1 February.

Before Myanmar’s 2022 World Cup qualifier against Japan last Friday, the goalkeeper Kyaw Zin Htet had called for players to copy Hein’s handiwork. “It would be good if some of them came out and gave the three-fingered salute to an international audience,” the 31-year-old told AFP.

There weren’t many opportunities for the national team to follow in Hein’s footsteps during the game as a ruthless Japan won 10-0 to inflict Myanmar’s biggest defeat. The only protests seen and heard came outside the stadium from a few dozen Myanmar residents in Tokyo. There are, though, more chances to grab headlines in Japan (where all the group’s games are being held to reduce travel) against Kyrgyzstan and Tajikistan on 11 and 15 June respectively.

There were mitigating circumstances regarding the size of Friday’s loss. Kyaw, an experienced goalkeeper, did not go to Japan, one of many mainstays who refused the call from the head coach, Antoine Hey, a development that delayed the team’s departure by a week. Kyaw made clear on 13 February during a protest with other footballers in Yangon that he was not going to represent the nation under the regime headed by Gen Min Aung Hlaing.

“If the entire group of players had opted out, it would have had an impact,” said Kyaw. “Younger players are also being threatened on their future if they choose not to play the game, so they might be worried about it.” The Myanmar Football Federation said on its website that players who refused could be suspended.

Prominent figures have been put under pressure. In April, the junta stepped up a campaign against celebrity protest supporters – some of whom have been imprisoned – by publishing a list of their names in state media and warning broadcasters and agencies against working with them.

According to the human rights group the Assistance Association for Political Prisoners, as of 1 June 841 people had been “confirmed killed by this junta coup”. Chit Bo Bo Nyein, the Paul Pogba-loving captain of the under-21 team of Hantharwady United, one of Myanmar’s leading clubs, was shot and killed on 27 March, a day when 150 were reported to have died in protests. 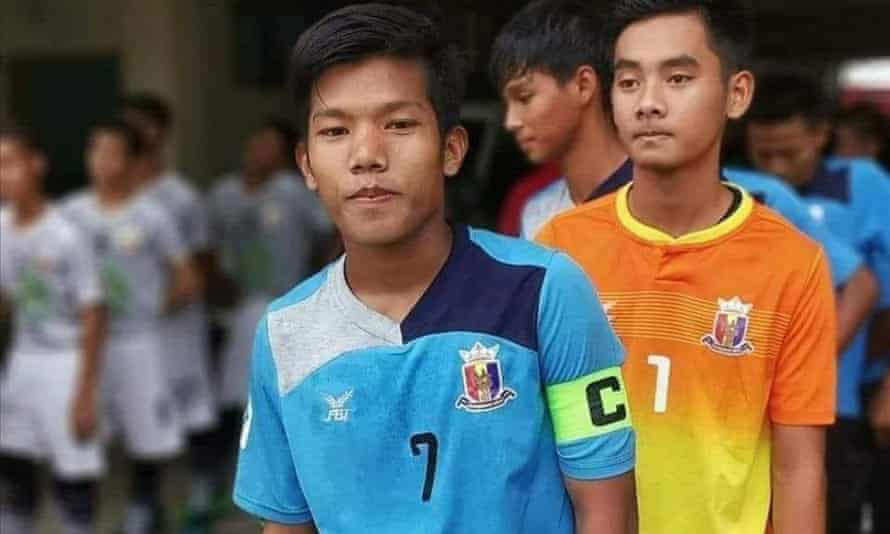 Hey, the German is in his second spell as head coach, is trying not to get drawn into the issue. He told the Guardian that he respected the players’ decisions but that football owed it to future generations to continue. After the heavy defeat by Japan he said: “We are concentrating on our job, on our team, on our players; we are not taking any political stand or side,” Hey said. “We just do what we are here for – playing football as good as we possibly can.”

Club football has ground to a halt in Myanmar, which rarely features in the south-east Asian summer itineraries of European club giants. Hantharwady and Shan United recently withdrew from Asian club competitions and federation officials say many players have returned to their home provinces and some are undergoing military training to learn how to fight back.

Sign up to The Recap, our weekly email of editors’ picks.

The 2022 World Cup would be out of the question even if Myanmar had all their players available but with the road to Qatar doubling as the route to the 2023 Asian Cup in China, there is a chance of making it to the continental tournament for the first time since 1968. It has been a while since Myanmar were a force even in south-east Asia, with Thailand, Singapore, Malaysia and, these days, Vietnam leading the way. There had been promising signs. The talent that has always been there has started to move overseas in increasing numbers and when the Under-20 team qualified for the 2015 World Cup, the people took to the streets to celebrate. It feels like a long time ago now.