JOSE MOURINHO launched a scathing attack on Ole Gunnar Solskjaer as the pair clashed in the tunnel after the final whistle.

The Tottenham chief was furious after Solskjaer accused Son Heung-min of conning officials to get Edinson Cavani’s strike chalked off by going down too easily under a flailing arm from Scott McTominay. 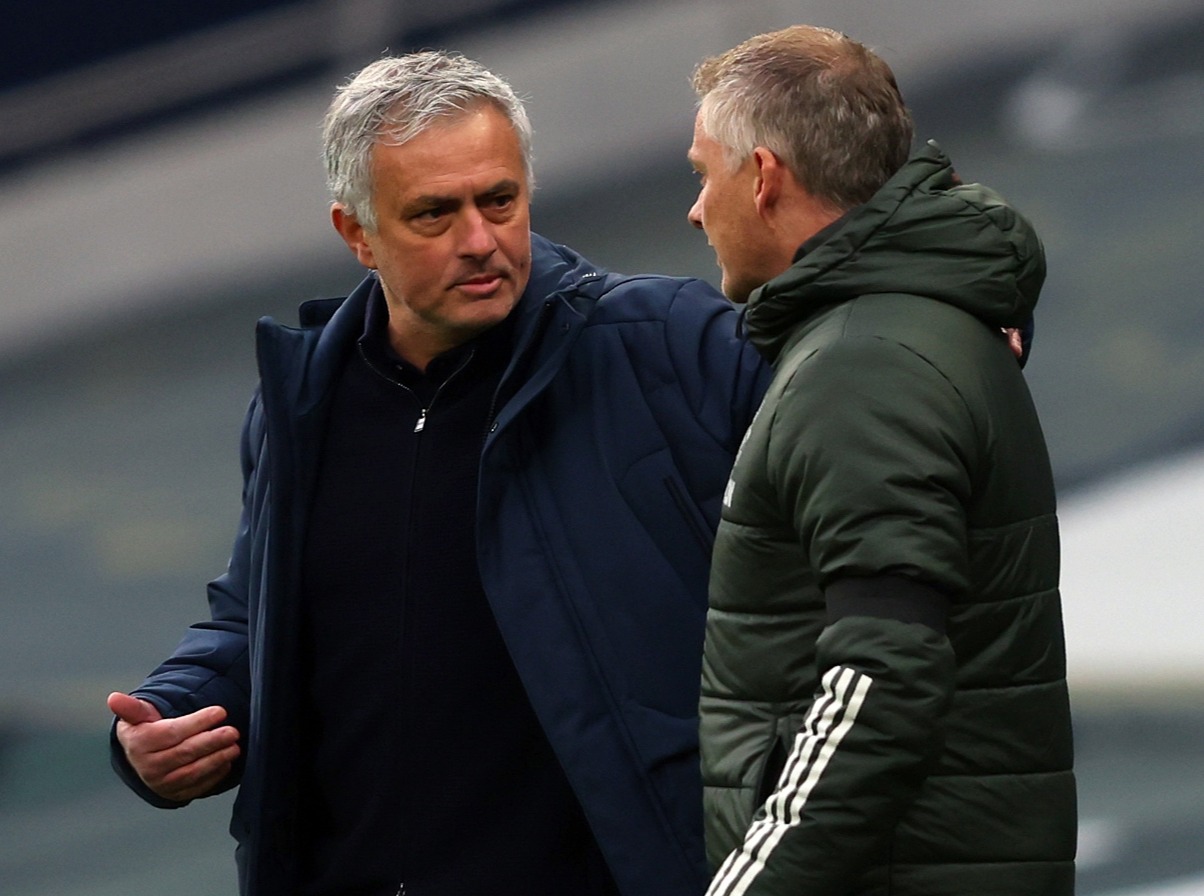 Mourinho and Solskjaer broke outinto a war of words after Man Utd’s 3-1 win at TottenhamCredit: Getty 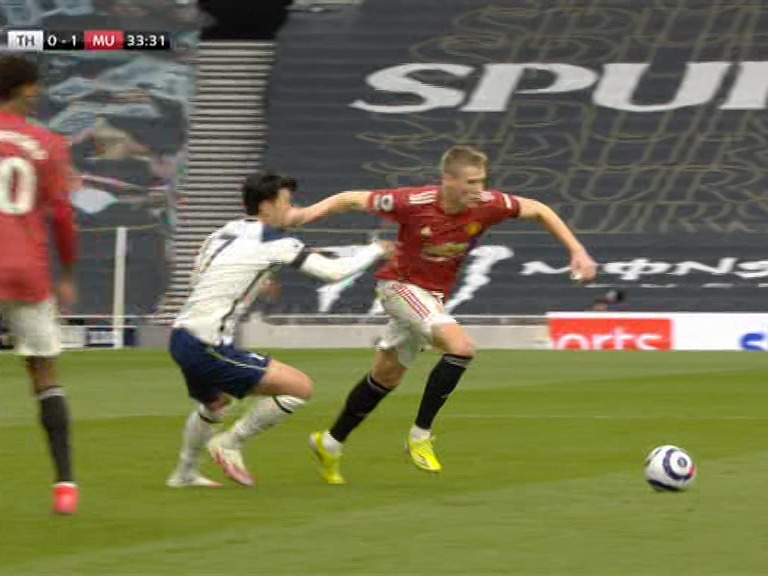 Seething Solskjaer said: “If my son stayed down for three minutes and he needed ten mates to help him up, he wouldn’t get any food.

“The game has gone — absolutely gone.”

But former United boss Mourinho hit back as the row escalated when he told reporters: “I just want to say Sonny’s very lucky that his father is a better person than Ole.”

Cavani thought he had given United the lead when he slotted home in the 33rd minute.

But referee Chris Kavanagh ruled it out after VAR advised him to check the pitchside monitor.

It looked a harsh decision and the Red Devils were further incensed when the South Korean fired Spurs ahead seven minutes later.

The Norwegian said in a television interview moments after the final whistle: “It was a perfectly good goal. We weren’t conned, the referee was.” 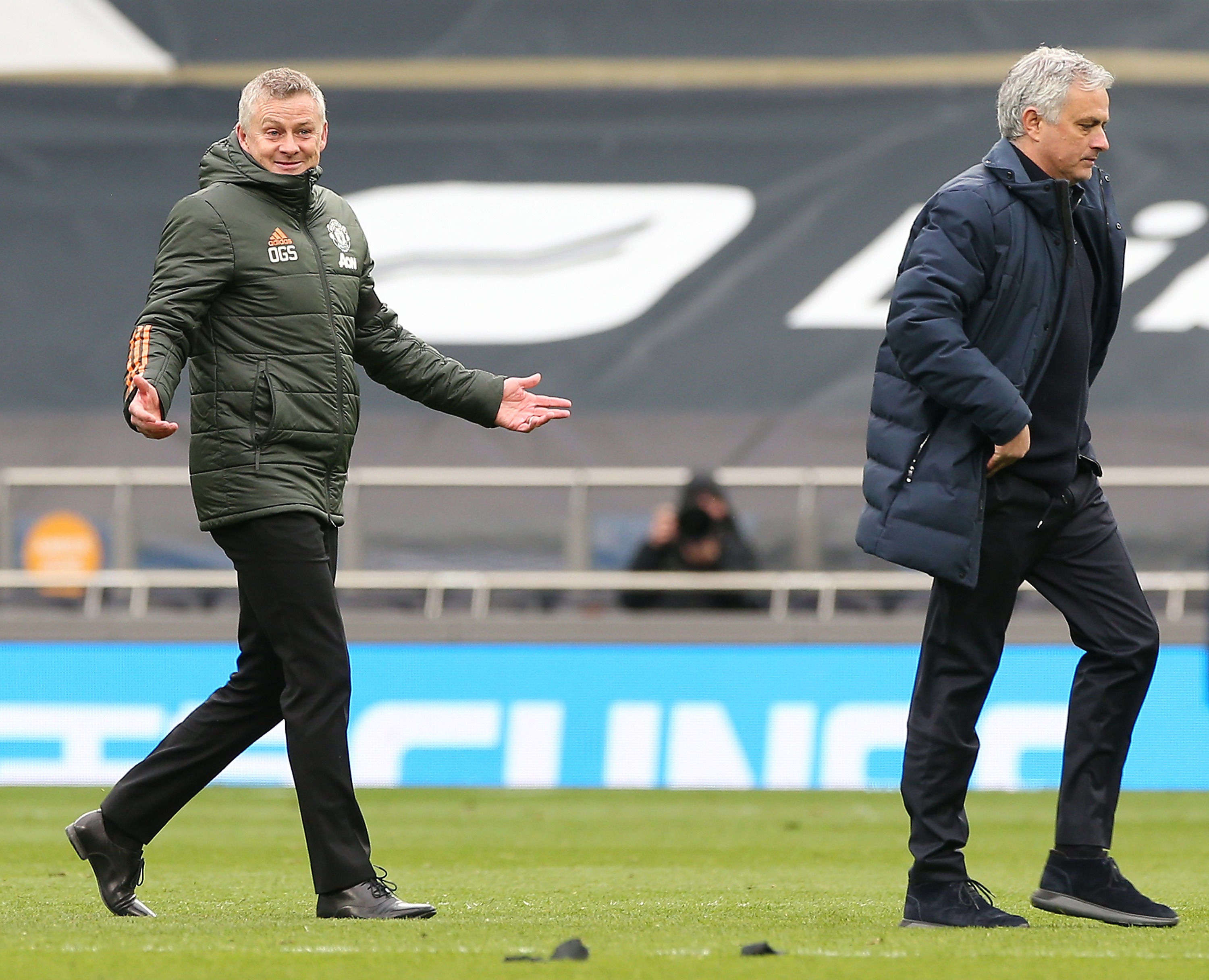 Solskjaer was not happy with Son’s theatrics and let him know it after the game – with Mourinho hitting back at his Old Trafford successorCredit: Getty

EDINSON CAVANI should not have had a first-half goal disallowed at Tottenham.

I felt Scott McTominay did not commit a foul on Son Heung-Min in the build-up to Cavani’s strike.

It was a slight hand-off by the Manchester United midfielder, the sort you see in every football match and nowhere near enough contact to force the Spurs forward to go down in the manner he did.

The incident wasn’t a clear and obvious error by referee Chris Kavanagh and a subjective decision to allow play to continue.

It was fine for VAR to check Cavani’s resulting goal but official Craig Pawson at Stockley Park should not have recommended a review.

VAR have re-refereed the incident because as soon as Kavanagh went to the monitor he was under huge pressure to overturn his original decision.

Kavanagh should have mentally tough enough to stick with his initial call as he was in an excellent position.

The PGMOL explanation of this incident was nonsense and showed a major lack of understanding of football.

If the officials deemed McTominay was a foul then why wasn’t Paul Pogba punished for a worse action on Serge Aurier earlier in the half?

This is where the inconsistency drives everyone in the game mad and it is no surprise both Jose Mourinho and Ole Gunnar Solskjaer said afterwards they don’t understand the decision making anymore.

The comments riled Mourinho and he slammed reporters on his post-match video conference for not asking him about them, even though they had not seen the broadcast.

He said: “I am very, very surprised that after the comments Ole made on Sonny you don’t ask me about it.

“Because, and I’ve told Ole already this when I met him just a few minutes ago, if it is me telling Player A, B or C from another club that ‘If he was my son I wouldn’t be giving him dinner tonight’ or something like that, what would be the reaction?

“In relation to that, I just want to say Sonny is very lucky that his father is a better person than Ole.

“I am very disappointed because with me, like we say in Portugal, bread is bread and cheese is cheese.

“I’ve told Ole already what I think of his comments.

“And I have to tell you that I am very disappointed that in seven questions you ignore these comments.” 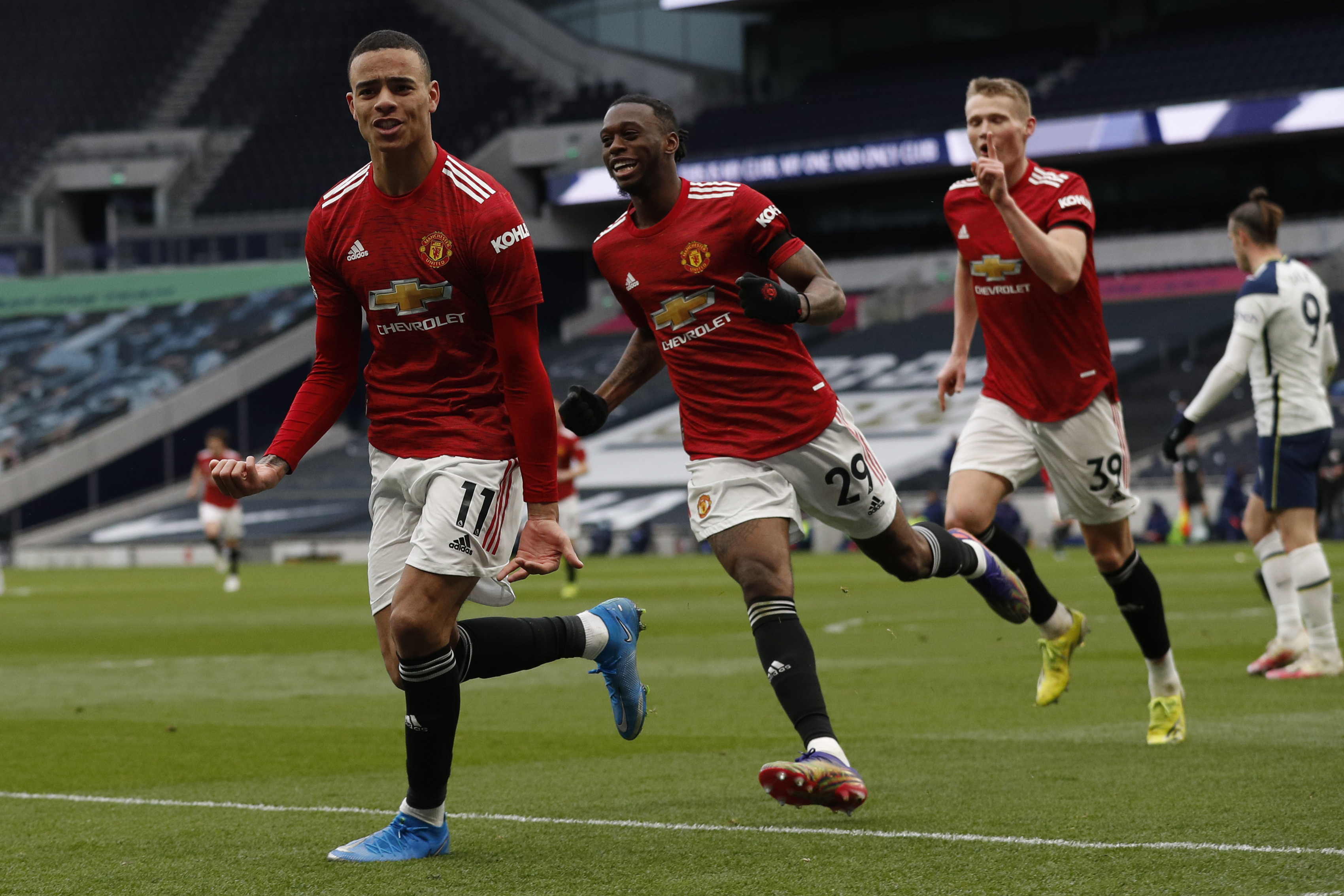 Man Utd ultimately stormed to a 3-1 win with Greenwood grabbing the thirdCredit: AP

Both managers traded jibes in the build-up to the game but the post-match comments took their feud to another level.

But even Mourinho seemed to think the decision to disallow Cavani’s goal was harsh as he admitted: “I don’t know anything any more.

“I watched Fulham versus Wolves. I don’t understand anything any more.

“Sometimes you get decisions, sometimes you don’t get. I don’t know how to comment. You don’t celebrate a goal because you are afraid.”

When asked whether his side got away with that VAR call, Mourinho snapped: “We were unlucky because maybe Paul Pogba should have got a red card for an elbow on Serge Aurier.”

Sheepish Son, 28, who let out a yelp and collapsed after McTominay’s fingers brushed his face, said: “It’s difficult for everybody. For us, for the players, for the referees.

“There are lots of contradictions and decisions you don’t understand very well. That’s not my problem, I cannot fix this.” 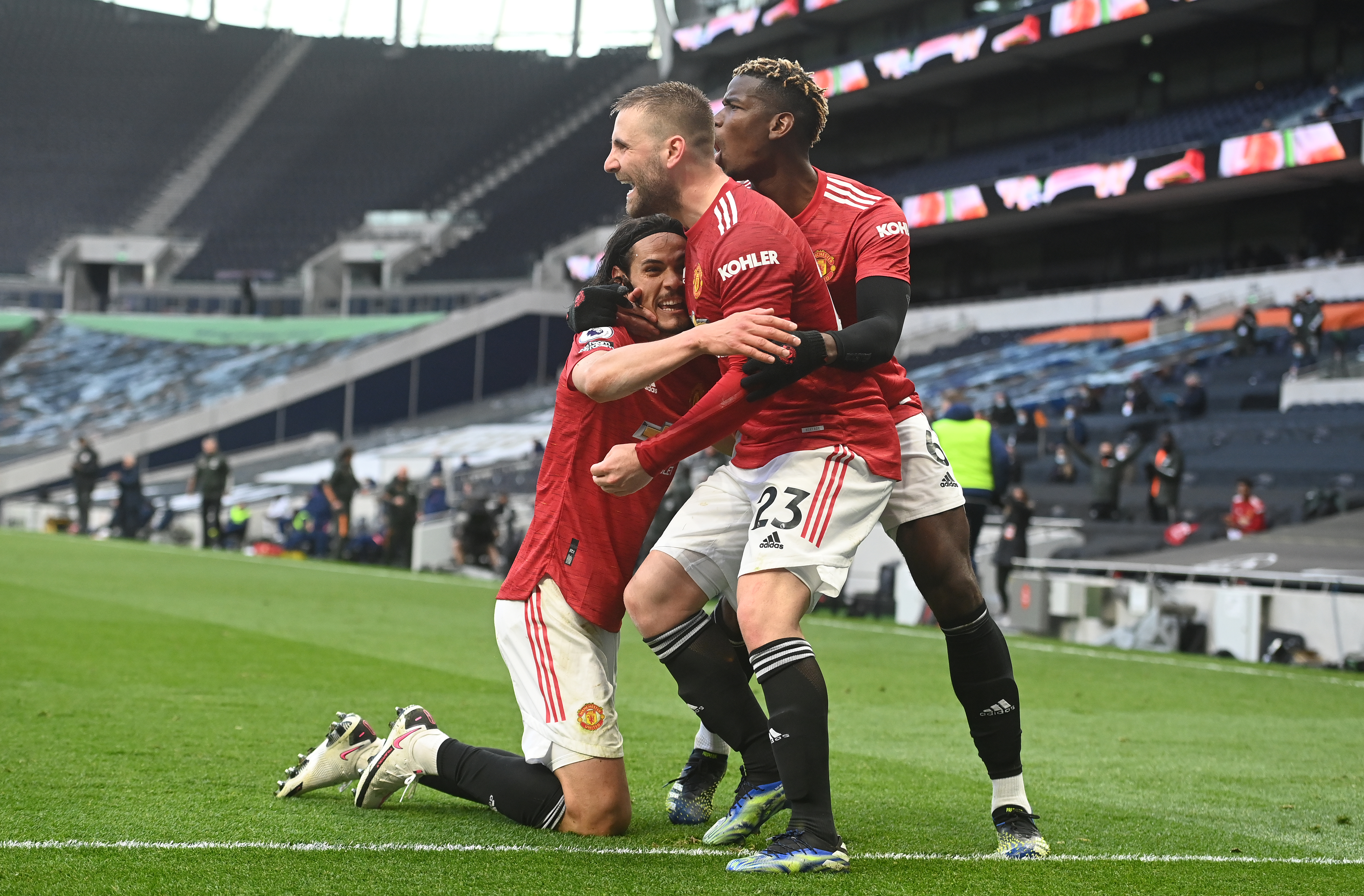 Cavani had earlier seen a strike ruled out due to McTomainy’s swipe but later got on the scoresheetCredit: Kevin Quigley-The Daily Mail

But Solskjaer admitted the injustice inspired United’s comeback thanks to goals from Fred, Cavani and Mason Greenwood.

He added: “From that moment we played some very good football and obviously conceded a goal after that.

“But the players came together and were not going to let a decision like that derail their season.

“That showed the strength and character in the team.

“We come together in difficult moments and we’ve done that many times this season.”

Solskjaer insists he will never settle for second with Man Utd