THE PGMOL and Mike Dean are yet to make a decision over the referee’s future.

Dean, 53, oversaw Manchester City’s FA Cup quarter-final 4-1 win over Southampton at St Mary’s on Sunday amid speculation he could retire at the end of the campaign.

But speculation was rife that the veteran ref will walk away at the end of this campaign before the game.

However, SunSport understands that no decision has been made so far by Dean or the refereeing governing body over whether he will continue next season.

Should Dean put down his whistle at the end of the campaign, he could stretch his red card record by taking up the role of Video Assistant Referee at Stockley Park.

Dean is about to finish his 22nd year of Premier League officiating having developed into one of the game’s most respected and well-known refs on and off the pitch. 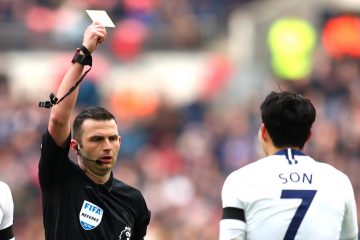 He began refereeing in the top flight in the year 2000, and has since taken charge of over 500 Prem games – the first official to do so.

Dean is the most experienced ref of the current PGMOL Prem crop by some distance – and will turn 54 in June.

Only the likes of Martin Atkinson, 50, and Andre Marriner, 51, can compare. Both Atkinson and Marriner made their Prem debuts in 2004.

It would therefore likely be a huge blow for PGMOL head Mike Riley should Dean decide to call it a day in the coming weeks.

There were reports at the end of last season that Dean could hang up his boots but the Wirral-born whistle-blower carried on into this season.

Dean has reffed 19 games in the Prem so far, giving two red cards and 62 yellow cards.

Dean made his debut as a Prem official in September 2000, taking charge of Leicester City’s home clash with Southampton.

He holds the record for being the first and only Premier League ref to issue over 100 red cards.

Dean has brandished the red card 117 times during his career – much to the frustration of many a footy fan.