MICHAIL ANTONIO came galloping back to rescue West Ham’s hopes of a top four finish with a crucial double just when they needed it most.

The Hammers were staring at the prospect of a third successive defeat when Chris Wood bagged his seventh goal in as many games from the penalty spot. 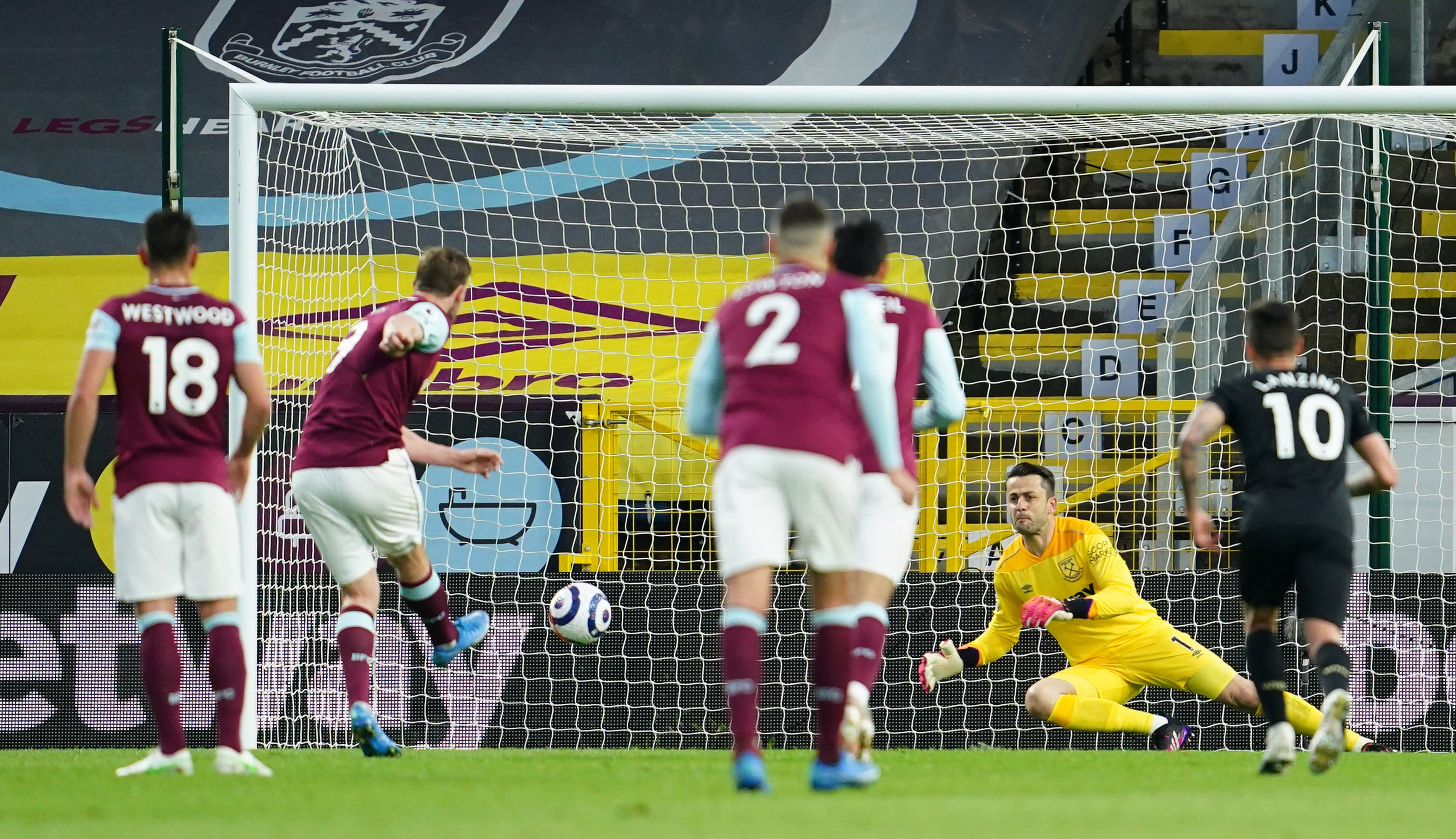 Chris Wood broke the deadlock at Turf Moor from the penalty spot with a shot low into the bottom left cornerCredit: Reuters 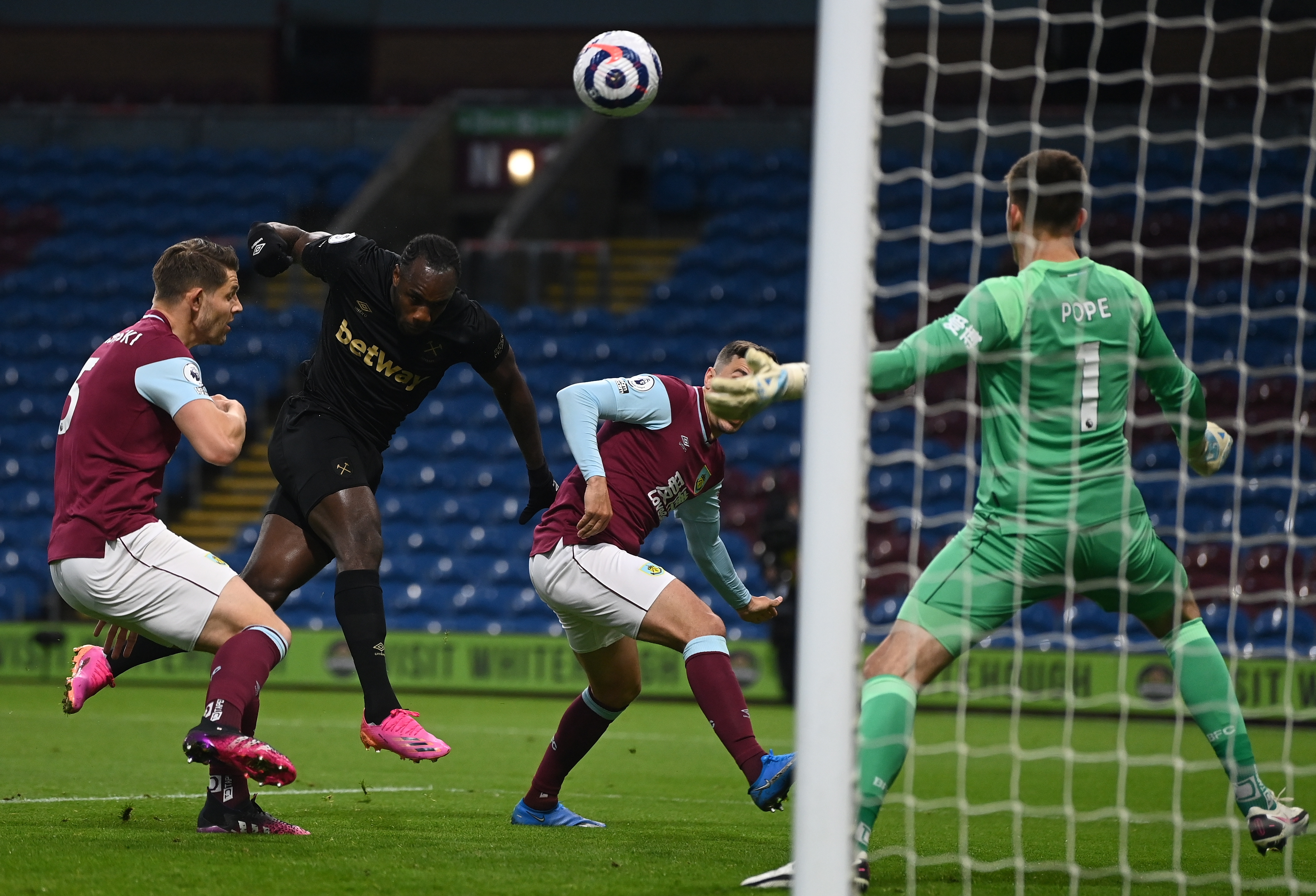 West Ham equalised shortly after thanks to Michail Antonio’s clinical header back across goalCredit: EPA

Antonio was out injured as the Hammers’ Champions League bid stalled with defeats against Newcastle and Chelsea, and he showed how badly they missed him as he seized the game by the scruff of the neck.

The West Ham striker barged his way past two defenders to head the equaliser, and provided yet another example of his predatory powers to stab home the winner.

David Moyes was tearing his hair out as his team squandered a succession of chances to make the game safe, but the Londoners saw it out to move to leapfrog over Tottenham, and move within three points of fourth-placed Chelsea.

Bunrley could have no complaints about not getting the points that would have made Premier League survival a virtual certainty.

The swagger that saw them crush Wolves 4-0 in their previous outing was sadly lacking.

Maybe the feeling that their victory at Molineux had ended Biunrley’s worries for another year contributed to the lack of urgency here.

Given the healthy gap between Burnley and the bottom three, it was the Hammers who needed the win more, and that was underlined by the way they took the game to the home side.

Antonio fired high and wide from their first attempt to trouble Nick Pope, and then Tomas Soucek was unable to get any power on a looping header. 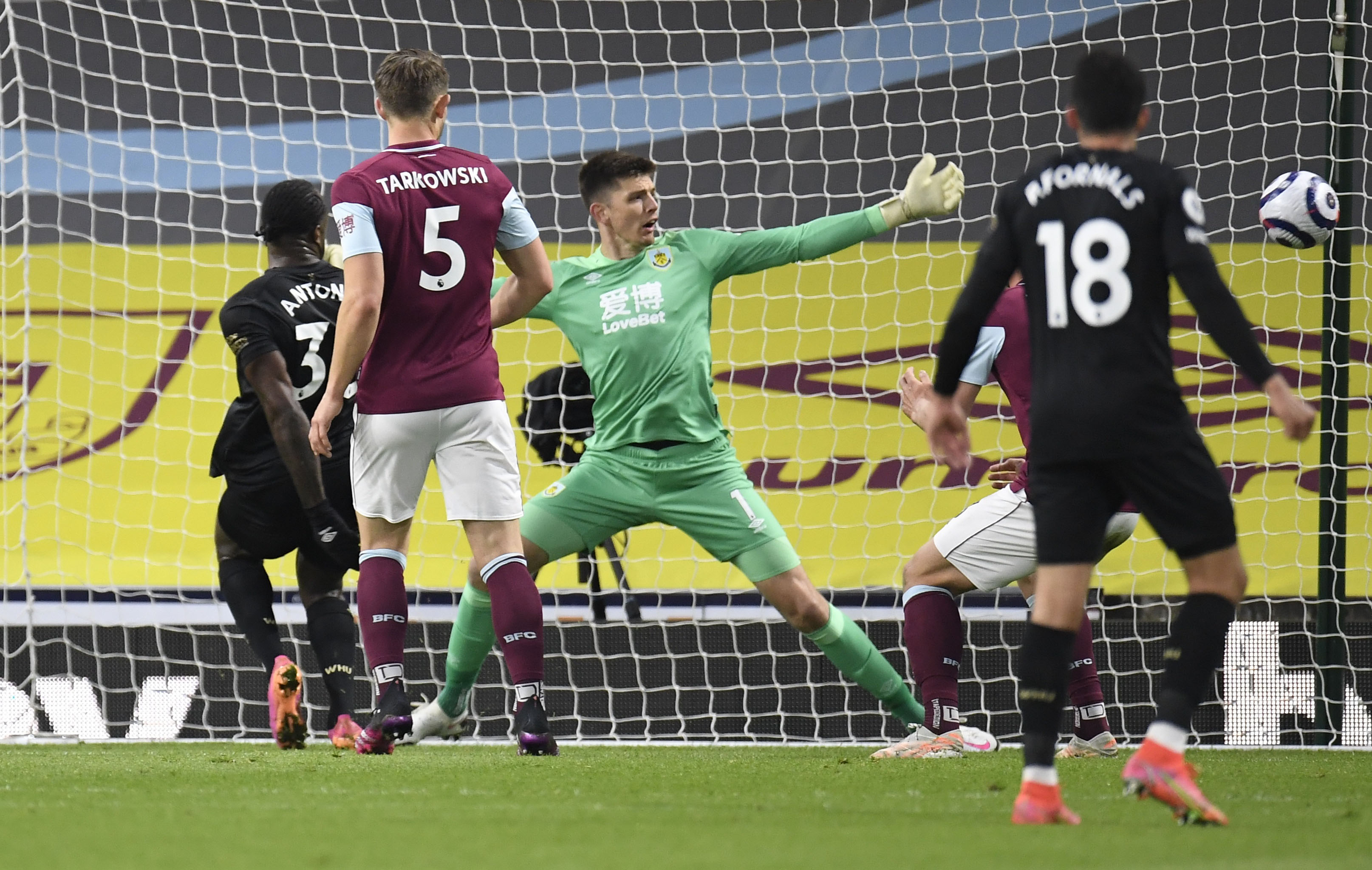 The Hammers went into the lead after Antonio got on the end of Said Benrahma’s fizzing deliveryCredit: Reuters 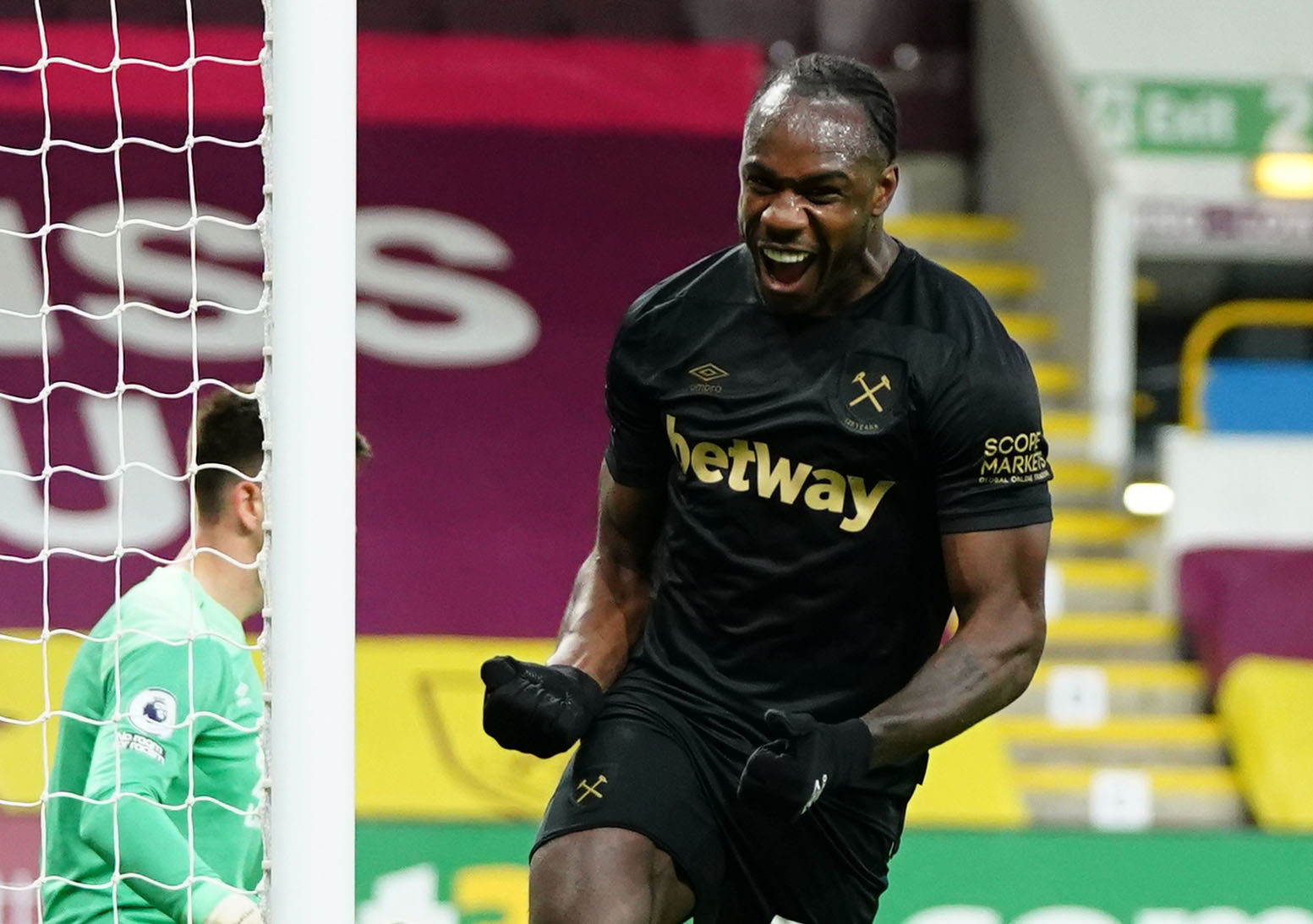 Antonio was back in the goals after making his first Premier League appearance since April 5Credit: Reuters

But there was real menace from Manuel Lanzini effort as he sent a shot fizzing just over the bar – although it was the Clarets who struck first, against the run of play.

Wood is proving a handful for any defence at the moment, and he caused panic in the Hammers ranks after racing onto Ashley Westwood’s well-weighted clip over the top.

Wood cleverly chipped the ball over the head of Issa Doop, and was just about the pull the trigger when Soucek flattened him with a clumsy challenge.

The Burnley striker picked himself up to take the 19th minute penalty, and drilled the ball into the bottom concern with the minimum of fuss.

But the home team’s lead lasted just two minutes. Vladimir Coufal whipped in a superb cross and Antonio muscled his way between James Tarkoski and Matt Lowton to score with a bullet header.

Said Benrahma was giving Lowton a torrid time, and he skinned the Burnley full back for the umpteenth time to set up Antonio’s second just before the half hour.

His curling cross might have found the net anyway without the final touch from his team-mate, but Antonio is a master of applying the finishing touch from close range.

Benrahma could not believe it when his shot flashed just past the far post after he skipped past Lowton again and put plenty of wicked curl on the ball again. 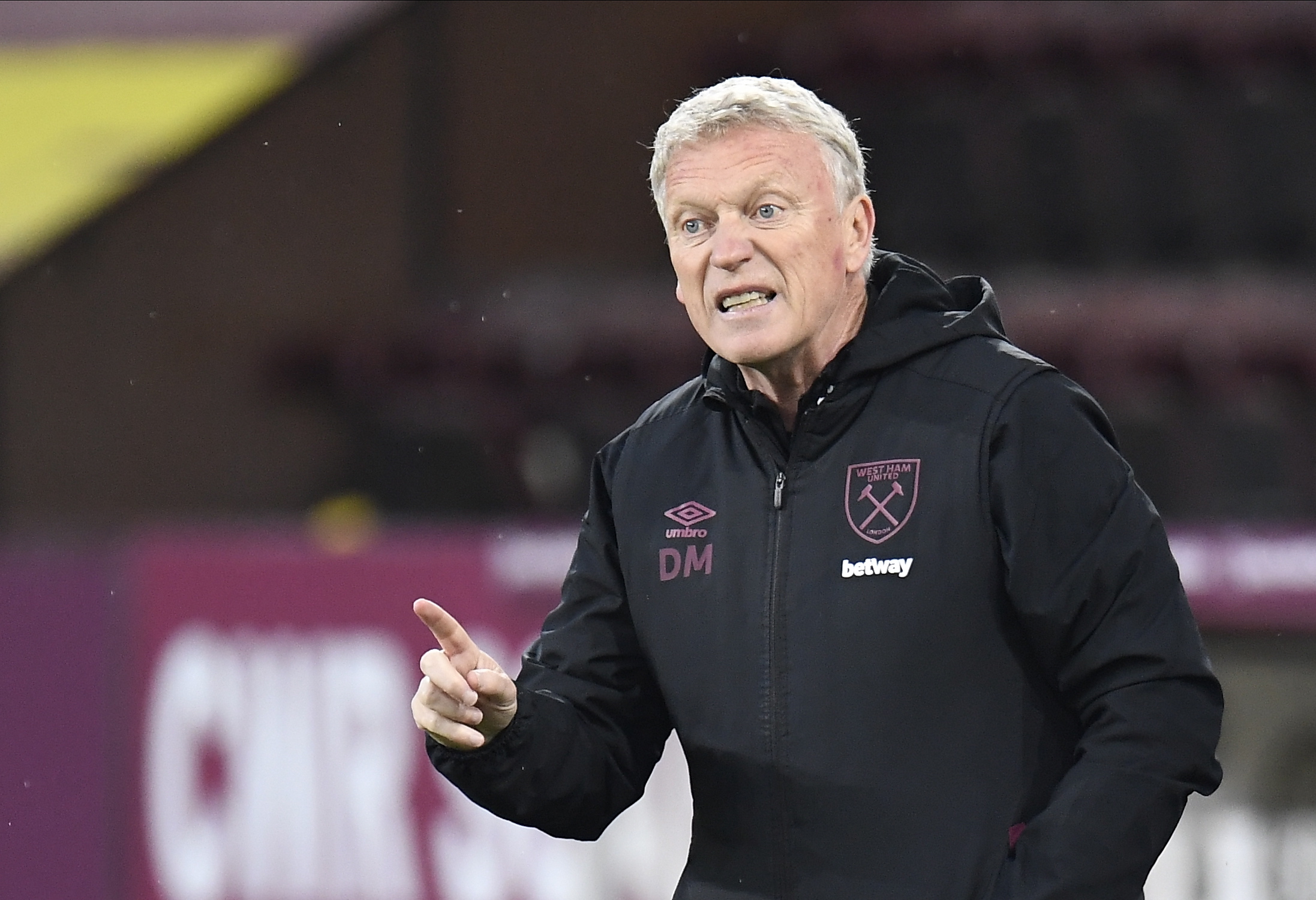 David Moyes’ side remain in the hunt for a place in the top fourCredit: EPA

But the home side showed they were still a threat, especially from long balls to their lively front two, and Matej Vydra almost levelled the scores after beating Diop to another Westwood punt.

Vydra lobbed the ball over Diop’s head and did the same thing to the advancing Lukasz Fabianski – but fortunately for the Hammer, Craig Dawson was there to head the ball off the line.

Antonio should probably have been more selfish as his attempt to slide a pass to Jesse Lingard in the Burnley box was cut out, and Tarkowski threw himself full length to prevent another Coufal cross finding Lingard.

It should have been three ten minutes after the break as Fornals drilled a low ball into the penalty area.

Antonio did not seem to know which foot to stick out and the ball bounced off his ankle to safety.

The Hammers were guilty of trying to walk the ball into the net after that, and their failure to make the most of their dominance was leaving them open to a sucker punch.

Burnley almost landed one as Dwight McNeil picked out Josh Bownhill at the far post, and Fabianski could only palm the midfielder’s shot into the path of substitute Jay Rodriguez.

Coufal threw himself full length to block the striker’s shot, and when the ball rebounded to Rodriguez he snatched at the chance and missed the target.

Policemen pelted with bottles by fans at Man Utd protest