FERRARI are doing their best to stuff up this F1 championship after a double DNF handed victory to Red Bull’s Max Verstappen.

Let’s take nothing away from Verstappen’s victory, which moves him 21 points clear of his teammate Sergio Perez, who was second in Azerbaijan. 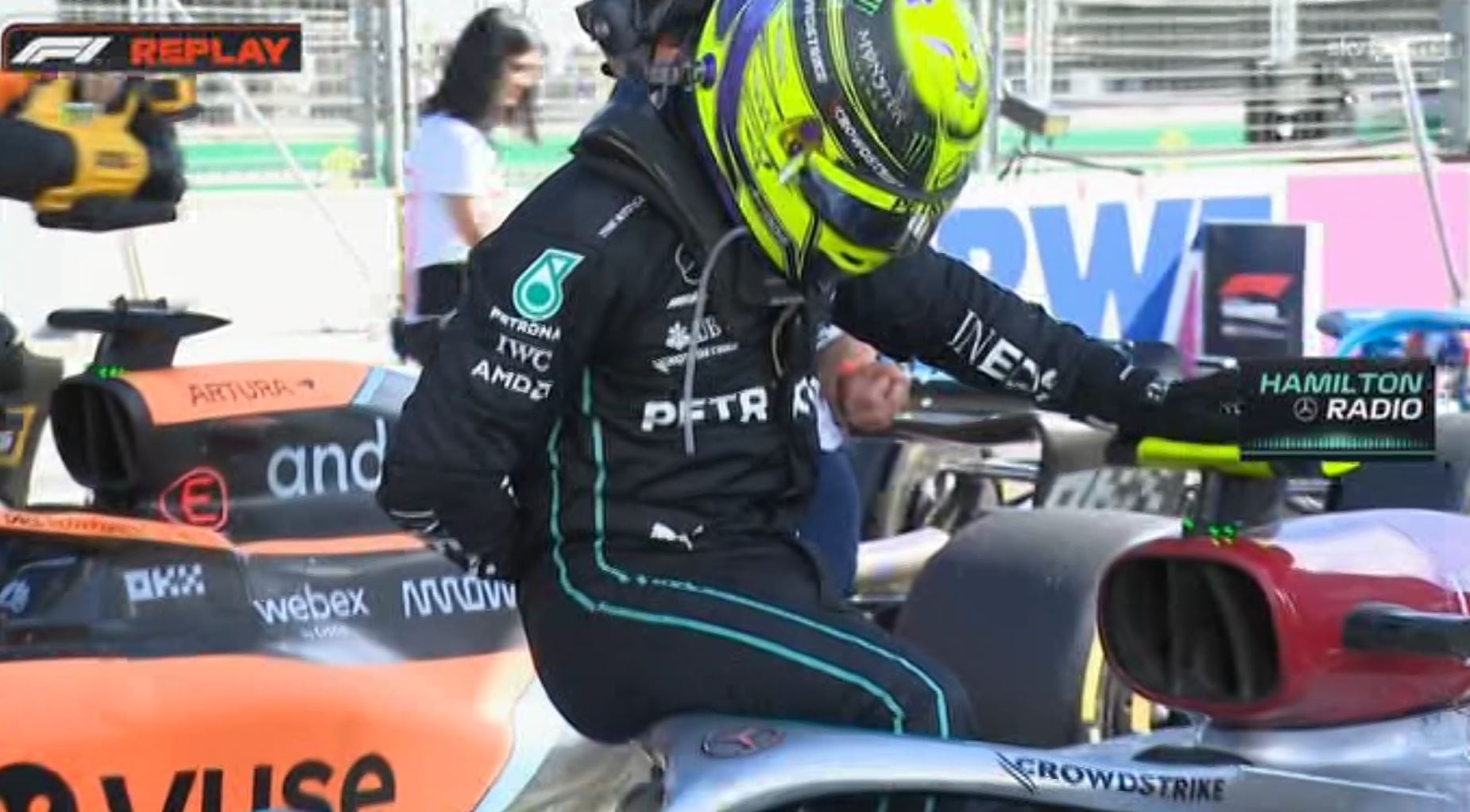 Lewis Hamilton held his back in pain after finishing the raceCredit: Sky Sports 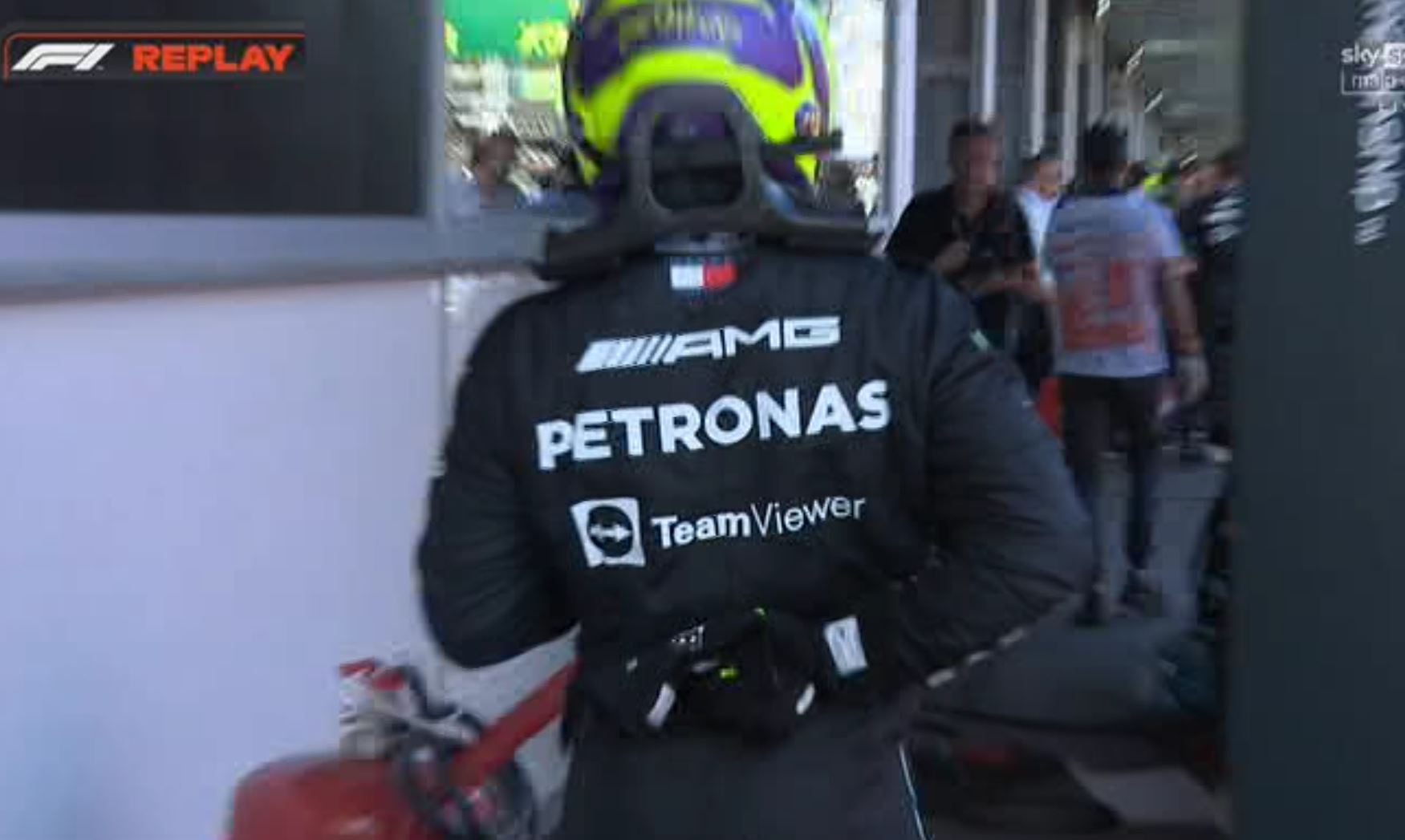 The Brit driver was heard saying “my back is killing me” on the team radio during the raceCredit: Sky Sports

Lewis Hamilton meanwhile came home in fourth but is a doubt for the Canadian GP after being pictured grabbing his back in agony.

At Ferrari it is the Italian team’s implosion – coming after such a strong start to the campaign where they have produced the quickest car on the grid – that is the talking point.

If there is one thing we have learned from F1’s most famous team, it is that they know how to royally balls things up.

They are without a title victory since 2008 but they are the undisputed champions of shooting themselves in the foot. 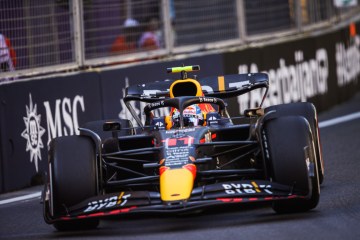 The saddest thing of course, is that they are denying Charles Leclerc his chance of fighting Verstappen for the title. And with it the prospect of some thrilling racing.

We had a taste of it in Bahrain and Saudi Arabia where he and Verstappen went wheel to wheel, but since then it has been all Red Bull.

Leclerc had taken pole the previous day with a scintillating lap that showed his car had the pace advantage.

But on lap 20 there was a pop, a poof of blue smoke from the rear of his Ferrari and his engine was done and so was his race.

His teammate, Carlos Sainz had retired just a handful of laps earlier with the team suspecting a hydraulic failure.

But it was not just the works’ team who appeared to struggle.

Alfa Romeo’s Zhou Guanyu retired from 10th place on lap 22 and he too was using Ferrari’s engine.

So too Kevin Magnussen, who pulled over on lap 33 in his Haas as only two of the six Ferrari powered cars finished the race.

Ferrari boss Mattia Binotto was already dressed in his travel kit when he completed his media duties – his team having a full two hour head start to pack up for the next race in Montreal.

He said: “We are not going to dramatise. We must understand the problems and try to solve them.

“We will be even stronger in the future. It takes patience sometimes. It can turn.”

Maybe not the words Leclerc needed to hear after his second engine failure in three races which means he trails Verstappen by 34 points in the championship.

He said: “We’ve been fast and we didn’t have particularly big problems in the first part of the season

“Now, it seems that we have a bit more compared to the beginning of the season, when we didn’t change anything. If anything, we made the thing better.

“So it’s difficult to understand for now, but we will have to analyse obviously. I don’t have the full picture of what happened.

“It hurts. We really need to look into it for that to not happen again. I can’t really find the right words to describe it. It’s very, very disappointing.”

Meanwhile, Verstappen couldn’t care less about his rival’s woes and said as much in the post-race press conference.

“S*** happens”, he said before being warned about his swearing. “It happened to me, it happened to many people in the past and unfortunately it’s happening to Charles now.

“If I would be in the same situation I would also be disappointed, I think that’s very normal, but it’s about how you come out of it.

“You always look at how to improve things and that’s what we did as well at the beginning of the season. You learn from it, you don’t like it, you are angry, but you turn it around.

“You always have to stay on it because something else might happen and you have to prevent these issues from happening.”

Verstappen has won five of the eight races this year but only had one pole position to Leclerc’s six.

And the world champion considers his Red Bull’s lack of pace to be his main weakness.

He added: “Each weekend is a bit different, but we know with the car performance on Saturday we are not as quick as Ferrari.

“Maybe it helps us on a race day, but I also want a bit more performance from myself on a Saturday.”

George Russell was third for Mercedes as he capitalised on the double Ferrari DNF while teammate Lewis Hamilton was fourth.

Russell said: “We picked up on Ferrari’s misfortune. As a team, we take that as a positive. We know we aren’t quick enough and we’ve got a long way to go to bring performance.

“We’re experimenting and trying things, one week turnaround to Montreal will be tough to find the solution but hopefully we’ll get there soon.”

Hamilton, however, hinted that his team could be forced to re-examine the design of their car due to the back-breaking bouncing he is experiencing.

He added: “There is so much potential in this car, we just can’t unlock it at all until we stop this bouncing.

“But we have a much different looking car to everyone else and we need to see if that’s right or wrong.”