Like art, business or politics, football is shaped by personalities. The present one is influenced by three coaches from Italy, Portugal and Spain. This will also be evident at Saturday’s Champions League final between Chelsea and Manchester City, the highlight of the season.

The decisive innovation can be traced back to Arrigo Sacchi. He invented the operating system that is still valid, the Microsoft of football, without which nothing works: ball-oriented spatial coverage. With this kind of choreographed play, he shaped Milan around the outstanding individualists Franco Baresi, Paolo Maldini, Ruud Gullit and Roberto Donadoni into the strongest team in the world. They reached their zenith in 1989, beating Real Madrid 5-0 in the semi-finals of the European Cup and Steaua Bucharest, winners in 1986 and with the future world star Gheorghe Hagi in their team, 4-0 in the final.

Their moves were of a higher quality and the brilliantly organised Milan kept involving the opponent in duels that led to ball losses. Steaua hardly crossed the halfway line, goals inevitably fell and the winner was clear after 30 minutes. Any self-respecting coach must have seen these 90 minutes of unequal competition.

Sacchi drove progress, first in Italy. Other Misters, as Italy’s coaches are known for their appearance and wardrobe, adopted his style. Most notably Fabio Capello, who dominated Johan Cruyff’s Barcelona with Milan in a 4-0 victory in the 1994 final. Or Marcello Lippi, who reached three finals in a row with Juventus from 1996 to 1998, and one player under Sacchi, Carlo Ancelotti, has won the trophy three times as a coach.

At that time, Italy’s football was the ultimate because patrons such as Silvio Berlusconi and Angelo Moratti financed the clubs. With their millions, they attracted the best players. As a result, Serie A won the European Cup/Champions League five times between 1989 and 2003, and the Uefa Cup and the Cup Winners’ Cup a combined 11 out of 26 times. During that time, seven clubs from Italy won a European trophy, including Parma, Sampdoria, Napoli and Lazio. No league could match that.

Germany also benefited from Italy’s high standard. In 1990, West Germany became world champions, partly because almost half the team around Lothar Matthäus played in Serie A. From 1995, the modern operating system was installed in Bayern Munich’s junior team; the ball-oriented spatial coverage and the four-man back line were revolutionary in Germany. I became German champion with the under-19s in 2001 and 2002 – a first for Bayern.

Lothar Matthäus in action during West Germany’s win over Argentina in the 1990 World Cup final. He was one of several members of the team playing in Serie A. Photograph: Colorsport/REX/Shutterstock

You always need someone who takes on the ideas of others and enriches them with his own. Our Sacchi was Björn Andersson, who won the European Cup with Bayern in the 1970s. He didn’t treat us young players authoritatively, but at eye level. With this Scandinavian pedagogy, the Swede gave my generation a new style of leadership – flat hierarchies, discussion, participation.

Innovation never goes undetected. In different locations, other coaches adapted Sacchi, developed their own programmes, added their interpretation, formed great teams with continuity, dissolved Italy’s domination. For more than a quarter of a century, Alex Ferguson gave Manchester United stability, his side resembled an attacking machine. With his flair for character, he led them to the Champions League final four times, winning in 1999 and 2008.

Louis van Gaal captured the title in 1995 with Ajax, a club from a minor league with a history of attacking football. Ottmar Hitzfeld, a master of words and people management, won titles with Dortmund (1997) and Bayern (2001). Jupp Heynckes won with Real Madrid in 1998 and Bayern in 2013, Vicente del Bosque with Real in 2000 and 2002. Frank Rijkaard, title winner with Barcelona in 2006, was also a Sacchi player.

Then José Mourinho came along. His doctrine of modern catenaccio took the offensive spirit out of football. With underdogs Porto, he triumphed in the Uefa Cup in 2003 and the Champions League the following year. In the semi-final and final in 2004, the opponent failed to score. During this period, everyone was talking about playing against the ball. 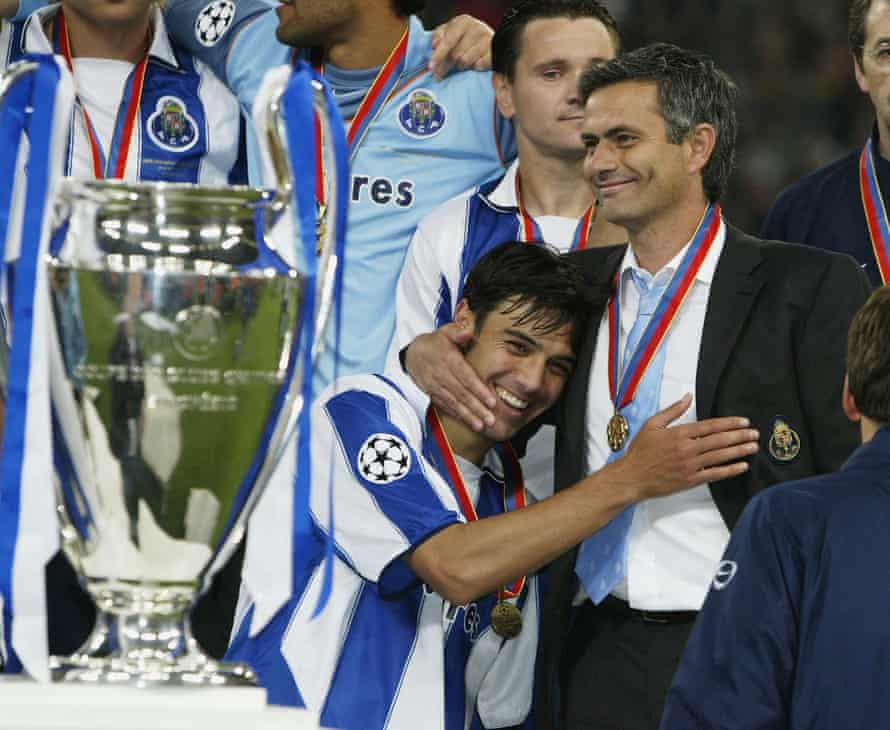 Mourinho minimises the risk of conceding a goal. Thanks to a high level of organisation and physical strength, his teams achieve curious defensive feats. For example, he built a human barricade around the penalty area with Internazionale in the 2010 semi-final at Barcelona. His teams lie in wait for the ball to be lostand they use this moment of vulnerability to raid the goal with just a few moves. In 2010, in the final against Inter, our Bayern team was outplayed.

One of Mourinho’s champions is Diego Simeone. He has been directing Atlético Madrid to a finely tuned 11-man defence for 10 years. He has won the Europa League twice and recently secured the Spanish championship for the second time. Twice he has been in the final of the Champions League, when he lost narrowly. In 2014 and 2016 – that is, at a time when another era had long since dawned.

It was the heyday of possession. It went back to Pep Guardiola, who responded to Mourinho and rolled out Sacchi offensively. Guardiola attacked. He allowed the romantic ideology of total football, with which Cruyff had reached limits in the 90s, to grow into a new flower in Barcelona. He wanted complete control of the game, tying up the opponent in the attacking half and if the ball was ever lost, they were supposed to win it back in front.

That’s how you stifle the buildup of the others, a permanent offence is created. In the first leg of our 2009 quarter-final, Barcelona beat Bayern 4-0. In the 2009 and 2011 finals, Manchester United almost didn’t get the ball. Barça were overpowering. 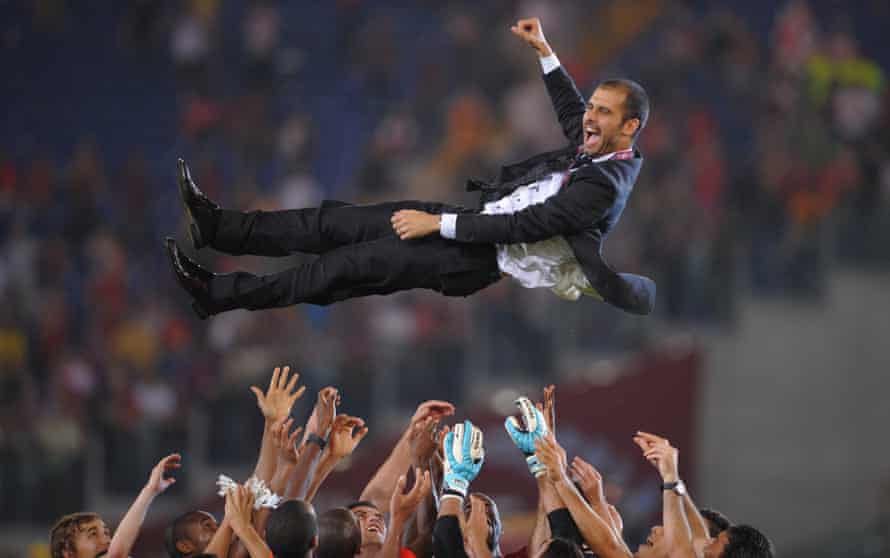 Pep Guardiola is tossed in the air by his Barcelona players after victory over Manchester United in the 2009 Champions League final. Photograph: Denis Doyle/Uefa/Getty Images

It was epochal, born in Spain and therefore had an enormous impact on the national team, which was almost unbeatable at the time. Guardiola’s play with the ball then permeated international football.

Transitions are always fluid and great coaches find intermediate solutions. In the mid-2010s, Real Madrid dominated the Champions League, winning in 2014, 2016 and 2018. The biggest club in the world always attracts the best footballers. It would have taken a long search to strengthen the XI around Luka Modric, Ronaldo, Sergio Ramos, Karim Benzema and Toni Kroos.

But football is not just strategy, which brings us to another recent example: Jürgen Klopp. He answers Guardiola with passion, physicality, belief, anarchy and dynamic counterattacking. Klopp always finds an emotional connection with his players. His final appearance with Dortmund in 2013 was a strong performance. He advanced to the final twice with Liverpool, a citythat fits his mentality perfectly. In 2019, he won.

Sacchi, Mourinho and Guardiola – the ball-oriented operating system, playing with the ball and against it, total offence, lurking on the counterattack – all this will also be on display in Porto. Because no team currently has the dominance Milan had or that the Spaniards later had, all the top teams contain this three-part mixture, including the two finalists. Manchester City and Chelsea want to lay siege to their opponents in the penalty area and put them under pressure there with gegenpressing, but they also retreat again and again and leave the ball and initiative to them.

Both clubs have charismatic coaches. Guardiola’s style remains recognisable, but he borrows defensively from Mourinho because his team is not as regally put together as Real’s or Barça’s. Thomas Tuchel is the first coach to reach two finals in a row with two different clubs. He has found recognition among the 10 or so clubs that turnover between about €500m and €1bn a year and can compete internationally. This results in an approximate equality of forces. It will probably be an exciting final.

Philipp Lahm’s column appears regularly in the Guardian. It is produced in partnership with Oliver Fritsch at Zeit Online, the German online magazine, and is being published in several European countries.