BENOIT BADIASHILE says he has had ‘contact’ with Prem clubs amid speculation of a summer move.

The French defender, 21, has been in red-hot form for Champions League-chasing Monaco this season.

Monaco star Benoit Badiashile has admitted he’s been in contact with Premier League teams over a summer transferCredit: Getty

He is being tipped with a move to either Manchester United or Newcastle in the transfer window and has just over two years remaining on his contract.

The Toon are set to spend big this summer, with boss Eddie Howe targeting a number of new recruits.

Kieran Trippier, Dan Burn and Matt Targett were brought in to shore things up in January – but the Magpies want to further improve their defence.

Badiashile said: “We all know the competitiveness of the Premier League, it is a fantastic league that of course, is very interesting and we all love the games. 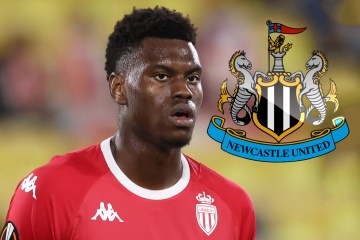 “I had the chance to play in the Champions League with Monaco and I think this club deserves this competition, it’s a club that’s used to playing in this competition and we want to get back on track.

“Right now, I’m really happy with Monaco. I had some contact in the past with some [English] clubs but I’m fully focused on the end of the season and Monaco and I feel good.”

But Badiashile won’t come cheap for either side as Monaco want no less than £40m for the defender.

And United had a transfer bid of £22m rebuffed by the French giants in 2020.

The young centre-back has already racked up 94 Ligue 1 appearances for the Monegasques, and captains France’s Under-21s.

He namechecked Liverpool’s Virgil van Dijk and Chelsea veteran Thiago Silva – as well as PSG’s Sergio Ramos, as players that he looks up to.

Badiashile added: “I watch so many games and try to inspire myself,
“I think everybody has their own style, I have my own style but of course, it is always great to look at great players and defenders like them.”