MANCHESTER UNITED have made Jude Bellingham their top transfer target this summer as they prepare a £100MILLION offer, according to reports.

The Red Devils attempted to sign the teenager back in 2020 before he chose to join Borussia Dortmund instead.

Bellingham is one of the most sought-after young players in European footballCredit: Getty

But now they are set to return for the England international once more as they bid to beat off the huge competition for his signature.

According to The Mirror, Erik ten Hag sees the 19-year-old as his main priority come the end of the season.

Since joining Dortmund, Bellingham has established himself as one of the hottest prospects in European football, contributing 19 goals and 20 assists in 109 games.

And he has pushed on even more this season, bagging 11 goal contributions in 19 appearances. 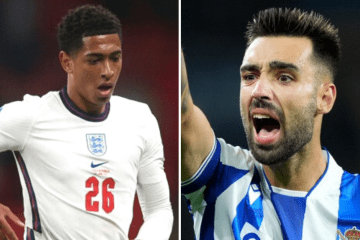 He has also been thriving for England, receiving 17 caps since his debut in 2020.

But Man Utd know they will have to qualify for the Champions League if they are to entice the former Birmingham man to Old Trafford.

That will mean finishing in the top four in the Premier League or winning the Europa League.

And that still may not be enough to sign Bellingham, with Real Madrid, Liverpool, Chelsea and Manchester City all showing interest.

Last week, when Dortmund faced Man City in Europe, manager Pep Guardiola was glowing in his praise for the young England superstar.

He said: “Borussia Dortmund is the perfect place for young talent to come.

“Maybe if Jude Bellingham was in England he would go to City, United, Liverpool, Chelsea, Arsenal or Tottenham, and maybe he would not get the minutes.

“The best thing for a young player to be better is to play minutes.

“He was 17 when he arrived but it was not just about his quality, how he was leading, his kicking, going to the referee. This guy was something special in terms of his mentality.

“Now he’s 19 and he’s already one of the captains. The quality, everybody knows it. The whole package is really good.”

It means they will face one of Napoli, Porto, Tottenham, Chelsea, Real Madrid or Benfica for a place in the quarter-finals.

And Bellingham could yet decide to remain at Dortmund beyond the summer.