BOTH Liverpool and Manchester United face a virtual grilling on Thursday over alleged involvement in plans for a breakaway European Super League. 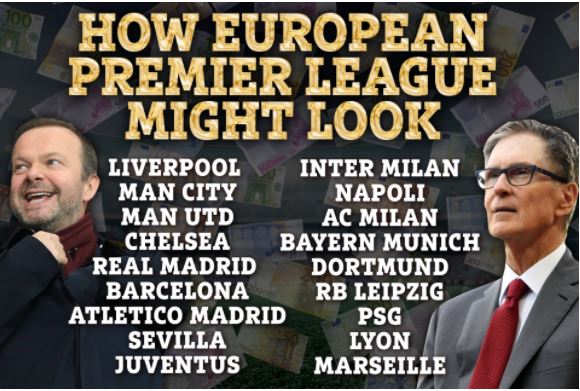 Glazer is not expected to attend today’s virtual meeting of the 20 shareholder clubs, leaving United executive vice-chairman Ed Woodward in the line of fire.

Woodward has maintained he is working with Uefa to help formulate the future shape of European football.

The United boss is part of a committee, which has been convened by Uefa president Aleksander Ceferin to design the new model.

Prem clubs, especially those outside the Big Six who risk being locked out of the breakaway closed-shop elite, accuse the North-West giants of playing both sides.

Plans for a formal launch of the Super League concept, worth an initial £3.5billion between the 15 “founder clubs”, have been put on hold amid issues over the structure of the proposed competition.

But the divisive issue, along with big questions for League chief Richard Masters over the pace of a “Strategic Review” into the Prem’s future, will dominate the meeting.

FRENCH football is facing a financial crisis after Ligue 1 chiefs failed to find a big enough bidder for TV rights.

Ligue 1 attracted bids from Amazon, Discovery and DAZN for live rights to 80 per cent of games after original bid winner Mediapro was stripped of them in December.

Mediapro had promised £717million a year — but the deal was scrapped as the money did not appear.

But all new bids were rejected as they failed to meet the bottom line, leaving clubs looking at a financial black hole.

SAILING’S greatest test of mind and body is looking for sponsors to celebrate its 50th anniversary.

A vibrant video showcasing the Ocean Globe Race, launched as the Whitbread Round the World Race in 1973 and then sponsored by Volvo, has been produced ahead of the 2023 event.

The global reach of the race, which has outlawed modern digital aids, ensures huge exposure for those companies involved.