MANCHESTER CITY won the Premier League title on a pulsating final day of the season as Tottenham beat Arsenal to the final top-four place and Burnley were relegated.

Needing to win their game and hope City lost, Liverpool were already up against it going into the final day, but faced an even more daunting prospect after conceding in the third minute at home to Wolves.

Man City scored three goals in five minutes to come from 2-0 down to beat Aston Villa 3-2 and win the Premier League titleCredit: Reuters 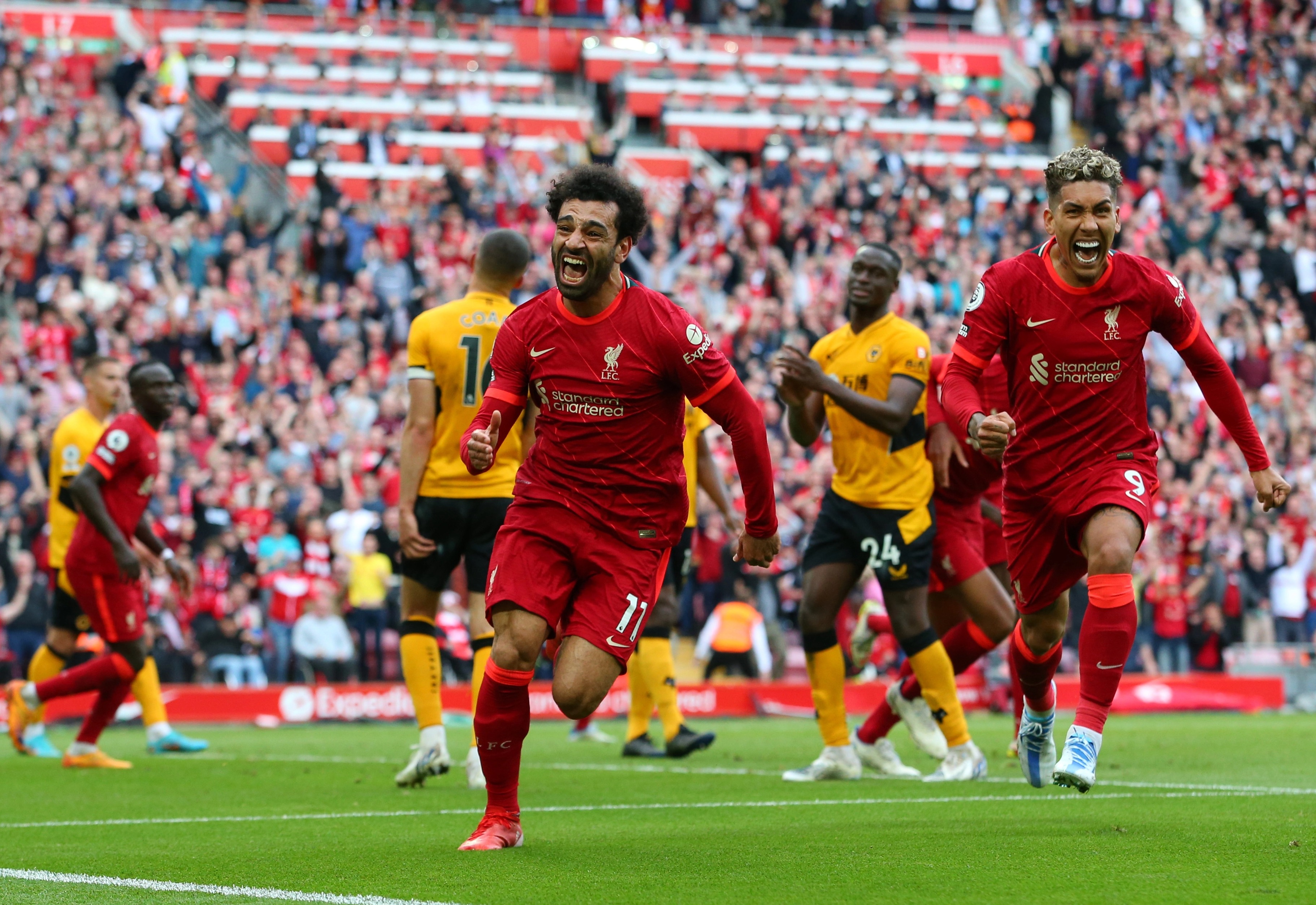 But Liverpool roared back through Sadio Mane who tucked the ball into the bottom corner following a beautiful flick from Thiago.

All the while, Man City were dominating at the Etihad, but being held by Steven Gerrard’s Aston Villa.

That was, until Matty Cash gave the visitors a shock lead shortly before half-time – heading home a Lucas Digne cross – sparking an incredible roar inside Anfield after the news had travelled the 35 miles up the M62.

At half-time, Liverpool were level on points with City – as Pep Guardiola and Co sat top only on goal difference.

Within ten minutes of the second-half, the Reds thought they had moved into top spot after Mane put the ball in the back of the net, only for the flag to go up very late for offside.

Astonishingly, with just 20 minutes to play, ex-Liverpool star Philippe Coutinho did his best to help his former club by scoring Villa’s second at City to leave Guardiola stunned.

As it stood, the Reds needed just one goal to win the league.

But the reigning champions refused to go down without a fight and pulled one back with 15 minutes still to play through substitute Ilkay Gundogan.

Two minutes later, Rodri equalised for City in a remarkable turnaround at the Etihad. As things stood, Liverpool needed to score and needed Villa to see out the rest of the game unscathed.

Unbelievably, Gundogan grabbed his second just moments later – and City had scored three goals in five minutes to go 3-2 and ensure they retained their title in the most-dramatic of circumstances.

But Jurgen Klopp and Co still needed Villa to force another twist in the tale at the Etihad.

Liverpool ensured they held up their end of the bargain as Andy Robertson made it 3-1 in the dying embers.

All Klopp and Co could do now was hope for a last-gasp equaliser from Villa at City.

But Gerrard couldn’t add to his legendary status at Liverpool as City clung on to a 3-2 win in remarkable circumstances to win the Premier League for a fourth time in five years by a single point.

While the north-west giants traded punches for the title, North London rivals Arsenal and Spurs were chasing fourth place.

The Gunners needed already-relegated Norwich to beat Tottenham, but were dealt an early blow after Dejan Kulusevski scored early on.

Gabriel Martinelli ensured Arsenal held up their end by slotting home a first-half penalty at home to Everton after Alex Iwobi’s hand-ball.

Moments later, Eddie Nketiah made it 2-0 to ensure they kept the pressure up on their fierce local rivals.

However, Spurs put themselves all-but out of sight, making Arsenal’s result almost irrelevant, as Harry Kane made it 2-0 shortly after the 30-minute mark with a simple header at Carrow Road.

On the stroke of half-time, Donny van de Beek pulled one back for Everton at Arsenal to add to Mikel Arteta’s stresses with his first – and probably last – goal for the Toffees.

Cedric Soares scored just ten minutes into the second half to reestablish the Gunners’ two-goal lead – albeit seemingly in vain – before Gabriel added another minutes later to make it 4-1.

But over in Norwich, Spurs ensured Arsenal’s result made no difference as Kulusevski grabbed his second midway through the second half.

And Son Heung-min moved level with Mohamed Salah in the Golden Boot race as he netted Spurs’ fourth.

The South Korean star grabbed his second moments later as he put one hand on the top-scorer trophy. Arsenal’s Champions League hopes were over.

Not that it mattered now, Martin Odegaard scored the Gunners’ fifth – to make it 5-1 – at home to beleaguered Everton.

At the foot of the table, there was still one relegation place to finalise – with Leeds and Burnley starting the day level on points, with the former 18th on goal difference.

But Leeds earned an early advantage after Callum Wilson scored an early penalty for Newcastle away to the Clarets.

Jesse Marsch’s side scored through Joe Gelhardt, only for the goal to be disallowed by VAR for a marginal offside in a major lifeline for Burnley.

But within 15 minutes of the second half, Raphinha scored from the penalty spot to take a giant leap towards retaining their Premier League place.

And Leeds were given another major boost as Newcastle doubled their lead over Burnley through Wilson to all-but confirm the Clarets’ relegation.

Maxwel Cornet pulled one back with just 20 minutes to play to give Burnley a glimmer of hope.

And Leeds were given an almighty scare, as Brentford equalised through Sergi Canos – before he was sent-off, reducing the Bees to NINE men following an injury.

But Marsch’s men ensured they would stay in the top-flight with a last-gasp winner through Jack Harrison. Burnley, officially relegated.

The only other major storyline for the day involved Man Utd and West Ham in their fight for the second and final Europa League place.

United started the day two points above the Hammers, but slipped 1-0 down to Crystal Palace thanks to Wilfried Zaha’s superb opener against his old club.

Just seconds later, West Ham took the lead at Brighton thanks to a thumping strike from Michail Antonio.

But just moments into the second-half, West Ham were pegged back by Brighton as Joel Veltman netted an equaliser, as United moved back into sixth.

Brighton made it 3-1 in added time through Danny Welbeck to grab their first-ever top ten finish in the Premier League, with West Ham officially finishing seventh.

United finished sixth with Erik ten Hag to enjoy the Europa League in his first season at Old Trafford.