MANCHESTER UNITED were ran ragged by Watford in a humbling 4-1 defeat at Vicarage Road.

Maguire was given his marching orders with 20 minutes left in the gameCredit: AFP 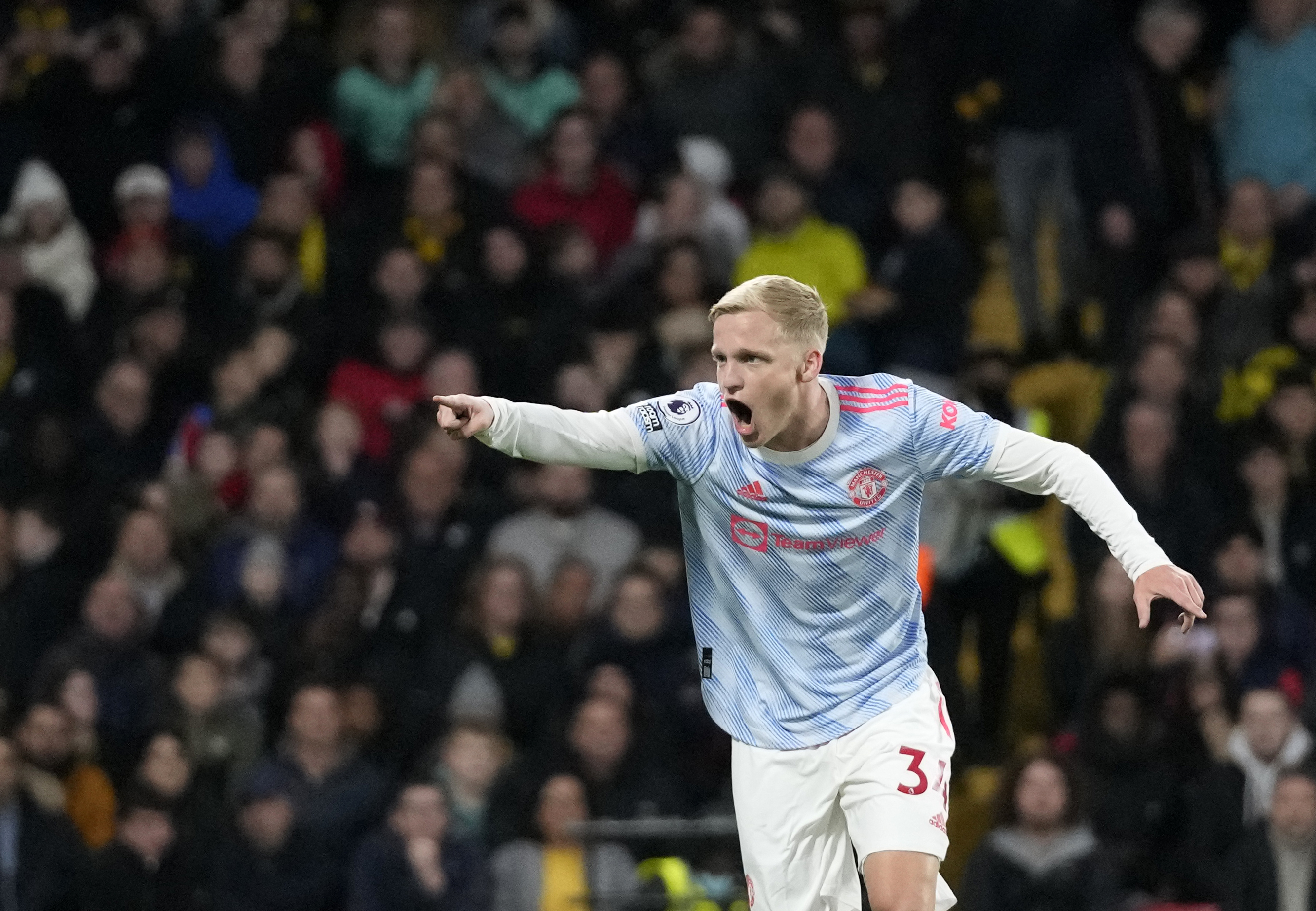 Ex-Manchester United man King gave the Hornets the lead, before Sarr atoned for an earlier missed penalty with the home side’s second on the stroke of half time.

Deserves an inkling of credit for saving two penalties (although the first was retaken) but should have done much better for Watford’s opener.

He let the ball go straight through him for King’s goal, and was too weak again for Pedro’s’ fourth.

Misery was compounded when he had to go off after being struck in the face by the ball from point blank range.

Looked unsure when he was on, and struggled to deal with the pace of Sarr.

Booked initially for a needless challenge on Sarr.

Was then sent off for a moment of madness after lunging in on Cleverley following his own heavy touch. 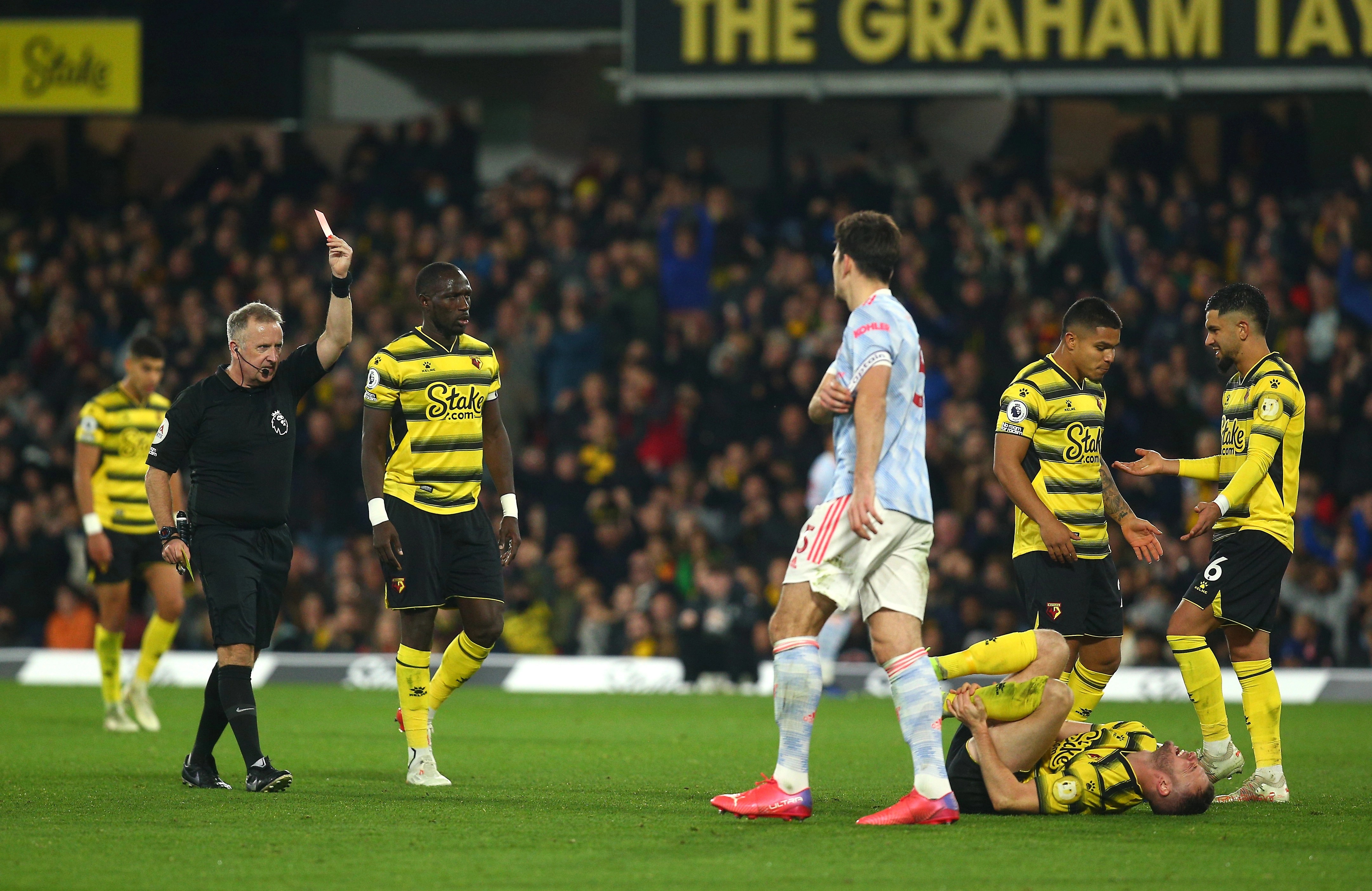 Bullied by Josh King throughout, but marginally better than his centre-half partner.

Dennis had his number all afternoon and left the defender in his wake when assisting the first goal.

Didn’t offer anything going forward but equally wasn’t helped out by right-winger Sancho at the back.

Looked yards off the pace and his lack of match time showed.

Dominated in the midfield battle by Moussa Sissoko.

Booked in the first half and hooked at half time.

Not the way he would have wanted to mark his 100th Premier League appearance.

Looked a different player in the second half and his wicked cross into the box created the Manchester United goal.

Put some other dangerous deliveries into the box but on the whole was well marshalled by Masina.

Tried to affect the game with his range of passing but they were often picked off by the Watford defence.

Had a good chance when afforded time to shoot on the edge of the area but was unusually wasteful.

Pointed at the players when away fans aimed boos in Solskjaer’s direction and had to be dragged away by Fred. 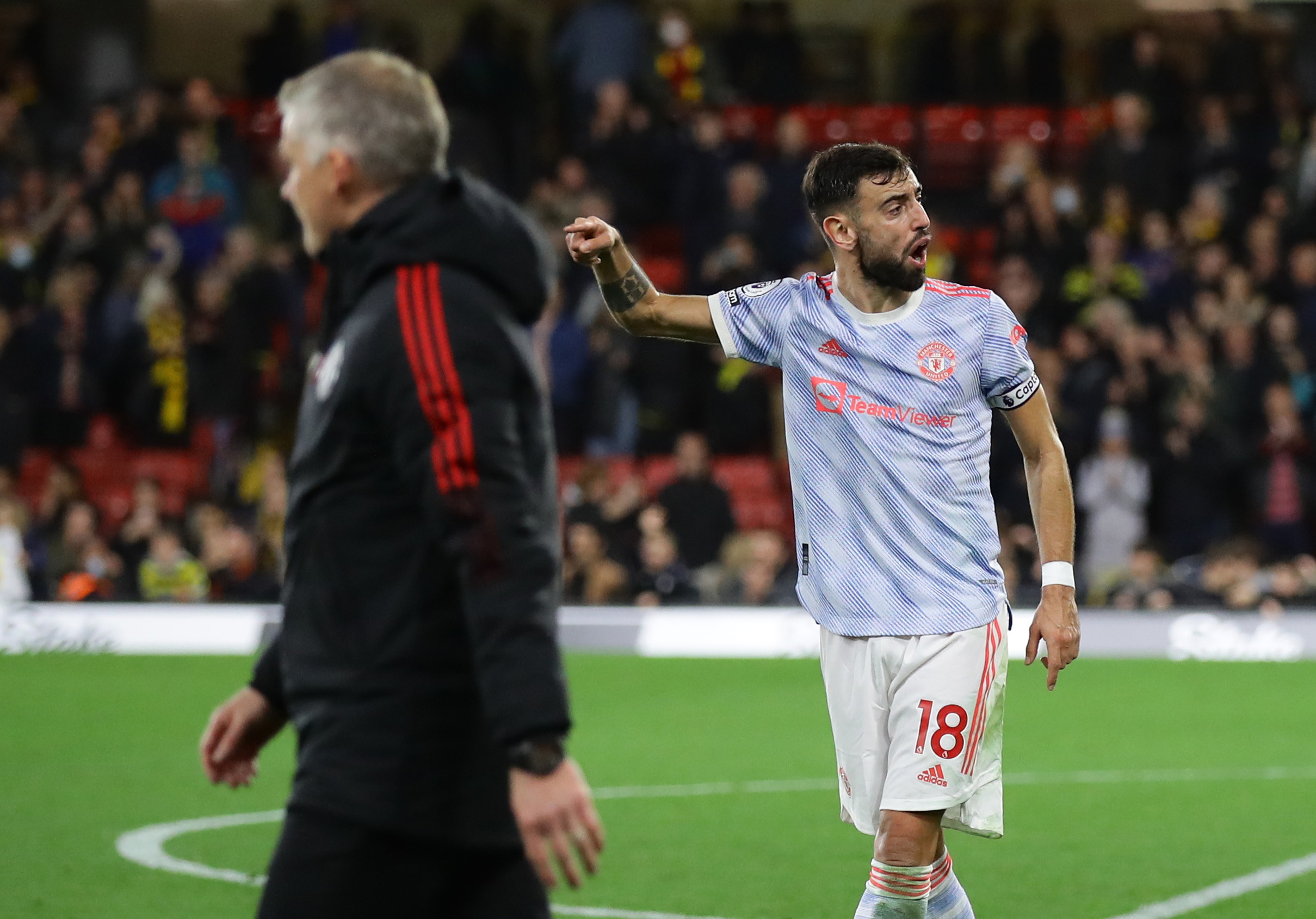 Fernandes argued with the United fans at full timeCredit: Reuters

Was United’s brightest spark in the first half but was hooked at the interval.

Wasted a guilt-edged chance to make it 2-2 after being put through on goal by van de Beek.

Looked dangerous at times but other than that was restricted to half chances by the Watford defence.

The Dutchman was finally given his chance and looked like a man possessed.

He changed the game for the period between his goal and Maguire’s sending off.

The midfielder snapped into challenges and showed the desire that the rest of his colleagues were missing.

Wouldn’t know that he came on at half time.

Hugely ineffective and kept out of the game by the impressive Kiko Femenia.

Came on for added time and touched the ball twice.