LEWIS HAMILTON has been given hope of a first race victory of the season – despite the seven-times World Champion fearing he could end up winless.

The Mercedes driver holds the extraordinary record of winning at least one Grand Prix in every F1 season he has competed in, a record that stretches back to 2007.

Hamilton has had to come to grips with an underperforming car for much of the seasonCredit: Rex

But with Merc car inconsistent and Max Verstappen dominating the championship, Hamilton’s hopes of retaining this record appear slim.

He also only has six races left to break his duck, starting in Singapore next month.

But his hopes have been given a boost as a Mercedes chief makes positive noises about the team’s hopes.

Technical director Mike Elliot says the layout of the Marina Bay circuit could play into W13’s hands, similar to previous races in Hungary and the Netherlands. 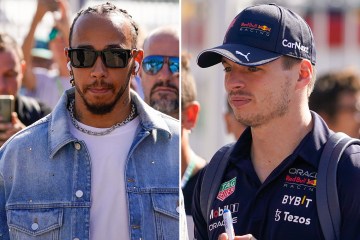 The twisty-nature of the street track and the lack of long straights could work in favour of Mercedes and allow them to be competitive.

Elliot told Mercedes’ YouTube channel: “I think when you look back at the learning we’ve gathered over the season, we expect Singapore to be a bit more like what we’ve seen in Budapest and Zandvoort. It’s a bumpy circuit, which is going to provide its challenges.

“But in terms of the nature of the corners, we think it will be better for our car. So hopefully we’ll have a good result there.

“As always we’ll do all the pre-simulation work we need to do, we’ll maximise our learning in the practice sessions and hopefully we can turn that into a good result on the weekend.”

Hamilton did not appear nearly as hopeful about the team’s chances as he branded his former title rival Verstappen “almost unbeatable”.

The Dutchman has won the last five races as hopes of another tight championship battle quickly came to be dominated by the Red Bull driver.

The 24-year-old has won 11 of 16 races so far this season and is closing in on another F1 record.

Sebastian Vettel and Michael Schumacher hold the title for joint-most wins in a single season with 13.

Given Verstappen’s form, he will be hopeful he can break the record.

His latest win came with ease at the Italian Grand Prix – but he was helped by a controversial late safety car.