LEWIS HAMILTON is revved up for the British GP after ending his podum drought with a third-place finish in Canada.

The F1 veteran, 37, came into this weekend nursing a bad back after being bashed up in Baku by his bouncing Mercedes.

Lewis Hamilton was ‘overwhelmed’ after recorded a second podium finish of the season in MontrealCredit: Reuters

But after knocking up his 184th podium, he was all smiles ahead of Silverstone and said he is feeling young again.

He said: “It’s quite overwhelming, honestly, to get this third place…

“It’s been such a battle this year with a car and as a team, but we continue to stay vigilant and focused and never give up, and that’s something I’m so proud of and inspired by.

“Red Bull and Ferrari are a little bit too quick for us at the moment but we’re getting closer. We have got to keep pushing and keep pushing. Eventually we will be in the fight. 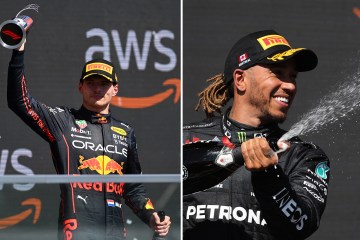 “I’m ecstatic. I didn’t expect this. It feels really special, especially as it was where I got my first Grand Prix win.”

When quizzed on his back’s condition, he added. “It is feeling good. I am back to feeling young again!”

And Hamilton admitted today’s result has given him “hope” that Mercedes have turned a corner.

He said: “It has given me and the team a lot of hope. There’s more to come from this car. The potential is truly there if we can get the setup right.

“That’s been the most difficult thing this year – really trying to optimise the set up.

“And when you have not been on the podium for a long time, it was also special as I had my first win here 15 years ago.

“To experience the energy from the crowd was very reminiscent of that first year, I am so happy with it.

“One really great thing is we’ve got really good reliability, which I think is a real tribute to all the great work the team are doing.

“So we’ve just got to keep our heads down and keep working.”

Hamilton finished ahead of his Mercedes teammate George Russell, who was fourth, for the first time since the Bahrain GP at the start of the year – the last time Hamilton had a podium.

But he is unlikely to close the 98-point gap on championship leader Max Verstappen, whose victory in Montreal was his sixth of the year.

However, he admitted he was put underpressure after a late safety car that sparked an exciting race to the line with Ferrari’s Caros Sainz.

Verstappen said: “The safety car didn’t help. Overall Ferrari were very quick in the race, so it would have been tough for me to close the gap, even on fresh tyres.

“It was exciting at the end and I gave it everything I had.”

Meanwhile, Sainz, who was second, said: “I was pushing flat-out. I wasn’t leaving any inches. I was pushing very hard to pass Max but we just didn’t have enough pace.

“The positive thing is we were faster but needed a little more to overtake around here.

“I am particularly happy with the race pace and the way we managed to keep the pressure on Max.

“We tried everything and were very close to winning, so I will take the positives and keep trying in the next one.”