THEY came to praise Patrick Vieira, not to bury him.

But while the Arsenal fans rolled out the welcome mat for their former captain, no-one expected the players to be quite so accommodating.

Arsenal skipper Pierre-Emerick Aubameyang opened the scoring early on at the EmiratesCredit: Reuters 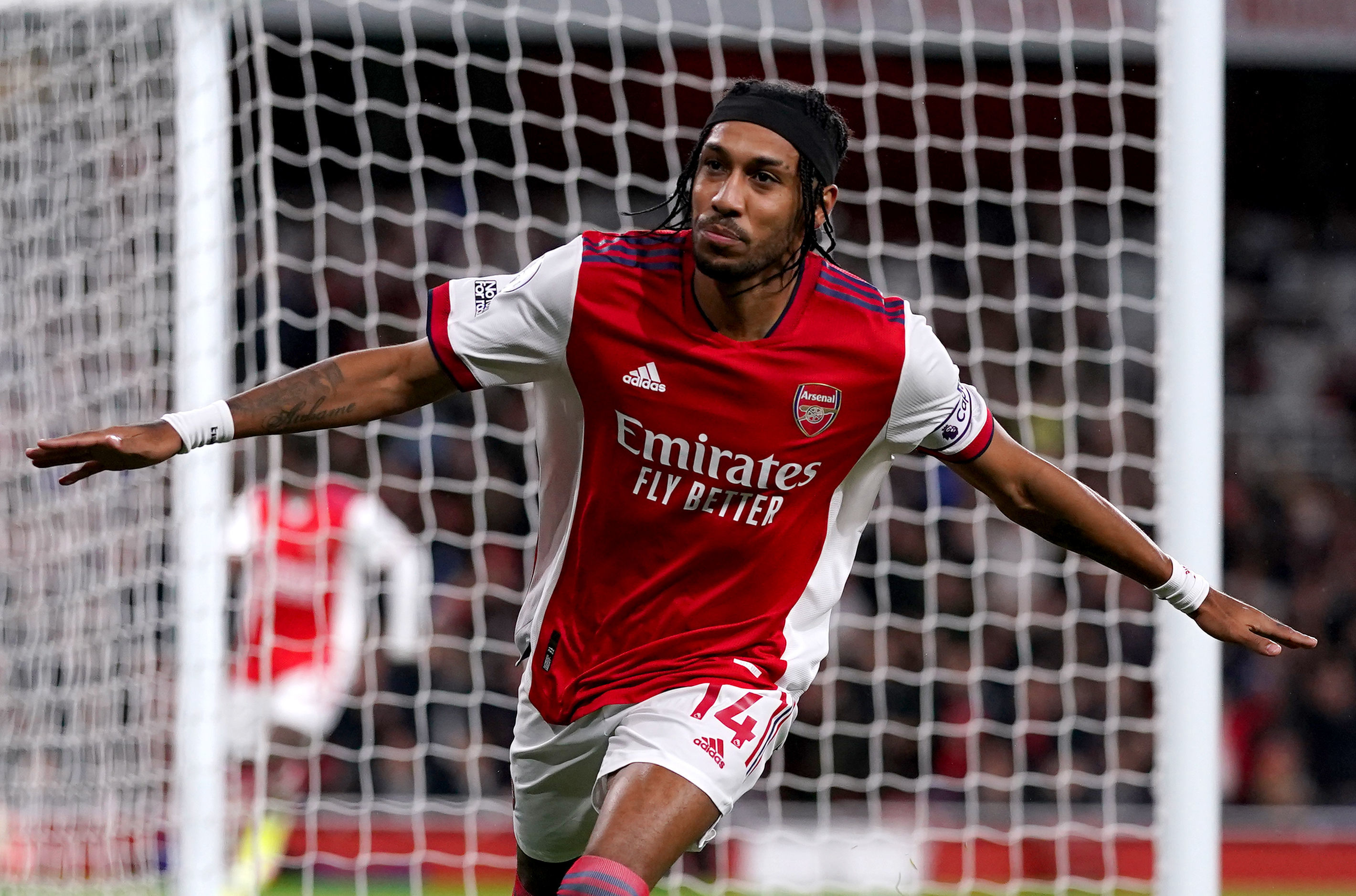 And even Alexandre Lacazette’s 95th-minute equaliser could not disguise just how far the Gunners have fallen since Vieira was in his pomp.

As a player, the French powerhouse was never afraid to speak out when he felt that the team was not meeting his expectations.

So quite what he would have made of this current crop of underachievers doesn’t bear thinking about.

The giant Frenchman was a picture of desolation when substitute Lacazette levelled with virtually the last kick of the game.

His Crystal Palace team appeared to be cruising towards a well-deserved victory which would have taken them above Arsenal in the table.

But in the end he had to settle for a share of the spoils after second-half goals from Christian Benteke and Odsonne Edouard had cancelled out Pierre-Emerick Aubameyang’s early strike. 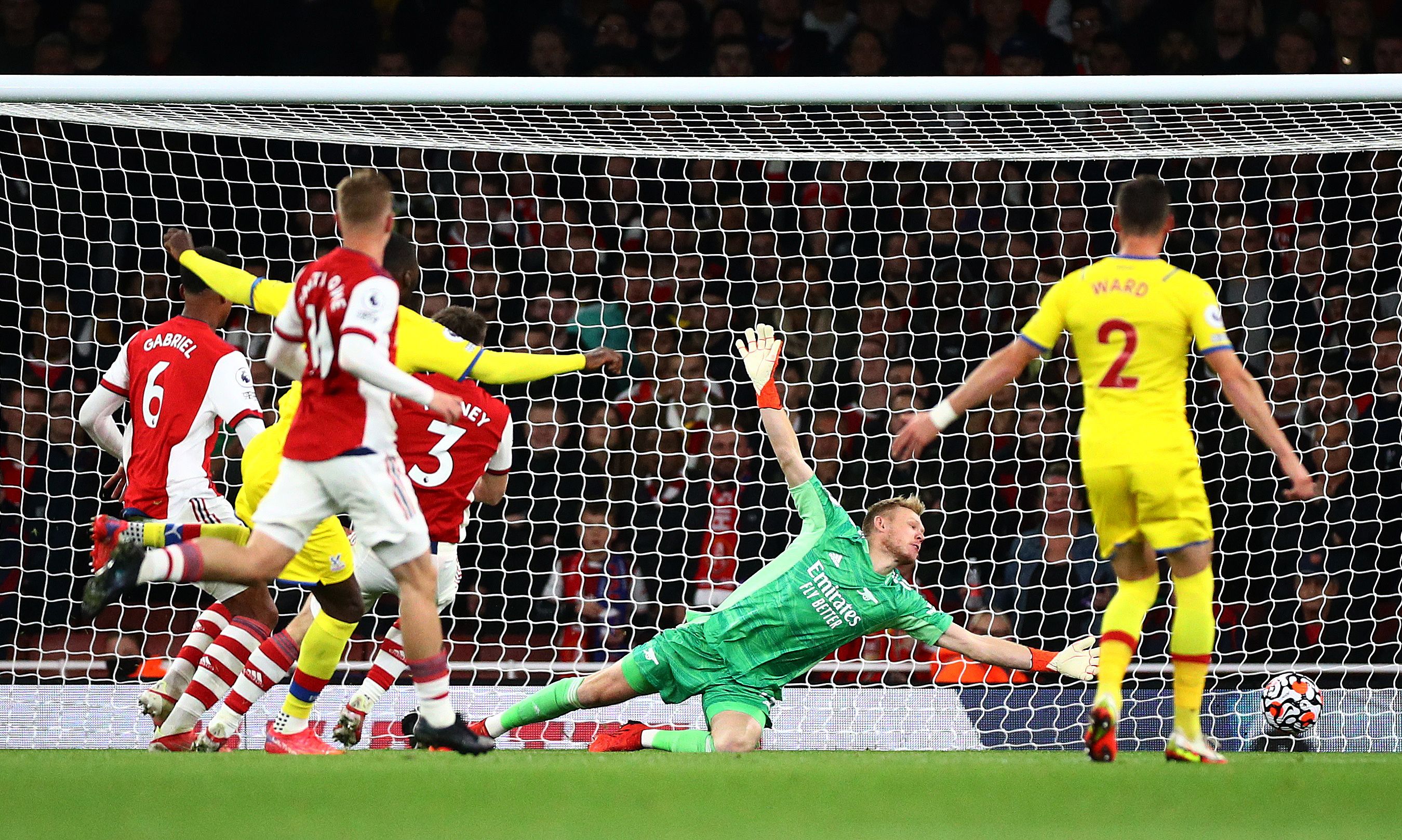 Christian Benteke fired the Eagles level just after the break with a low strikeCredit: Reuters 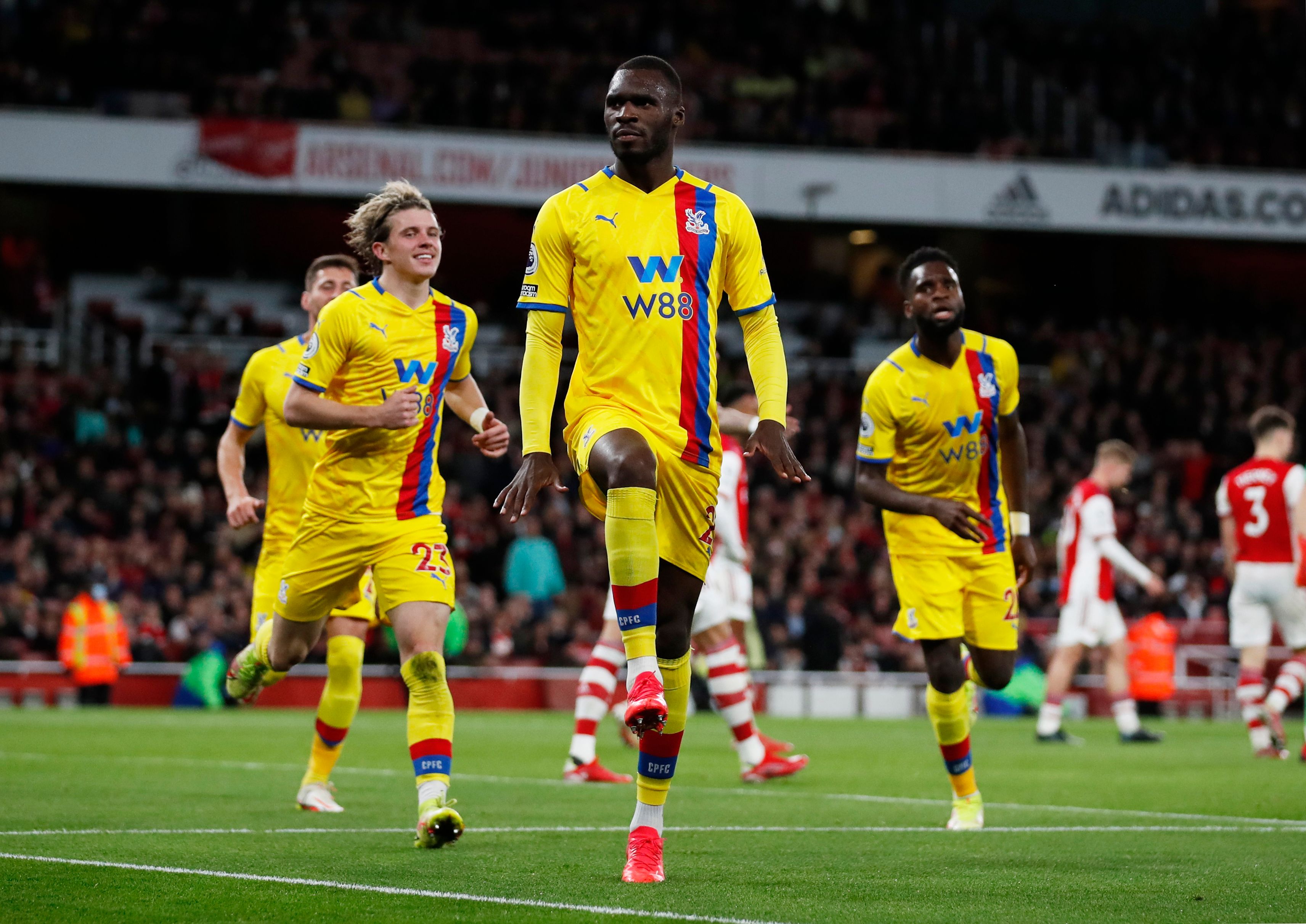 Belgian ace Benteke celebrates after scoring his first goal of the seasonCredit: Reuters

And there will be plenty at the Emirates now wondering if their club missed a trick when they appointed Mikel Arteta instead of their former Invincible.

It must have been a surreal experience for the big Frenchman whose only appearance at the Emirates was in the 2009-10 season during his spell at Manchester City.

He was given a predictably rapturous reception when he took his place in the visitors’ dug-out.

But while the song remains the same – and Tottenham have still won f*** all – everything else has completely changed for Arsenal.

Forget the Champions League, they can’t even qualify for the Europa Conference League these days.

And though Arteta is doing his level best to get them back on track, it is proving to be a painfully slow process.

They thought they had turned the corner when they won three on the spin last month after a dreadful start to the campaign.

But an unconvincing goalless draw at Brighton suggested that they are still far from the finished article. 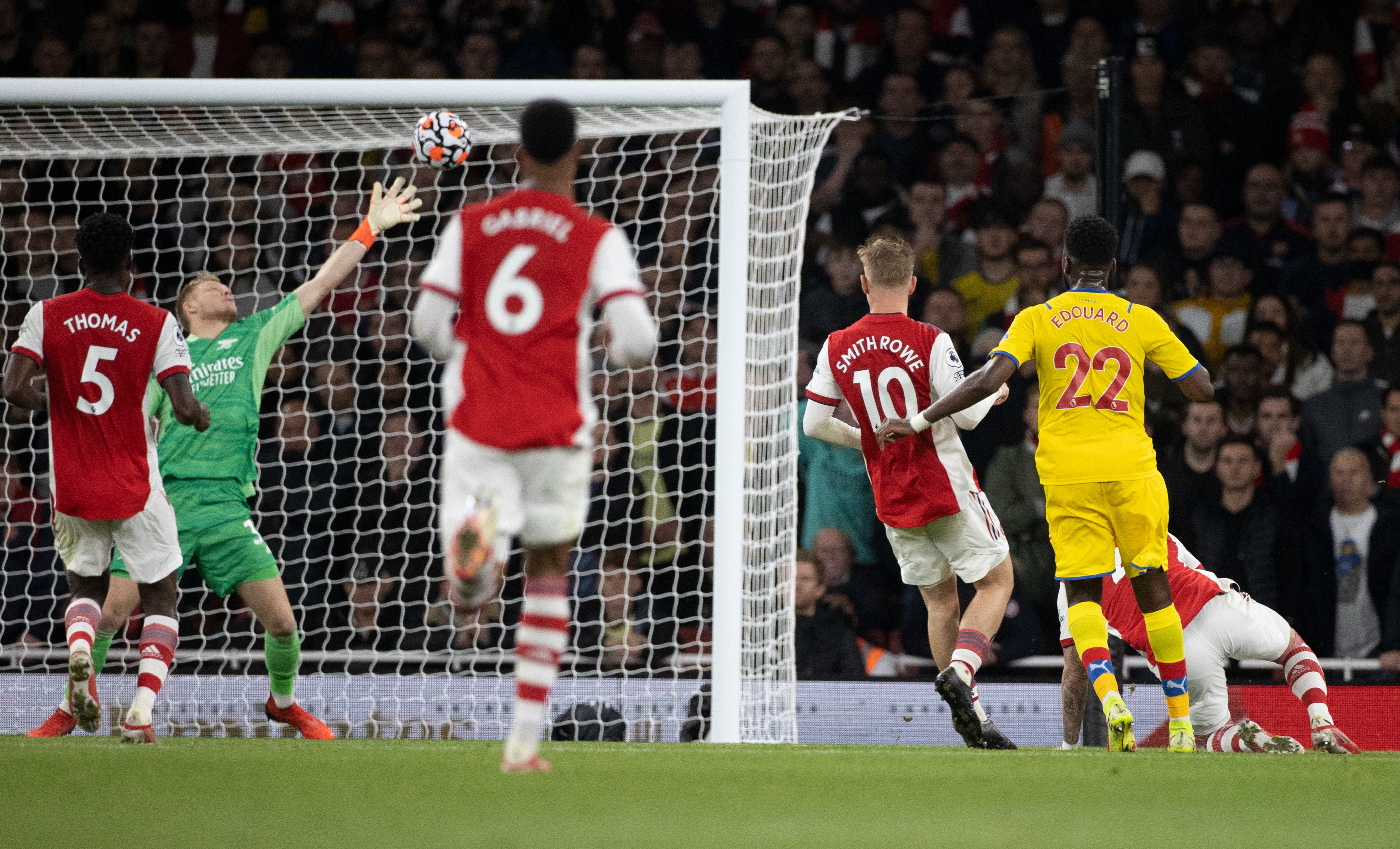 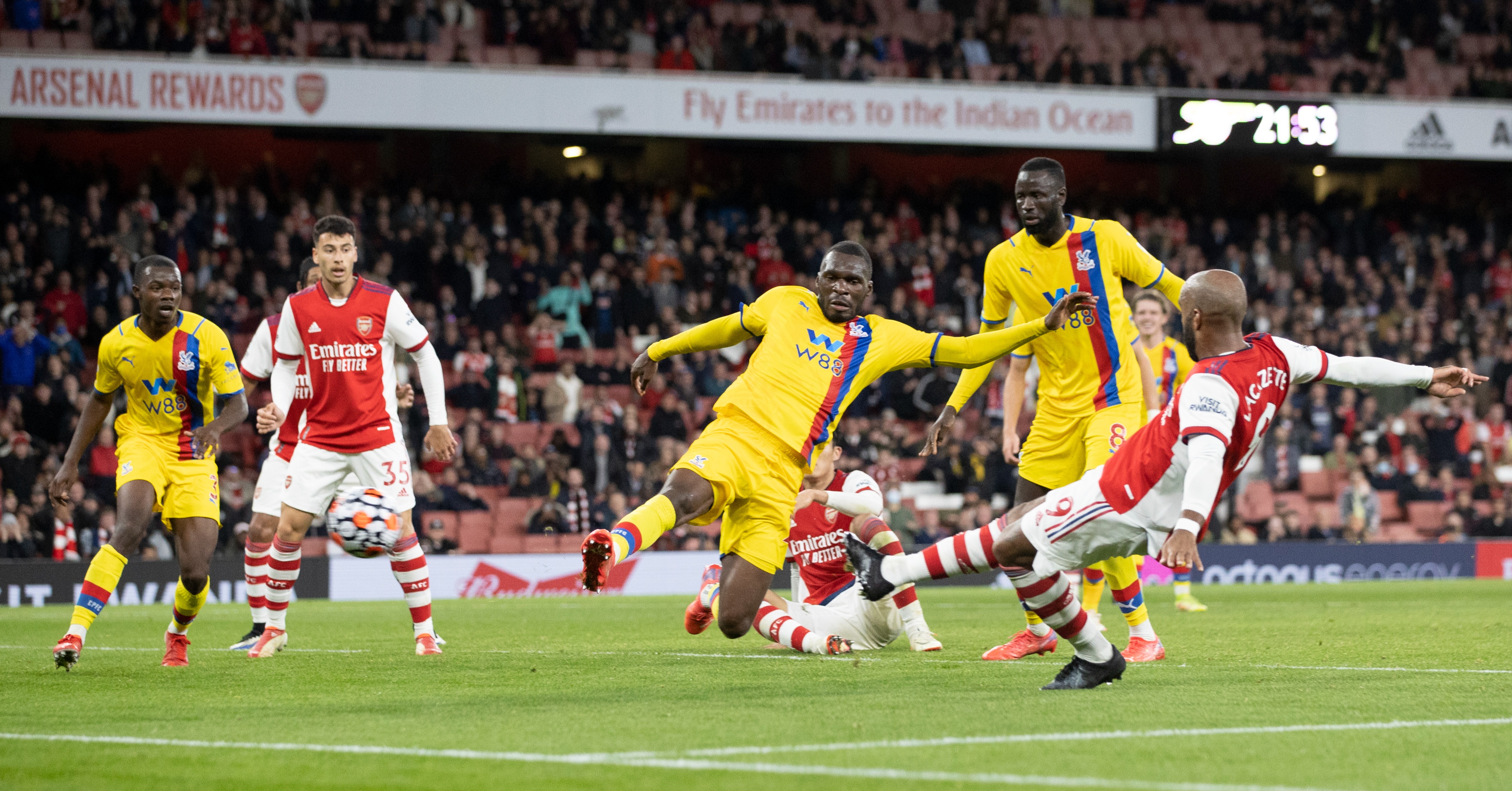 Alexandre Lacazette rescued a point for Arsenal after smashing home in the 95th minuteCredit: Richard Pelham / The Sun

And those suspicions were confirmed by a Crystal Palace team who dominated possession throughout and were far the more adventurous team.

Yet it had all started so promisingly for Arteta when his team took an eighth-minute lead through captain Aubameyang.

Palace keeper Vicente Guiata threw himself across goal to claw the ball away but was powerless to keep out Aubameyang’s follow-up volley from the tightest of angles.

It was the worst possible start for a Palace team missing Wilfried Zaha, who was ruled out by a bug he picked up while on international duty with Ivory Coast last week.

The travelling fans knew their team hardly ever wins without their talismanic winger – who usually reserves his best efforts for the Gunners.

But Palace are no longer a one-man team and the way they took the game to their opponents confirmed just how their ambitions have soared since Vieira replaced Roy Hodgson in the dug-out.

For the first 20 minutes they struggled to find their stride as Benteke tried to bludgeon his way through to goal and thought he should have had a penalty when he was squeezed out by Thomas Partey and Gabriel. 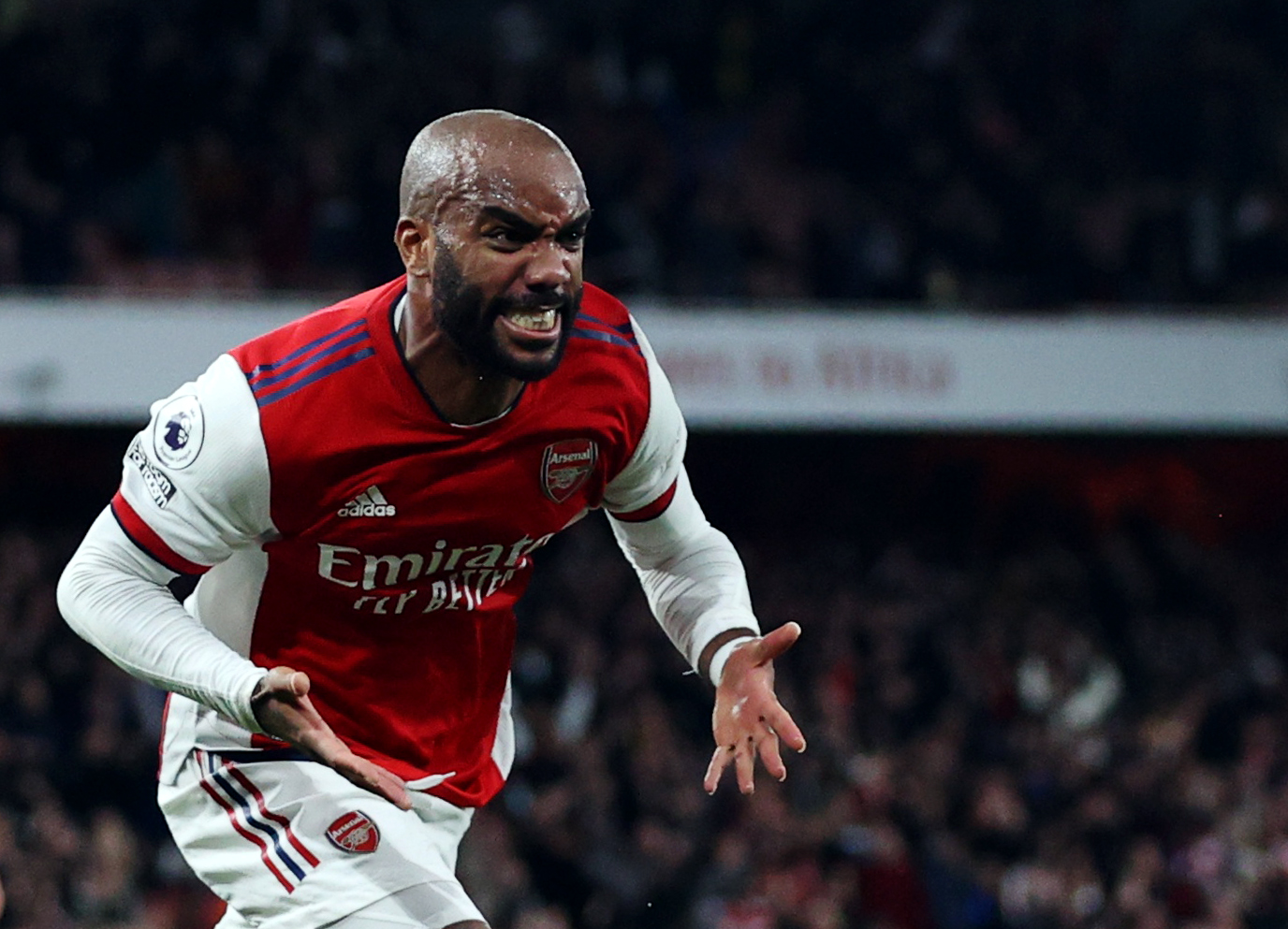 Substitute Lacazette found himself unmarked inside the area before firing into the cornerCredit: Reuters 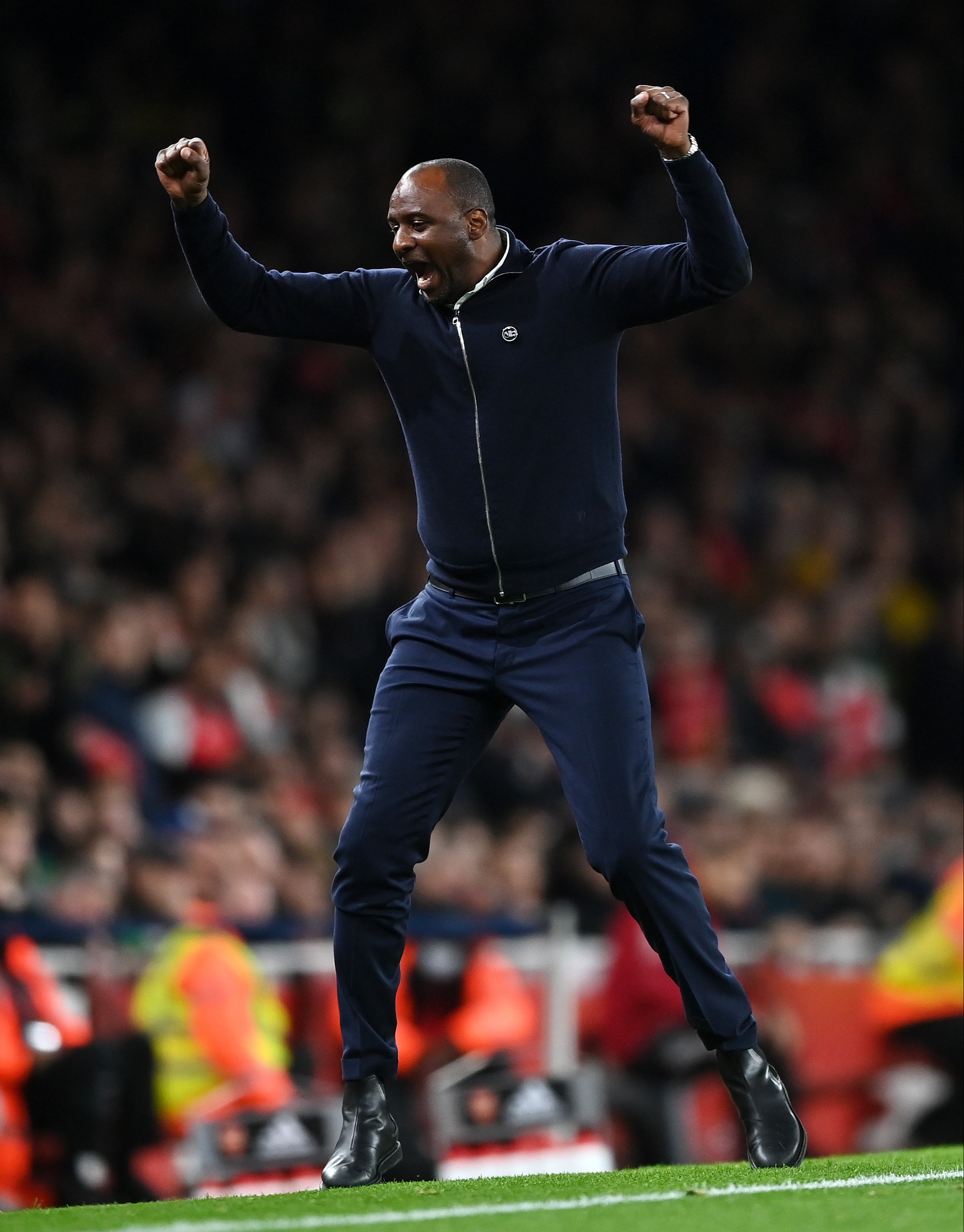 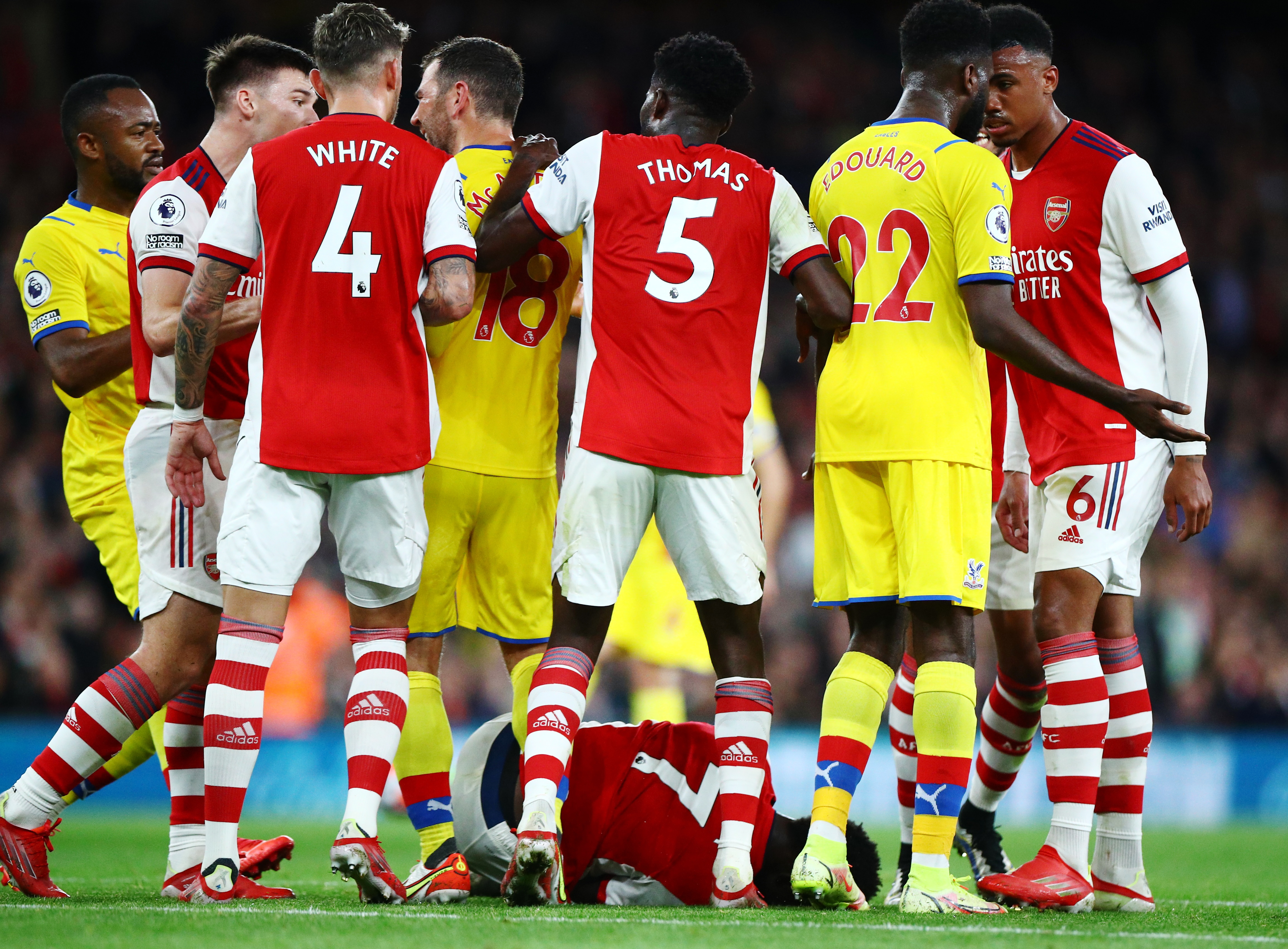 Tensions threatened to boil over in the first half between the two teams after Bukayo Saka was kicked by James McArthurCredit: Reuters

But their first attempt on goal didn’t arrive until the 24th minute when Conor Gallagher’s tame shot on the turn failed to trouble Aaron Ramsdale.

The Arsenal keeper was given more of a test when Benteke was allowed too much room to turn and shoot from the edge of the area…but it was still a routine save.

Odsonne Edouard squandered an even better opportunity when he fired wastefully high after being set up by Tyrick Mitchell.

At least the visitors were playing in the right half pitch after struggling to keep their opponents at arms’ length during the early exchanges.

Benteke was just inches from getting on the end of Jordan Ayew’s cross before Gallagher’s thumping volley in first-half stoppage time required excellent reflexes from Ramsdale to keep his team ahead.

It was difficult to understand how Arsenal had lost control of a game which they looked to have in the palm of their hands.

Yet they failed to heed the warning signs and paid the price when Partey was caught in possession by Ayew for Benteke to hammer a 50th-minute shot into the bottom corner. 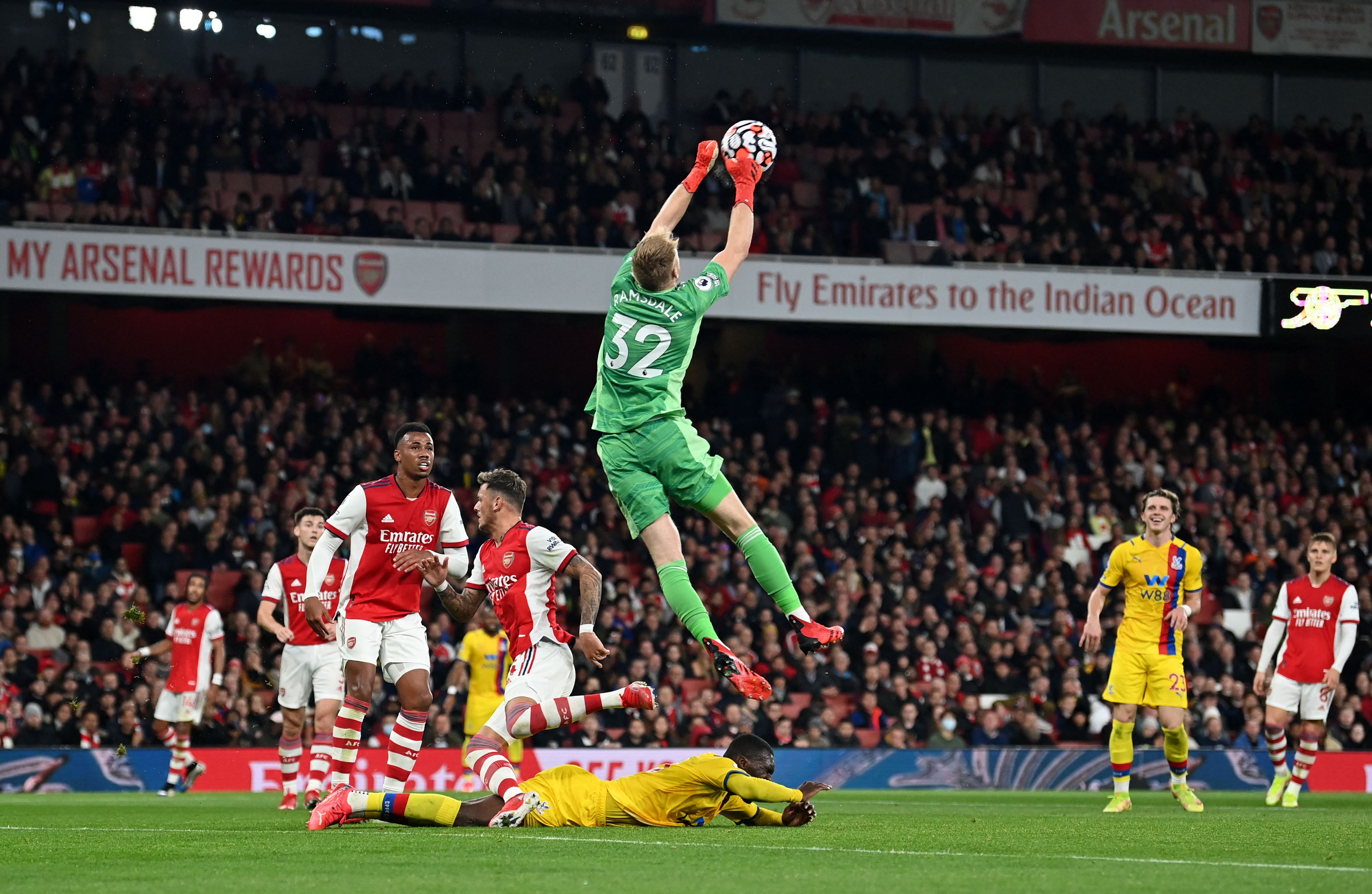 Aaron Ramsdale proved to be a busy man between the sticks for the GunnersCredit: AFP

And worse was to follow in the 73rd minute when substitute Albert Sambi Lokonga was dispossessed by Gallagher and as Arsenal backed off Edouard hammered his shot past Ramsdale into the roof of the net.

Lacazette drew a sharp save from Guaita and Kieran Tierney smashed one against the underside of the bar as Arsenal tried to force a late equaliser.

But just when Palace thought they were going to cling on, Lacazette pounced from close range to earn an ill-deserved reprieve for an Arsenal team going nowhere fast.