CAOIMHIN KELLEHER was Liverpool’s spot-kick hero as the Irish keeper sent his side through to the final four of the Carabao Cup.

Kelleher saved twice in the shoot-out, including the vital sudden death effort from Ryan Bertrand, as Jurgen Klopp’s side came back from the brink of an exit to beat Leicester. 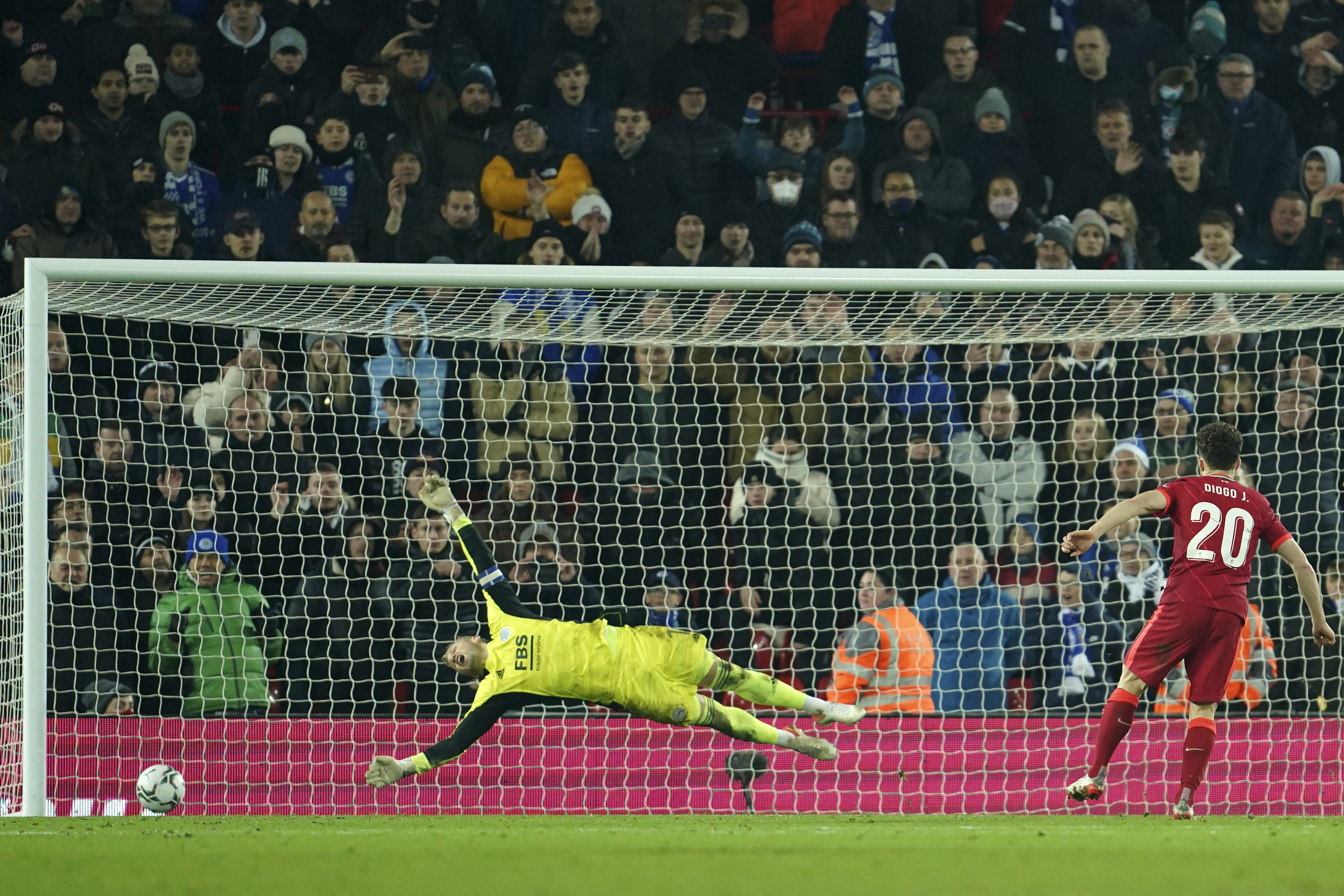 Diogo Jota scored the winning penalty as he fired low into the bottom left cornerCredit: AP

The Foxes blew a 3-1 lead as Liverpool scored an equaliser through Takumi Minamino five minutes into stoppage time to send the quarter-final to penalties.

Kelleher, 23, thought he had done enough when he kept out Luke Thomas’s effort top leave Minamino with the task of scoring the final penalty to win the tie.

But the Japan star blazed his effort over, sending it into sudden death where defender Bertrand’s low shot was too weak. This time Diogo Jota made no mistake to win the tie.

The fact Liverpool scraped through was more down to the spirit of the players and Leicester suddenly imploding than anything boss Klopp had done.

He will point to players like Jordan Henderson, Alex Oxlade-Chamberlain and Roberto Firmino in the team but the message was loud and clear to his squad with Mo Salah and Sadio Mane not even on the bench.

It meant Leicester attacked the game like a team who knew the match was there for the taking – and they raced into a two-goal lead in no time. 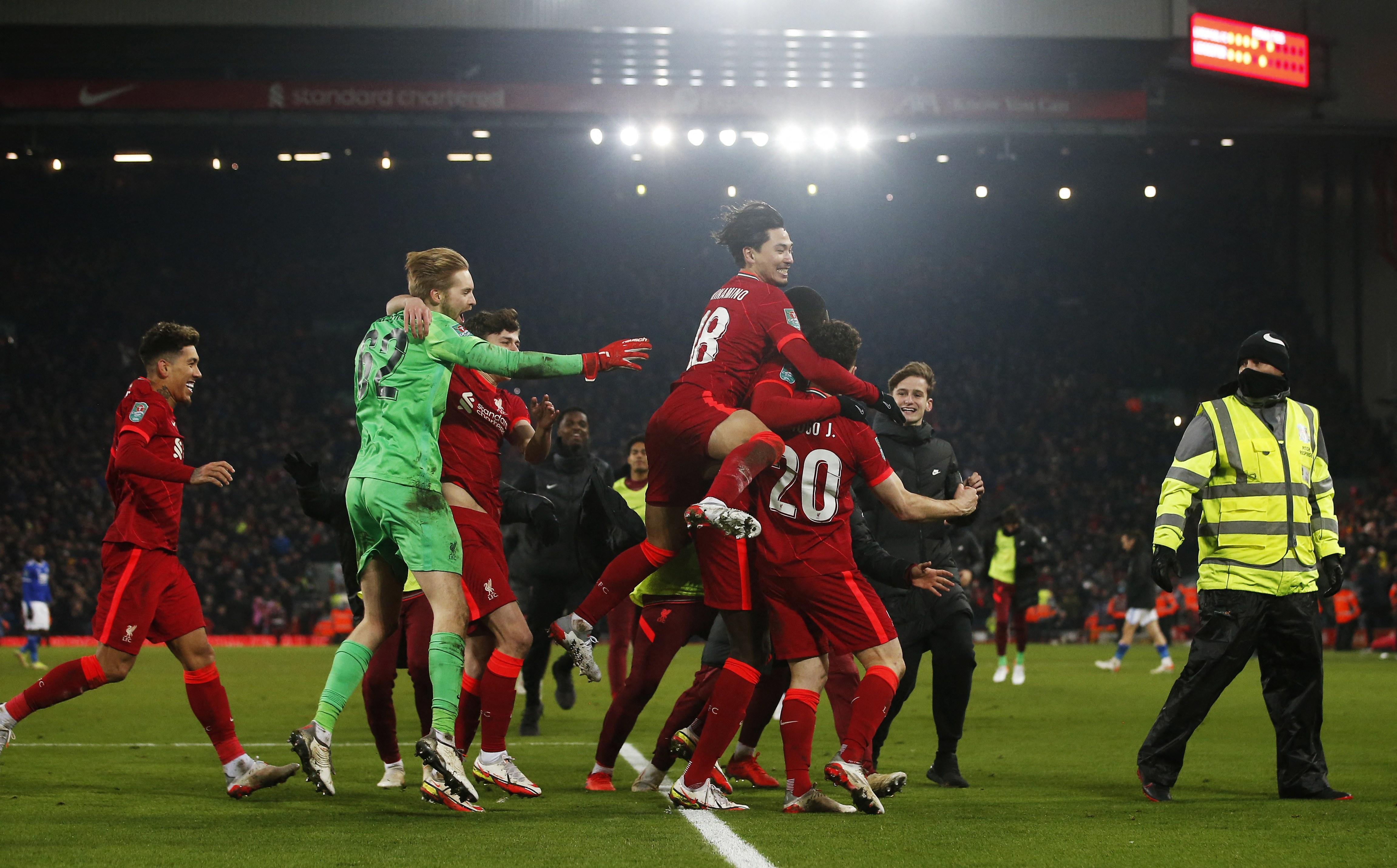 Liverpool celebrated wildly after securing their place in the Carabao Cup semi-finalsCredit: Reuters

The warning signs had already been there when Kiernan Dewsbury-Hall released Patson Daka down the side of the Liverpool defence only to be denied by a smart Kelleher save in the fifth minute.

Liverpool’s weakness through the middle of defence, where Joe Gomez and debut-making Billy Koumetio were all at sea, was their undoing on nine minutes.

Maddison released Vardy in down the side of Koumetio and the veteran dispatched his low show across Kelleher into the bottom corner.

Three minutes later Leicester doubled the lead as again the Reds were opened up by a ball from midfield, this time from Dewsbury-Hall, releasing Daka who squared for Vardy to touch home.

Liverpool were being exposed by their manager’s poor team choices, but in fairness to the players they dug deep to find a way back into the game on 19 minutes.

Firmino, making his first start in two months, controlled the ball eight yards out and rolled a pass into the path of Oxlade-Chamberlain to fire into the bottom corner from just inside the area. 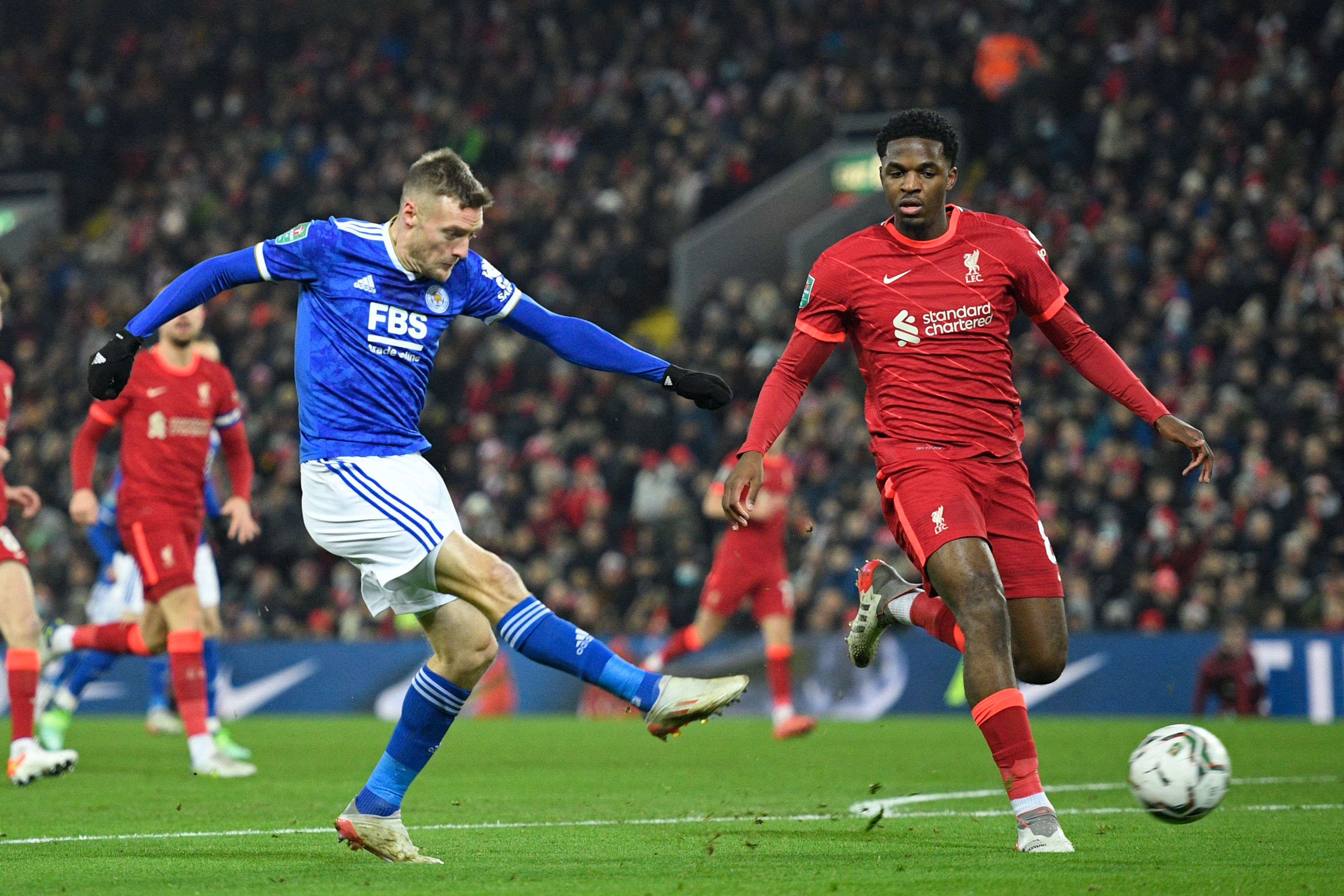 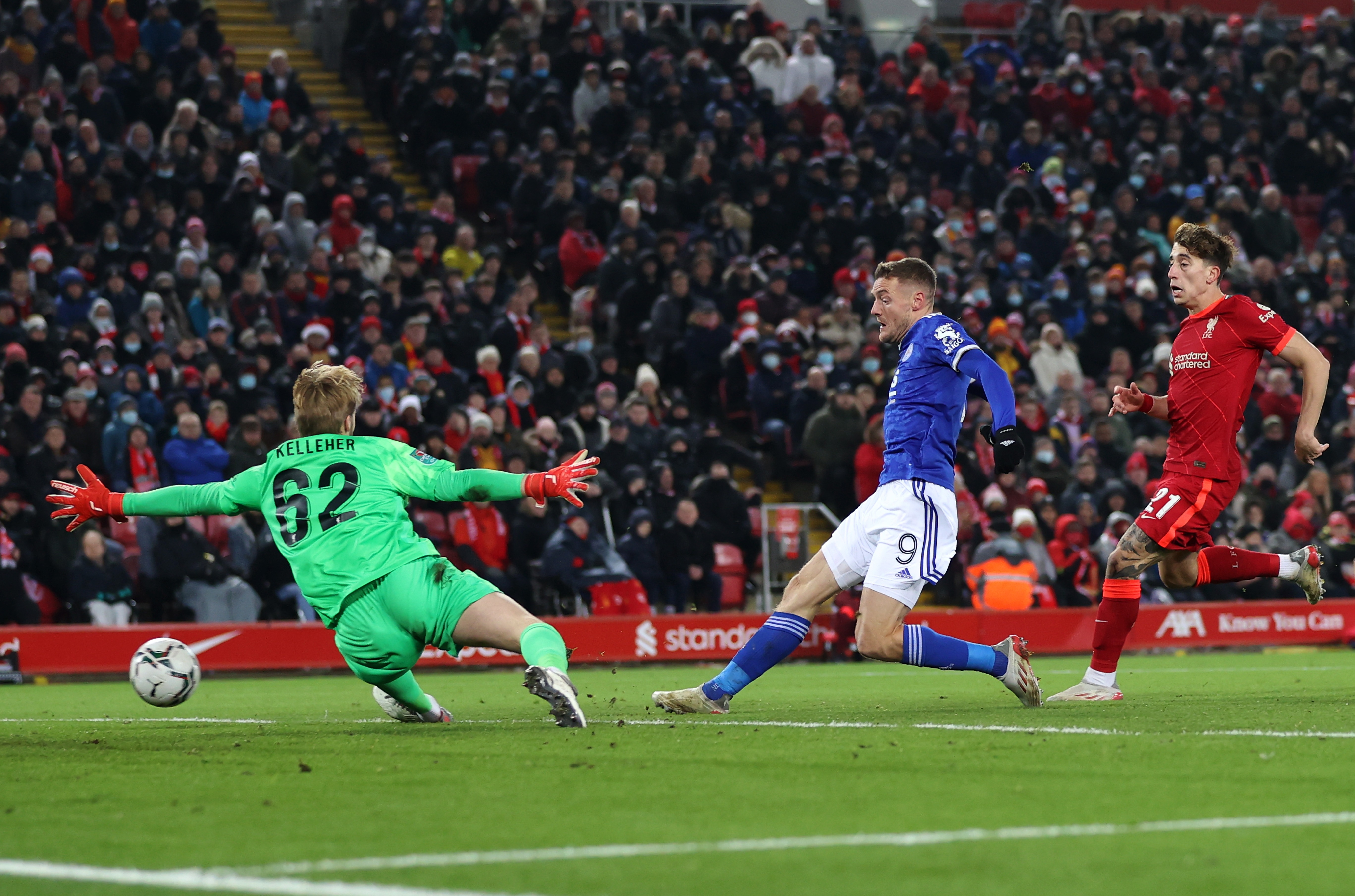 Foxes ace Vardy then grabbed his second goal against Liverpool in the 13th minuteCredit: Getty 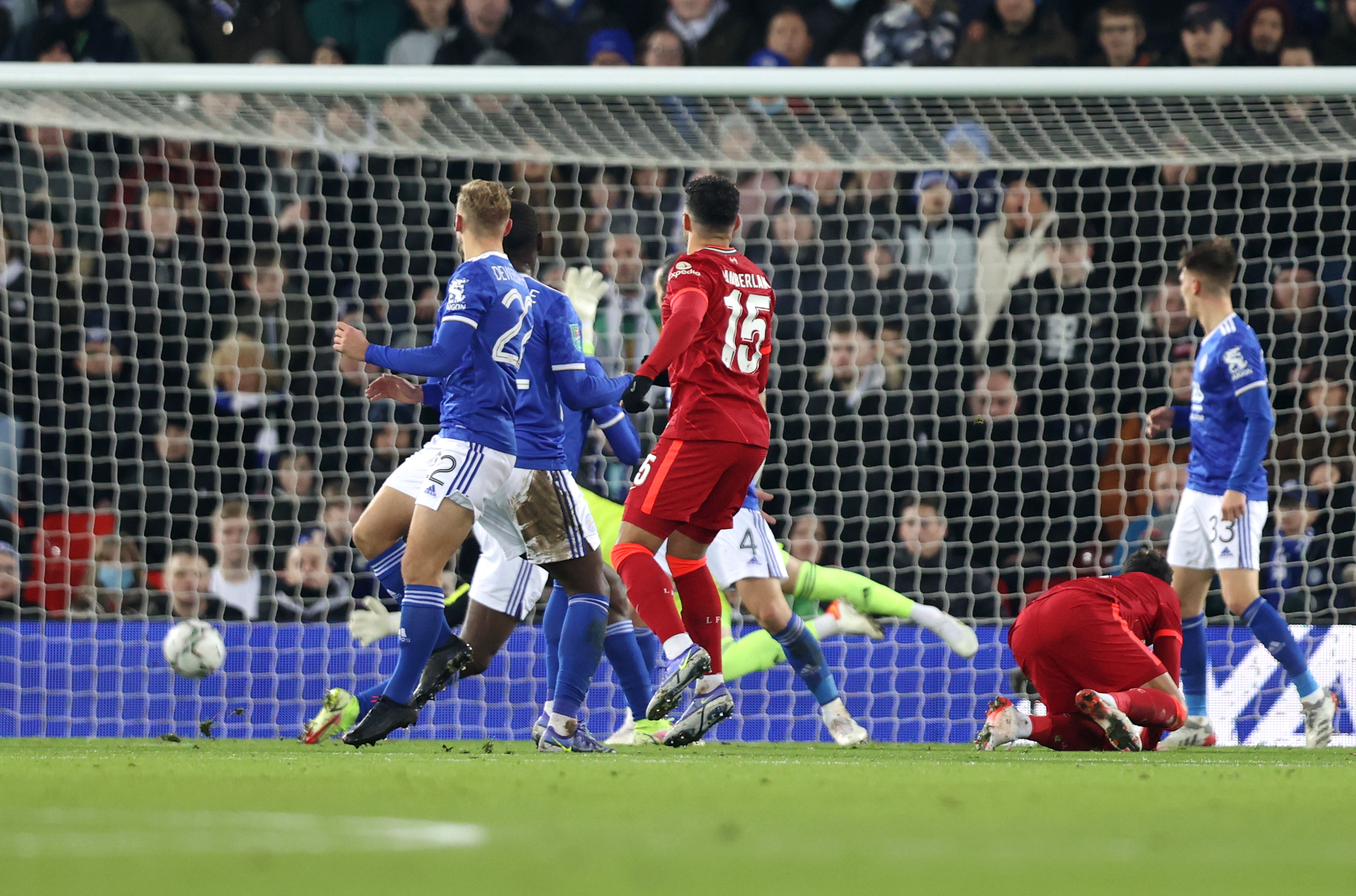 Suddenly the Anfield crowd found their voice and got behind the young side, sensing an unlikely chance to get back on level terms.

But that optimism was snuffed out in blistering style by an absolute belter of a third goal for the Foxes.

There looked little danger when Maddison collected possession 30-yards out, but the midfield took a couple of strides forward and unleashed a thunderbolt into the back of the net with Kelleher stunned in the Reds goal.

Then Vardy wasted a golden chance to wrap up the tie before half-time when he pinched the ball off Gomez to race clean through, but saw his shot cannon back off the post.

With still only a two-goal deficit, Liverpool sensed a chance and only a desperate late block from Caglar Soyuncu denied them an equaliser – and for his troubles the defender tweaked a hamstring and had to go off.

Belatedly Klopp threw on some more recognised quality in the shape of Diogo Jota and Naby Keita – while at the same time Rodgers was deciding to ring the changes himself by making four subs. 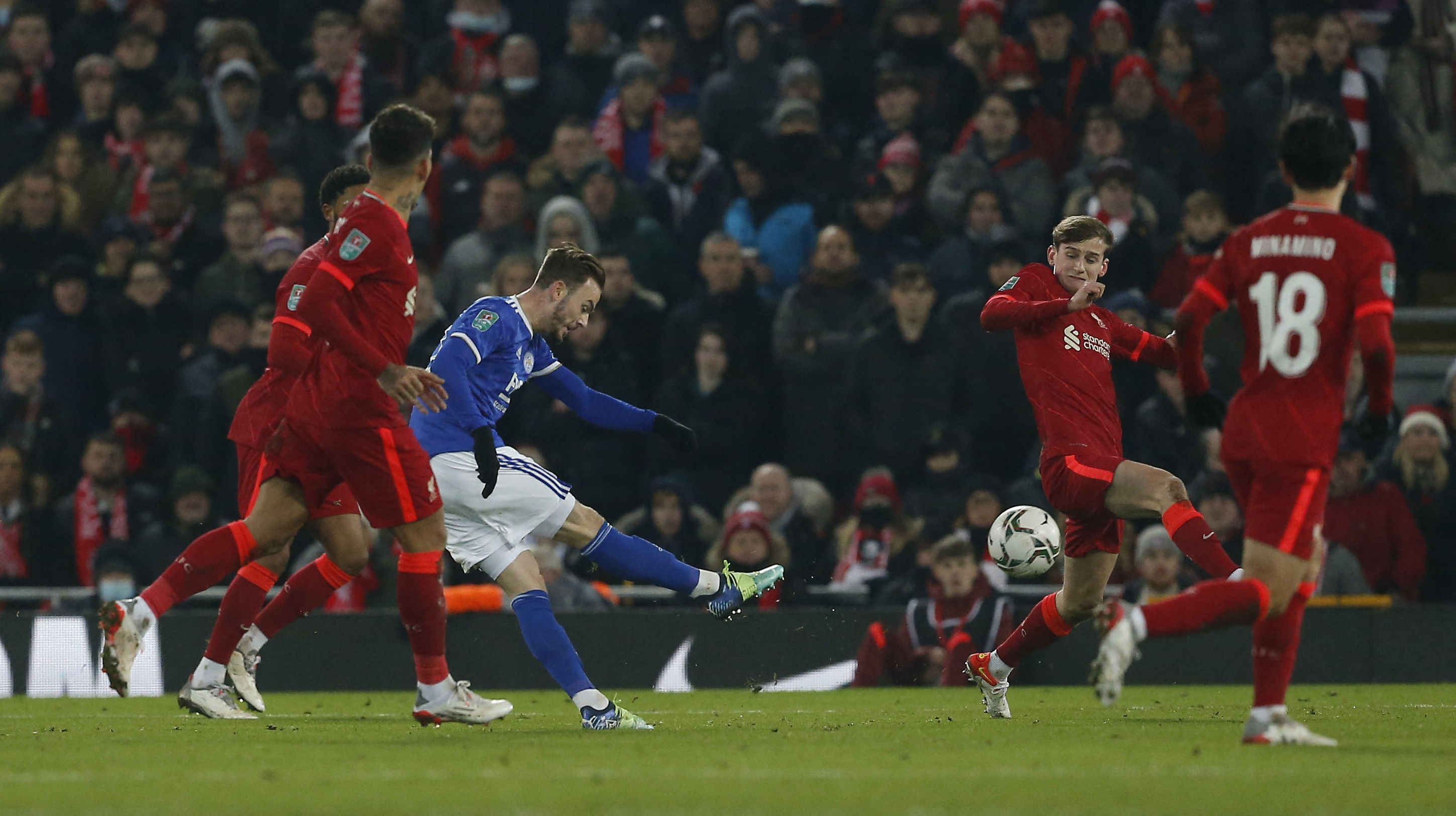 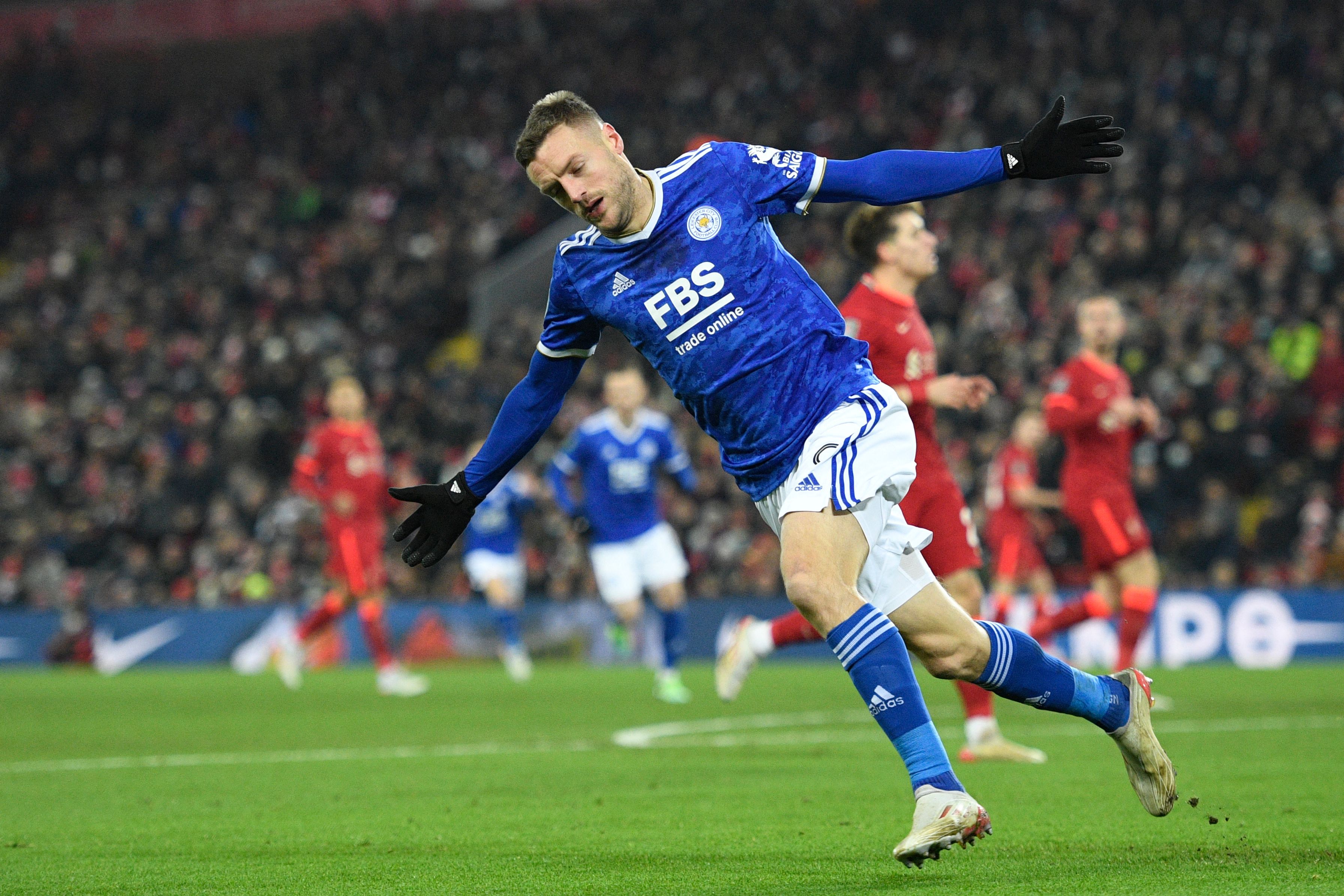 Vardy proved to be a menace in Merseyside as he tormented the Liverpool defenceCredit: AFP 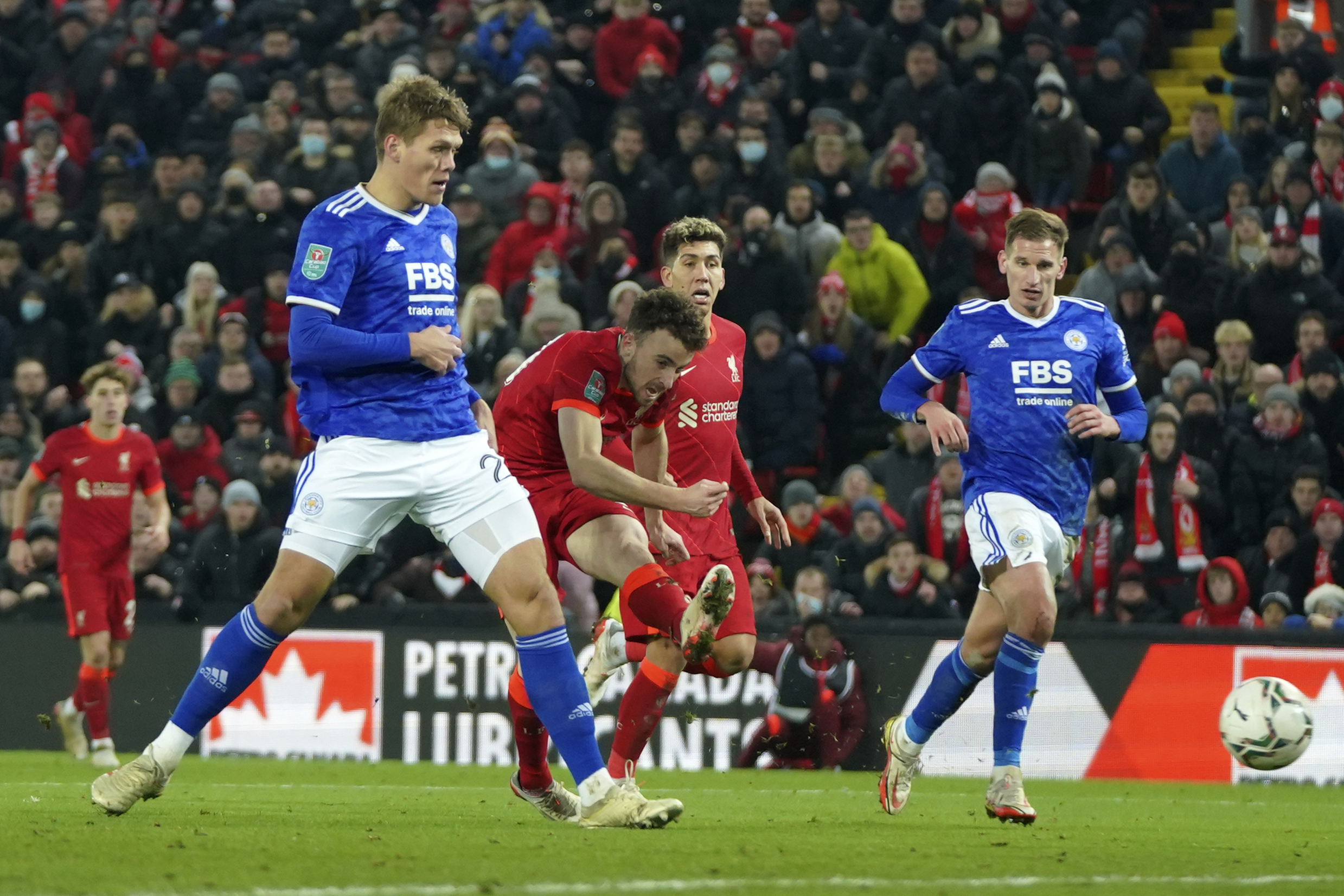 This time it was Rodgers who was the guilty manager of trying to be too clever, as on 68 minutes his side were caught napping as Jota latched on to Minamino’s ball to draw the Reds back to within one.

The ascendancy had been handed over to Liverpool and they threw every they had at trying to scramble an equaliser, though without creating any clear cut opportunities.

Then in the fifth minute of six being added on for stoppage time, Liverpool suddenly snatched the equaliser with Minamino got in behind the defence to fire low into the bottom corner and leave Leicester shattered.

Liverpool will now face Arsenal in the last four, with the first leg to be played on January 3 at the Emirates, with the second leg to take place a week later. 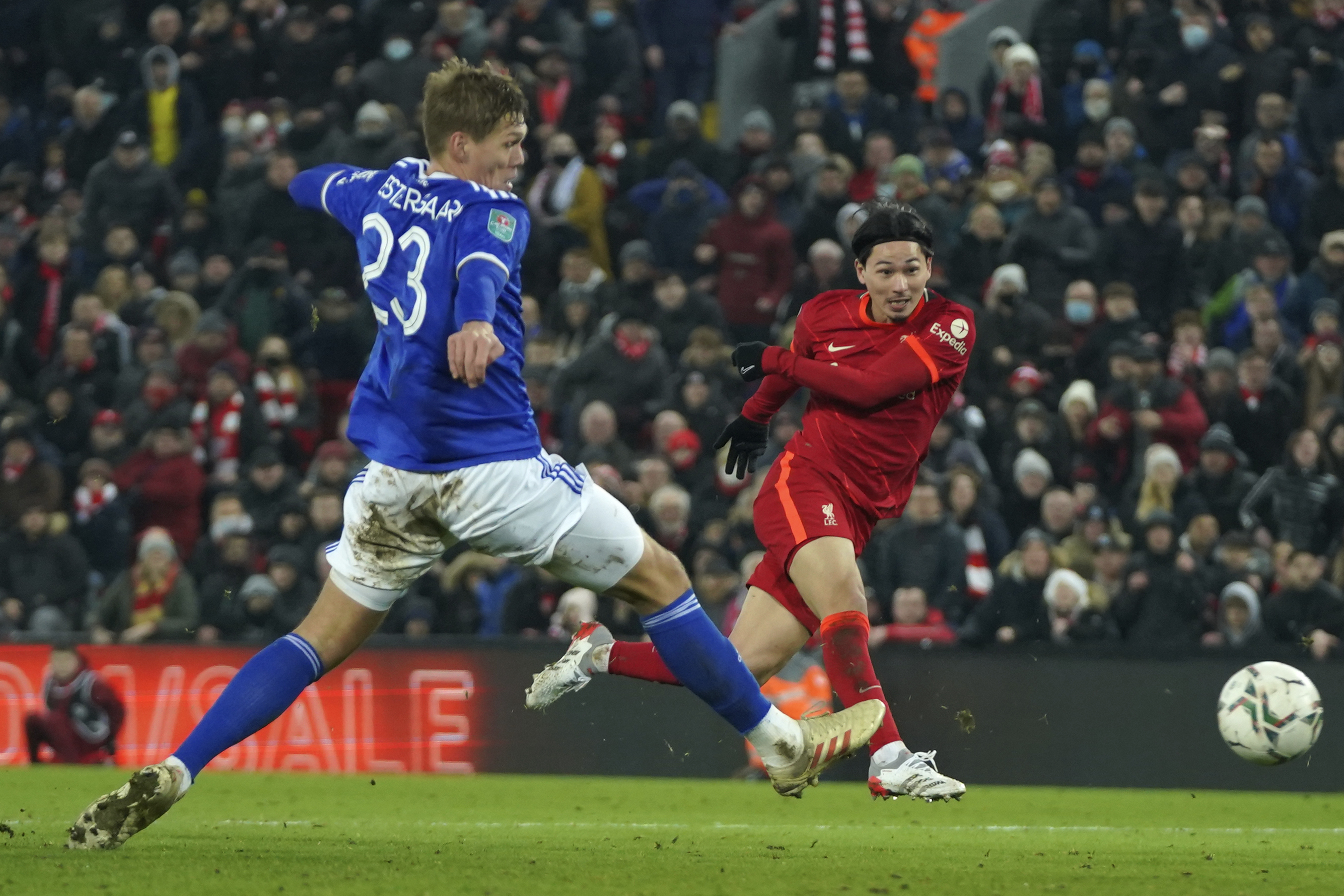 Japan international Takumi Minamino sent the game to penalties after equalising in the 95th minuteCredit: AP 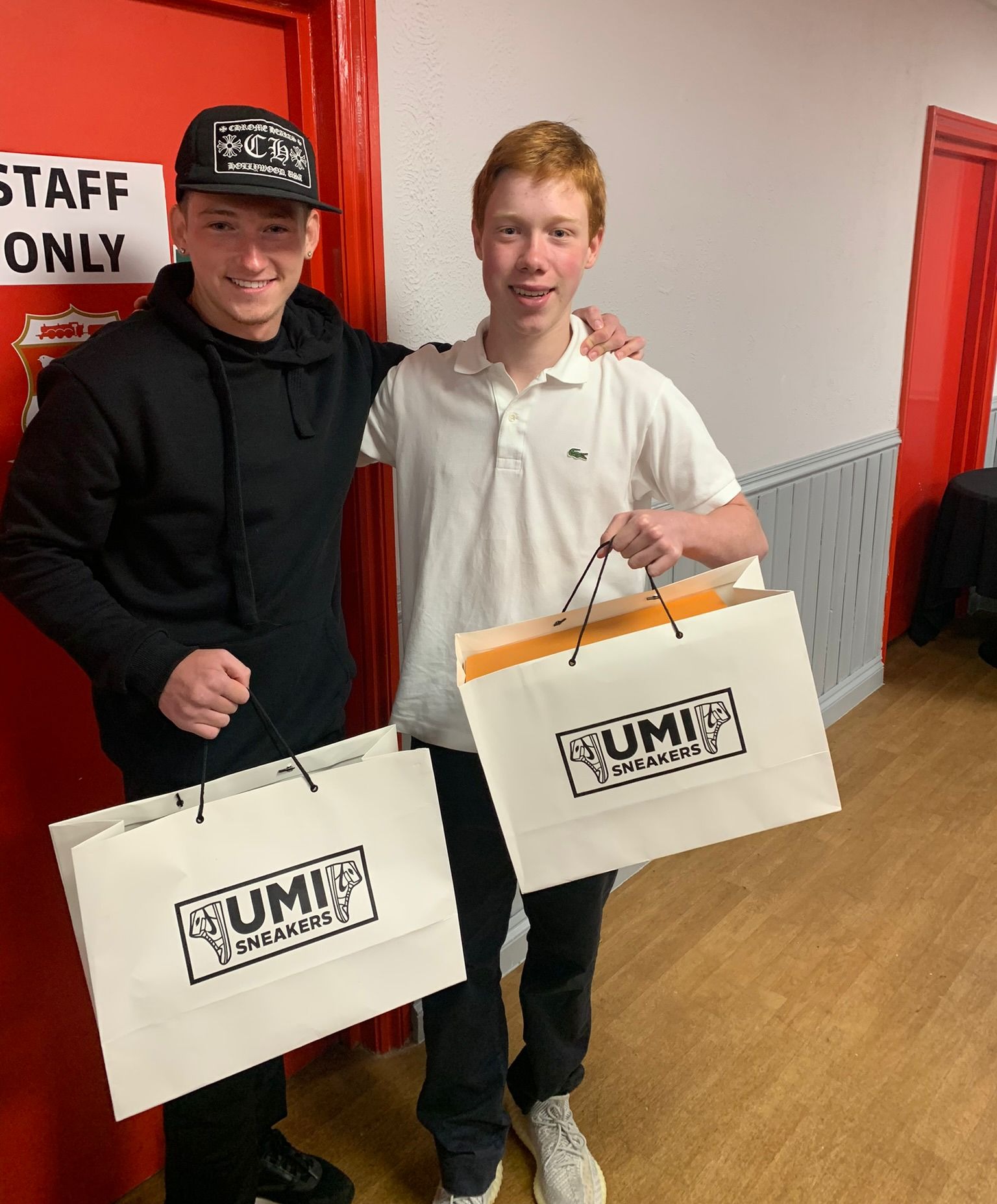