JACK WILSHERE eventually came off the bench to try and light up Danish football.

But not before a 10-minute floodlight failure threatened to wipe out his long-awaited comeback.

Jack Wilshere made his debut for Aarhus on Friday nightCredit: AFP 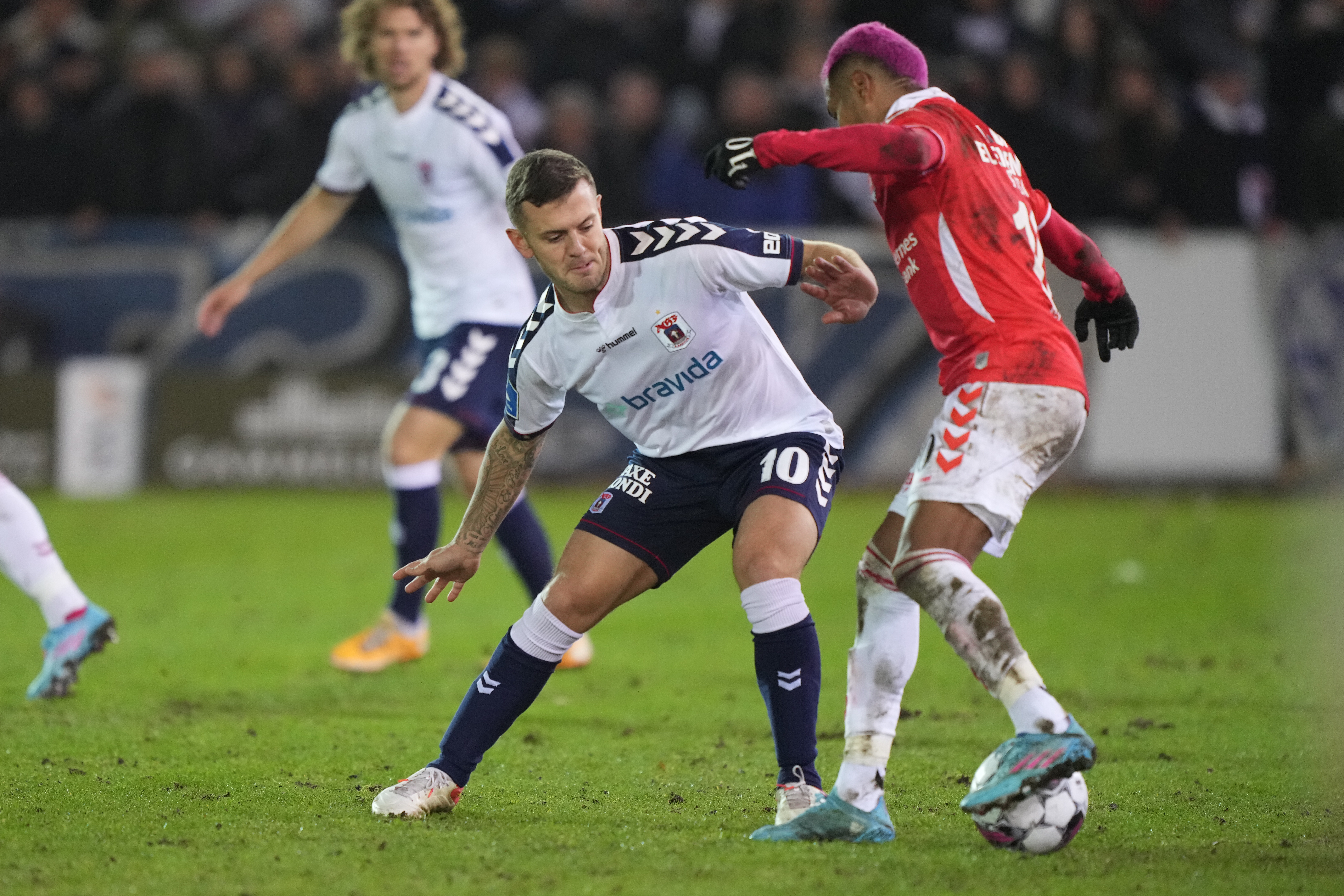 The former Gunners midfielder came off the bench in a shock defeatCredit: EPA

However there was a much bigger shock to the system lying in wait for the biggest new name in Danish football, after rock-bottom Vejle spoiled Wilshere’s debut party with a 100th-minute winner.

Vejle striker Mouhamadou Drammeh cashed, six minutes from the end of a crazy night to steal the show as the hosts won for only the third time in 19 attempts this season.

Talk about a late Drammeh!

Wilshere’s first taste of Danish football turned into something of a farce after a career spent gracing glamour grounds from the Nou Camp to New York.

Lowly Vejle, started the night rock-bottom of the 12-team Danish Superliga and hot favourites to drop – but you think someone might have made sure they had enough Krone handy to feed the meter.

Wilshere patiently waited for his big moment – 284 days after his last appearance for Bournemouth – when the lights went out 90 seconds into the second half and referee Jakob Sundberg ordered both teams back indoors.

After a 10-minute absence, they re-emerged with Wilshere hauling his snood right up over his nose to protect himself from the bitter cold – or perhaps to mask what he really wanted to say about the untimely cock-up.

It’s safe to say Vejle’s  humble 10,200-seater Vejle Stadium was about as far removed from the Emirates as Wilshere could get.

Although when the lights went out it was difficult to tell.

Then with exactly 89 minutes and 50 seconds on the clock the former Gunner came on to a roar from the travelling Aarhus fans – for SIXTEEN MINUTES of stoppage time.

Not even Sir Alex Ferguson managed to pull that one off in Wilshere’s Arsenal heyday.

However it has to be said he looked decidedly Spursy – in a retro-Hummel Tottenham-style kit from the late 80’s, early 90’s.

The sight of former Gunners great Wilshere in white shirt, navy blue shorts and socks, might have been enough to make even the most hardened Arsenal fans a little queasy.

But there was nothing easy-peasy about the 34-times-capped England midfielder’s introduction to the Danish Superliga.

Vejle seemed every bit as inspired as their Aarhus rivals to unexpectedly have a Premier League superstar land in their midst.

And they stunned even their own small band of fans by coming from behind twice to earn a rare victory as the Wilshere effect appeared to bring out the best in Vejle.

Wilshere had to wait three minutes for his first touch but it was a beauty as he laid back a perfect left foot pass for Frederik Brandhof to blast wide.

Then had to leap into the air to avoid being clattered by Vjejle’s pink-haired forward Allan Sousa.

However despite the defeat he showed his class by exchanging shirts with Vjele’s delighted skipper Denis Kolinger ….. after 106 mad minutes.