THIS was no Milan masterclass.

But Celtic could do with learning some classic Italian Catenaccio defending. 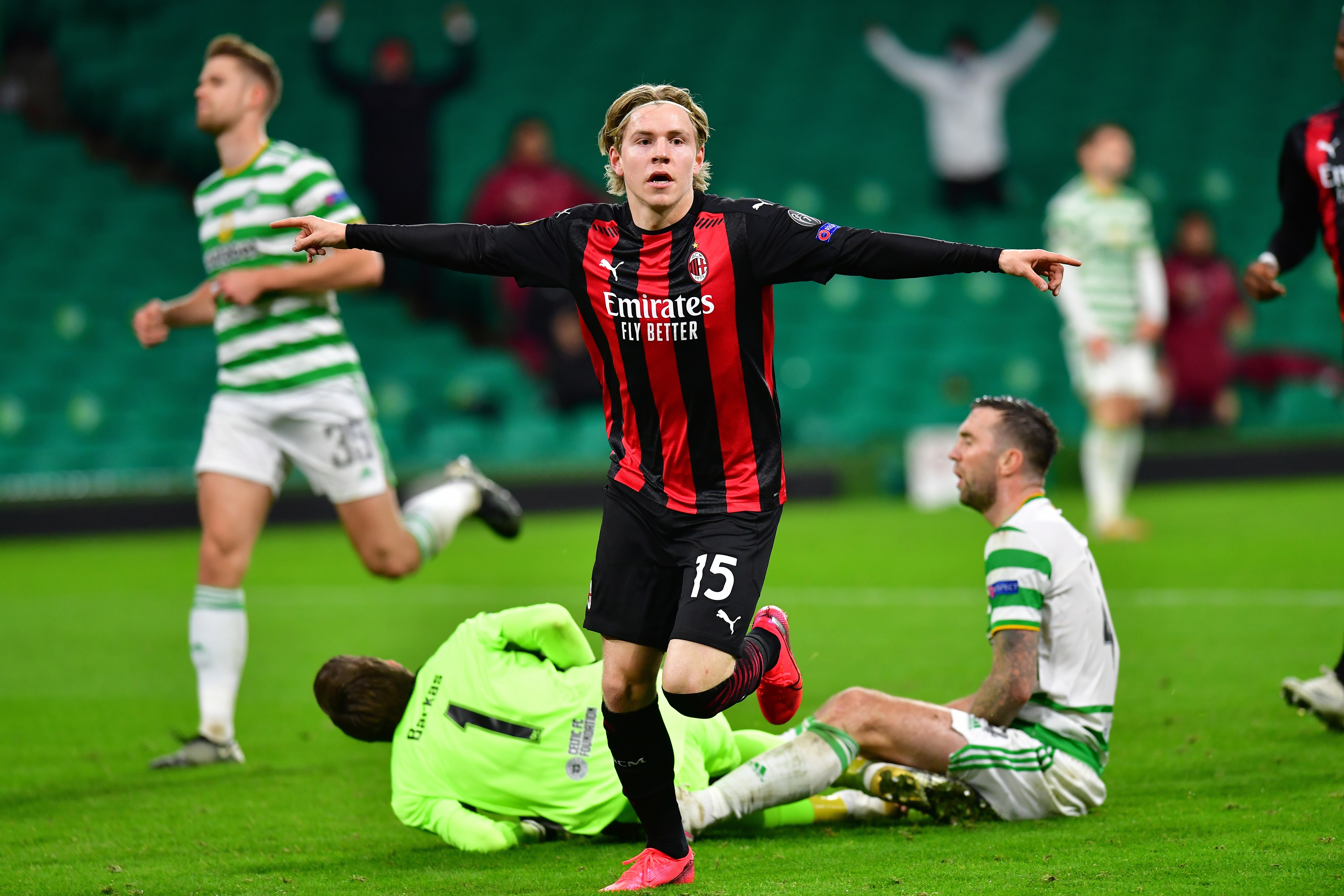 The Hoops managed to keep Zlatan Ibrahimovic at bay.

But Neil Lennon’s side gifted three goals to the Rosseneri in this Europa league clash.

Just like the goals they conceded to Rangers these three were agonisingly hard to watch for the Hoops boss.

Mohamed Elyounsoussi then netted Celtic’s goal with 15 minutes to go to give Celtic’s supporters hope in front of the TVs. 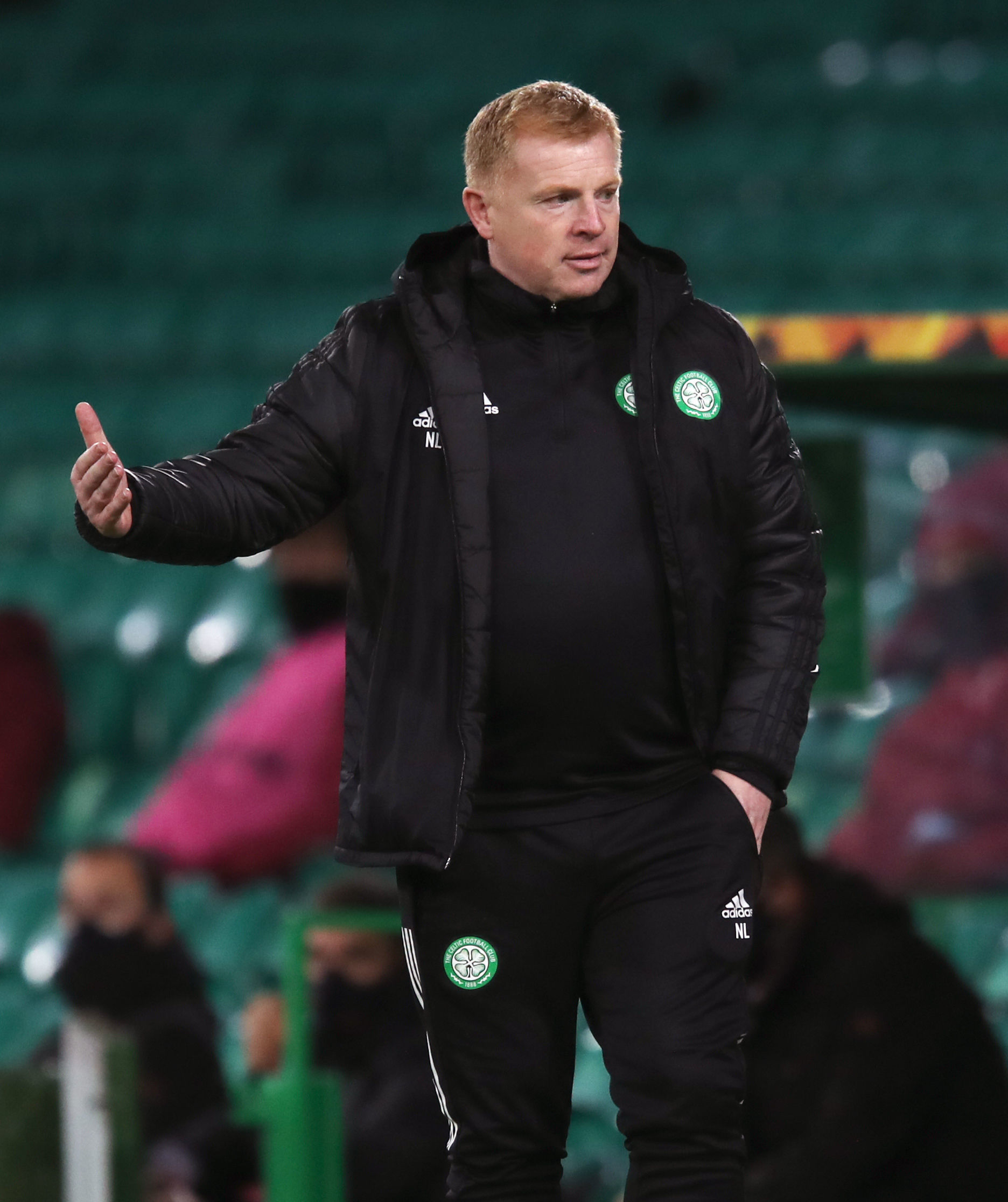 But with Neil Lennon’s side pushing for a late, last gasp equaliser Jens Petter Hauge sealed the victory.

It was the right result in the end after this 90 minute tussle given the way Celtic tried to keep Milan at bay.

Lennon is fast becoming a man under pressure but he went into this game with no thoughts of winning friends and influencing people.

Many Celtic supporters question the wisdom of the 3-5-2 formation he prefers.

But if they thought it was going to get ditched for the start of this European tie they were wrong.

What Lennon couldn’t avoid after Saturday’s lacklustre performance against Rangers was a change in personnel. 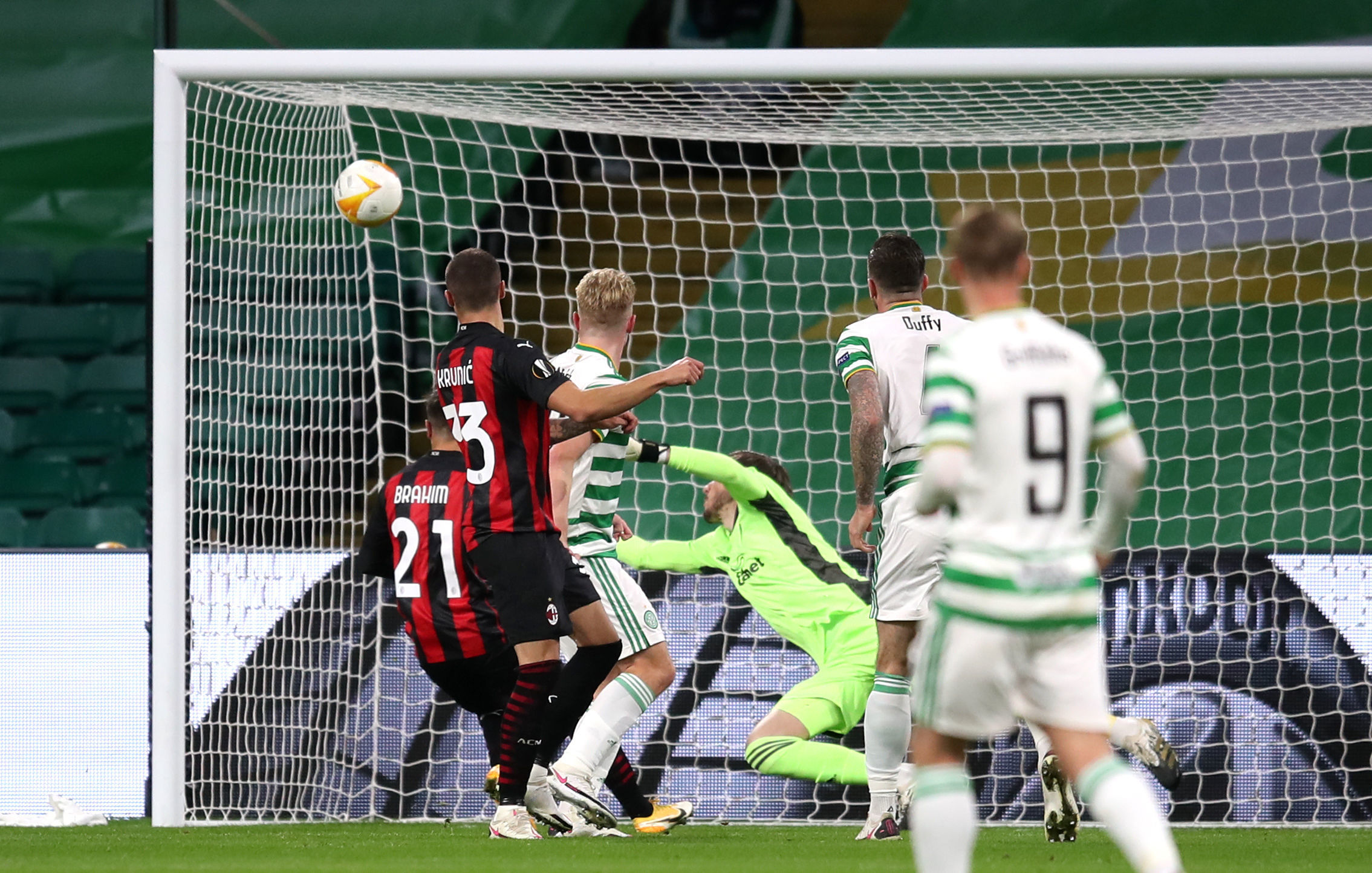 He could have dropped any of his starting eleven and none of them could have had any complaints.

As it was he made two alterations with Patryk Klimala and Elyounoussi dropping to the bench.

In Klimala’s case he was lucky to get a spot there.

In came Leigh Griffiths to lead the line with Albian Ajeti playing just off him.

In fairness to the Swiss striker, his hold-up play for spells of this game wasn’t the worst. He did his best to bring others into the action.

The problem was that there wasn’t any runners getting beyond him. The ball ended up being recycled with Milan allowed to get set.

Any time Jeremie Frimpong beat his man his cross let him down.

There was an initial lack of creativity too. 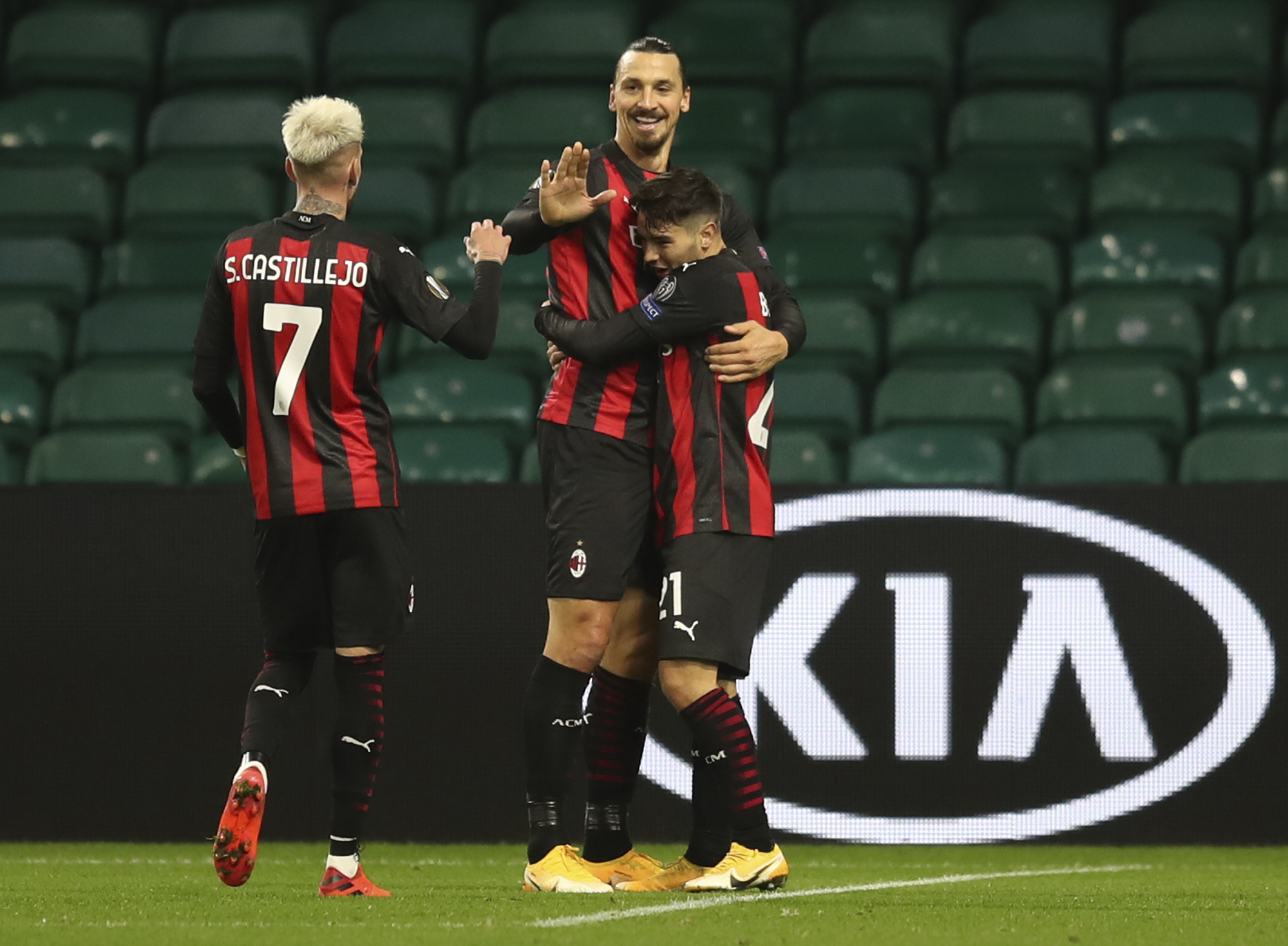 That’s something supporters would have hoped would come from Ryan Christie but surprisingly he didn’t start despite being fit and available.

Maybe that was a signal that Lennon had one eye on Sunday’s trip to Aberdeen for what’s a vital league game.

When it comes to the Milan team these days, it’s not the star-studded side of years gone by.

There’s the guy who would say sore thumbs stick out like Ibrahimovics.

And goalkeeper Gigio Donnarumma, who looks like being Italy’s No1 for the next decade or two.

But there’s been a different way of thinking at the club as they scour Europe for the best young emerging talent.

They were even interested in Celtic’s Kris Ajer before the last transfer window shut and you can bet there were moments here when the big Norwegian centre back wished they’d signed him.

Celtic’s defending at the two first-half goals they conceded was just asking for trouble. 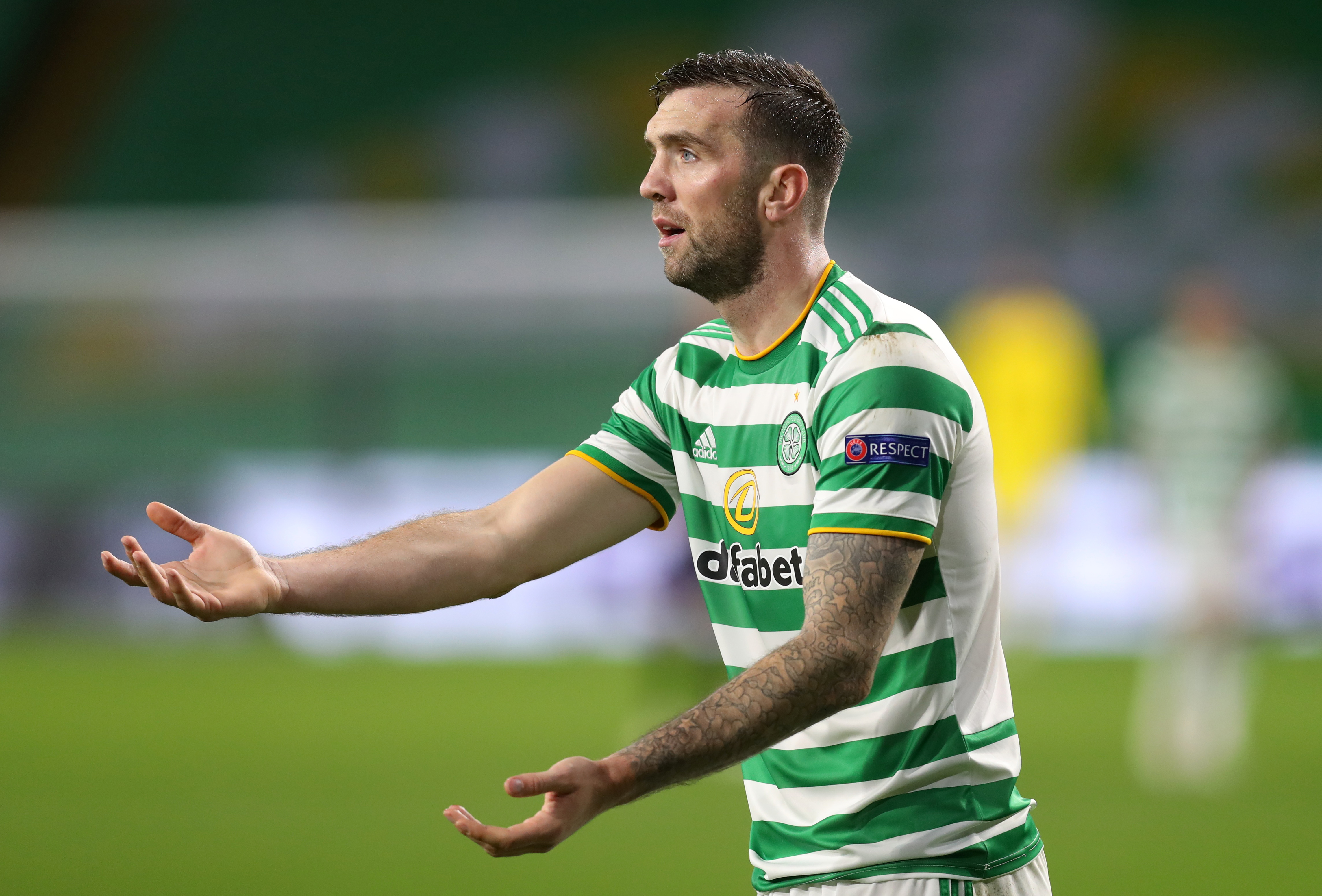 You just can’t defend like Celtic did in the first half and expect to get away with it.

Milan’s first goal in just 14 minutes came from a simple cross into the box which should have been dealt with by Shane Duffy. He was signed to clear precisely that sort of danger.

But he misjudged his jump and Krunic was free to nod past keeper Vasilis Barkas. Who, it must be said, was also left looking none-too-clever yet again.

Milan went into cruise control after that with Ibrahimovic showing his class all over the pitch.

Celtic kept needlessly giving up possession with unforced errors and it only seemed a matter of time before Milan scored again.

When it arrived, once again it was so avoidable. 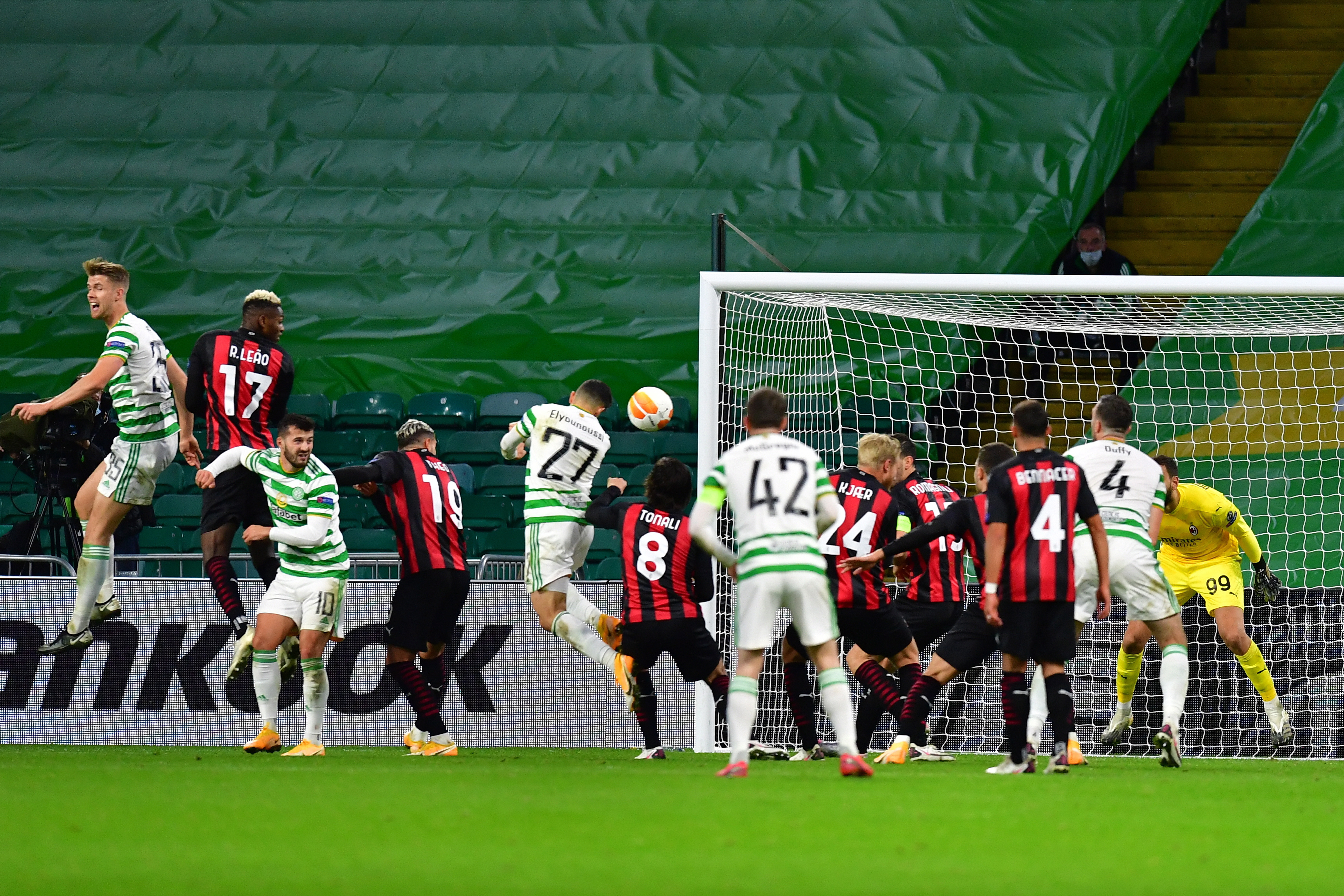 Elyounoussi’s header gave the Hoops a glimmer of hopeCredit: EPA

Ibrahimovic played a ball down the left which Theo Hernandez burst onto. He then found Diaz who waltzed between Duffy and Callum McGregor before drilling a low shot past Barkas. Who stood rooted to the spot. Again.

Lennon had real work to do at half-time just to inject some confidence into his side.

But by switching to a back-four – and bringing on Christie and Elyounoussi for Griffiths and kid defender Stephen Welsh – the team definitely had a better look to it.

Milan dropped off the game. They were confident they’d be able to handle anything Celtic threw at them.

But there was much more intent from Lennon’s side in the second half. Laxalt fired a shot over the top before Elyounoussi tried his luck from distance.

Seeing Ibrahimovic subbed after 65 minutes also didn’t do them any harm with Milan seemingly thinking the game was over.

Lennon made further changes with skipper Scott Brown going off and Tom Rogic thrown on. And Celtic went for it.

When they made it 2-1 there was still 15 minutes left to play. Elyounoussi’s goal – a straight forward header from a Christie corner – breathed new life into the clash.

But they just couldn’t find an equalise and in stoppage time it was Milan who netted the game’s fourth goal.

Duffy was left in Hauge’s wake as he burst through on goal before calmly slotting past Barkas.

It was probably no more than Milan deserved given their first half dominance but still tough to take for Lennon given what his players gave him after the break.