“Without the drinking, we treated it like a lads’ holiday,” says David Edwards, laughing as he explains life inside the Wales camp at Euro 2016, and reaching the semi-finals at the country’s first major tournament for 58 years.

“Chris Coleman was adamant to everyone: ‘You’ve just got to enjoy it.’ It was about enjoying every single moment, getting a coffee together or going to play golf after training, doing stuff that was fun, and then later in the tournament we were allowed a few more drinks. It was really a group of mates who were willing to run through brick walls for each other and for their country.”

Wales certainly enjoyed themselves. A few hours before beating Slovakia in their Group B opener, the team shared their pre-match walk through Bordeaux’s city centre with hundreds of Welsh fans. In the dressing room after the last-16 victory against Northern Ireland in Paris, Joe Ledley’s snaking dance moves to the toe-tapper We No Speak Americano had everyone amused and the celebrations continued at the team hotel.

Wales fans in the stands celebrate the 2-1 victory against Slovakia at the Stade de Bordeaux. Photograph: Martin Rickett/PA

Players’ families had been invited to revel in the moment, with the Football Association of Wales footing the bar tab. Players turned fans for the night, changing Will Grigg’s on Fire, Northern Ireland’s unofficial anthem that summer, to Chris Gunter’s on Fire. “Everyone was singing into the early hours of the morning, on top of chairs and tables, singing songs about our own players,” says Edwards. “It was amazing.”

In their second group game, they spied a sense of fear in England when they duelled in Lens, but Wales were free of expectation and full of belief. It would be crass to reduce a superb achievement to team spirit but Wales’s motto is “Together Stronger” and those involved five years ago consider the off-field camaraderie a crucial factor.

Most players had played together for more than a decade, including Gareth Bale, Aaron Ramsey, Joe Allen and Gunter, four of eight survivors from that squad. Many had played together as teenagers, through the age groups under Brian Flynn, the former under-21s manager, and then in the first team under John Toshack and the late Gary Speed.

“A lot of the credit needs to go to John Toshack,” says Edwards. “As unsuccessful as we were in that era, he blooded so many youngsters and gave them that experience and that’s what came to the forefront when we got to the qualifying for 2016. A lot of the lads got 30 or 40 caps at a young age. Gunts is on 101. Wayne [Hennessey] is not far behind him [on 95].” 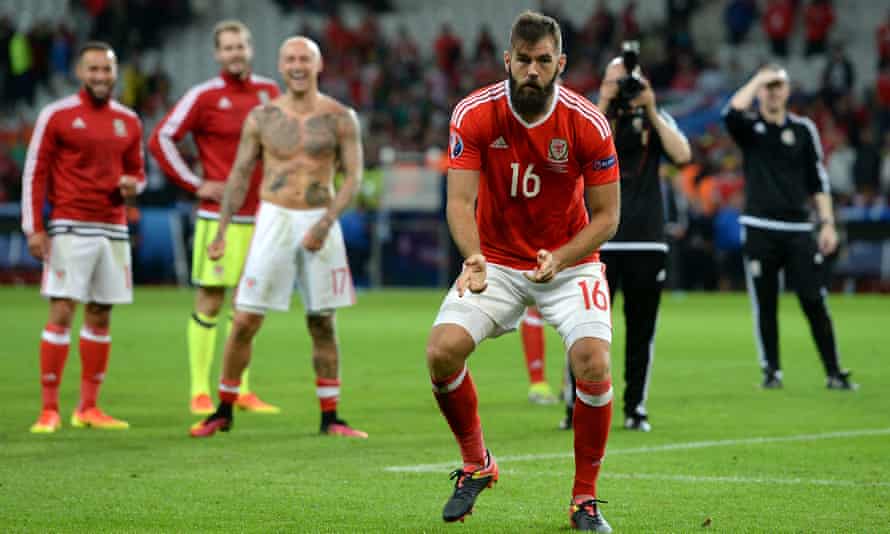 Wales now face the same task as Leicester: how do they possibly repeat their heroics of 2016? Andy King was part of the team that lifted the Premier League title against all odds and he played for his country against Portugal in the semi-finals in France two months later. “There were a lot of similarities, the togetherness of the team, people working together whether they were playing or not playing,” King says of Wales and Leicester.

“I came in off the back of winning the league, so was on cloud nine anyway. It was one of the best times of my life. It was such a whirlwind that it was always going to be hard to try and get that feeling back again after that summer.

“When I speak to Riyad [Mahrez] now he says winning the Premier League was best the first time. Myself, Gunts, Wayne, Rambo [Aaron Ramsey] … that group had been together a long time. We had many years of failing, failing, failing and so it was an amazing feeling.

“I remember I said: ‘If Leicester have won the league, there is no reason Wales cannot win the Euros.’ I remember people laughing. But it was not that far off that in the end.” 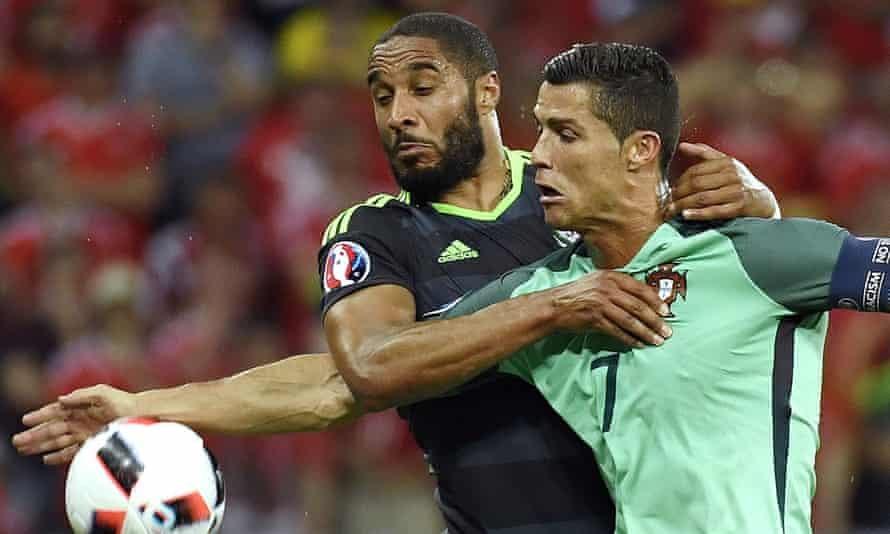 At the team base in Dinard, a town on the Brittany coast, they spent many an evening setting up table tennis tournaments, quiz and movie nights, prank calls and even kangaroo courts.

The unity behind the scenes helped create a cloak of invincibility on the pitch. “Even in a couple of years prior to that [tournament], whenever I played a game in that team, I never felt like we were going to lose,” says Taylor. “That was just a feeling we had with that team. We were playing so well, we could trust everyone, we were very good at keeping clean sheets … and we also knew that we had a world-class player.

“Portugal were very similar in how they won the tournament. They set up in a very pragmatic way, they were quite defensive but knew: ‘We’ve got somebody that if we get chances, it’s goals.’

“I don’t mean to downplay it but that is essentially how Portugal won the tournament, because they played to their strengths. We did exactly the same thing. In 2016 we have to be talking about [Bale] being in the top three players in the world at the time. He was on the pedestal with [Lionel] Messi, [Cristiano] Ronaldo.”

Before Bale joined the Wales squad for a pre-Euros training camp on the Algarve, his teammates watched Real Madrid’s Champions League final against Atlético, willing him on. They recognised Bale was their golden ticket at the tournament.

“If we had a free-kick 25 yards out and he didn’t score, in my head it was like he had just missed a penalty because I’d see him put them in in training all the time,” says King. “I’d be thinking: ‘How’ve you missed? It’s that easy for you, just score.’ He did against Slovakia and against England.” 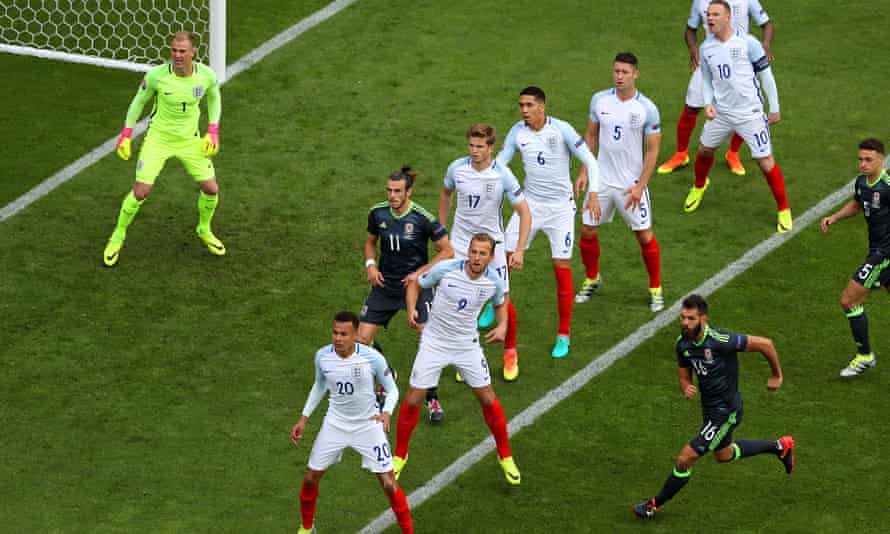 England players defend a free-kick during the group match at Lens, where Wales led 1-0 but lost 2-1. Photograph: Owen Humphreys/PA

They lost 2-1 to England but Coleman washed away any lingering frustration. “He said: ‘Right, lads, tomorrow morning there is no training, just have a lie-in and we’re going out for lunch,’” says King, who still harbours hopes of playing for his country again. “The manager took us down to a burger restaurant by the beach and while everyone was gutted, we left there thinking: ‘Yep, we’ve put that behind us now, it’s still in our hands and if we win our next game, we are still going to qualify.’ We ended up topping the group.”

Rivals have been thirstily trying to discover the secret to their success and in 2018 England poached Wales’s performance psychologist, Ian Mitchell, one of several of Coleman’s backroom credited with creating a relaxed and enjoyable environment.

“We all got unbelievable at table tennis by the end of it,” says Taylor. “There were doubles games going on. Jonny Williams fancied himself a bit and the staff were playing a lot, including the gaffer [Coleman]. We could’ve done with three or four tables. Sean [Connelly], the [lead] physio, was probably the best. He was good.”

During lockdown last year BBC Wales aired reruns of those matches at Euro 2016 and there was a virtual reunion of sorts, with King, Ledley, Allen, Ashley Williams, Sam Vokes and James Chester among those taking their Uefa A licence through the FAW, on a course run by Carl Darlington.

Last year, it was a case of online seminars and not celebrations with the “Red Wall”. “We were on it 9am-4pm most days,” says King. “Tayls was quite good, his presentations were a bit more professional than the rest of us.”

Even when it came to the end of the road in France, losing to Portugal in Lyon, Coleman was quick to remind his players of their achievements. There was disappointment at defeat – “The buildup to that game was probably the first time where we let ourselves think: ‘We could win it here,’” says Edwards – but instead of moping they spent the next afternoon reflecting on their journey on the hotel terrace, the reality of it all still sinking in. Together, they discussed the importance of such feats not being a “one-off” and the FAW has since invested in hubs across the country, including Colliers Park, Wrexham.

“They had just gone through and we were all partying together. Gareth attempted to come out but just got mobbed straight away so jumped straight back in the car and went back to the hotel. For the rest of us mere mortals, we could go out and drink.”

The following day, with some players a little worse for wear, they flew home to Cardiff, where tens of thousands of supporters lined the streets to welcome home their heroes on an open-top bus parade before a ceremony at which the Manic Street Preachers performed.

“It was something I never thought I would see. Obviously for rugby, which is a popular sport in Wales – but for football I never thought I’d see that,” says Edwards. “It was really special.”