AFTER savouring every last drop of my £13 lager at Qatar’s Champions Bar, it was game time.

With less than 100 days to go until the World Cup kicks off, I was heading for the air-conditioned Khalifa International Stadium, where England will face Iran in their opening match of the competition on November 21.

Oliver Harvey inside the Khalifa International stadium in Doha, Qatar where England will play Iran on November 21Credit: Louis Wood 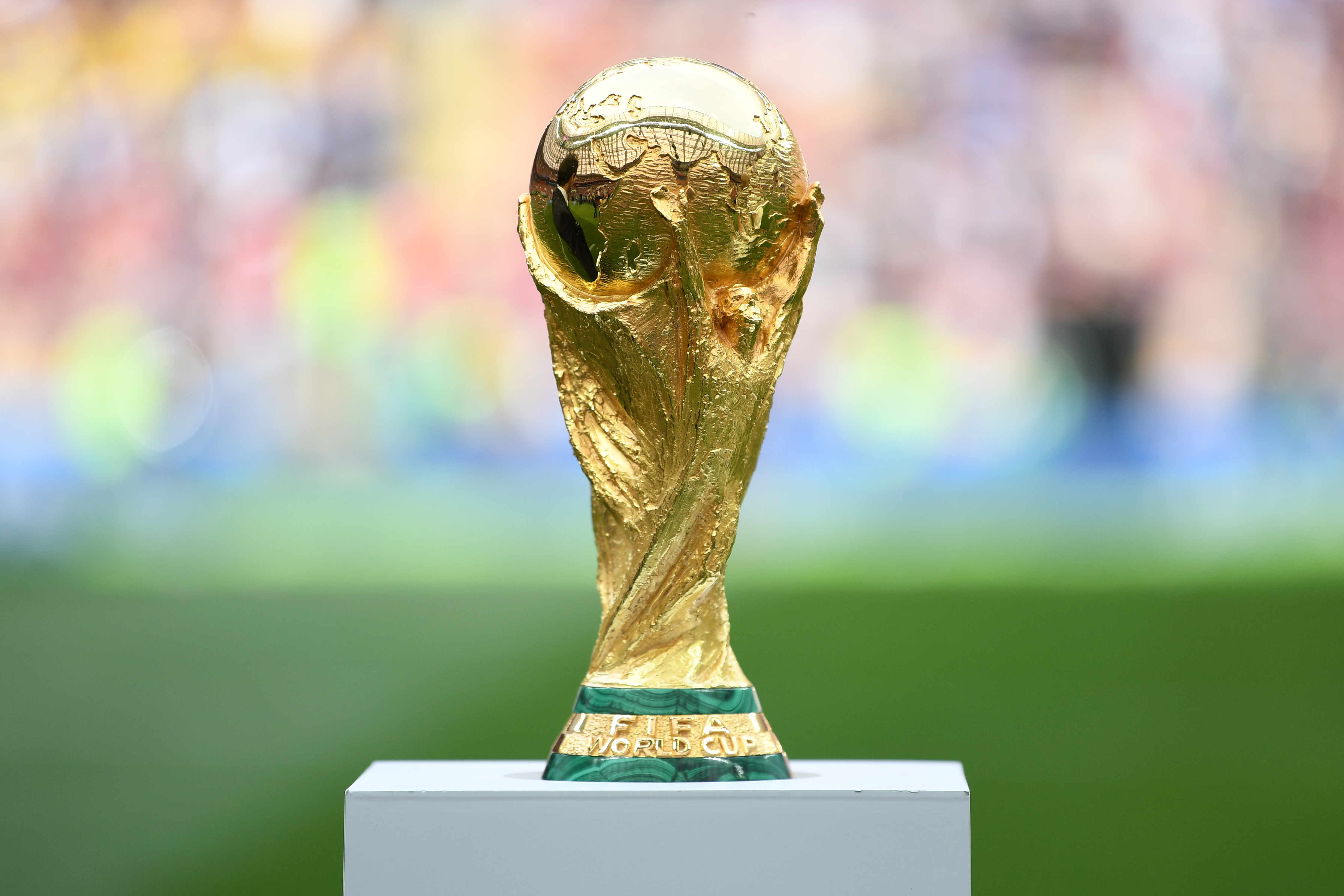 Oliver reveals that with less than 100 days before the kick-off, ‘Cultural differences with the West come into sharp focus’, pictured: the World Cup TrophyCredit: Getty

Taking the plush Doha underground to the 45,416-seat arena, cultural differences with the West come into sharp focus.

A local ushered me away from a central carriage from which he explained single men are banned.

The Metro here has three classes — Standard: Family, for women, children and accompanying men; and the lavishly-upholstered Gold.

Boozing in public is banned — apart from at top-end hotels and restaurants — so supping tinnies on the way to a match is out. This is also a land where vapes are outlawed and swearing and obscene gestures can land you behind bars.

Fatma Al-Nuaimi, — from the World Cup’s Supreme Committee, told me: “We just ask people to respect the local culture.” 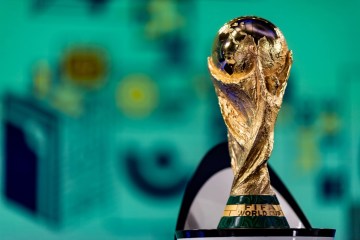 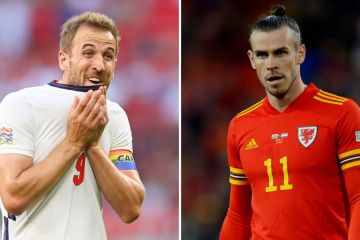 So how will this tiny desert kingdom, the size of Yorkshire, cope with as many as 1.3million fervent football fans arriving in three months?

To find out, I’ve spent this week in Qatar, road-testing facilities and grilling organisers in a nation whose poor human rights record is under the microscope.

My dummy run to the Khalifa — where local teams Umm Salal and Al Sadd were playing out a 1-1 draw — suggests the transport and stadiums will surpass many previous World Cups.

Outside it was a claustrophobic 42C (temperatures in November should fall to the mid to upper 20s) with cloying humidity making each footstep like walking through treacle.

Inside the ground it was a pleasant 26C as 500 nozzles pumped out cold air.

Chief Technology Officer Niyas Abdulrahim explained that the temperature inside the stadiums can be adjusted depending on the size of the crowd.

And he revealed that supporters will be monitored Big Brother-style, with 15,000 cameras inside the stadiums and more in fan zones. Standing before a bank of computers and monitors, Niyas said anyone misbehaving can be identified.

We have high-resolution special cameras to zoom in on a particular seat and clearly see the spectator.

He revealed: “We have high-resolution special cameras to zoom in on a particular seat and clearly see the spectator. It’s being recorded, so that will help us in any post-event investigation.” 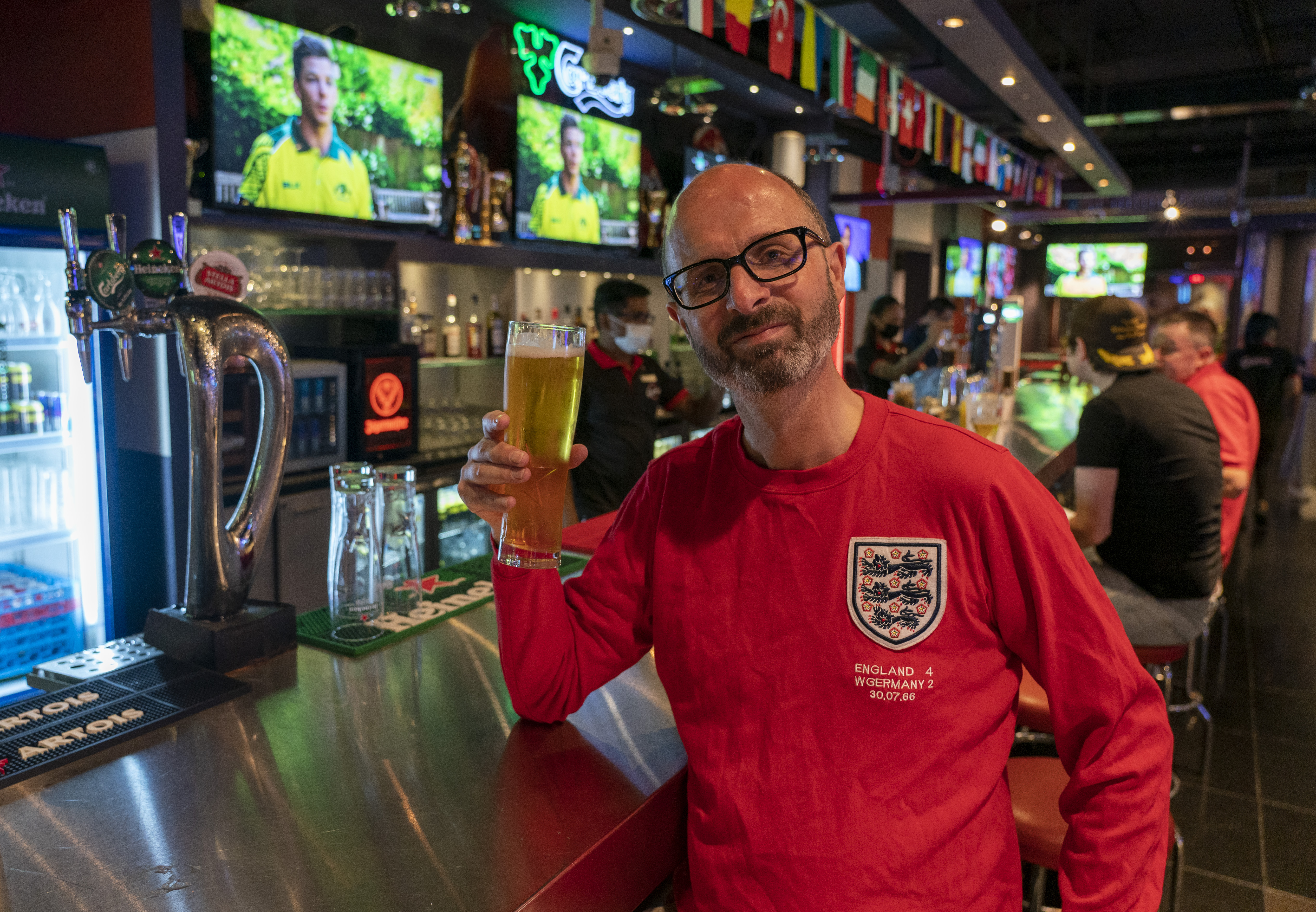 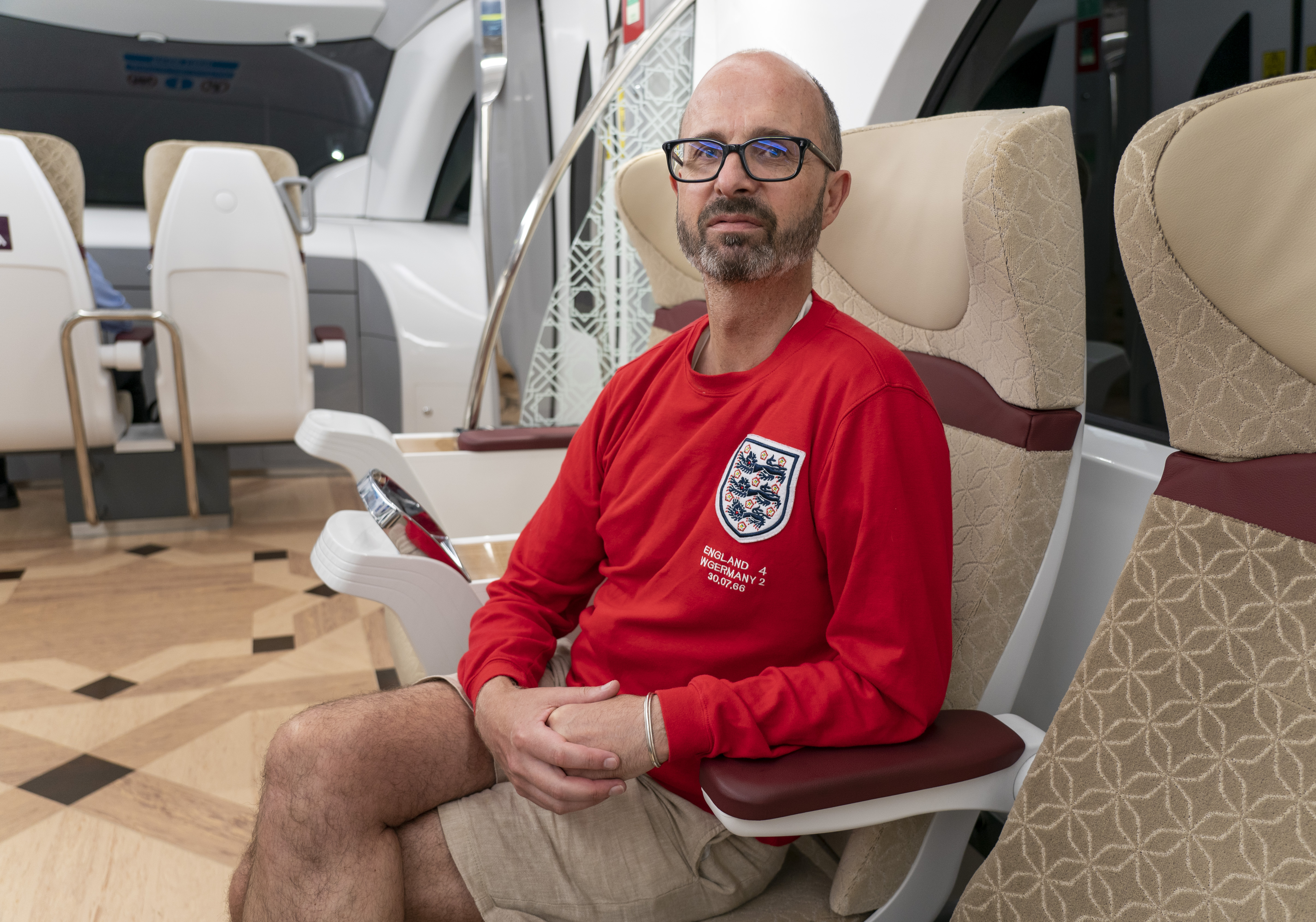 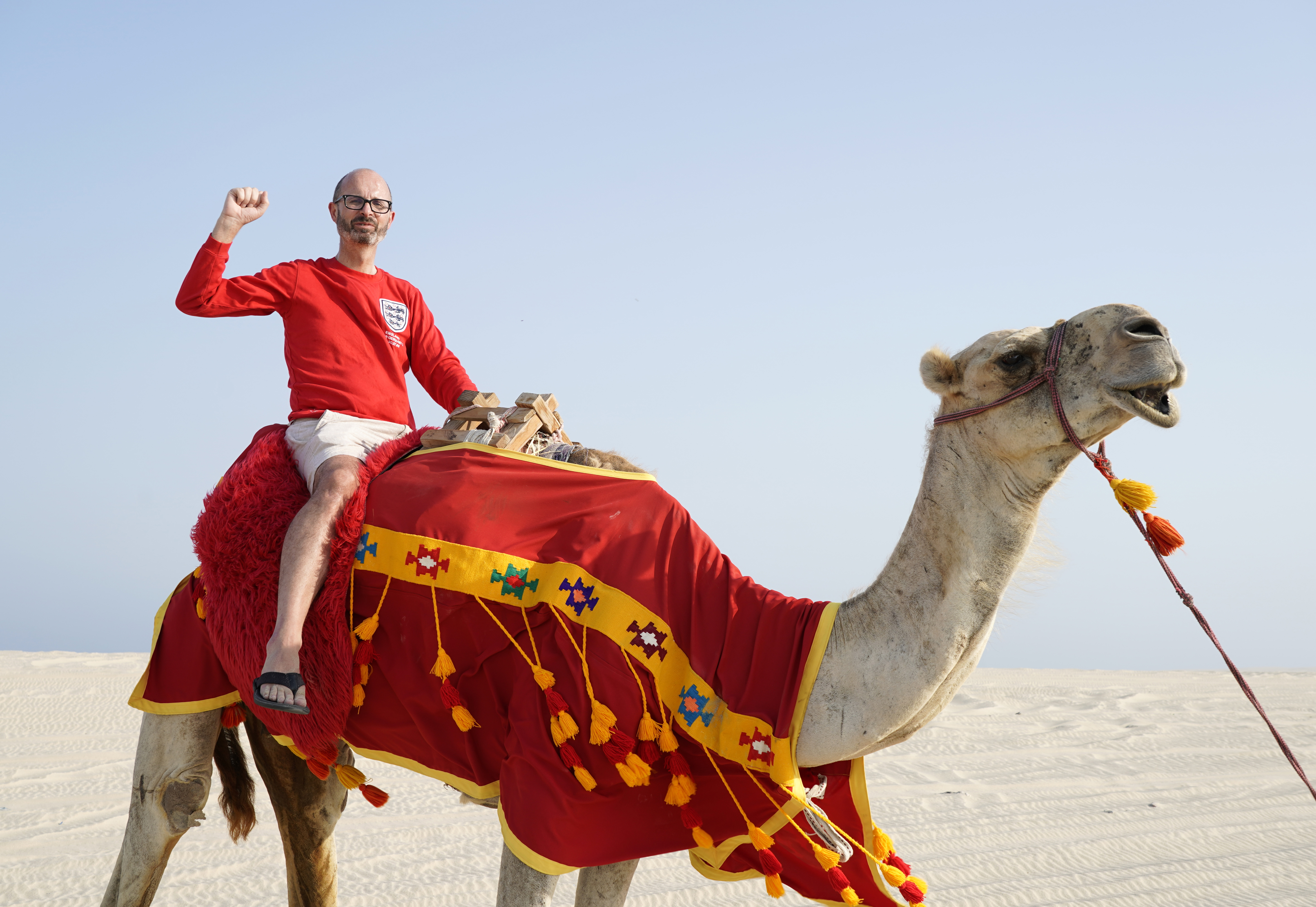 As he visits tourist attractions in the Qatar desert, England fans can experience camel rides and holding a falconCredit: Louis Wood

No decision on Covid rules for the World Cup have been announced. Currently masks are worn in public and UK travellers require a negative pre-flight PCR test.

And Qatar has yet to confirm its plans for alcohol consumption, with the Supreme Committee’s Fatma Al-Nuaimi saying booze will be available “in designated areas”.

She added that events such as the Club World Cup in the country in 2019 — won by Liverpool — proved a successful trial run. “We have welcomed Liverpool fans in a fan zone that was serving alcohol before and after the match,” she said.

The eye-watering alcohol prices in Qatar’s licensed hotel bars and restaurants won’t be replicated in the fan zones. A source at the organising committee assured me supporters will be able to sup pints for around £5.

Gleaming Doha — a city of steel and glass rising out of the desert — will hold a giant World Cup party at its four-mile waterfront Corniche promenade.

England’s wags are rumoured to be staying on a luxury cruise liner moored in the warm Gulf waters, where they will be able to enjoy a glass of bubbly.

Their other halves will check into the dry five-star Souq Al Wakra beach resort, ten miles up the coast. When I visited this week, attentive staff provided a golf buggy ride from reception to the hotel’s decent restaurant to beat the searing heat.

Lamb couscous cooked in a clay pot is £15 while signature drinks include the tomato juice-based How Bazaar, a steal at £7.

England boss Gareth Southgate has chosen a location which will immerse his players in local life.

While downtown Doha resembles London’s Canary Wharf in a sandstorm, the honey-coloured warren of low-rise streets at Al Wakra has a Middle Eastern charm.

Next door to the hotel a mosque’s minaret rises and there is a children’s park, complete with two camels which may prove irresistible for an England photocall. On the other side of the hotel a beachside pathway leads to a tangle of shops and cafes in the souq, or street market.

The rear of the hotel opens directly on to golden sands and the lapping waves of the Persian Gulf.

Wales will stay in Doha’s brand new five-star Delta City Centre hotel, which is due to open in October. Fans can experience their own Arabian nights, sleeping in beachside camps.

I took a hair-raising 4×4 sand dune-bashing tour south of Doha, where bedouin are waiting to offer camel rides and falconry displays. At the Regency Sealine Camp, luxury glamping tents hug the shoreline. Weekday prices start from around £190.

Later I met Omar al-Jaber, whose job it is to find accommodation for more than a million visiting World Cup fans. He revealed a “caravan city” — costing from around £120 a night per mobile home — is being constructed in central Doha to help take the strain.

Omar insists plenty of accommodation is still available to British fans yet to make a booking, the cheapest being flats near Al Janoub Stadium for under £70 a night.

Other options include £170-a-night Portakabin-style buildings and two luxury cruise ships — the MSC Poesia and the MSC World Europa — which will be moored at Doha’s Grand Terminal.

The liners boast swimming pools, spas and an array of restaurants, with prices starting at around £150 a night. England superfan Brian Wright and four friends have booked 22 nights on a cruise ship.

Brian, 51, who has been to more than 370 Three Lions games and is heading for his eighth World Cup, said: “We booked before the draw and are paying just £60 a night.”

We booked before the draw and are paying just £60 a night.

UK fans will need to acquaint themselves with local customs and laws in a conservative Islamic nation.

Coventry City fan Brian added: “Whatever country I visit, I respect their laws and abide by them. It won’t stop me having a bloody good time.”

Scanners at Doha Airport detect anyone trying to sneak booze or drugs into the country.

Qatar really isn’t a place where you want to fall foul of the law. The US State Department said there were 375 cases of court-ordered floggings, for various offences, in 2019.

The last known Brit to receive the punishment was Gavin Sherrard-Smith, from Cheltenham, Gloucs. He was lashed 50 times with a bamboo cane in 1993 after he was found guilty of selling alcohol to a Muslim.

Gavin, who denied the charges, said: “The last ten strokes were agony, bloody agony. I thought I was going to pass out.”

Qatari organisers assured me that everyone is welcome to the tournament — yet the LGBTQ+ Travel Safety Index ranks the nation at 190th in the world.

Homosexuality is illegal here and punishable by up to three years in prison.

Some of the Wales team’s staff, as well as members of the Rainbow Wall — its official LGBTQ+ supporters’ group — will boycott the tournament over the country’s stance on gay rights.

Built on sweat and blood

The organising committee’s Nasser Al-Khori told me: “When it comes to LGBT everyone is welcome as long as there are limitations around PDA (public displays of affection).

Public intimacy between any couple, regardless of gender, can lead to arrest.

The gleaming stadiums and other infrastructure that have risen from the sand have been built on the sweat — and sometimes blood — of an army of occasionally mistreated migrant workers.

The Qataris say they responded by improving health and safety and overhauling migrant employment laws.

Spokeswoman Fatma Al-Nuaimi said the changes “will be the true social legacy that the World Cup will leave”.

As the sun dips below the horizon, Doha twinkles in a kaleidoscope of lights and chrome.

The World Cup in the desert will certainly be a tournament like no other. 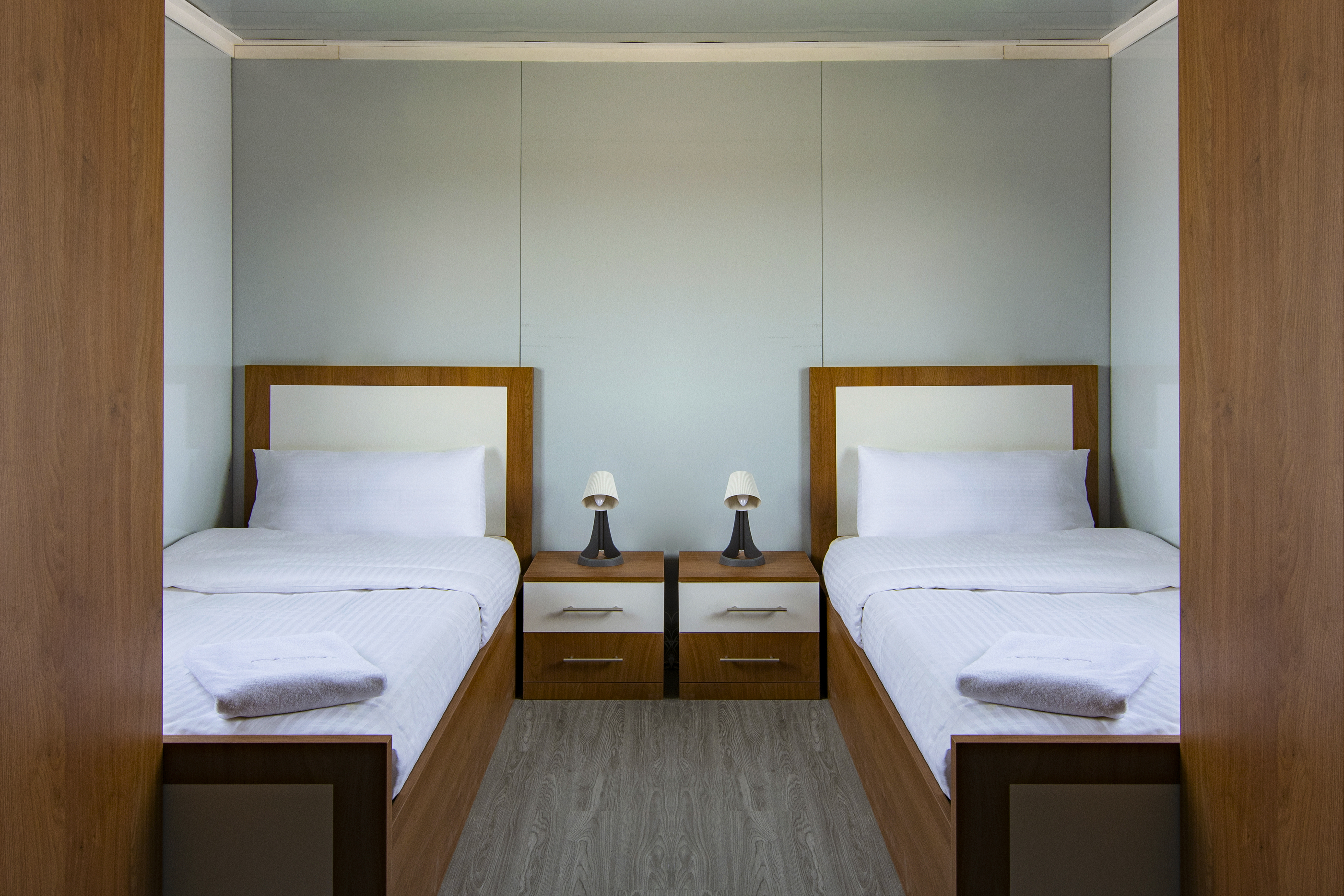 England fans can stay in portacabins in Doha whilst the World Cup is onCredit: Louis Wood 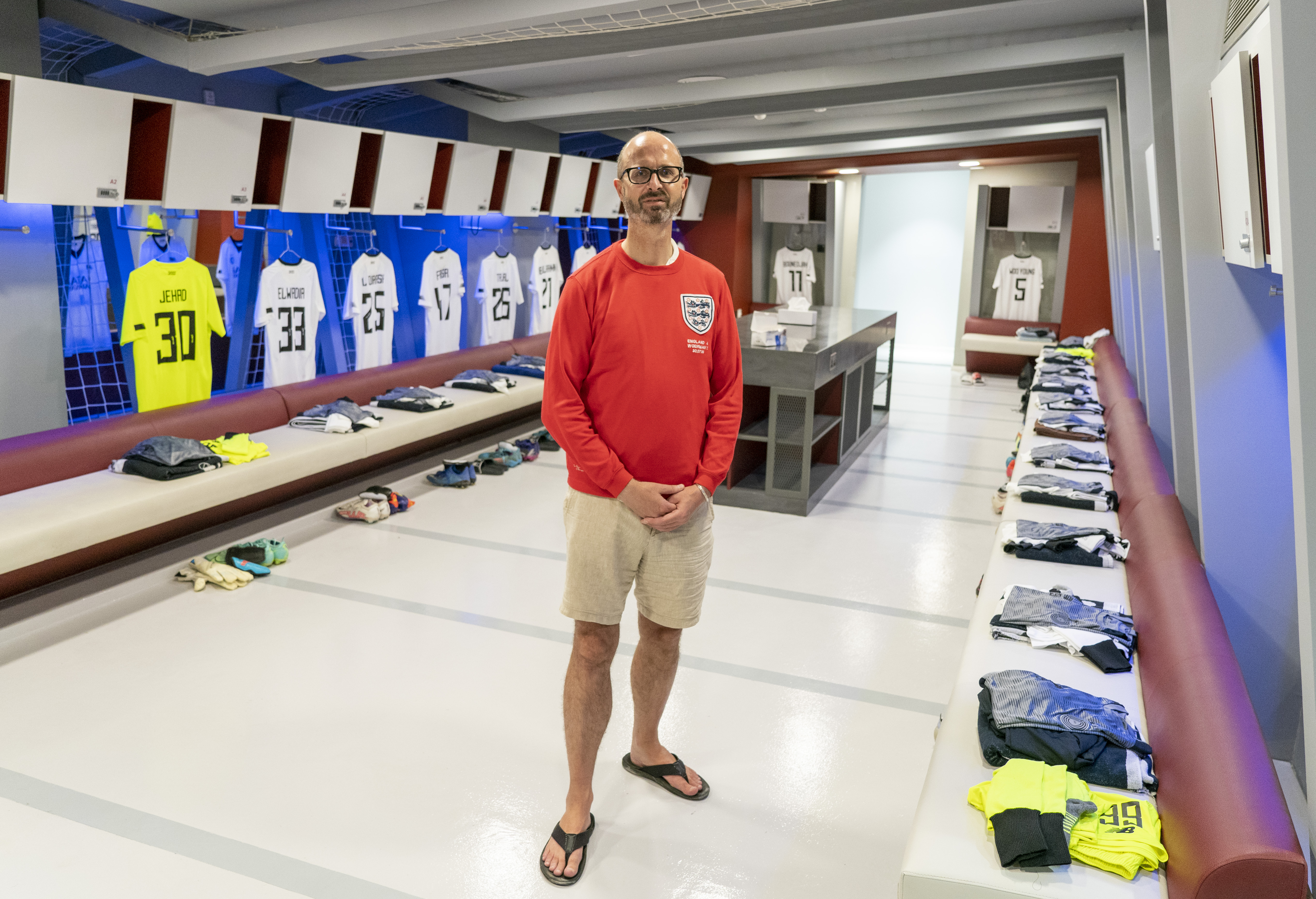 Oliver gained access into the changing room England will get ready in before the gameCredit: Louis Wood 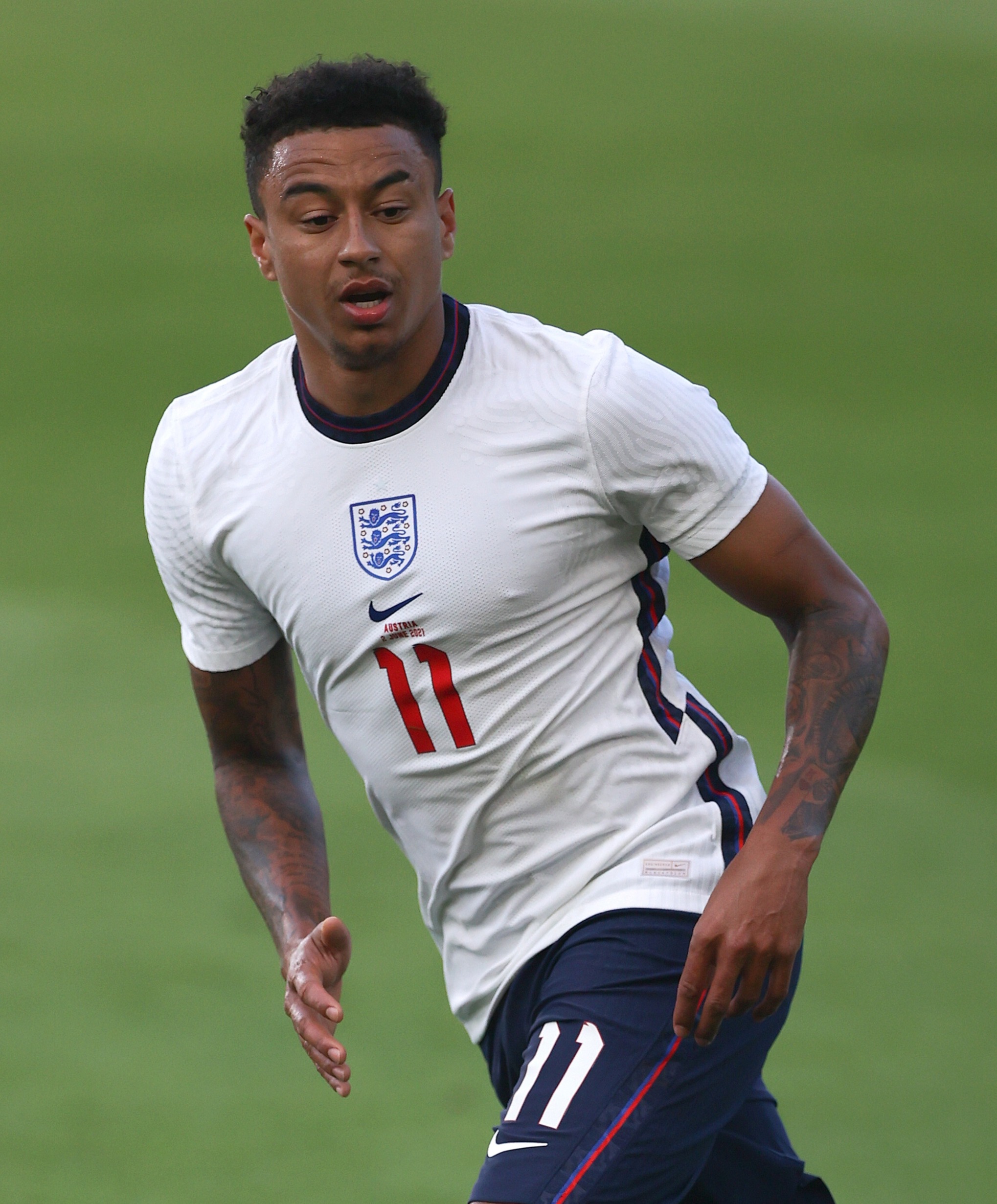 England’s best players who missed out on playing in major tournaments including Le Tissier, Merson and Gazza 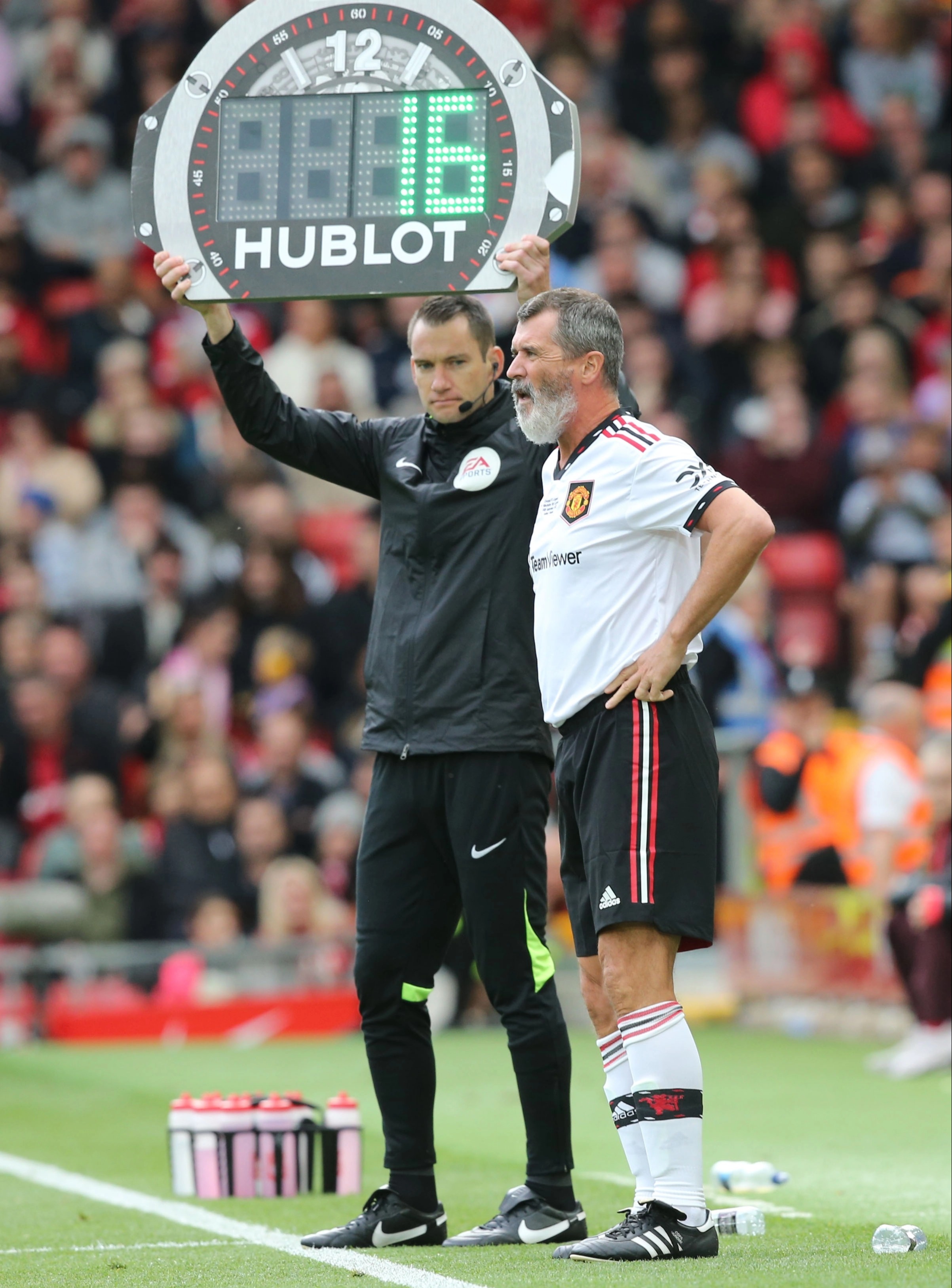