But Liverpool blew the chance to go clear at the top of the Premier League after Fulham’s outstanding first-half display left them lucky to be in the game by the break. 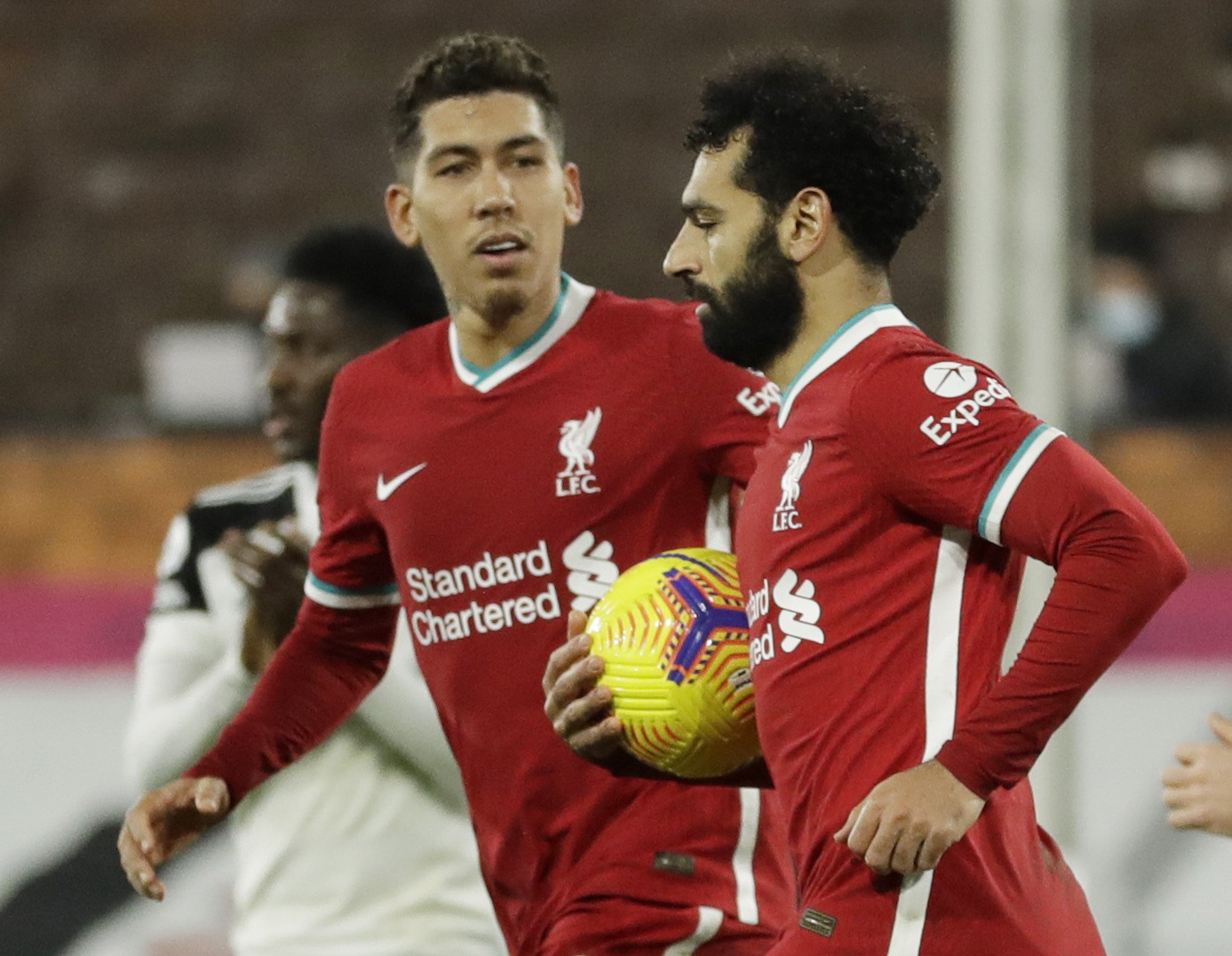 With their closest rivals, Tottenham and Chelsea, both slipping up and the two Manchester clubs boring the pants off the nation in their derby, this had looked a perfect opportunity for Klopp’s men to make hay.

Yet they needed ref Andre Marriner to earn them a point as he awarded a strange penalty decision for handball against Abou Kamara who was in the wall defending a Gini Wijnaldum free-kick 12 minutes from time.

Fulham had been denied a penalty themselves when Marriner refused to agree with his VAR Lee Mason and award a foul by Fabinho on Ivan Cabaleiro, before Bobby DeCordova had fired Fulham ahead midway through the first half.

With four wins in six unbeaten Premier League games since Virgil Van Dijk’s season-ending injury in the Merseyside derby, had been coping pretty well without their big Dutchman.

Not that his injury problems are getting a whole lot better, with Diogo Jota ruled out until February with a knee injury.

At least Allison was back in goal and Trent Alexander-Arnold had returned from a month on the sidelines.

With five at the back, two holding midfielders and no recognised striker, Parker’s team-sheet hardly looked as though he was going to play to the returning galleries. 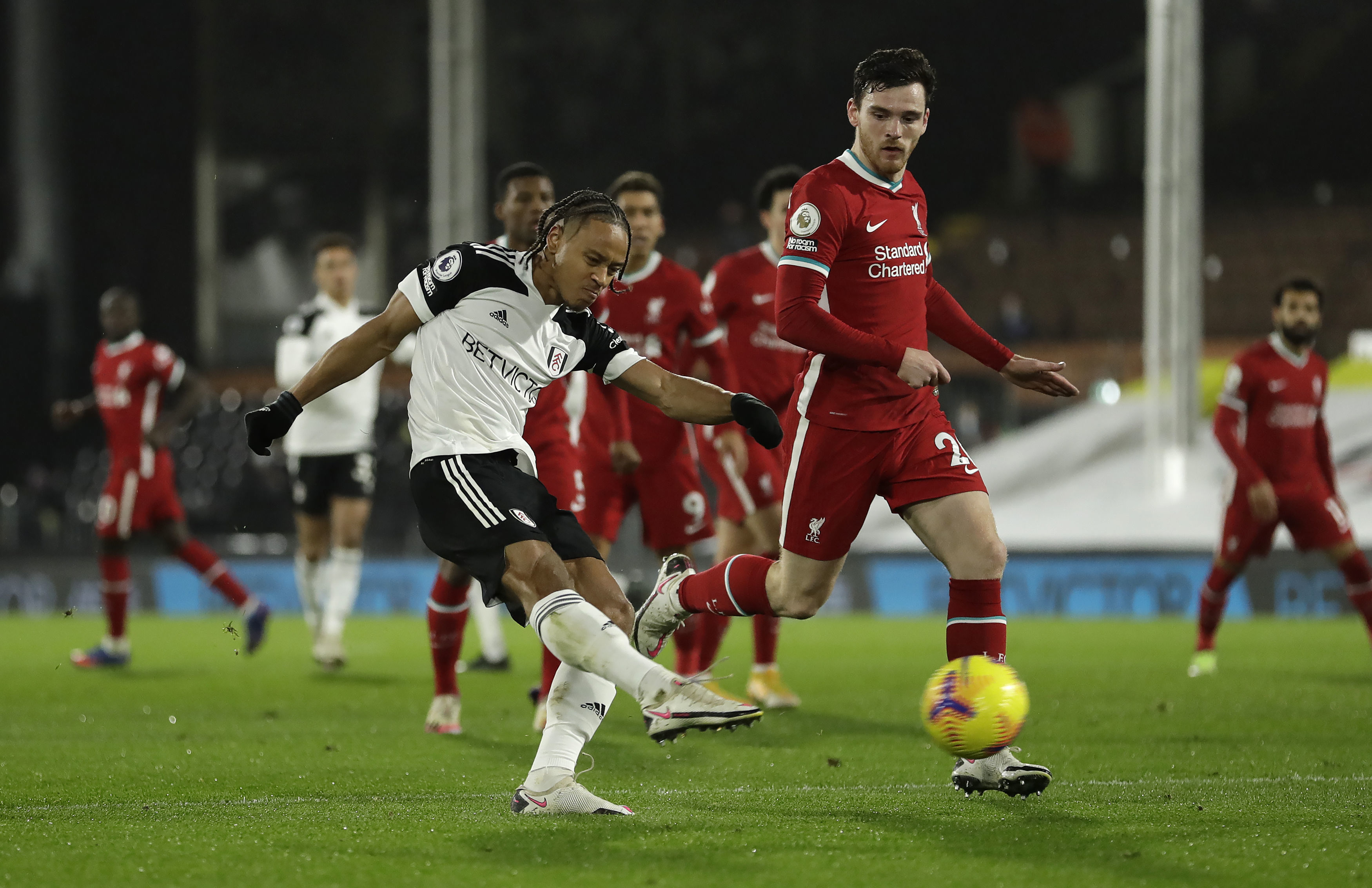 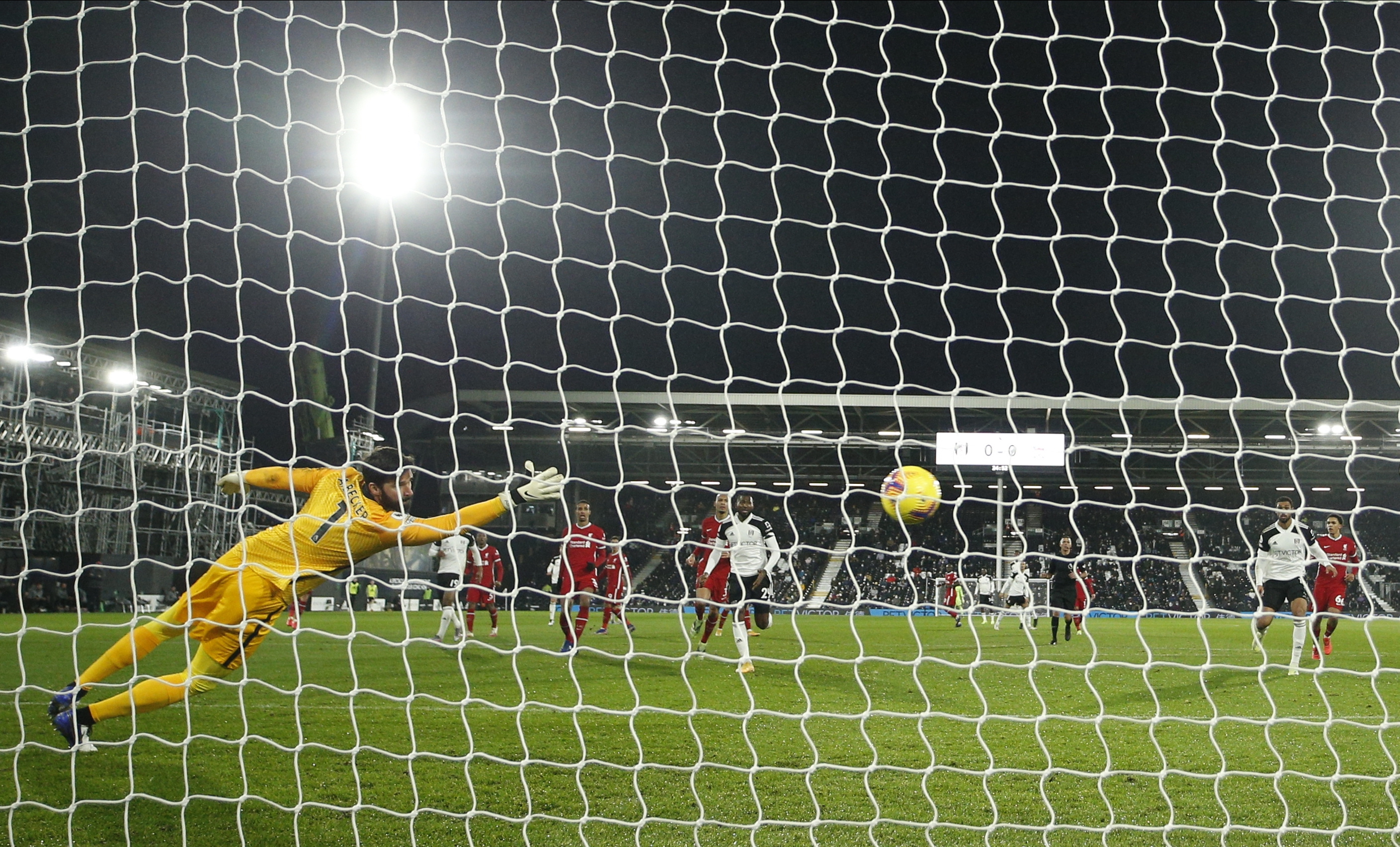 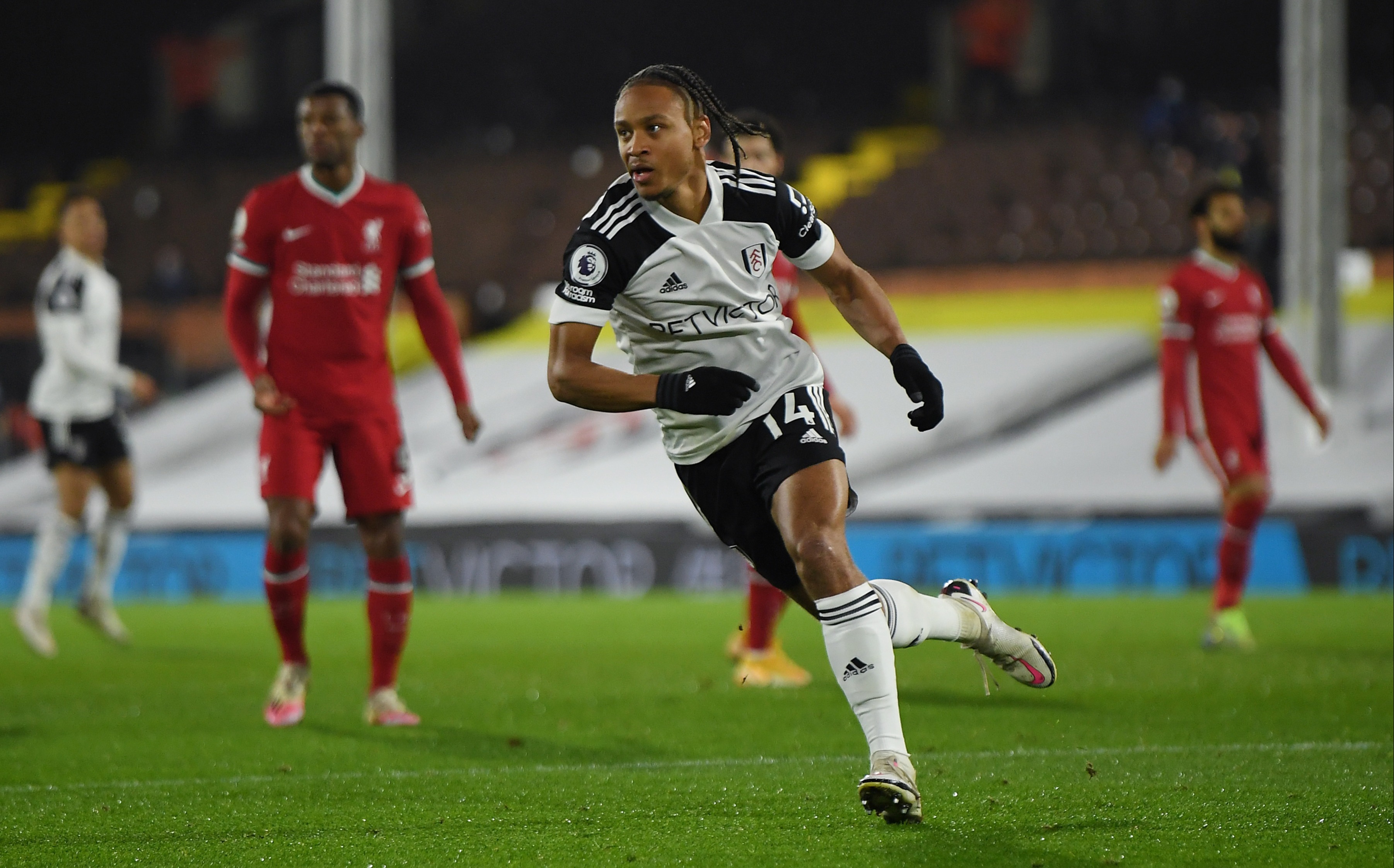 Reid reals off in celebration as he puts Fulham in front Credit: Getty Images – Getty

Eight of Parker’s starting line-up had never played in front of a home crowd at Craven Cottage.

Yet that line-up was deceptive. Parker had clearly sent out his team with the intent to rattle Liverpool – and how they did.

Within four minutes Ivan Cavaleiro was sent clean through but shot too closely to Allison who pushed over.

Then an even better chance for Fulham’s Portuguese false nine as they outstanding Ademola Lookman threaded through a pass but again Cavaleiro shot straight at Allison, this time from close range.

Cavaleiro was involved again in a bizarre incident soon after when Fabinho made a sliding tackle on him to hand Fulham a corner.

This almost invariably leads to a spot-kick but Marriner was adamant he had not made a clear and obvious error and signalled for a corner. 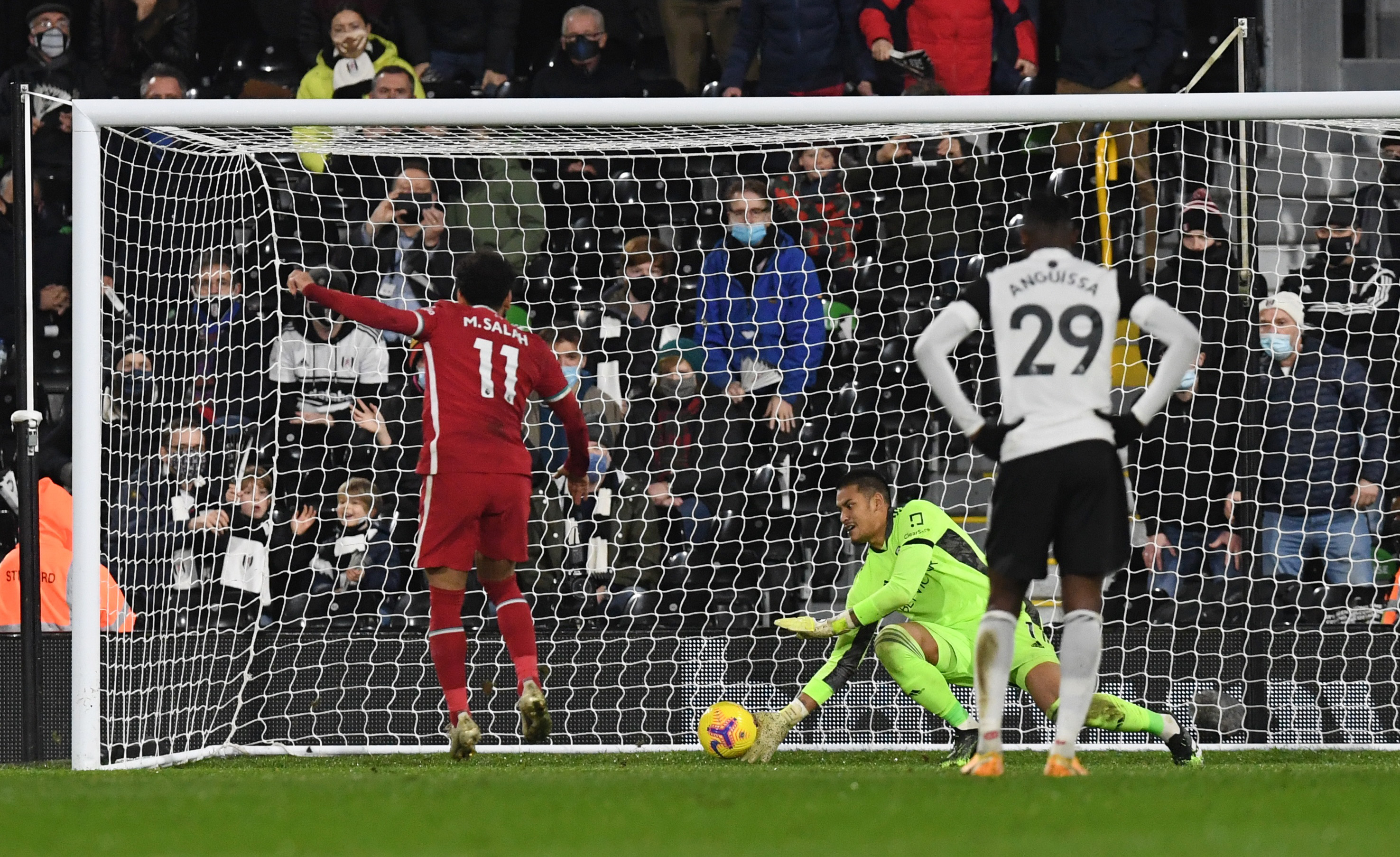 Mo Salah squeezes his penalty underneath the Fulham keeper

Perhaps the ref was showing mercy to Fulham, who have missed three penalties in the Premier League this season, even though Cavaleiro had scored their most recent spot-kick in a shock win at Leicester.

Fulham were full of it, though, and Ola Aina soon sent a crossfield diagonal pass to Lookman whose low drive was pushed wide by Allison.

The resulting corner was not fully cleared, however, and Frank-Andre Anguissa fed DeCordova-Reid who drilled into the far corner.

The appeals for supporters to avoid ‘excessive singing and shouting’ was being ignored. Although what would count as excessive when a newly-promoted side are leading the champions of England and the world?

There was a VAR check for a possible foul by Antonee Robinson on Mo Salah but Mason was not impressed.

Next, when Robinson and Lookman led a breakneck counter-attack, Cavaleiro shot wide across goal.

It was not only until the final five minutes of the first half that Liverpool even started looking like Liverpool. 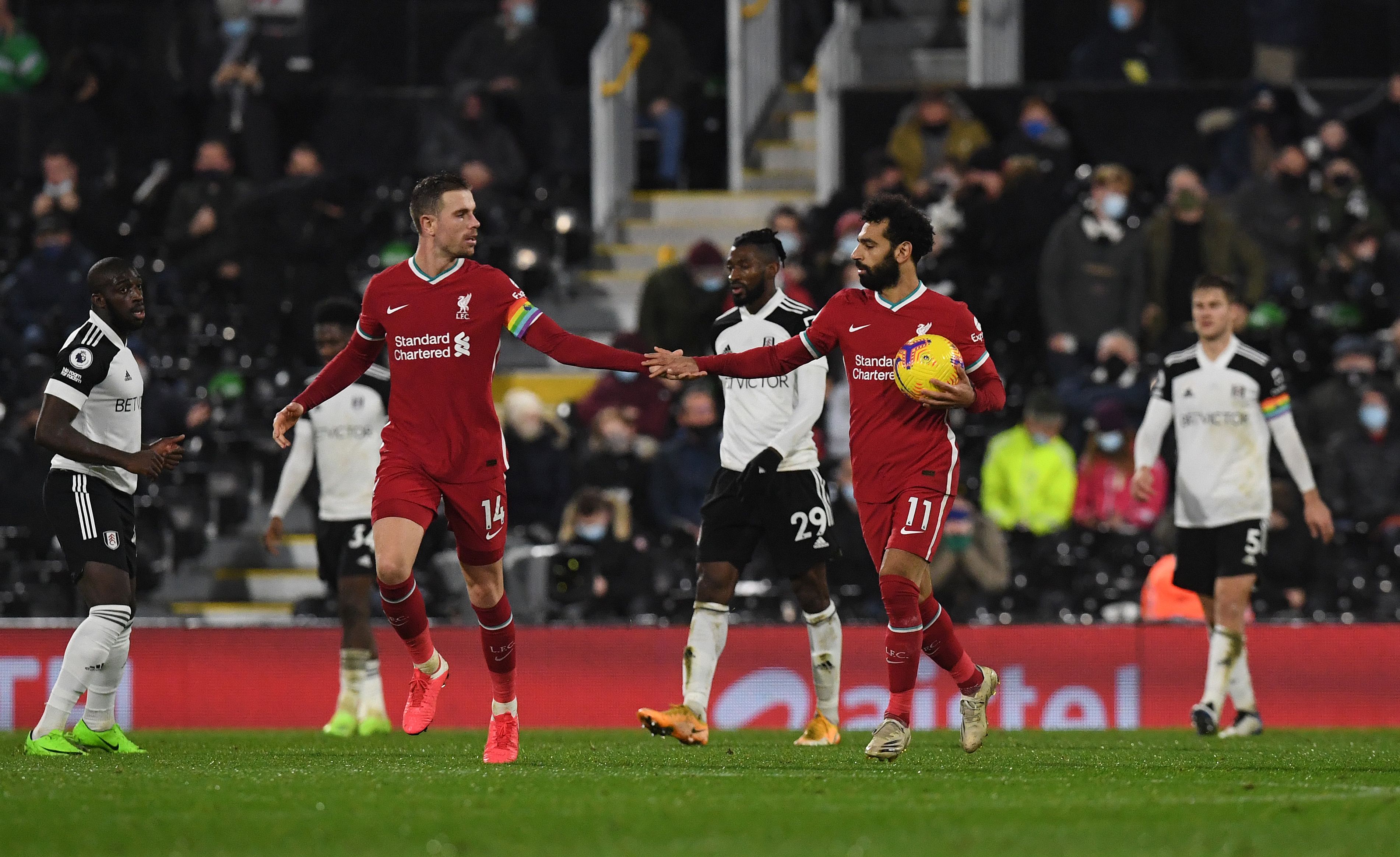 Finally they pinned Fulham back for a stretch, Sadio Mane heading over when he ought to have scored from a Curtis Jones and Salah spinning to shoot wide from an Alexander-Arnold centre.

At half-time Takumi Minamino was sent on in place of Joel Matip – who was apparently suffering a back problem – leaving Jordan Henderson to drop back into a makeshift central defensive partnership with Fabinho.

There was a chaotic sequence between Andy Robertson and Allison which threatened an own goal – but the Reds countered and Salah’s shot was pushed wide by Alphonse Areola.

Liverpool’s clearest chance arrived when Firmino sent Henderson clear in the box only for Areola to make an outstanding save with his feet.

Then that contentious equaliser as Mario Lemina fouled Curtis Jones and Wijnaldum ploughed the free-kick in the wall.

Kamara turned his back but had kept his arms inside the natural shop of his body as he is supposed to – yet Marriner and Mason contrived to give the penalty.

Salah’s effort was not convincing but Areola allowed it to slip through him and earn a point to take Liverpool back level on points with Spurs.