REMEMBER January, when Tottenham fans were in deep panic mode because they didn’t seem to be signing anyone?

The window was saved with the signings of Dejan Kulusevski and Rodrigo Bentancur on Deadline Day but all that stress could have been avoided had they sorted themselves out just a little earlier.

With the additions of the likes of Yves Bissouma and Ivan Perisic, Antonio Conte has signalled his intent to compete at the top of the Premier League next season

That intent has only been reinforced by the new that Tottenham have completed the club-record signing of Brazilian international Richarlison from Everton.

Richarlison has been a forward who has consistently impressed during his time with England having first moved to Watford and then on to Everton. 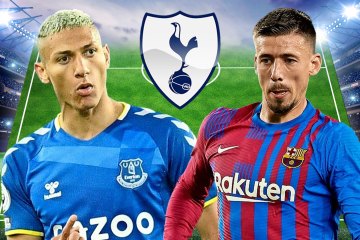 The question from Spurs fans, however, is how he will fit in an attack that already features Harry Kane, Son Heung-Min and Kulusevski.

Realistically speaking, it was always going to be incredibly important that Spurs added depth to their attacking options as the club appear to be willing to listen to offers for the likes of Lucas Moura and Steven Bergwijn.

It was also important that when the club added depth and options in the final third that they did so with a player who represented a genuine replacement and not a drop-off in quality.

Richarlison is a versatile and aggressive footballer who has the ability to play across the front line, although at Everton he mainly featured from the left or through the centre.

He has the skill set to drop off from the forward line to link the attack and the physicality to play in between the central defenders with the threat to run into space behind the defensive line.

Let’s look at how the Brazilian forward could fit in at Spurs.

Spurs coach Conte is not known as a “pressing” coach – instead his teams play out of possession with the midfield block dropping deeper and sitting in a position to protect the centre of the defence.

But that does not mean that aggressive pressing players are not important in his system.

While the pressing structure at Spurs is not similar to the likes of Liverpool or Manchester City there is still an expectation that the forward line are active against the ball in disrupting the opposition build-up. 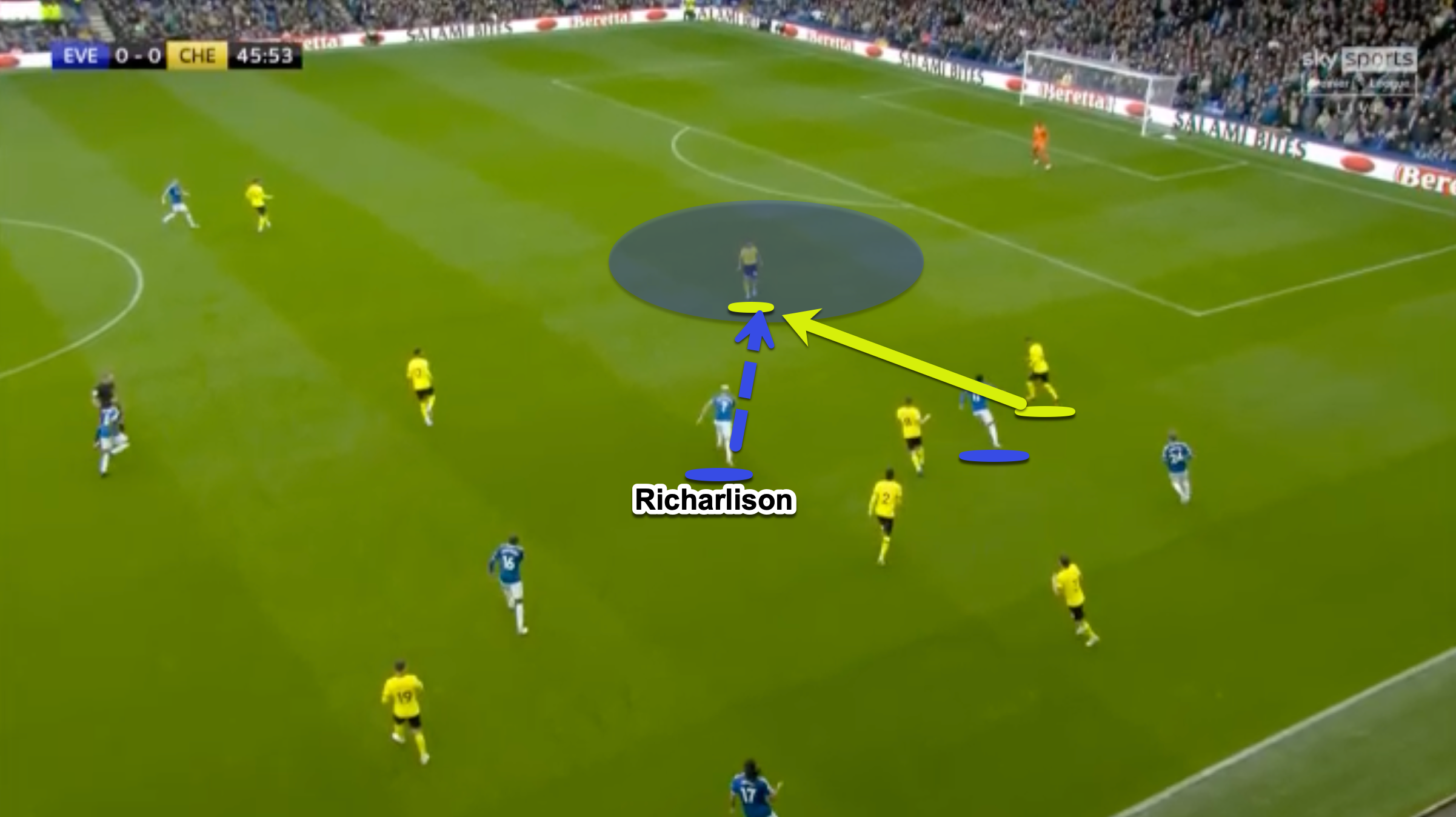 The likes of Son Heung-Min in particular are well known for their high work rate and athleticism when working across the pitch and putting considerable pressure on the ball carrier.

While these days Harry Kane is perhaps more content to drop off and preserve his energy, there is an expectation from Conte that the wide forwards work hard to contain and slow down the opposition build-up. 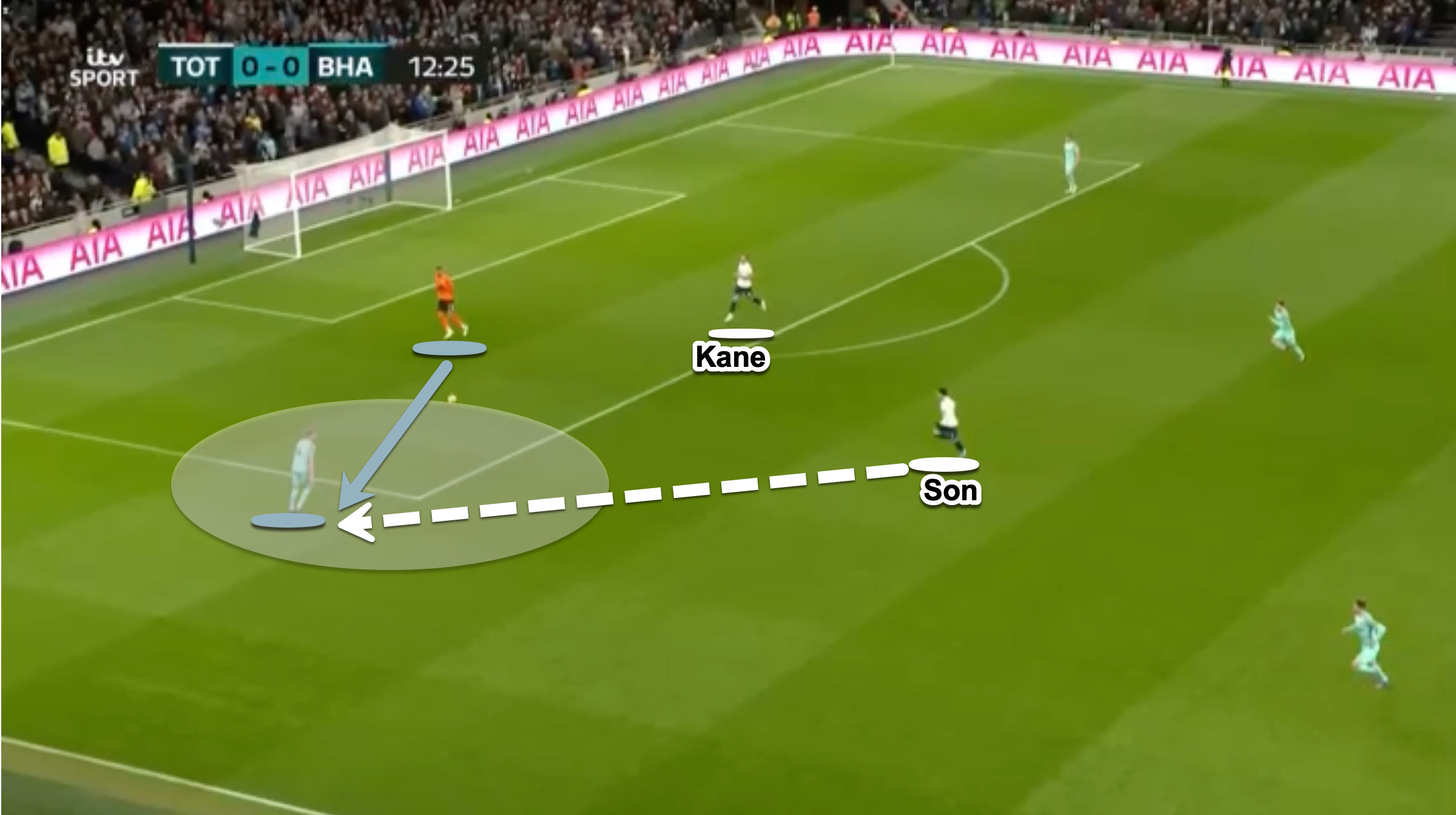 Pressing when isolated is not typically something that forward players will enjoy doing.

When we talk about good pressing teams we normally expect the first player to go and press while one more supports at an angle to prevent the easy escape.

The press in these situations is dependent on the players behind the two pressing players to press higher and effectively man-mark the other players of the opposition.

Richarlison has the same aggressive tendencies that Son displays.

He is quick and active in terms of reading the intention of the opposition as they look to build from the back and he will move to engage, block and dispossess the opposition player quickly.

Richarlison has a quick and powerful profile.

Even when Richarlison plays out on the left-hand side he is more likely to play inside in the channels as he consistently looks to position himself between the opposition fullback and centre back and to attack the space that gives him.

Interestingly as far as this transfer is concerned Richarlison is more dangerous for us when he plays as a more central attacker.

From these areas, he is a threat to spin and run between the line and when he receives the pass in open space he is strong and aggressive in his approach. 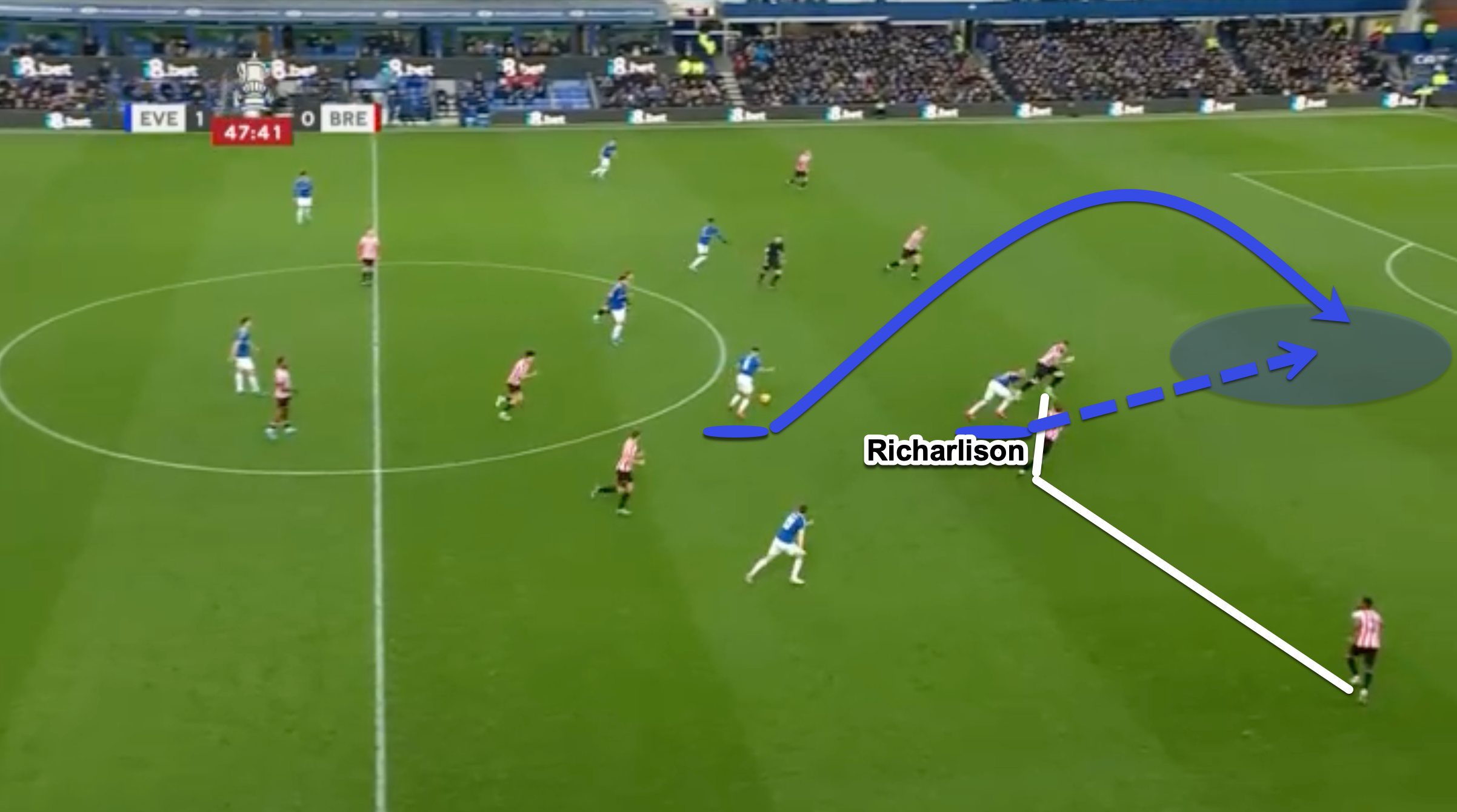 In recent years one of the most interesting developments surrounding Spurs has been the development and changing style of Kane.

While the English international forward is still one of the most dominant and dangerous forwards in football his tendencies have changed notably over the last season or two.

While previously you might have classified Kane as a typical penalty box striker with the ability to link play in the final third he has since changed into more of a complete forward.

Indeed, there were times last season that the movement of Kane started to resemble the likes of Roberto Firmino as he dropped deeper in order to take possession and look for the pass to unlock the opposition defensive line. 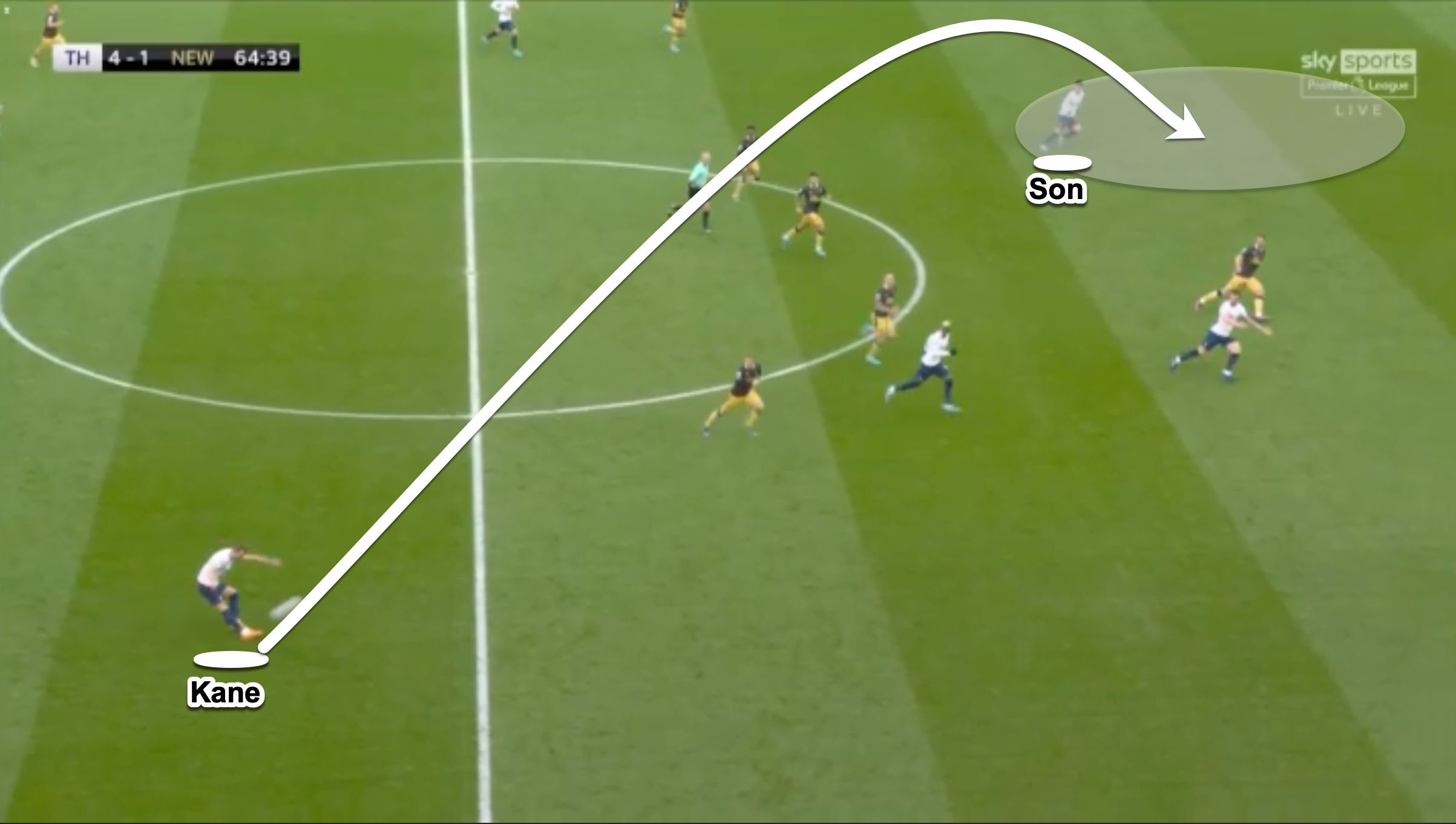 With Kane now looking more like a creator from the forward line the addition of Richarlison who, along with Son, is capable of coming inside from the wide areas and looking to attack through the centre we are now likely to see a more aggressive and centrally focussed attack from Spurs.

For all that the core strengths of Richarlison’s game lie in his aggressive approach and off-the-ball movement through the lines, he is often overlooked as a creative player in the final third.

In truth, however, he has the capacity to receive the ball and then either link with his back to goal, where he can play off of one or two touches, or to get turned and look for opportunities to slide passes to the striker or beyond the last line. 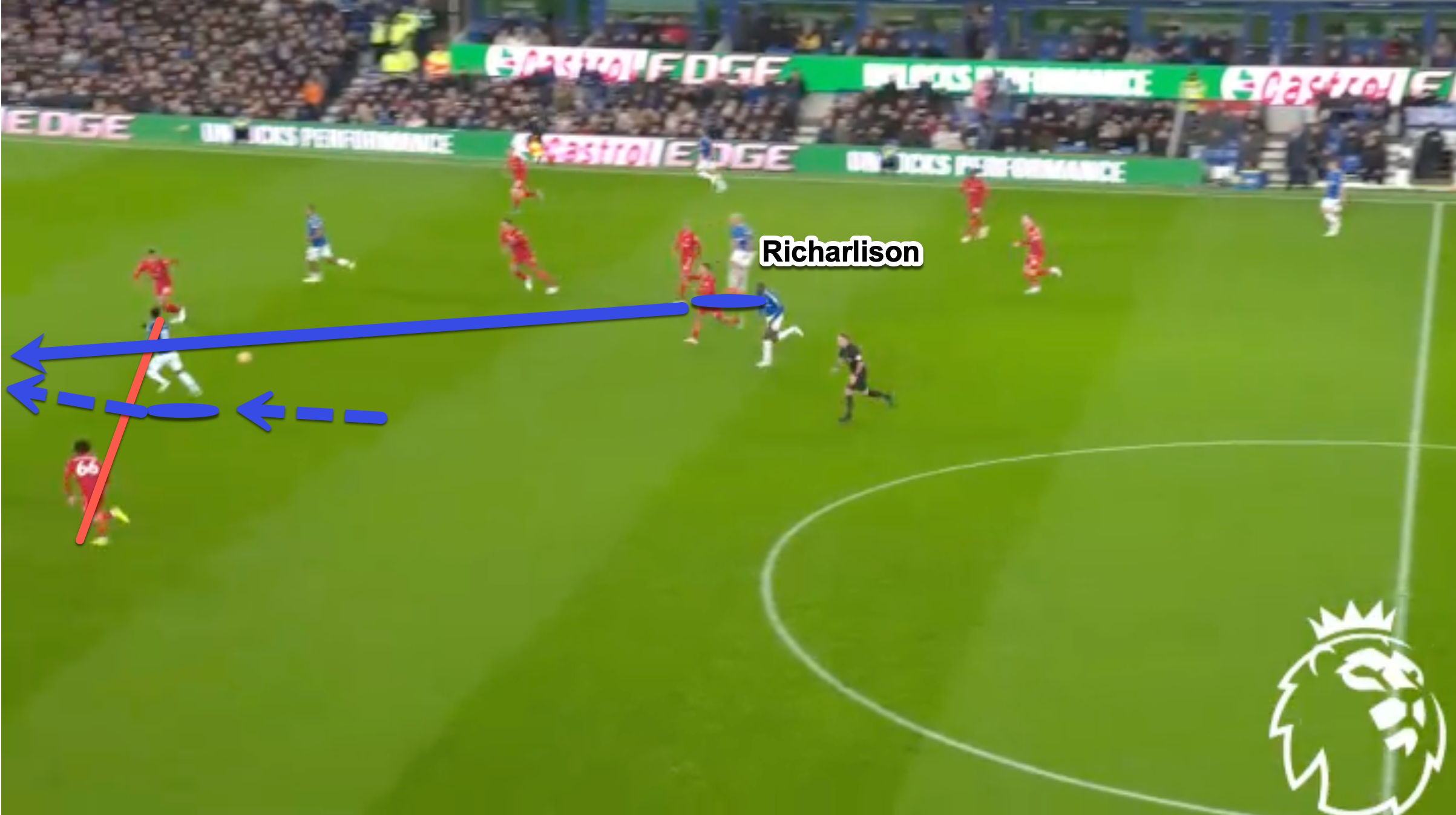 Richarlison receives the ball in the opposition half on the half-turn. Despite coming under immediate pressure in this position he is able to find the pass through into space to release the striker

Now, playing for Spurs with the movement of the likes of Kane, Son and Kulusevski, depending on who else is in the forward line, we are likely to see the creative side of Richarlison really come to the fore.

Expect to see more variation in terms of his movement and positioning as he will drop into areas to receive the ball before linking with teammates. 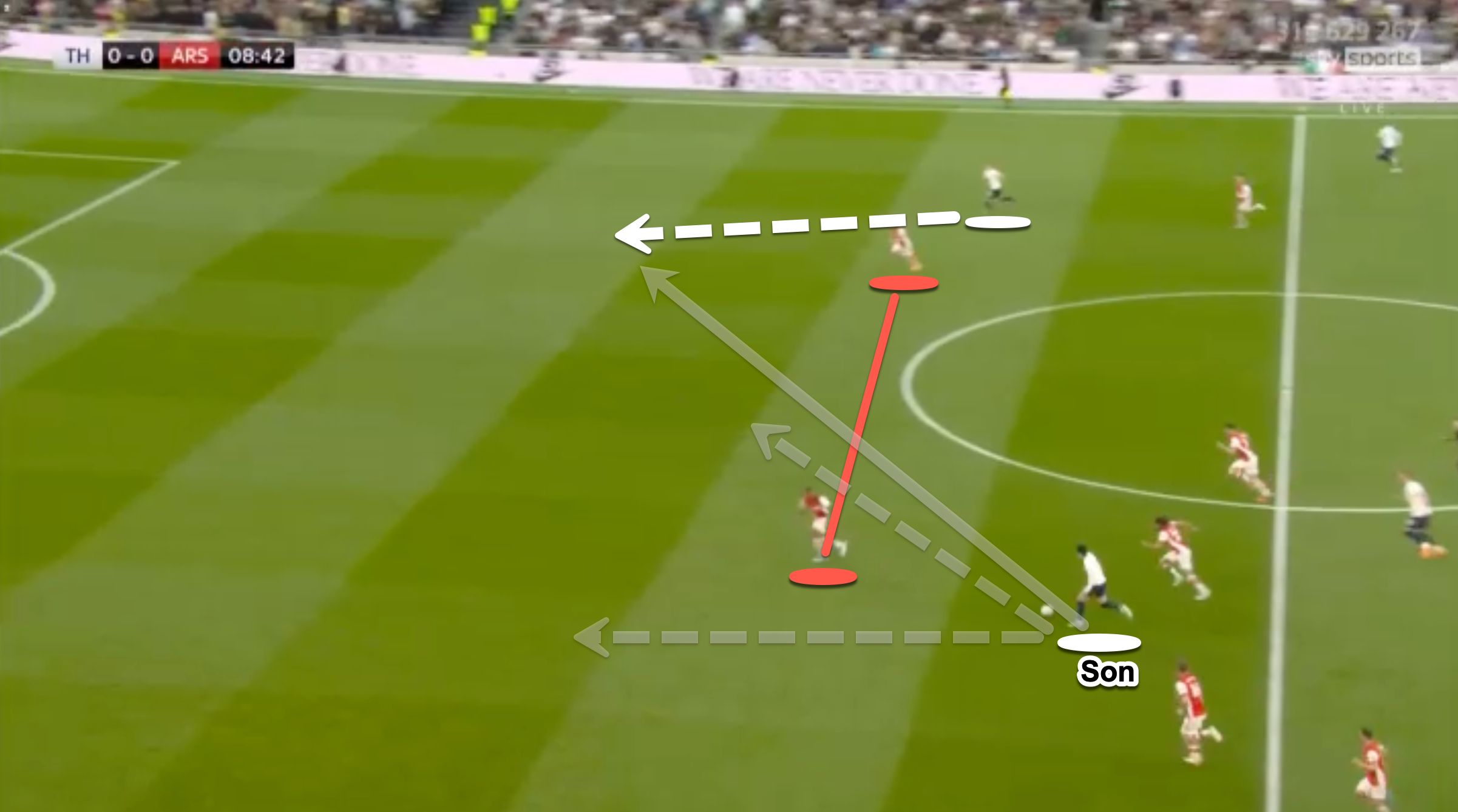 Son has possession in transition when isolated against the opposition defender. He is versatile in that he can attack on the inside or outside or switch the play

Richarlison will be exceptionally important for Spurs in moments of transition both in terms of his creativity and his movement.

Expect to see him act as the target in transition (along with Son) given his aggressive approach to heading straight to the opposition goal.

What does all this mean?

One of the issues Spurs have had for many seasons is the drop in quality if Kane or Son get injured. Adding Richarlison into the mix, they’ve closed that gap.

He may not even be in the first-choice front three, but that does not matter – he will play many, many minutes this coming season.

His arrival shows Tottenham are doing all they can to keep pace with the likes of Chelsea, Arsenal and Manchester United when it comes to aiming for a Champions League place – or even a surprising run at the title.