NORWICH boss Dean Smith has something of a conundrum on his hands ahead of Saturday evening’s clash against Manchester United.

Not only is the former Aston Villa boss still getting to know his new Canaries squad, but he has to go up against a United side who have seen their tactics torn up since Ralf Rangnick took over. 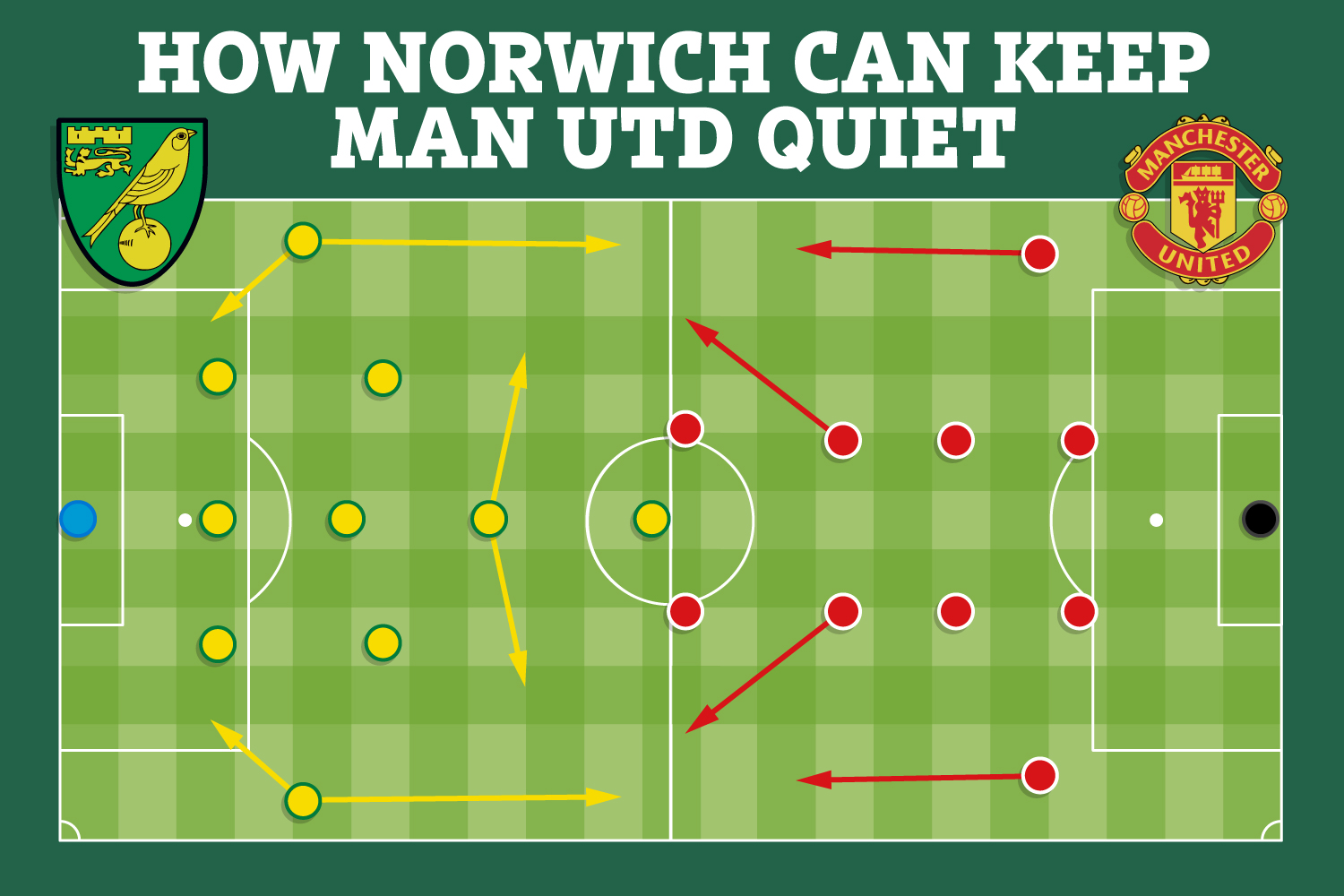 On top of that, Smith has confirmed the club are in the midst of a Covid scare – with FOUR unnamed players awaiting PCR test results – which could affect his first-team options.

With just hours to go until the game, the uncertainty is not ideal.

But first and foremost, the plan for relegation-battling Norwich will be to get a result at Carrow Road.

So how should Smith send out his troops?

Last time out, the Norwich boss opted for a 5-3-2 – with three centre-backs and two flying wing-backs, a central midfield trio and two centre-forwards.

Unfortunately for the Norfolk club, they were ripped apart 3-0 by Tottenham.

Despite the result, the 5-3-2 could work in their favour against United.

Rangnick is deploying his famous Gegenpress tactics already, with the Red Devils visibly more aggressive in closing down the opposition against Crystal Palace.

The German tactician favours a 4-2-2-2 – which appears to be getting the best out of United.

Defensive duo Fred and Scott McTominay sit just in front of the defence, helping to snuff out opposing attacks and start their own.

Jadon Sancho and Bruno Fernandes are given a fairly free run in the attacking midfield spots, drifting wide when needed, but wreaking havoc through the middle when given the chance.

Norwich can counter this threat by packing their central ranks too – perhaps even deploying a 5-4-1 diamond.

With three centre backs and FOUR central midfielders – with fit-again Todd Cantwell starting behind the striker – the Canaries can stifle any threat United try to pose through the middle.

Loanee Brandon Williams is ineligible to face his parent club, so Dimitris Giannoulis will likely start on the left-side of defence, with Max Aarons on the right.

With two wing-backs, Norwich will be able to snuff out United’s wide attacks, but also pose a threat with width in attack – particularly if Cantwell drifts into his more-natural wide positions. 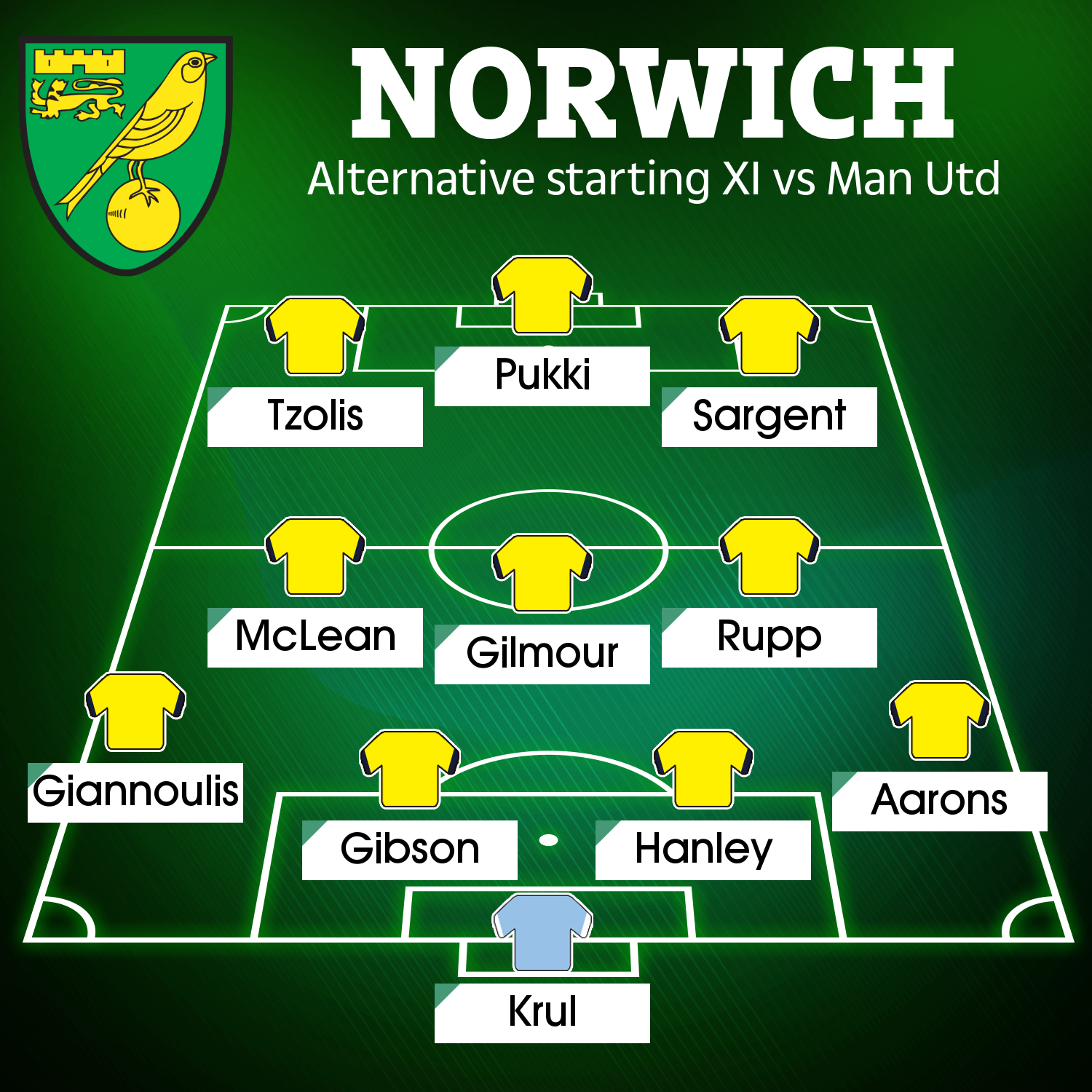 Given the thumping against Tottenham using a similar formation, Norwich could opt to fight fire with fire.

Smith could be brave and field a 4-3-3 in a bid to take advantage of United’s weakest area – their defence.

In this formation, Cantwell and Andrew Omobamidele would make way for attackers Christos Tzolis and Josh Sargent, providing support for Teemu Pukki.

With experienced duo Ben Gibson and Grant Hanley joining Aarons and Giannoulis in a back-four, Norwich would still have plenty of defensive strength.

And with Billy Gilmour almost certain to start alongside Lukas Rupp and Kenny McLean, there’s a good balance of attack and defence in the middle of the park.

So the biggest decision for Smith really boils down to one simple question: Is he feeling brave?

Currently bottom of the table with just 10 points from 15 games, the Canaries are now only three points adrift of 17th-placed Watford after a slight uptick in form.

With Christmas rapidly approaching, Smith could opt for damage limitation heading into the second-half of the season.

Or he could attempt to take advantage of a United team still very much a work in progress as Rangnick makes wholesale changes.

Only time will tell. But for Norwich, this one tactical conundrum could make or break their entire season.