FINALLY, someone else can have a go.

Pep Guardiola and his Manchester City must now let the Carabao Cup out of their sight after finally being dumped out of the competition.

West Ham are into the last eight of the Carabao Cup after dumping holders Man City out via penaltiesCredit: AFP 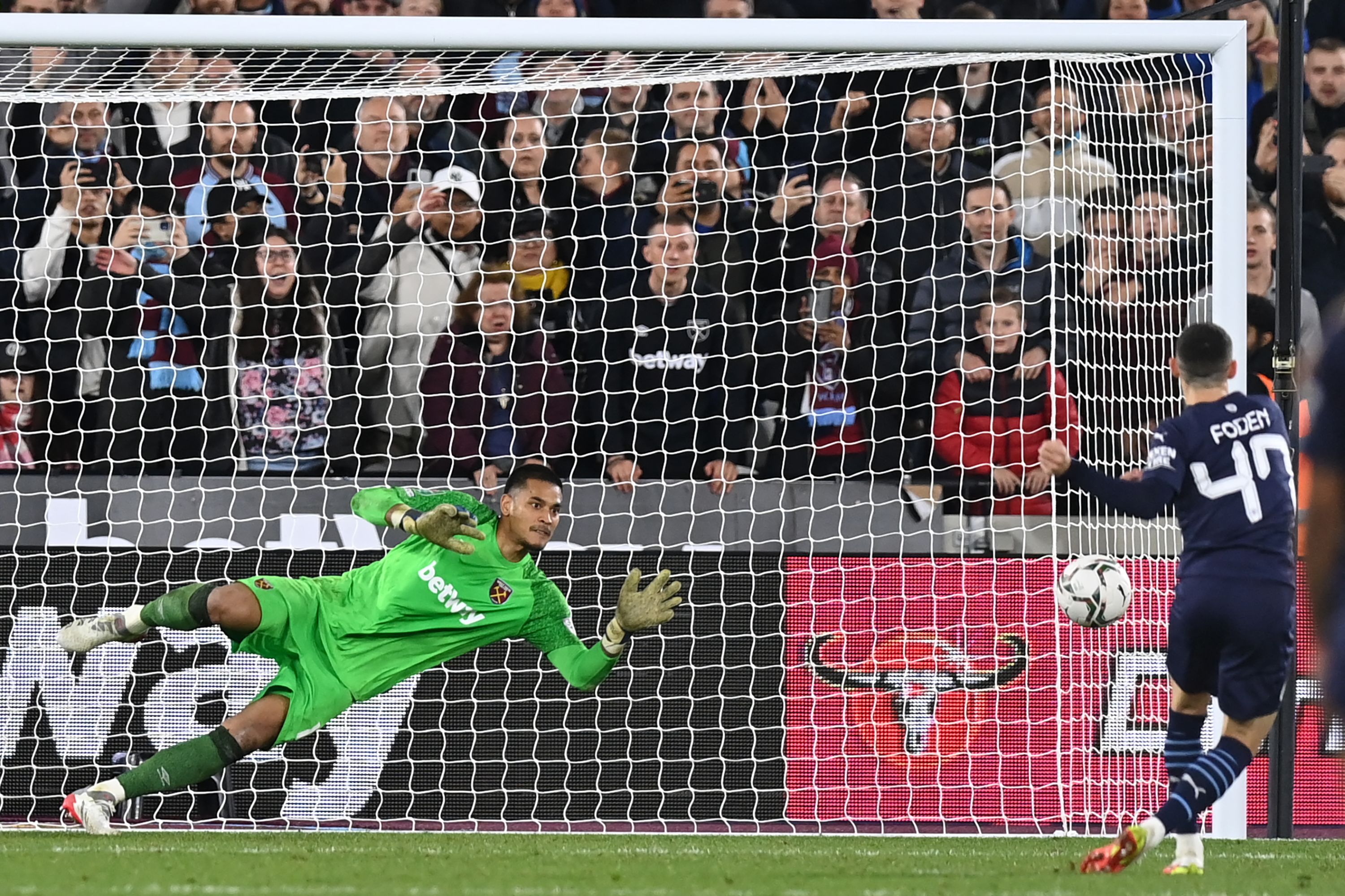 Phil Foden missed the crucial penalty for the CityzensCredit: AFP

It had been five years and one day since Guardiola and his City team lost a tie in this competition, suffering defeat in the fourth round at Manchester United with Juan Mata scoring.

And it was a poor penalty from Phil Foden which was the difference with Said Benrahma completing five impressive hammers penalties.

While Joao Cancelo, Gabriel Jesus, and Jack Grealish all scored, City were left to pay after that miss by Foden, a 72nd minute sub who livened things up.

And now West Ham can dream of going all the way and not having City in the final – again – might not be a bad thing.

There were 59,000 at Arsenal for the tie with Leeds on Tuesday and just under 40,000 watching Chelsea’s win over Southampton.

And on the day West Ham announced they were adding another 2500 seats to take the capacity to 62,500, the stadium – helped with a kids for a quid offer – was a complete sell-out.

The atmosphere was not quite as bonkers as three days earlier when West Ham beat Spurs 1-0 but they certainly celebrated at the end.

Yet like that London derby game, it was an ugly, scrappy game with a fair few chances but some abysmal finishing.

And taking into the account that West Ham are also in the Europa League – they face Genk a week today – it was not a surprise David Moyes made eight changes from Sunday while  only Kyle Walker and Ilkay Gundogan survived from the 4-1 win at Brighton.

John Stones has suffered a miserable campaign for City as this was only his second club appearance of the season and he had a relatively easy night.

Not much happened in the first half. Mark Noble drove a long range shot straight at Zack Steffen to palm away.

Michail Antonio was given a much-deserved day off from the matchday squad although it was a reminder that without him, West Ham do not have a vocal point.

City were comfortable without ever really threatening to run riot. For Raheem Sterling, it was once again a struggle for him to deliver the type of form he shows for England.

Yet teenage forward Cole Palmer, making only his third start, was confident on the ball and showed some lovely touches and good awareness.

He threaded a shot through Tomas Soucek’s leg but it was kept out by the leg of keeper Alphonse Areola while the 19-year-old saw another effort deflected for a corner off Issa Diop.

Riyad Mahrez, yet to match his form from the second half of last season, attempted a spectacular volley which went out for a throw. And Nathan Ake should have scored just before half-time but missed an easy header from Mahrez’s free-kick.

The only good thing about this opening half was that there were not any added minutes.

Said Benrahma is congratulated by his team-mates after firing the Hammers into the last eightCredit: Richard Pelham / The Sun

West Ham were the first team to beat City in the competition for five yearsCredit: Getty

Mahrez attempted to finish off a slick City move started by Sterling but he hammered the shot straight at Kevin De Bruyne. Ilkay Gundogan should have done a lot better but shot wide after some more intelligent play from Palmer who also wasted a decent chance.

De Bruyne sprinkled some rare stardust over proceedings with a clever run into the box but his shot was stopped by Areola, who then kept out a header by Stones.

West Ham had been poor. But they finally gave City something to think about but Steffen pushed away a shot from Arthur Masuaku and Andriy Yarmolenko’s follow up was blocked by De Bruyne.

And Soucek rightly looked annoyed with himself while guiding a close-range shot beyond the right post and delivered a similarly poor effort with two minutes left.

And much to the delight of City’s fans, Phil Foden replaced Mahrez with 18 minutes left and Guardiola’s team began to sparkle.

A shot from Foden deflected into the path of Gundogan who was required to control the ball and finish but his first touch was terrible.

Best strike of the night – although the competition was not too hot – came from Olek Zinchenko whose spectacular effort was saved by Areola.

Foden dragged a shot wide on the stroke of 90 minutes and with the final act of the game, Sterling headed straight at the West Ham keeper.

England star Foden had one more say in this match but it was disastrous. Not that West Ham cared one bit.