ENGLAND ace Harry Maguire has told how his dad Alan was left with suspected broken ribs by ticketless yobs who stormed Wembley.

The England defender, 28, also called for a crackdown on trolls by social media firms in the wake of racist abuse of his team-mates suffered after the Euro 2020 final defeat.

Harry Maguire has revealed that father Alan was left struggling to breathe after ticketless yobs trampled him at WembleyCredit: News Group Newspapers Ltd 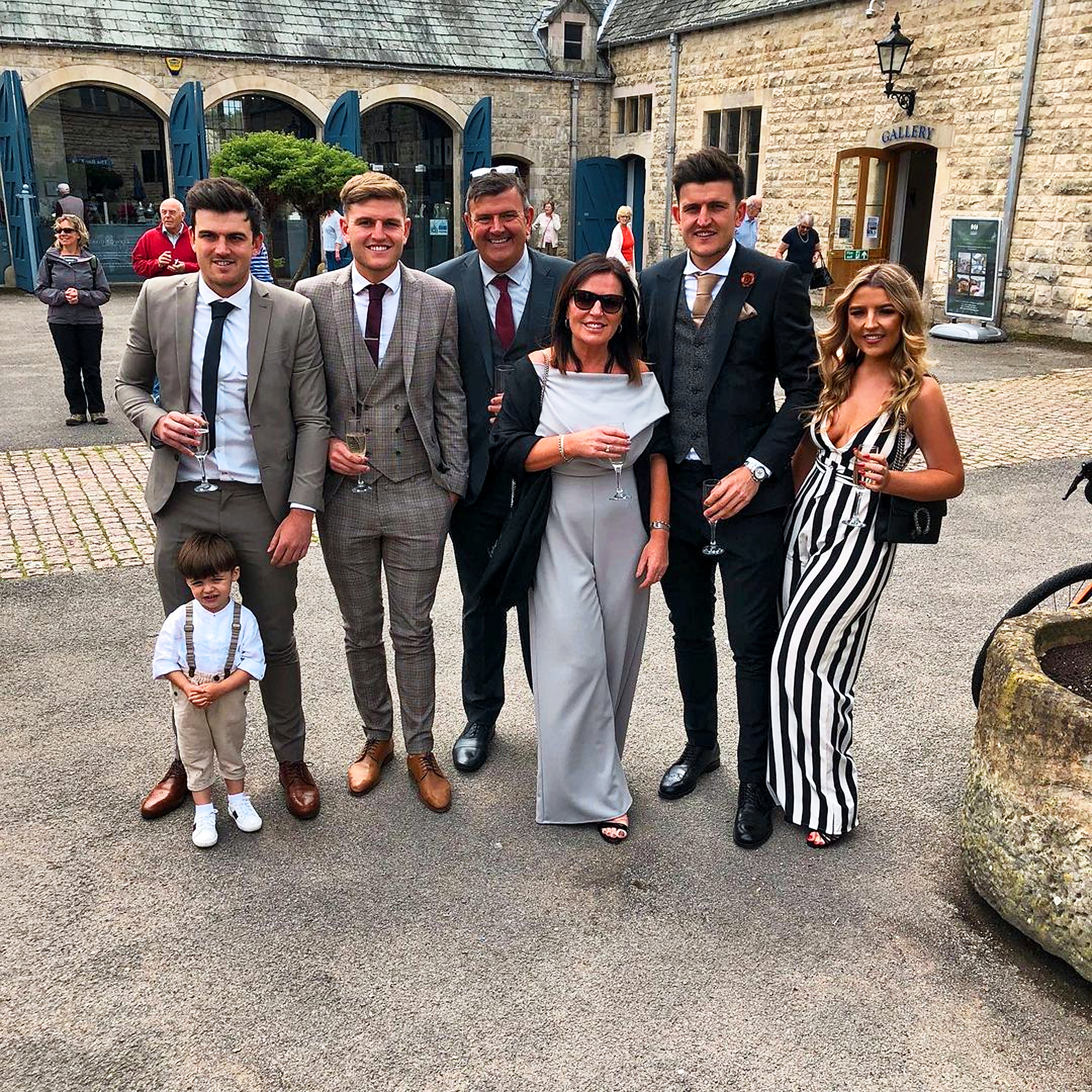 Harry pictured with his parents Alan and Zoe and their familyCredit: INSTAGRAM/DAISY MAGUIRE

Maguire’s 56-year-old father was caught up in the terrifying scenes which left him struggling to breathe after the Euro 2020 Final.

The accountant found himself pinned to the floor, suffering two suspected broken ribs, after the mob burst in through a disabled entrance and stampeded past anyone standing in their way.

Harry, who smashed home his spot-kick in the devastating shootout defeat to Italy, said of his dad’s ordeal tonight: “It was scary.”

However, battered Alan has since spoken of his relief that Harry’s two daughters — who he usually hoists onto his shoulders at games — were not caught up in Sunday night’s shameful melee.

Manchester United defender Harry said: “It was not a nice experience — it shook him up. But he was fortunate as every game he has been to he has had my nephew or one of my kids on his shoulders.

“So I’m thankful that did not happen as it could have been a really serious moment.”

Alan was one of hundreds of innocent England fans caught up in shameful scenes as thousands of ticketless yobs battered their way in after overwhelming security.

He was crushed underfoot alongside Harry’s agent Kenneth Shepherd as they made their way to the players’ families seating area to the left of the tunnel.

Harry, who was shocked by the footage of marauding yobs at the ground, told The Sun: “My dad was in the stampede. I have not spoken with him too much but I am pleased my kids didn’t go to the game.

“It was scary — he said he was scared and I don’t want anyone to experience that at a football match.

“I have seen a lot of videos and have spoken to Dad and my family. It was my dad and agent who suffered the most.

“I hope we can learn from this and make sure it doesn’t happen again.”

Despite being in extreme pain, Alan did not ask for medical treatment.

Understandably, he did not want to miss the biggest game of his son’s career.

Lionheart Harry, who paid for himself and his brother to watch England as spectators at Euro 2016 when he was a Hull City player, said: “My dad’s a big fan — he got on with it.

“He was struggling with his breathing afterwards because of his ribs, but he’s not one to make a big fuss.

“The experience at Wembley is always amazing, filled with great people and great fans normally. But this time was obviously the final and everyone got overwhelmed and the way some people acted was totally wrong.

“Dad will always support me and go to the games but he will be a little bit more aware of everything going on around. We should all be more aware and learn from it.”

Harry also told how there were several ructions in the seating areas, where ticketless yobs refused to budge. He said: “There was a lot of trouble. It happened where the friends and families were. 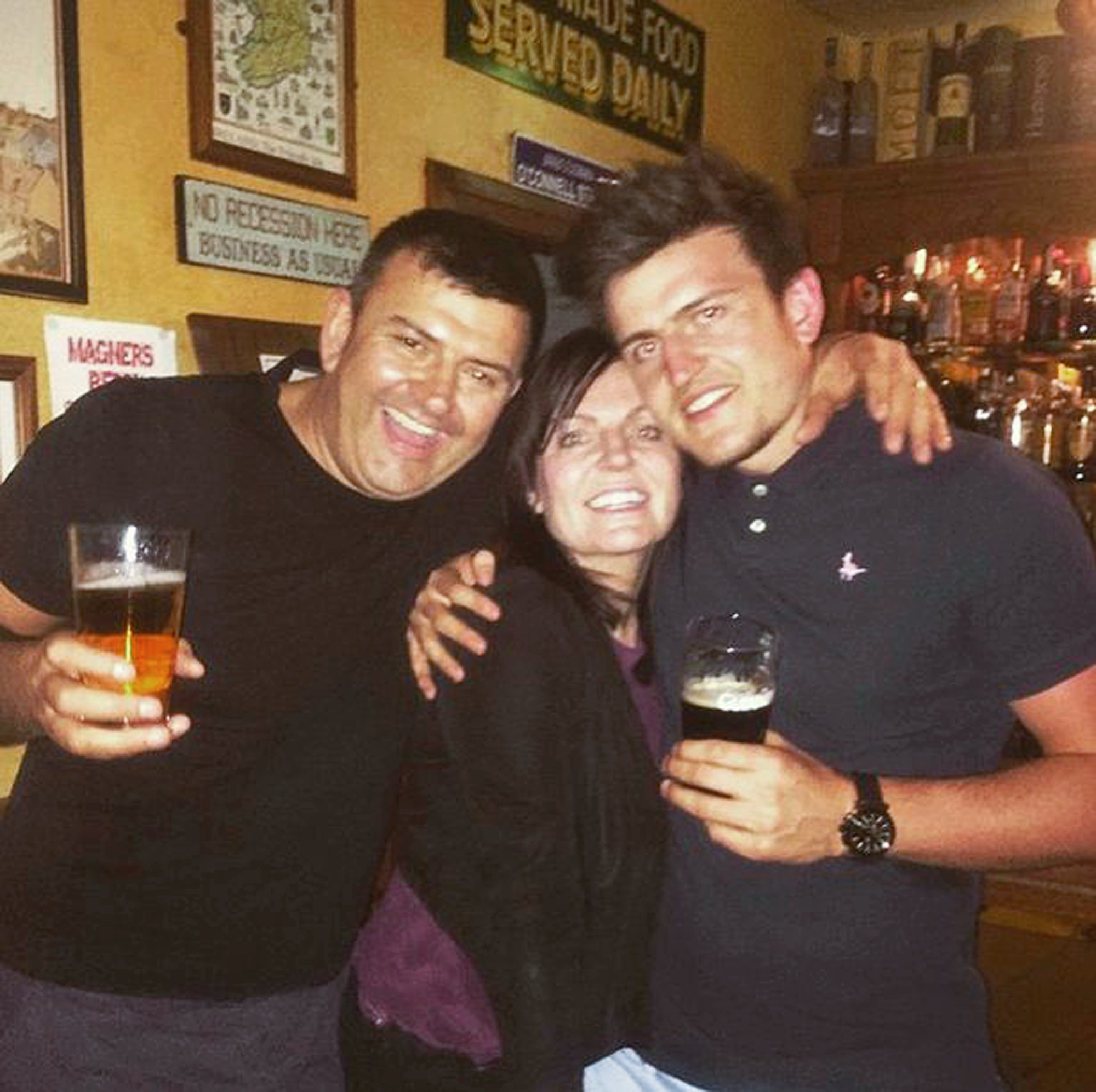 Harry says he had around 20 family and friends in the stadium for the finalCredit: INSTAGRAM/HARRY MAGUIRE 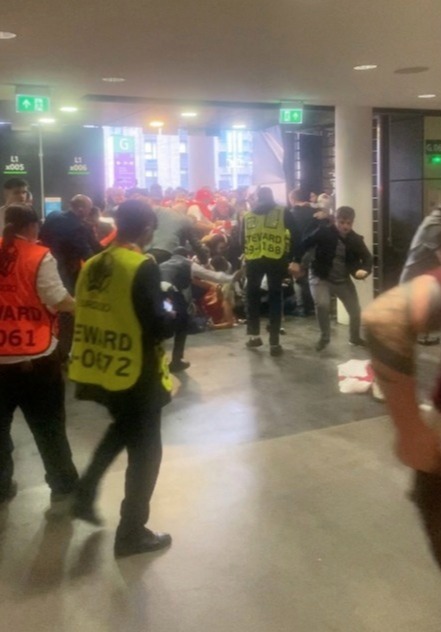 Harry’s dad and his agent were both caught up in the stampedeCredit: Reuters 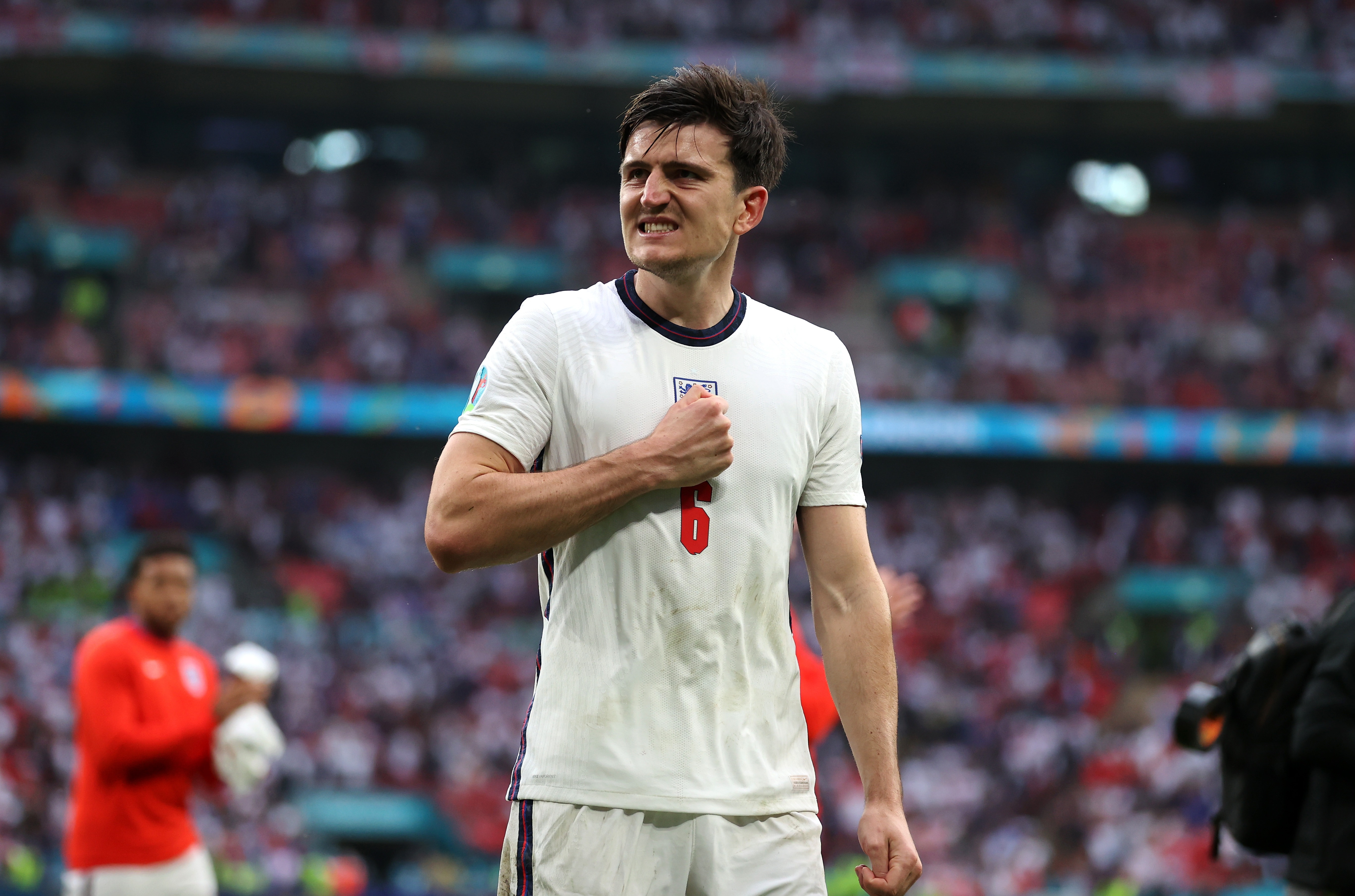 “A lot of people got to their seats and there were people sat in their seats. That caused confrontations with people being told to move.

“The main thing is you want it to be an amazing experience and you don’t want anyone to have any bad memories of the final.

“That is the disappointing thing. Things could have been a lot worse but we have to make sure it does not happen again.”

As Uefa opened an investigation into the stampede, Harry hopes the security chaos would not wreck England’s chances of hosting a future World Cup.

He added: “Wembley is an amazing place. It has been an amazing home and the fans and the way they have acted have been unbelievable, apart from the odd few in a final.

“We need to learn and we will — and it would be an amazing place to hold the World Cup.”

He also paid tribute to the support of his loved ones throughout the tournament.

Harry said: “I had around 20 family and friends in the stadium.

“I have quite a big family and they have followed me throughout all the games with England.

“Their support for me has been amazing during the tournament and they are on an emotional journey with me.”

Uefa chiefs tonight charged the FA on four crowd-shame counts arising from the mayhem. Disciplinary proceedings were opened over a pitch invasion, throwing of objects, booing the Italian national anthem and the lighting of a firework. The FA is likely to be rapped with a fine.

However, Uefa added: “Separately, an ethics and disciplinary inspector has been appointed to conduct a disciplinary investigation into events involving supporters which occurred inside and around the stadium.

“Information on this matter will be made available in due course.”

The FA was tonight facing calls for a “root and branch” security shake-up following the debacle which has shamed the national game. An estimated 2,500 ticketless thugs surged through poorly staffed security cordons before kick-off.

Furious paying fans also said the police were nowhere to be seen as trouble erupted around the ground.

One video showed scores of drunken yobs clambering through a barrier and sprinting towards the entrance as a female steward fell screaming to the floor.

She was repeatedly trampled until pulled clear. Another video showed disabled access doors being breached by dozens of males and females in England shirts.

More footage showed fights breaking out between fans and gatecrashers — with one man repeatedly kicked in the head and body after falling to the ground.

At one point a frustrated fan turns on stewards standing by and shouts: “Do your f***ing job!”

An FA spokesman said: “We will carry out a full review and investigation into the events that took place at Wembley Stadium before and during the Euro 2020 Final.” 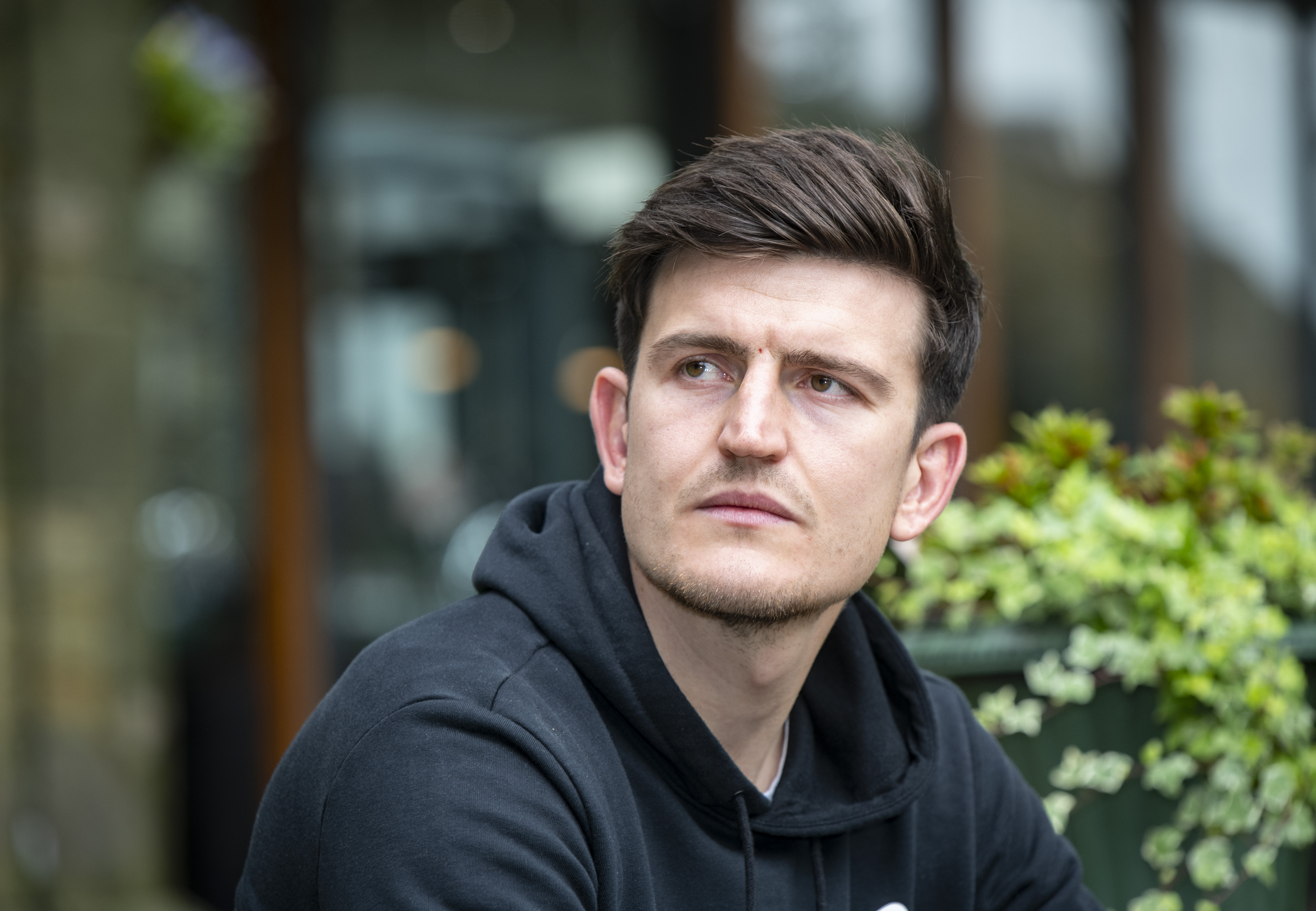 Harry was shocked by the footage of marauding yobs at the groundCredit: News Group Newspapers Ltd