Because if anyone is unsure what a bottle job is, look no further.

Arsenal’s hopes of Champions League football are hanging on a knife edgeCredit: Reuters 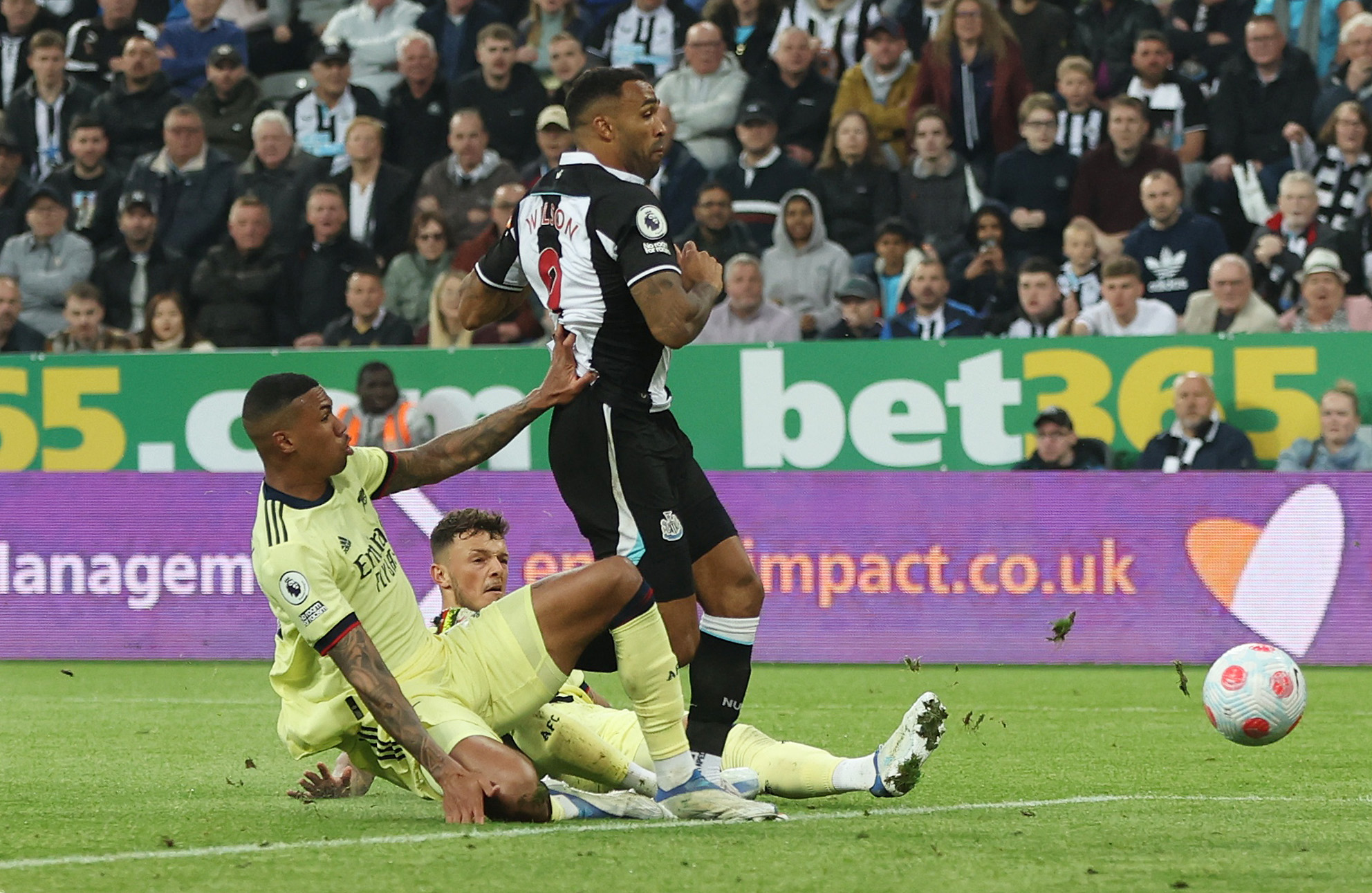 A second-half own goal from Ben White did the damage at St James ParkCredit: REUTERS 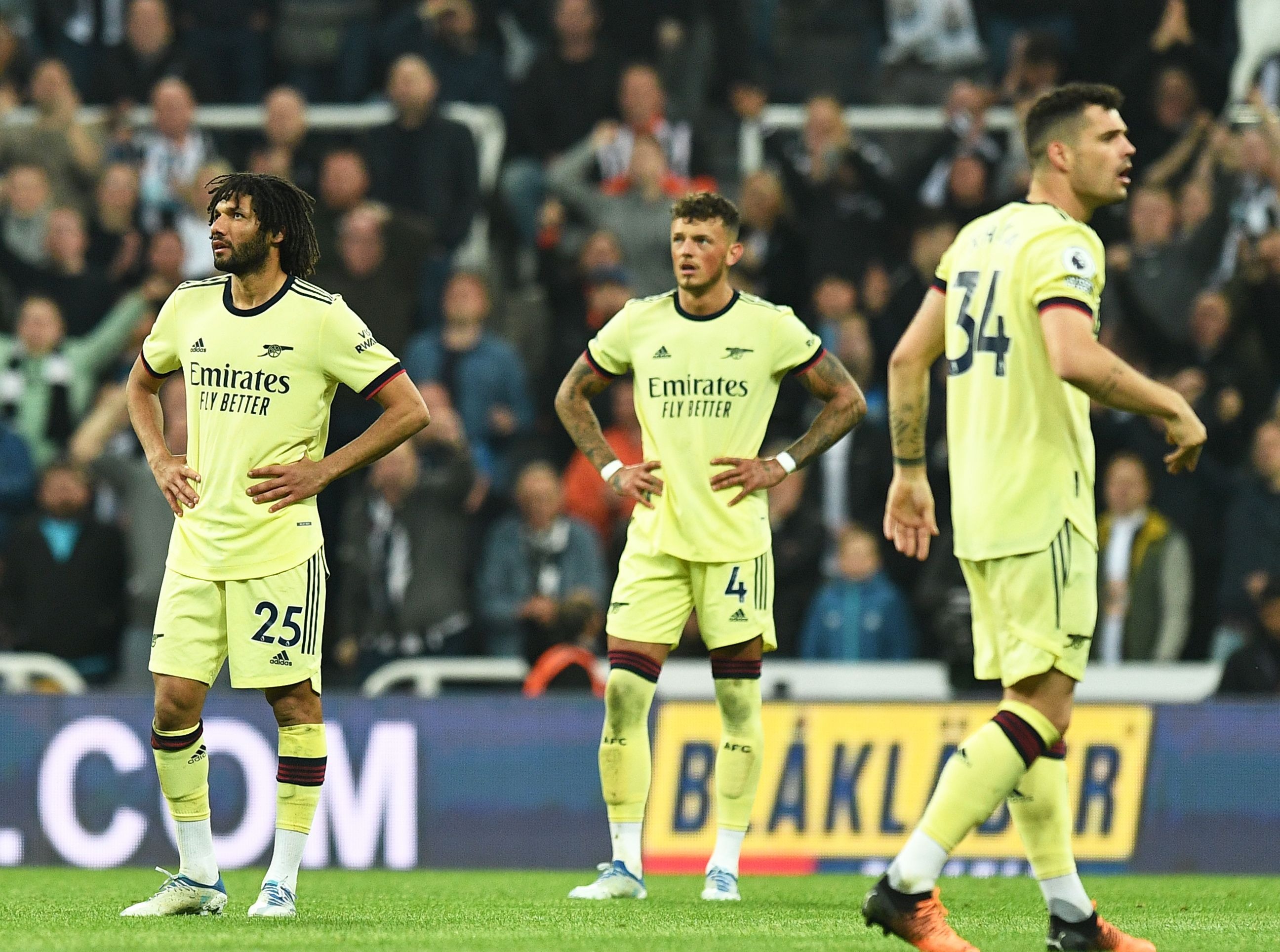 The Gunners are now relying on Norwich beating Tottenham on the final day of the seasonCredit: REX

In Arsenal’s biggest game for years, Mikel Arteta’s side choked.

Yes, nobody expected them to qualify for the Champions League this season.

But having got themselves into pole position to get back into Europe’s elite for the first time since 2016-17, this has been a capitulation of epic proportions if Tottenham avoid defeat at relegated Norwich on Sunday.

As the gloating Toon Army sang after Bruno Guimaraes made it 2-0 following Ben White’s fitting own goal, “Champions League, you’re having a laugh.” 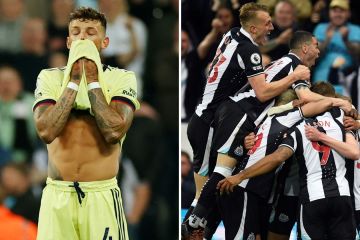 Newcastle battered the north Londoners from pillar to post from start to finish.

And unless Spurs take ‘Spursiness’ to a whole new level, this embarrassing night will not be forgotten in a hurry.

In mid-March, the Gunners sat pretty in fourth, six points ahead of Tottenham with a game in hand.

Since then, as the pressure ramped up, they have lost six of their last 11.

“A DAGGER TO THE HEART OF ARSENAL, A HUGE BOOST FOR TOTTENHAM HOTSPUR”

Three defeats on the bounce against Crystal Palace, Brighton and Southampton were bad enough, but they recovered and put themselves back in charge of the race for fourth.

It was even still in their hands after that 3-0 mauling at Spurs last week.

But then they came to St James’ Park, against a side with nothing to play for, and stunk the place out.

This was do or die, a game they had to win to stay in control of their own destiny heading into the final game against Everton, and they crumbled.

In the first half, they completed 83 passes….their second-lowest total recorded in 18 years!

And from there, it only got worse as Newcastle scored two second-half goals to leave a crestfallen Arteta unsure where to look inside a frenzied St James’ Park.

Gunners supporters fretting over a makeshift defence for this monster clash were buoyant an hour before kick-off with Gabriel – injured in last week’s humbling at Spurs – and White both fit to start at centre back.

But if the travelling supporters thought that would tighten them up, they were in for a rude awakening.

With relegation fears long gone on Tyneside, the Toon Army was intent on an almighty knees-up for their final home game.

St James’ Park has been awash with colour and noise before every match since last October’s transformative takeover, but this – with Ant and Dec watching on – was something else.

After folding inside Tottenham’s bear pit, it quickly became a question of whether the Gooners would wilt again in a red-hot atmosphere.

Led by the possessed Wilson – making his first start of 2022- up top, the pumped-up Magpies were all over them.

The hosts may not have had anything on the line, but they were ones you’d think were chasing the Champions League.

Their best early chance came when the silky smooth Bruno Guimaraes slid a lovely through ball to Sean Longstaff, who hammered across goal with Gabriel desperately scrambling away as Wilson lurked for a tap in.

The Toon were never going to be able to keep up the unrelenting tempo – especially after Wilson required emergency treatment with his front tooth hanging out after a clash.

Bukayo Saka was at least offering something of a threat for Arsenal, but Mags stopper Martin Dubravka had as easy a first half as he has had all season.

Arteta looked as shell shocked on the sidelines as his side wilted under the Toon pressure. 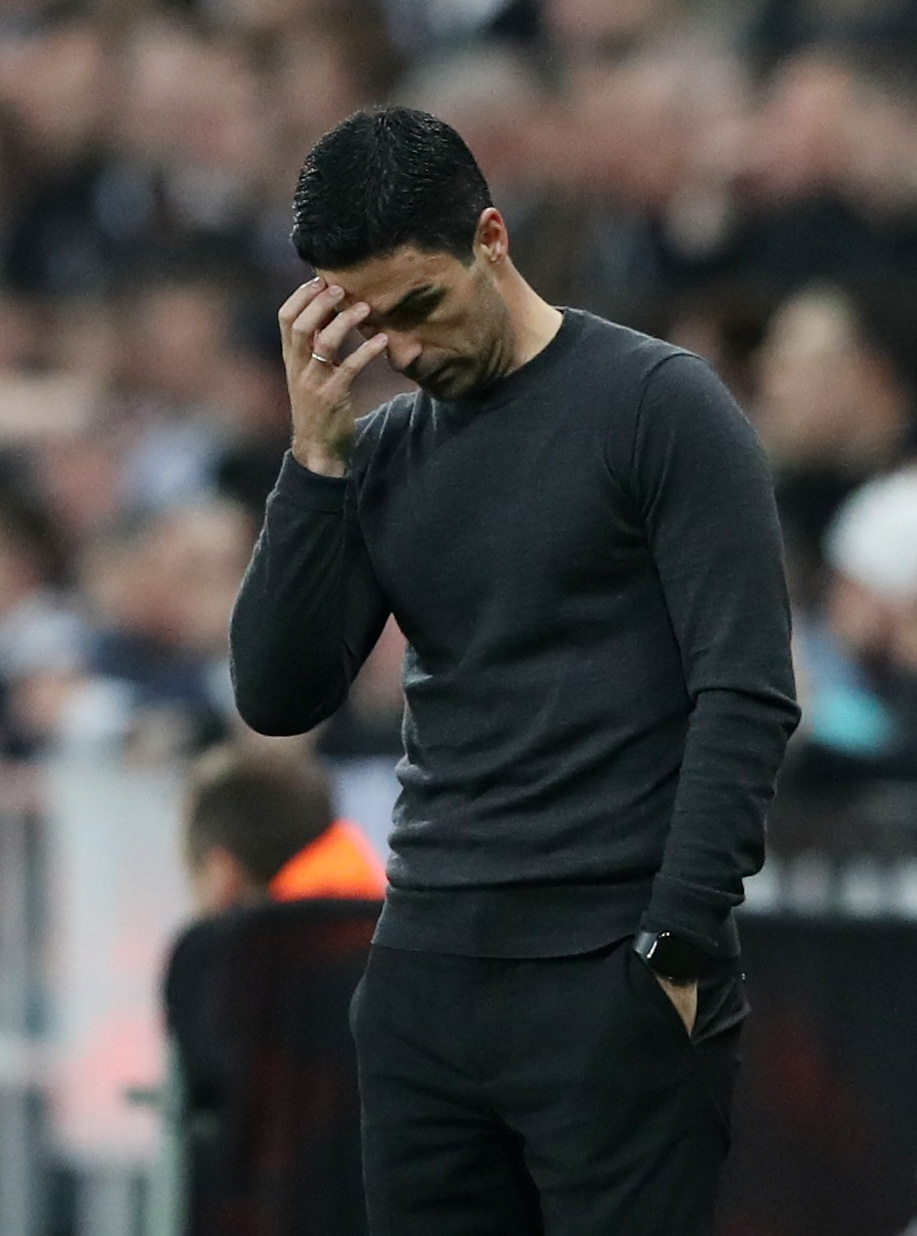 Mikel Arteta cut a frustrated figure for large portions of the matchCredit: REITERS

Bruno Guimaraes compounded Arteta’s misery in the closing stages of the matchCredit: AFP

Right-back Takehiro Tomiyasu was having a mare up against livewire winger Allan Saint-Maximin.

And the increasingly worried Arteta had seen enough when the Frenchman skipped inside the Japanese defender like he wasn’t there before forcing Ramsdale into a smart stop, hooking him for Cedric Soares six minutes before the break.

Newcastle, hardly known for bossing the ball, enjoyed 67 per cent possession in the first half…surely Arsenal could not be as bad in the second?

Mags defender Fabian Schar was forced off seconds after the restart when Eddie Nketiah clattered into him going for a 50/50.

But nothing – including this woeful Arsenal side – was going to halt the Toon express.

The opener came 56 minutes in – and it just had to be an own goal.

Saint-Maximin set Joelinton free into acres of space down the left.

The Brazilian powered on down the wing and played a lovely low ball to Wilson, who was set to sweep it home from six yards out before White intervened and spooned it beyond Ramsdale.

And there was absolutely no response from Arsenal at all as Newcastle missed chance after chance before new Geordie messiah Bruno slotted into an empty net late on with Arsenal’s ‘defence’ all over the place to send St James’ Park wild.